In the deepest, darkest valley in High Rock, there lies an ancient, crumbling castle, standing proud in all of it's unholy glory. It looms over the surrounding area and smothers the light with unease. Legends say it holds all kind of wretched abominations, flesh monsters and legions of the damned. Legends say one of the damned rule them all. For as long as anyone can remember, the ancient Belmont bloodline of vampire hunters have sent thir young and brave to slay these filthy beasts. Every time they march proudly into that ruin, heads held high with rightous confidence. Every time, they never return.

Now, terrifying news of a plague of ancient vampires in Skyrim have reached the commoners of this god forsaken valley, and they have reached the ear of the king of the damned himself. Whether through kinship, pride or respect, the Lord had decided to extend his hand to his ancient brethren personally, and bring Bal's chosen together, so they may feast and rule in eternity.

The castle now lies empty, and the brief hope and celebration felt by the commoners has been replaced with hushed whispers and a deep sense of impending dread.

The Lord of Shadows The main idea/inspiration for this build is Dracula from the original Castlevania, and molds it's playsyle around his bossfight/general theme. What we have as a result is a master of evasion, an elusive caster who teleports around the battlefield, vanishing into mist all the while sending demons to harass their enemies or peppering them with fireballs from a hidden position. 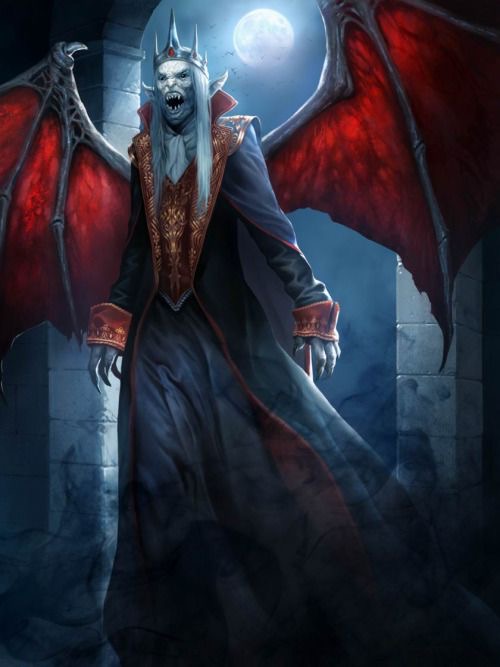 Difficulty: Master, until you get wicked wind. After that go legendary, or alternatively enjoy playing Milkdrinker's first point and click adventure.

Race: High Elf -  Perfect for playing a smug, annoying immortal wizard, with good lore and a fat magicka boost. Make sure to make your count look  clean and courtly.

Standing Stone:  Atronach - Another 50 magicka is always useful along with 50% magicka absorbtion to boot.  The -50% magicka regen isnt a huge problem for us as we don't regenerate magicka in sunlight, and a few of our perks and gear mitigate this anyway. Note -  If you don't have the unnoficial patch for some reason, you might want to switch this out for the Lord stone as it can make you eat your summons.

Stats:      3:1  magicka to health - This build becomes nigh untouchable if you play smart, so a lot of health isn't necessary. Magicka on the other hand, is always in demand and the more you can get, the better. 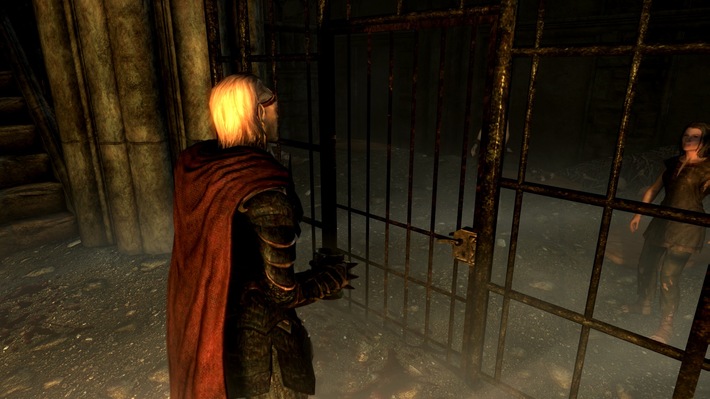 Vampire Gloves enchanted with Deadly Reach: Deadly Reach is the keystone of this build, and allows for all location based spells (i.e. conjure spells, fire runes and wicked wind) to be cast at any distance.

Ring of the Erudite

A pretty standard loadout, but it looks cool and is extremely effective for our needs, and it's low armor rating is offset by your telepotation, minions, stealth,  and fear effects so it wont make a difference. At the start of the game I recommend LA gauntlets and boots and the best mage robes you can find until getting the gear above.

Using two features, thsi build can instantly teleport to any place it can see. This is done by using the wicked wind (detailed below) power while under the effect of the deadly reach enchantment. This can be used to reposition, climb building and overrall is quite exploitable. 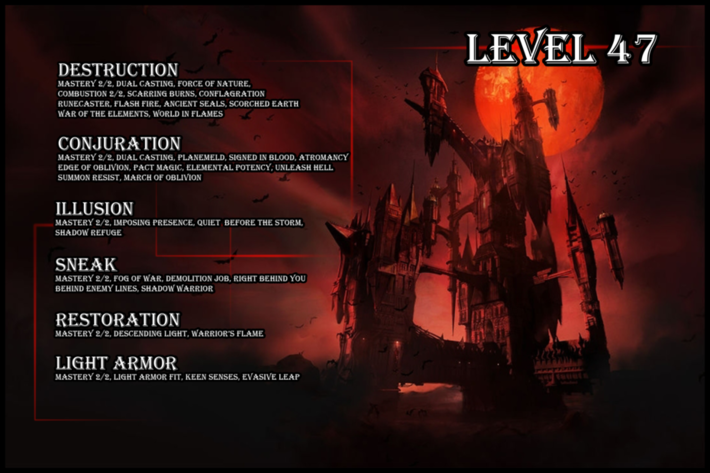 Destruction:  Our main form of offense and what we generally use for obliterating our enemies from a comfortable distance and general crowd control

Conjuration:  Used to conjure minions to distract enemies from us and ensure they never get within a continent of us.

Illusion: Mainly used for quietly casting our spells, with extra utility from invisibility and buffing our vampire's seduction

Sneak: One of our main skills, making sure our enemies never have a chance to hit us or a chance against our flames.

Light Armor:  Our least important skill, here to give us a little bit of padding and help us dodge even more

Blood, bile and everything vile:

With sacrosanct, you will gain a multitude of beneficial features when you begin your life as a vampire, it's a great mod and I highly recommend it for anyone playing a vampire as it gives you lots of grat passives and abilities to make you feel like a creature of the night. Some of the useful features for us are noted below:

With Scarosanct, you gain a vampire bonus based on your race, the high elves gaining wine and revelry:

Wine and Revelry: Feeding increases Magicka by 50 points for 60 seconds (600 seconds if the victim is sleeping)

Also you gain the vampiric age feature, which gives you powers and passives depending on how long you remain a vampire, choosing them after you sleep. Useful ones for us include:

In addition, if you complete the Blue Blood quest given by sacrosanct, you gain the daywalker feature:

Hemomancy: You gain specific blood destruction spells which can be used and fit the character, although they aren't neccessary for the build andI won't be talking about them. "Not exactly fine dining, but I'm willing to experiment"

I've done this to death already, but this build should be played as an evasive support caster, teleporting in and out of battle to support and heal his minions before teleporting away to incinerate enemies from as far away as possible.  You should never be the target of any melee attack and if you are, make sure to teleport away into Cyrodil. You'll want to sneak often to get your damage bonuses, and with all our perks, spells and passives this should be no problem. Your magicka pool, with all our passives and gear should be enormous with plentiful magicka and cost reduction, along with constant magicka regen to keep you going.

Vanish: You quickly dissapear from view, ready to rain down hell from afar

Start of by teleporting away with wicked wind, followed by crouching and casting invisbility. If youre far enough away from any enemies, warrior's flame should only effect you, repleneshing your magicka and allowing you to get back into the fight. Use this whenever you satrt taking damgae or enemies are getting too close.

Bolts From Beyond: Your knowledge of ancient blood magic fuels your flames with the spark of life, vastly increasing your destructive potential

Used to buff our damage spells, Fireballs are to be spammed when at midrange or closerwith our minions, with runes being used to snipe from stealth of from long distance

Proto-Daywalker: Unlike lesser vampires, the sun holds no sway over you, as you draw power from your own foul blood

Descending Light and Warrior's flame ensure your magician is always topped up, while force of nature helps reduce casting costs during the day. This combination keeps us effective in daylight hours until you get daywalker

Dark Armada: Your servants see you for the foul creature you are, spurring them to action against your foes

Start by either using Vanish to teleport to your minions, which will activate Signed in Blood, Unleash Hell and Summon Resistance. After that either spam fireballs if you have a clear line of sight with no allies in the way, or charge a dual cast fireball without letting it go, buffing your minions damage even more and allowing them to take care of it.

As The Lord of Shadows, you are an ancient and bitter creature, although a highly social one. What you're bitter about is up to you to decide, perhaps a scorned lover, a murdered family member or an unjust sentence. The Lord of Shadows views other vampires as brethren, and takes no pleasure in their slaughter. That being said, certain bloodlines deserve more respect than others, and being a vampire does not protect you from his fury. The vampires of Skyrim are a measly and disorganised lot,plagued by constant infighting and the count feels it's his responsibility to whip them into shape. His ultimate goal is to organise the children of the night into one faction and subjugate the foolish blunt-toothed savages. You have come to Skyrim to forge an alliance with the Volikhar Vampires, and The Lord of Shadows will be impressed by Harkon's power, possessions and goals, but he feels he's being too hasty. There is no reason to rush blindly into the waiting pitchforks torches and armies. Time is on their side after all, and fortune favours the patient, a lesson Harkon will learn the hard way. Being immortal is nothing without entertainment however, and The Lord could do some quests to further his power, amuse himself or get a good meal: 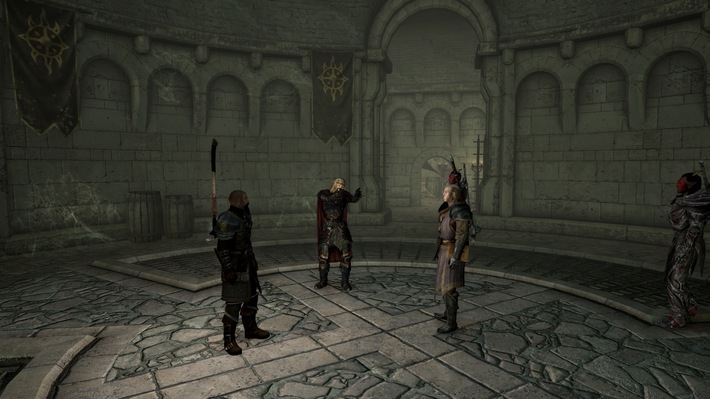 "They're not exactly Belmont calibre"

I've been sitting on the wicked wind synergy for quite some time now and it's good to get it into words, using it can get pretty OP, but also a lot of fun. It's refreshing being able look at any building and being able to climb it and it adds a lot of gameplay variety while also making you nightcrawler from x-men.  If you can't find the Deadly Reach enchantment(it's very rare) I suggest downloading the Summermyst Cheat Chests mod or using console commands

Thanks to Enai Saion for the mods and Curse for the perk spread.

of 2 Next
This reply was deleted.