Grixis mentioned I should put a spoiler notice for Dawnguard. ***SPOILERS***

To preface, this is my first build so if anything I can improve upon please do not hesitate to let me know. I am a bit of a history buff and try to make characters as closely as I can to specific time periods. This particular character is built from Medieval advancements in crossbow technology. Early crossbows were simple in design, and the ones introduced in Dawnguard have a mechanical crank and more sophisticated reload system similar to an arbalest (name of the weapon, not person who shoots crossbows) introduced in the 12th century. Anyway, going beyond the boring history stuff, I will describe my character build.

The Arbalist is a very straightforward character build. It focuses on 4 out of the 6 "Warrior" skills with a few perks into restoration for healing. The character build can be summed up in one sentence: A heavy-armored, crossbow wielding foot soldier that does not need to sneak. Finding this site a few days ago and joining recently, I came across the build The Demonhunter build which is similar, but this character is without all the fancy magic stuff!

The unique aspect that I implemented into the build was the use of a shield. Arbalist's were famous for using what was called a pavise, a large shield to defend from oncoming arrow or crossbow attacks from opposing forces. The shield was rather long and the bottom of it came to a point which made it easy for the crossbowman to shove it into the ground to stand up, leaving both hands to reload his crossbow. Unfortunately, no shields are shaped like this and we are unable to "ground" shields for a barricade, so any shield makes do for what this build needs it for.

The Arbalist favors open spaces and being outdoors. Much of Skyrim is adventuring underground and indoors, so battling with a crossbow can be tough with multiple enemies charging you. Quickly switching to a shield to deliver a few quick bashes or shield charge can level the playing field allowing the crossbowman to gain the distance advantage yet again. It also allows for the free hand to heal if needed.

For this character, I went for a straight ahead foot soldier warrior by choosing Imperial. The Imperials had the most skills boosted at the beginning, save for archery, with bonuses in block, heavy armor, and restoration. Voice of the Emperor can also help in emergencies where you are overwhelmed by too many enemies and do not yet have shield charge.

You could truly pick any other race for good reasons. Bosmer for archery boost, Breton for resists, Orc for more damage, and so on. Again, I am a history buff, so Imperial kind of fit with what I wanted for roleplaying aspects of the character.

To present some of the specifics of the build, I try to think of two "modes" this character has: Offensive and Defensive/Recovery.

Archery - You all saw this one coming right? Skill that governs damage and other important aspects of wielding a crossbow. I maxed out this tree except for Steady Hand and Critical shot only got one.

Smithing - I could just as well add this to Defensive skills, but this improves the build's survivability and therefore augments damage output.

Heavy Armor - The first tier of protection for the build. Being mobile is important, and I utilize the Steed standing stone to help with movement until I grab the conditioning perk sometime soon.

Block - The Arbalist's "pavise". The whole tree is helpful in defending against targets that rush your position. Bash perks to quickly get away from enemies, deflect arrows, and the almighty shield charge to lay waste to groups of bad guys and then pick them off.

Restoration - Important for any combat oriented character. Quick healing spells are invaluable for the eventual damage you are going to take.

http://skyrimcalculator.com/#154650 for a complete look

Feet - Steel Plated Boots. They just look cool. And I would imagine heavy boots makes for "digging in" for a crossbow battle a bit easier.

Rings/Amulet - I aim for anything that increases health or stamina.

Bolts - There is a lot of fun to be had with the exploding bolts that are offered in Dawnguard. I only use exploding fire bolts to keep true to the role-play, as later on in history archers and arbalists used powder charges on lit arrows and bolts. 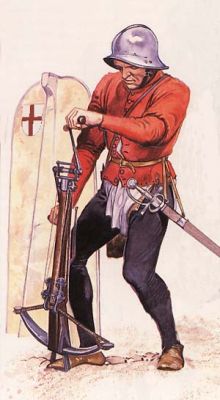 With the skills and perks I use and plan to use, the gameplay is very fast paced. Crossbows are great for staggering enemies, so them getting close is rare when one on one. Multiple enemies are a threat and using a few quick shield bashes and shield charges solve this. I loved shields so much, I just had to incorporate using one into a build.

Having the archery perks directly transfer to crossbows is the main idea for the build. Quicker reloads, better stagger chance, and more damage make crossbows deadly in any situation.

In retrospect, I could have gone with a few perks into sneak for a first strike against groups. I also might eventually invest in enchanting for the sole purpose of added fire damage. Lit arrows and bolts were deadly throughout history and lighting enemies on fire from afar would be really great. No snakes aLive also mentioned adding alchemy to the build, which I might play around with. Weakness to fire potions combined with fire damage bolts or exploding fire bolts would prove extremely effective! Thank you for that tip!

Well that is all I have for this character build. This site has been great to read and some awesome artwork! I tried to add some cool pictures. I hope anyone reading this tries this build and has fun.