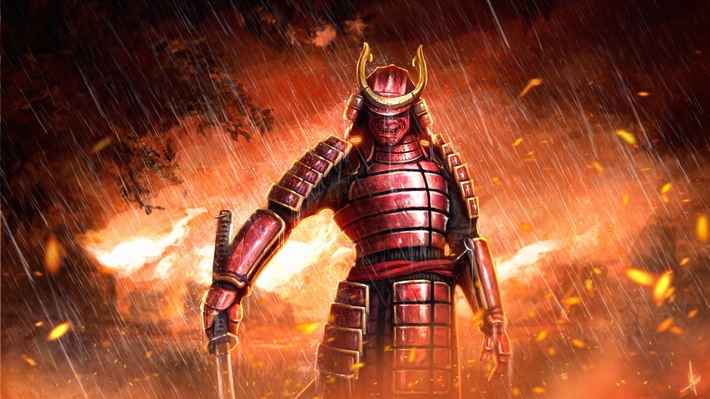 After years of exploring Skyforge's character builds as inspirations for my own characters, I am ever so excited to add my very first formal build to the Skyforge's collection! I'm sure this won't be perfect, but I think I've assembled an infectiously fun build full of fiery flavor that's straightforward enough for anyone to play.

The Cinder Samurai creation stemmed from a desire to use Apocalypse and Ordinator mechanics to create a warrior with deeply integrated fire magic but who never directly casts spells. Particularly, this build heavily utilizes what I think is one of the coolest Ordinator perks, but I don't see much praise for -- Spellscribe. I also strongly encourage the player to use an enchantment effects mod of their choice with this character that will make his signature nodachi appear to actually ignite as he unsheaths it. Hurling fireballs out of a sword is one thing, but hurling fireballs from a flaming sword really brings the frosting to the cake, agreed?

A little bit about my playstyle, as this is my first ever build -- flavor is #1 priority for me in designing a character. I don't worry much about lore or roleplay, though I do try to attach backstories to my characters that inspire the general feel of the build. I'll frequently make moderate to heavy use of mods to open up new playstyles, and particularly like combining mechanics that aren't usually paired together to create unique effects.

With that, allow me to introduce the Cinder Samurai! 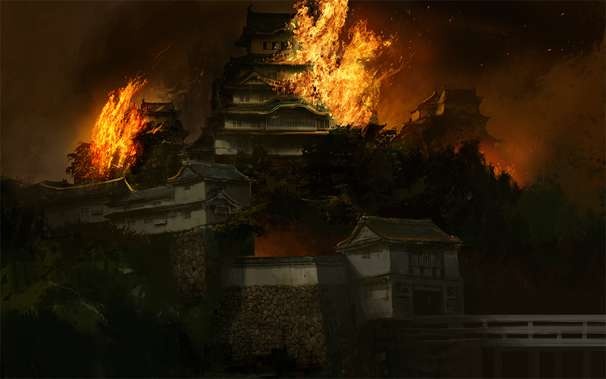 Ahketti stared in horror at the pillars of dust and smoke rising into the night sky. The monastery, the training grounds, all of it gone. Thirty-three years of his life destroyed and scattered as ashes on the wind. The irony could not have been more obvious. What better method for a monastery teaching the Way of the Flame to meet its end than in an infernal blaze? Surely the perpetrators had seen the irony and thought it to be a clever joke -- a joke that they would eternally regret once Ahketti had his vengeance.

A shriek of agony from within. Someone was still alive! Time seemed to slow around Ahketti as he pictured the pure white flame blazing in a void of darkness and embraced the Way of the Flame. He took off at a dash into the ashen ruins, the air ringing with the familiar metallic chime as he unsheathed his nodachi. If it was the voice of one of his mentors on the brink of death, there was not a second to waste.

The air clouded with smoke, Ahketti danced from shadow to shadow listening for any sounds of life left in the collapsing ruin. He could barely recognize the blackened, burning walls as ones that had flanked familiar living quarters only a day prior. Another yell from sixty feet ahead on the left. Ahketti lunged forward and leapt through what used to be the doors to the Hall of Diligence, and there amidst the rubble lay Grandkeeper Sahrakett. Even through his layered garments, his right side was soaked crimson.

Ahketti rushed to where he lay and knelt, keen eye appraising his condition, but the image painted only a grim fate. Grandkeeper Sahrakett shifted his head to gaze up at Ahketti.

"It's too late, child." His voice groaned with the weight of his battleworn lifetime. "I fear none of the others made it out, and I've seen enough death in my days to know that mine is fated for this night as well. The Far Shores await."

Ahketti's head shook frantically as he blinked back panicked tears for his mentor. "No, no, Tall Papa will preserve you. I can carry you. I can..."

His voice trailed off as Sahrakett shifted his gaze again to where his own nodachi lay on the floor beside him. Its gracefully arcing steel glinted orange and gold in the firelight. "Take it," Sahrakett grunted through pained breath. "Take Cinderstorm. Though the forge blessing may not work in your hand, you can still study it. And one day when you're ready, you'll forge your own -- a blade that will dance in your hands with a storm of ashen fury."

Ahketti trembled. "But... I'm only an apprentice, how can I grow in the Way of the Flame without you to teach me?"

"There is only so much of the Way that anyone can teach. The rest must be learned through practice, through mistakes and through triumphs. You're as ready to learn the rest on your own as an apprentice could possibly be."

Ahketti's shaking hand reached out and limply embraced the hilt of the blade. He turned back to Sahrakett feeling his jaw begin to steady. "I'll find whoever did this. I'll master the Way of the Flame and I'll burn them to cinders. The Far Shores will resound with the cheers of those we've lost."

Sahrakett's green eyes stared back at him, bold with approval. "I'd expect no less from my favorite apprentice."

As the faintest glow of dusk rose over the ruins of Mortakal Monastery, not a sound was to be heard but the lone footsteps of a warrior with fire in his eyes. The Mission: The rest of his order now lost, the Cinder Samurai seeks to master the ancient art of the Way of the Flame on his own and forge the ultimate blade -- Cinderstorm. 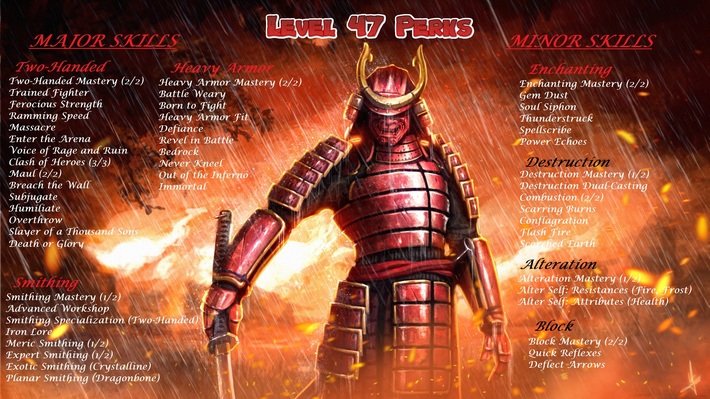 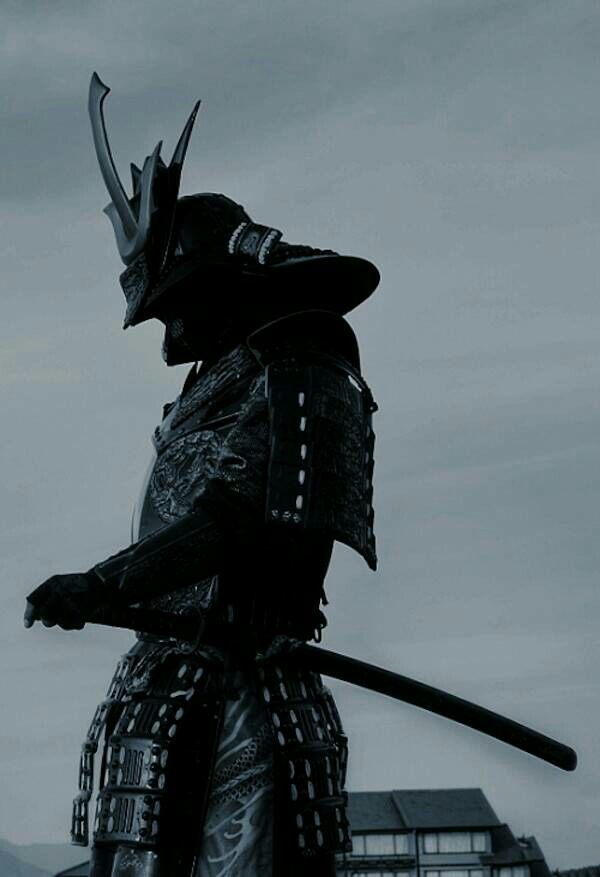 Two-Handed - A master of the nodachi arts, the Cinder Samurai's array of greatsword techniques can decimate even a peerlessly armored foe.

Heavy Armor - His armor forged with the ancient methods of his Order, the Cinder Samurai can withstand the most daunting of blows with ease.

Smithing - As is tradition for those studying the Way of the Flame, the Cinder Samurai seeks mastery of the smithing arts so he can forge his own legendary nodachi -- Cinderstorm. 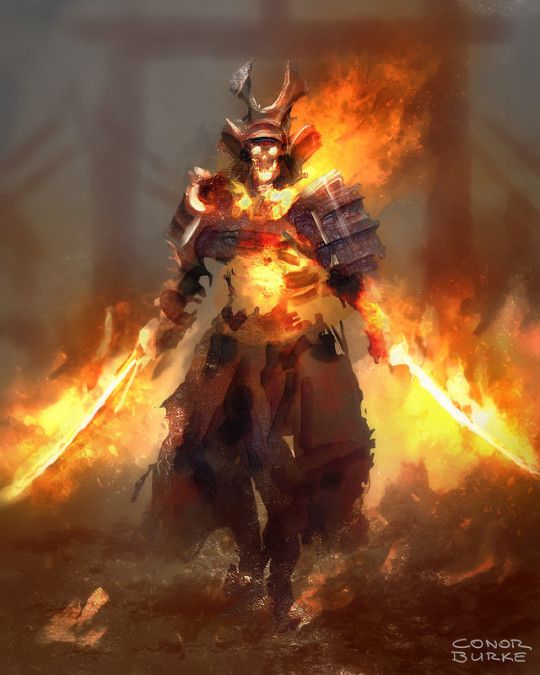 Enchanting - With a deep attunement to the Way of the Flame, the Cinder Samurai channels fire magic through his nodachi to incinerate his foes.

Destruction - Though he's certainly no wizard, the might of the Cinder Samurai's soul-empowered fire magic is enough to leave any mage in awe.

Alteration - Alteration serves as the source of the Cinder Samuri's time-slowing magic and allows him to empower his body and mind.

Block - Neither blade nor arrow can impede the Cinder Samurai's path when his senses are sharp and his reflexes swift.

A core aspect of this build is that it uses deeply integrated fire magic but never directly casts spells in combat (hence the 0 level-ups given to Magicka). Here I'll highlight the short list of spells you'll need to acheive this. 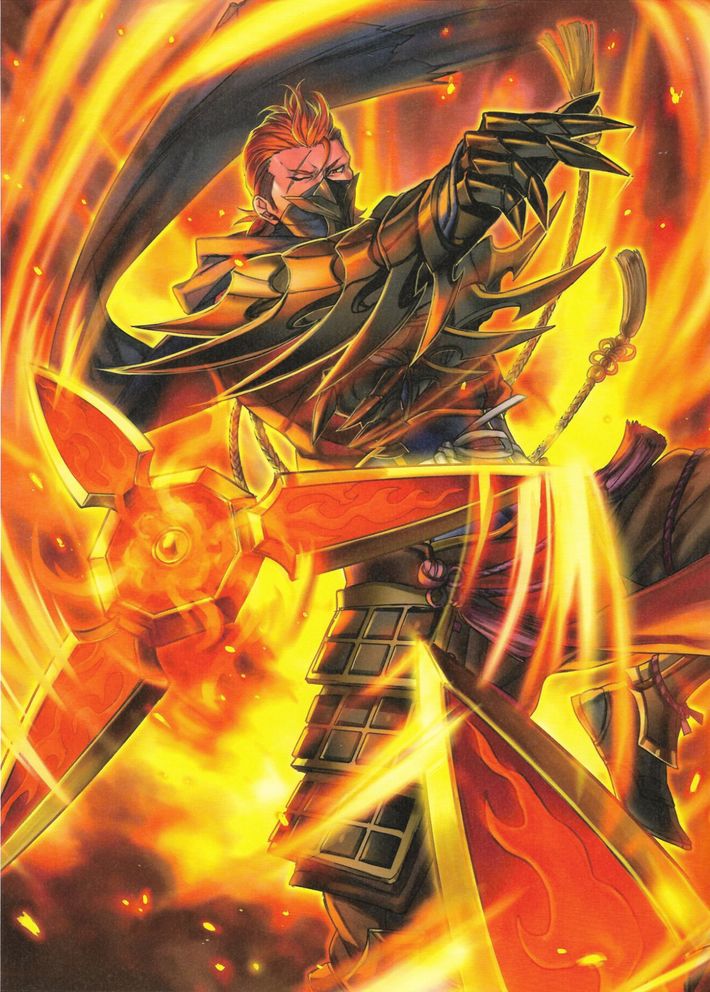 Brimstone Strike - Spellscribe + Flaming Lavastone + Power Echoes + Destruction Perks
-The Cinder Samurai's ultimate ranged attack. Sweeping Cinderstorm downward in an arcing motion, the Cinder Samurai hurls a brimstone meteor towards his target where it explodes and ignites the ground beneath his foes.

Ashen Fury - Enter the Arena + Massacre + Voice of Rage and Ruin + Adrenaline Rush (equipped)
-Enter the Arena guarantees that Massacre procs with the first two-handed swing of battle, nearly doubling the Cinder Samurai's attack speed, and each swing has a chance to activate Adrenaline Rush. The Cinder Samurai then sprints from foe to foe, assaulting them with chains of rapid strikes, stacking fire damage and decimating them one by one.

Momentous Assault - Quick Reflexes + Overthrow + Maul
-Skillful and swift, the Cinder Samurai uses his most powerful enemies' momentum against them. Time slows as the Cinder Samurai blocks his foes' power attacks with Cinderstorm, then retaliates with his own enhanced power attack. This ferocious strike deals critical damage, disarms, and destabilizes his foe for increased attack damage from regular strikes for the next 5 seconds.

Transcendence - Glimpse the Shores + Death or Glory
-When he reaches 0 HP, the Cinder Samurai's Favor with Tall Papa keeps him tethered to the mortal plane as he unleashes one final barrage of power attacks on his foe. Because his HP is near 0, Death or Glory boosts each power attack to nearly double damage for a truly ferocious assault. The roleplay and quest objectives can be really flexible with this character, and roleplay isn't my top priority with character building. Generally upholding the law, punishing wrongdoers, and seeking to prove one's honor are all goals in line with the virtues held by those studying the Way of the Flame.

You can also devise a storyline involving the destruction of the Cinder Samurai's monastery and decide that one of the many antagonistic entities in Skyrim was responsible. The Cinder Samurai is always pursuing opportunities to hone his skills, so he seldom turns down a challenge that aligns with the moral good.

This build is intended to create a fighting style that uses only a few core mechanics but acheives a flexible (and outrageously fun!) playstyle. Magic is integrated into nearly every aspect of combat without the Cinder Samurai ever directly casting spells.

As an enemy approaches, Way of the Flame grants the Cinder Samurai his signature cloak of fire while granting him extra time to strategize. Should he sprint towards his foes to engage them in melee combat, or attack from afar with Brimstone Strike?

Close up, encounters become a complex dance of well-timed blocks and power attacks that debuff his foes. With Brimstone Strike activating even on melee power attacks, lesser enemies clustering around the Cinder Samurai get caught in the explosions and frequently burn to death in the fire storm cloak before the Cinder Samurai need even spare a thought for them.

When all hope seems lost, Transcendence grants the Cinder Samurai a last resort for winning fights even after death. One of my favorite parts of gameplay was during these last 20-some seconds before the fight was lost, desperately launching power attack after power attack at my foes to end combat in the final seconds before the Cinder Samurai would be lost to the Far Shores forever.

Keeping in mind that the build uses neither Alchemy nor Restoration, make sure you have healing potions on hand or you may be paying more visits to the Far Shores than intended...

This build is for a non-Dragonborn character, but playing as a Dragonborn with access to Shouts would open up new possibilities, specifically for the Ashen Fury ability.

Voice of Rage and Ruin gives two-handed attacks a chance to activate your currently equipped power, so instead of equipping Adrenaline Rush a Dragonborn character might equip a Shout. Some possibilities include Elemental Fury for even faster Cinderstorm strikes, Slow Time for additional blurs of lightning-fast motion, or Fire Breath for some rather literal ashen fury. There are also some Black Book powers that could be appealing to use.

Below is a short sample of how one fight might be played, featuring Way of the Flame and Brimstone Strike rather prominently. 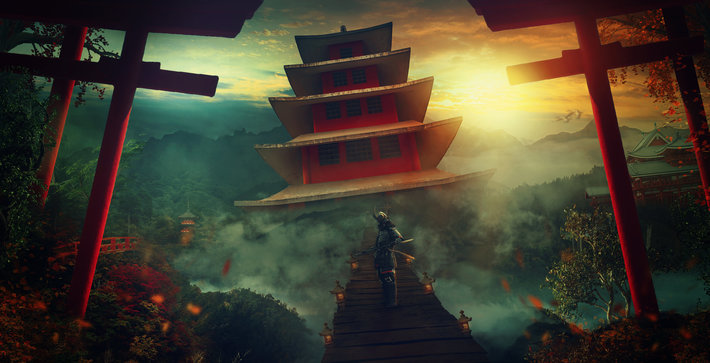 This was so much fun to put together! Honestly just looking at how beautiful the perk spread turned out makes me giddy! Hopefully all the formatting looks alright after I post this... I'll try to get better in the future at "prettifying" the layouts.

Thanks for reading if you made it this far! I hope you have as much fun with this build as I did, and I hope to share more creations with you all in the future!