This build came from 4 things originally - the awesome look of the Vampire armor sets, wanting to make a viable non-stealth dagger only build, the awesome look of the Dragon Priest Dagger, and a build that really utilizes Enchanting and isn't broken as hell (but this one ended up being broken anyway). Unfortunately for PS3 players it does utilize quite a bit of Dawnguard content, though there is some easy ways around it. Thus I present: The Soulknife is a powerful enchanter, cunning duelist, and expert mage. Imbuing a wide array of effects into his daggers and armor, no foe is safe from the Soulknife's wrath. As the name suggests, he also utlizes Conjuration magic to steal the souls of his foes, as well as raise the dead, or in the case of some more powerful Soulknives, minions from the Soul Cairn. His knowledge of Destruction magic enhances both the efficiency and power of his blades, and Restoration to ensure he remains alive through healing and wards. In addition, he is skilled in the use of Light Armor and is able to strike rapidly with his dual daggers.

Some Soulknives choose the become Vampires to increase their power, and if given the rare opportunity to become a Vampire Lord it can increase their ranged combat ability.

Recommended Race:Dunmer. Their Destruction boost early on is a great aid as Destruction spells themselves are seldom used, plus if you're a Vampire they help counteract the fire weakness. Argonians (hi there Emer), Bretons and Imperials also make good choices.

Stats:1/2/0 in Magicka/Health/Stamina. The Soulknife is a melee combatant using Light Armor, so health is essential. As he is also a spellcaster a good magicka score helps too. 100 Stamina is a servicable amount; you can attack quicker with standard attacks.

Stone:I went with the Mage for Enchanting experience. Later on you may wish to take the Lord Stone to augment your protection.

Enchanting:The core of the Soulknife's arsenal. This skill allows him to place a huge variety of magical effects on his daggers, effectively duplicating the powers of many magic schools. To a lesser extent he can improve his armor to augment his toughness and spell efficiency. Key perks are pretty much everything minus Soul Siphon and Corpus Enchanter.

Conjuration:The Conjuration school possesses great value for a Soulknife, allowing him to both steal the souls of his foes and conjure/raise minions to aid him. The Necromancy perks also affect the Soul Cairn summons, so either way key perks are just up to Expert Conjuration and Twin Souls. The Soulknife relies primarily on his summons for ranged combat

Just a quick note, to train Destruction up to the necessary levels you can just use Novice-level spells until 30, and I used a combination of training with Enchanting money and farming with Shock Rune (Destruction XP is based on the base magicka of the spell cast and the number of targets hit).

Restoration:A little Restoration magic helps to keep the Soulknife alive. Key perks are just up to Apprentice Restoration, Regeneration, and if you're a Vampire, Necromage. If you don't already know, Vampirism flags the player as undead, making all buffs 25% more effective.

One Handed:The Soulknife is a master of his favoured weapon, the dagger. Training in one-handed allows the Soulknife to maximize damage output with both ranks of the Dual Flurry perks.

Light Armor:The Soulknife's armor is valuable protection in melee combat. This doesn't need to be heavily perked, and I just took the armor rating boosting ones. If you're not using the Dawnguard vampire armor, you could possibly go through the matching set perk to Deft Movement.

A bit for the roleplayer:

I played my Soulknife as a Neutral Evil character - he took manipulated others with his Vampiric powers and was always on the search for more souls to devour. His search for power lead him to Castle Volkihar, where he furthered his standing in Skyrim. He had a fascination with the Soul Cairn travelling there frequently to harvest souls to further his studies in Enchanting, and learned how to conjure minions from there.

Of course it's perfectly possible to play the Soulknife as a non-evil build, avoiding Vampirism and only trapping the souls of creatures and evil people.

The Soulknife's enchanting prowess allows him to create powerful equipment. The following gear is for after I acquiried the Extra Effect perk; beforehand simply pick the effect you prefer. Of course, you're free to make up your own:

The Black Star is absolutely essential, which allows quick recharging from any source, as it can hold any type of soul.

The Soulknife wields a wide array of daggers to suit every situation - I used the badass Dragon Priest Dagger. A good place to find them is in Forelhost - I picked up 5 there, 1 from the College, and 1 from Castle Volkihar. These are after I got Extra Effect, all the weapon enchanting perks and Augment perks. Keep in mind you don't need the Augment perks to enchant an item at max power, those can be gotten later. Having an elemental effect you have the Augment perk for on a weapon also increases the magnitude of all other effects on the weapon (which stacks with itself for 2 elemental damage types).

The badass Dragon Priest dagger, our weapon of choice

Designed to cause the maximum amount of pain to the target, the searing blade inflicts both Fire and Shock damage. This should be your main-hand weapon and primary damage-dealing tool.

This is a very efficient weapon, designed to cut through any defense. Very very few enemies have resistance to either the Silent Moon Enchant or Shock Damage. A good off-hand weapon for when you need tons of damage. Keep in mind it only works between 9 PM and 5 AM. (Note: Supposedly it's bugged as of patch 1.7.7. If you're on PC the Unofficial Patch fixes this.)

An ideal offhand weapon, the Dagger of Dominance allows the user to strike quickly for a paralyzing attack. While it has a short duration, this increases the charges drastically, and it still takes the target a few seconds to regain their footing - a time in which the Soulknife is sure to gravely wound them.

The Blade of Turning isn't a damage dealing weapon, but can really help the Soulknife against powerful mages and undead, rendering Daedra and Undead useless. Quickly pull this out in your offhand before switching back to something more appropriate.

The bane of magic users everywhere, the Minddrinker Blade removes a whopping 62 points of magicka with every strike, 25 of those returning to the Soulknife. If you like, you can swap out the Absorb effect for Shock Damage. Hitting a mage with this a few times will empty their magicka pool, which seems to confuse the mage AI. Be sure to land a few attacks with the Searing Blade/Nightbringer! Also, if you do the College questline, the Drainspell Bow effect is seperate, allowing you to have 2 Absorb Magicka effects on one weapon!

Ideal for when fighting a single tough enemy, your high attack speed and this weapon can keep you alive for quite some time. Stamina absorption helps if you need to escape or get in a few double attacks (see the combat section below).

The chill touch of this weapon sends chills down the spine of any living creature (assuming they have spines). Great for thinning out the ranks in larger fights while you take on more deadly foes, or even use it on those foes themselves - most enemy types don't even level up to 37! You should always open combat with an appropriate summon - either from the Soul Cairn, a necromancy spell, or even an Atronach. Even though it isn't perked they're still quite handy. Since I focused on the Soul Cairn summons, and Necromancy is a bit of 'you take what you get', I'll focus on the Soul Cairn summons here. If you're at range bring out a Boneman or Mistman, taking into account the enemy's defenses (armor, shields, wards, etc), or if you're closer the Wrathman is perfect - once you've got the Dark Souls perk he's ridiculously tough - assuming you're high enough level. I typically enter combat with the Searing Blade in my main hand and either Nightbringer or the Dagger of Dominance in my offhand. The other daggers are more situational but I think you can work out when to use those!

I suggest you avoid the dual dagger power attack for the most part - it looks really cool but it actually decreases your effective attack speed - and you can't stagger with a dagger (heh, that rhymes) anyway. However, once you have a rank in Dual Flurry, you attack so quickly if you do a power attack with one weapon, you score a normal hit before the power attack triggers, and then you get the small power attack speed bonus for your next 2 attacks.

You might have noticed there's no Soul Trap weapon - I prefer to use the spell version to gain more Conjuration experience. Don't forget during ranged combat that you can turn into a Vampire Lord or pull out a staff - it will be quite potent given you have the augment perks. 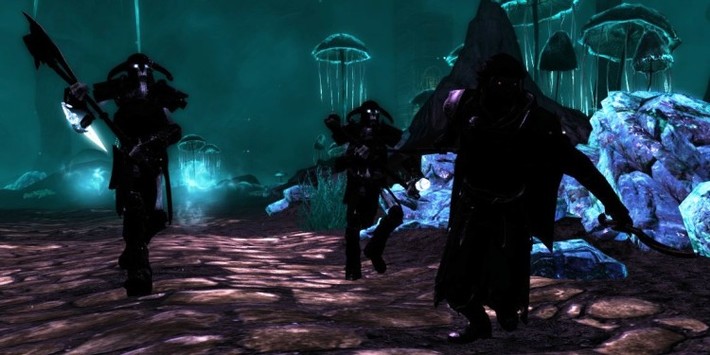 The Dragonborn DLC gives the Soulknife a few more options to further increase his power. Firstly, the Chaos Damage enchantment is utterly ridiculous, being affected by all Augment perks. Place that on a Stalhrim Dagger to increase the damage even further, and maximize it by putting on one of the Elemental Dragon Priest Masks. With Zahkriisos equipped, I managed to make this insane weapon: Well, thanks for reading all - while it is a bit tough going early on, after about level 20 you really get into it. Once you get Extra Effect it just becomes ridiculously powerful - I found it stupidly easy even on Master (which is the difficulty my video is at). And that's why I never perk past Enchanter/Soul Stealer!