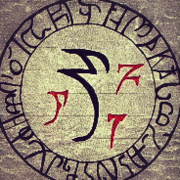 It appears thou hast happen'd upon my humble abode, traveler. Prithee, step into my parlor.

I go by the name of Powersocke Prime, however, I have many names. Mzahngthulish, Tyrhal, Power or Prime are those most frequently used. I am a German in their mid-twenties who loves to read, write and invent crazy alphabets.

I am originally indigenous to the Warframe Fandom Wiki community where I was best known for the way I taught young Tenno the ways of our kin, giving beginner guides and creating warframe guides while simultaneously making warframe concepts I shared. At some point, not sure when, I migrated to the Elder Scrolls Fandom wiki community and soon after, created a character build of a necromancer playable, with a few mods, in TES V: Skyrim. This should be the beginning of my increasingly time consuming hobby as a fanfiction writer.

For soon after I published that build, I wrote my first ever Elder Scrolls fanfiction: The Aquila-Axilius Report. Soon, I would expand upon the concept, weaving tale after tale, publishing chapter after chapter, until the collection of stories now known as 'The Necromancer Cycle' was born. It was not long before I started to have new ideas for a different path in terms of ES fanfiction, at length giving birth to my 'Tales of Darkness'. All of this work has been first published on the Elder Scrolls Fandom wiki where there was also a kind fellow by the name of Kishaxi-Veda who is responsible for the great image in the Tales of Darkness Table of Contents and graciously gave me permission to use his fanart of my story as I see fit.

After a fellow Wikian urged me to branch out, I also began to publish my works on fanfiction.net and DeviantArt. Then I contacted the Tel Mora Independent Press via email and got, after a time, access to their official Discord server where I also publish my stuff. And lastly, Curse was so kind as to make me aware of The Sky Forge and invite me to join the community. This is how I ended up here.

Aside from being an avid fanfiction writer, I also have a knack for gamelangs and conlangs in general. Constructed languages fascinate me. As such, I have, over time, become an expert on the Dwemer language. Under the name of Mzahngthulish on the Imperial Library, I have made a post in which I thoroughly analyzed the language and presented my findings and conclusions. View it here.

I also concerned myself with all other TES languages and alphabets, even the Elder Script.

On a more unrelated note, I have extensive knowledge of all Warframe alphabets, the Orokin Script in particular, which I can fluently read and write.

Apart from my obvious obsession with writing and gaming, I love to read in my free time. The authors I'm currently concerning myself with include H.P. Lovecraft, Edgar Allan Poe and August Derleth. However, Robert E. Howard is also on the list of authors whose works I definitely will check out in the future. And I suppose it is not too far fetched to say that my very own writing has been majorly influenced by these authors. When I don't write, I tend to invent alphabets on my own, oftentimes creating some rudimentary vocabulary for them.

I also publish my tales on other sites!

My accounts on Fanfiction and DeviantArt also include TES unrelated stories such as my Dora the Explorer horror fanfiction 'The Price of Discovery' as well as my Cthulhu Mythos fanfiction 'The First Witch'.

Now then, traveler. Thou hast come far. Prithee, proceed. Thou wilt now enter the domain in which my tales of terror and madness reign supreme. Dost thou dare peek into the shadows?

Right now, my tales consist of two 'paths'. There is the Necromancer Cycle and the Tales of Darkness series, both of which having their own Table of Contents.

The Necromancer Cycle concerns itself with the various stories of different protagonists finding themselves somehow at the hands of the titular necromancer which, more often than not, results in mind shattering events to transpire. For the dark figure is on a mission to serve his god in order to bring about doom to Tamriel.

Tales of Darkness presents a different menace from the far reaches of outer worlds craving to consume Nirn. Yet again, the protagonists meet with adversaries beyond their ability to either comprehend or combat. The Blood Cult involved in this series tries to awaken their very own deity made flesh by cruel rituals and vile processions. The question remains: will anyone be able to stop this antediluvian evil? Time will tell.

All of the stories contained within these two 'paths' can be read in no particular order for they always present a closed storyline within themselves. However, all of them are still linked to one another through hints, easter eggs and subtle references, some of them devilishly difficult to spot. It's all one coherent universe that I'm building. For the future, I plan to create one more 'path' and, at length, make all of the stories come together in an epic display of chaos, called 'The End Time Chronicles'. But in due time.

And for the grand finale, the golden drop of my residence, thou shalt witness the ancient tomes of mystical knowledge. But first, I implore thee to scrutinize the Table of Contents.

View all my stories right here:

The Book of Languages

LHoN: The Horror From Within the Mist

LHoN: The Menace from the Woods

Skytales Event: The Stalker at the Fringe

The Places You're Not Supposed to Visit - Chapter I

The Places You're Not Supposed to Visit - Chapter II

The Places You're Not Supposed to Visit - Chapter III

The Places You're Not Supposed to Visit - Chapter IV

XV If there was a thing I always had been thoroughly bad at, notwithstanding my research into planes of existence that enabled me to utterly vanish as soon as I managed to access them, it was concealment. In conversations I was usually able to hide…
See More

"Thanks man! Although I have to admit it's not my best work ever, I am proud of most of it." DovahzulDovahzul, the language of the ancient Dov, the Dragons. While their terrible rule was nirnwide, no single province had been influenced as much as Skyrim. There, most of the existing word walls can be found and Nords famously learned the ways…
See More

IX There have been but few things in my time as head of the IID that burned themselves into my memory. I remember one such case of a pregnant, Imperial woman who had been hung naked from a tree like a fruit. Her unborn was forced outside to dangle…
See More

XII In retrospect, I should have probably never defied the laws and regulations of the Institute. Some horrible deaths could have been prevented and who knows? Perhaps I could have grown into a proficient teacher myself by now. Or became a scholar…
See More

VI Until the last, I had not known the tragedy that had befallen the kingdom that the three of us had trespassed upon. The reason behind all the rot and decay. I only knew that it stood in connexion to the seal of bone that Nephethys, Shthelith and…
See More

VI Before I speak about my experiences pertaining to the rescue of the three students of the Institute of the Water's Wisdom, who ventured into the depths of the ancient Agea Relle in response to my "wrongdoings", let me clearly state that I had no…
See More

"Indeed, I use nothing but a ruler, pen and ink and my hands to draw all of this. Single-handedly. Thank you for the compliment. :D And I draw it all inside an empty book to have a true book on my shelf one day.
What you've seen in Shalidor's…"

"That is so cool! I always like reading reviews to my stuff because I can learn so much from them. Thanks for taking the time and effort to read this."

"Thank you for these words.
Indeed, the protagonist is deathly afraid.  And he should be. In Shape Your Flesh, the other protagonist is also facing off against such horrors."

VI I turned around, ready to tell of my newfound revelation pertaining to the strange pages, only to find that most of the volumes that had been present fell to dust as Shthelith's relentless trying had transformed the shelves into small deserts of…
See More

"Thank you so much for your review and input!
This really makes my writer's heart sing. :D
I thought I'd try something different and actually choose a different ki d of narrator. I'm glad it worked out the way it did and I'm even more glad you guys…"

"Thank you so much, Curse!
You also have a gift because the kind of builds you make are absolutely suited to concoct a story around them. They're all quite something. "

A member of the official Tel Mora Independent Press Discord server (more specifically, Curse themselves) recommended The Sky Forge to me as a media outlet for my The Elder Scrolls fanfiction.

The Places You're Not Supposed to Visit - Chapter IV