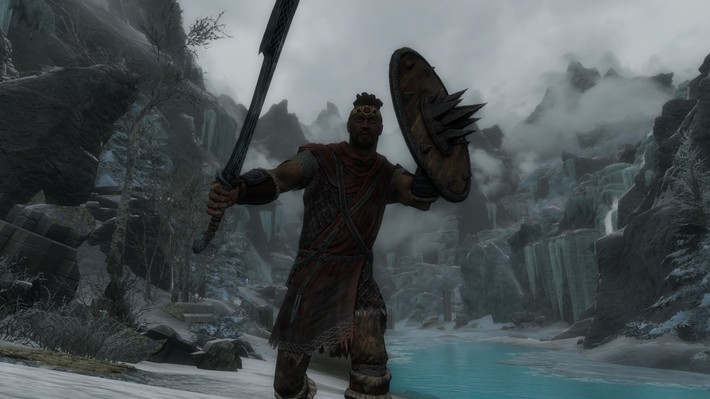 In the aftermath of the fires of the Great War, one former soldier leaves his homeland content to leave war and politics behind him forever. Drifting aimlessly across Tamriel as a wandering sellsword in search of adversity, his travels bring him to Skyrim, where fate confronts him with purpose once again. Not for war, but something far greater.

The Wayfaring Warrior is an agile and ferocious combatant, a fighter relying not on flashy equipment but his own mettle and skill with a sword and shield, augmented by protective magic. He travels the lands in search of worthy foes and coin.

Race: I chose a Redguard. They fit perfectly into everything I wanted to create with this build - the aesthetic, racial bonuses, roleplay and skill boosts, but the concept of a lost warrior isn’t unique to any specific race.

Stone: The Warrior Stone was the most beneficial for this build towards the beginning of the playthrough, later transitioning towards the Lord Stone for it’s defensive bonuses.

Stats: 0M | 2H | 1S - This build only uses one magic school, and doesn’t involve casting many spells with it. However, some minor investment into magicka is needed to meet the minimum requirements for the spells this build uses, but this is only a minor deviation that only needs attention towards the middle of the playthrough, and no more than 6 points need be spent on Magicka. Apart from this, the aforementioned spread is ideal.

One Handed, Block and Light Armour are your key gameplay skills - allowing fast attacks and quick movement while retaining solid defensive capabilities. Alteration provides a boost to our armour and magic resistance to maintain viability into the late game and on higher difficulties. Smithing follows a similar purpose, ensuring our weapons and equipment remain lethal and sturdy respectfully.

The armour and weapons chosen for this build are focused largely around an aesthetic. I wanted to create the look of a fast, fierce, bloodstained and lonely warrior travelling the lands in search of adversity, captured perfectly by the Solitude Guard Armour. I think the lack of a helmet afforded by the Diadem of the Savant synergises well with this too, acting as a sort of ‘warrior crown’ or headband, as well as having a small, but useful bonus. The Targe of the Blooded is on the lower end of defensive capability among shields, but the brutal yet minimalist design secured it a place. The Nordic Sword is a long time favourite of mine. Sleek and visually pleasing with solid stats that allow it to remain viable throughout an entire playthrough. The Scaled Bracers and Boots suited the established aesthetic and also benefit from the same smithing perks as the Nordic Sword.

However, this build isn’t tied to any specific faction, meaning you’re free to mix, match and potentially choose your own armour combination if you find it more suited to your taste. The gameplay aspect of the build is simple and satisfying. Trusty sword-and-board style combat, but just enough vulnerability in the armour to make combat engaging without feeling underpowered. Open every fight with a flesh spell, switch to the shield and then dive into the fray.

The Quick Reflexes perk is a core component to gameplay, allowing you to sidestep incoming power attacks and land a flurry of blows before the opponent has a chance to recover. It’s my favourite perk in the game, purely because it allows you to turn combat from trading hits and  button mashing into something more dynamic and engaging. It also goes a long way in allowing builds with comparatively lower AR to combat even the toughest nasties Skyrim has to offer. Any incoming power attack should be bashed or dodged, both leaving you in an advantageous position.

Archers and mages can be quickly closed in upon thanks to Become Ethereal. One word is all you need to run in and deliver a Critical Charge. After that you’re able to overwhelm them quickly with bashes and attacks of your own. The same can be applied to dragons in some respect, Become Ethereal is a vital asset in combating dragons given the lack of ranged offense. Dragonrend is also extremely useful in fighting dragons for the same reason. When in melee combat with a dragon, you can always interrupt the startup of their breath attacks on reaction with a bash - the animation is fairly telegraphed - leaving only their melee damage to contend with, which is fairly manageable so long as you block appropriately.

Marked For Death is of great assistance when fighting tough foes. You can sick it on Deathlords and Dragon Priests during their ‘rising’ animation safely. The debuffs it applies to enemies should not be understated, ending the fight quickly. Unrelenting Force is very useful when managing groups of opponents, and Elemental Fury allows you to take even the strongest opponent from 100-0 in no time, or cut down a swathe of weaker enemies in the blink of an eye.

I didn’t put any points into Magicka past 160, giving me just enough for a cast of Paralyse when I was near full. I wanted melee combat to be the core focus of the build, but Paralyse can be a useful ‘trick card’ to pull out in tense situations towards the late game, allowing you some breathing room in a group fight.

For healing, I simply used bought or found potions. I assigned them to a keybind and found that combat flowed seamlessly. Cast the flesh spell, switch to the shield on another keybind and anytime I was low on health I had it at the press of a button. It was surprisingly viable given the abundance of potions from vendors and loot - I had 3 dozen plentiful healing potions at Level 35 without any need to grind alchemists for healing items. I played this character with the mantra of ‘A sellsword with a conscience’, meaning I worked for what was right, what earned me gold or what gave me an adventure, but drew the line at mixing with criminal organisations or consorting with Daedra. Essentially, Neutral Good.

I didn’t join the Civil War because I wanted this character to be an ex-soldier who was done with war, but didn’t know what to do with themselves besides fighting, and subsequently became a sellsword. I also didn’t join the Companions because I thought Lycanthropy would be a bit intense for this kind of build. However, both factions make sense to a degree if you wanted to pursue them.

‘Radiant Quests’ might have raised some eyebrows earlier during the build outline. While every build does radiant quests, we usually only do them when we need something out of them. I decided to prioritise them, going after every bandit camp, forsworn conclave and warlock lair I could find. Not only did I come away with a hefty sum of gold, I also came away stronger every time and by the end of my playthrough, the world map was full of discovered locations. It’s the sort of build where you can choose a starting point, point yourself in a direction, get into all kinds of trouble and it sort of makes sense given the wandering concept of the character.

Becoming the Dragonborn gave him a sense of purpose, not felt since his time serving on the battlefield, but this time for reasons greater than politics and petty conflict. Likewise, the decision to join the Dawnguard was based on morality rather than seeking a fortune. Besides, what greater foes to test your blade against than dragons and terrifying ancient vampires?  Whenever I got to a city or town, I spoke to anyone and everyone looking for quests and things to do. There’s all kinds of trouble to be getting into without pursuing factions, which is exactly what I wanted.

I joined the College as a convenience and as part of the Main Quest, simply to gain access to Tolfdir. I didn’t do any of the quests for it. By the end of my playthrough, I had completed the Main Quest, Dawnguard and most of the other quests I had intended to pursue, leaving the character as complete as he needed to be. The College questline doesn’t yield that much in terms of roleplay or gameplay, so I left it. It didn’t seem fitting for an ex-soldier and wanderer to become an Archmage for me, but who knows, maybe your version finds meaning in mastery of Alteration and wants to run his own magical institution?

Acquiring Solitude Guard Armour is something of a roleplay-roadblock. You can either wait for a dragon or vampires to attack and for a guard to die, or… Suffer a grave misunderstanding at your hands… I’ll admit, this aspect of the build sucked for me. As a character intended to be created through entirely vanilla means, you may have to momentarily compromise your roleplay experience for the sake of the build. If you have mods or play on PC, you could of course utilise, alternate methods to get it. As I said in the equipment section, the gear for this build isn’t rigid - you can afford to be flexible, so you could replace it with something similar like the Dawnguard Light Armour red variant.

I really wanted to hold on to the concept of a character who couldn’t settle down and was always in search of something more. As such, I didn’t marry or buy a house. You can store anything you want to keep in the various safe storage containers throughout Skyrim. 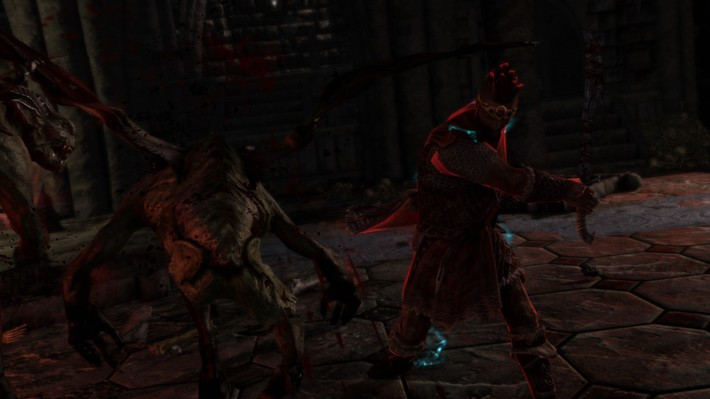 Thank you for reading if you’ve got this far. This build is fairly simple and isn’t exactly revolutionising Skyrim melee combat, but I enjoyed it for what it is. The gameplay loop was fun and the aesthetic worked well, with just enough roleplay freedom to pursue a good amount of quests and a reasonably lengthy playthrough before completion. Everything sort of comes together quite naturally - there’s not much in the way of grinding or minmaxing that pulls you out of the adventure.

I have something of a soft spot for taking simple gameplay concepts and turning them into a build with a signature aesthetic and roleplay flair, because I think they’re easy to get into and provide enough content for a satisfying experience. Perhaps it’s unambitious, but I made this build fairly recently having not played Skyrim much, if at all, for the past 2 years since I debuted on the site with my Morag Tong Assassin, and it was more than enough to reinvigorate my interest in the game.

Sometimes going ‘Back to Basics’ is all you need for a fun build. I know all too well the struggles of getting caught up in trying too hard to find some hidden or overlooked mechanic or lore facet in the search of being the most original or impressive. If this build has taken your interest, give it a try and tell me how you like it, or what you did differently.

I know the aesthetic and some parts of the build resemble Teccam’s Sword Singer. This wasn’t purposeful, but I hope the similarities don’t detract from the two build’s being different. I just felt I should acknowledge this.

As a final note, while I do play with some mods installed, every aspect of this build can be created in vanilla Skyrim and was play tested to ensure this. That being said, I’m sure it’ll work perfectly well with perk overhauls like Ordinator and other mods if you’re so inclined, based on what I understand about them.

of 2 Next
This reply was deleted.