This is a build that can be done at a very low level even level one; as your character isn't the one that will be doing the majority of the damage. The damage is going to be done by your army of followers. I really like idea of a low-level character that is using teamwork and gear to win the battles. This is mainly a how-to guide on how to build an army not using the ritual stone Aetherial Crown loophole.

This is also a non-crafting build as you don't really need any specialized equipment. This is all done in vanilla special edition skyrim.

"Blessings of the moons upon you, traveler."

You are a Dagi-raht Mystic from Elsweyr. As a true Khajiit you disdain weapons in favor of your claws. Armor is just going to slow you down. The teachings of the Dagi-raht teaches you that true strength comes from the pride. A rogue cat will starve and die alone in the wilderness. A strong pride will strive and flourish.

Dagi-raht Mystics are powerful staff users. They know that it wise to reserve one’s resources.

Rid-Thar-ri'Datta the first Mane came to you a vision. He told you to travel to Skyrim and form the most powerful pride formed of all the races. Rid-Thar-ri’Datta promised that you would become a master of the Roar; an ancient form of Khajiit Magic.

"M'aiq loves the people of Skyrim. Many interesting things they say to each other."

Race: Khajiit (You could also play as a Bosmer *Thalmor Secret Agent* command animal is a nice ability for this build)

Stone: The Tower Stone to help you unlock chest and doors without leveling your lockpicking.

"Too much magic can be dangerous. M'aiq once had two spells and burned his sweetroll." - M’aig the Liar 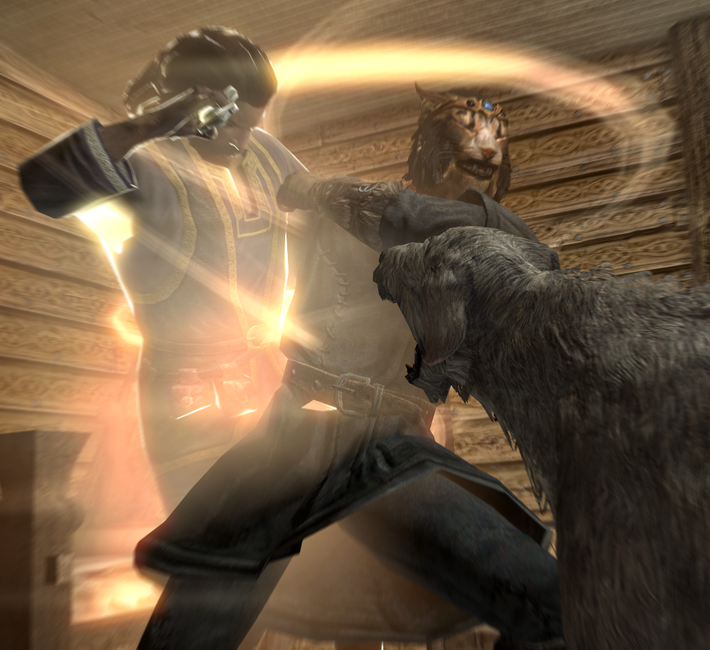 Major Skills: (You fight with your claws) and use staves, scrolls, and potions

"If you provoke me, I will be forced to unsheathe my claws."

“A Khajiit carries two weapons their claws. Nords carry metal blades. What if one breaks? That would be most unlucky."

"Don't try blocking if you have two weapons. You will only get confused. Much better to hit twice anyway."

Major Quests: A lovely Letter, Dark Brotherhood Questline, Thieves Guild up to Speaking to Silence, Taste of Flesh, Laid to Rest, the Blessing of Nature, Lost to the Ages Waking Nightmare, First Lesson, The Book of Love. Dawnguard up to Bloodline, A Daedra’s Best Friend (level 10), A Night to Remember (level 14), Frostflow Abyss (level 20) 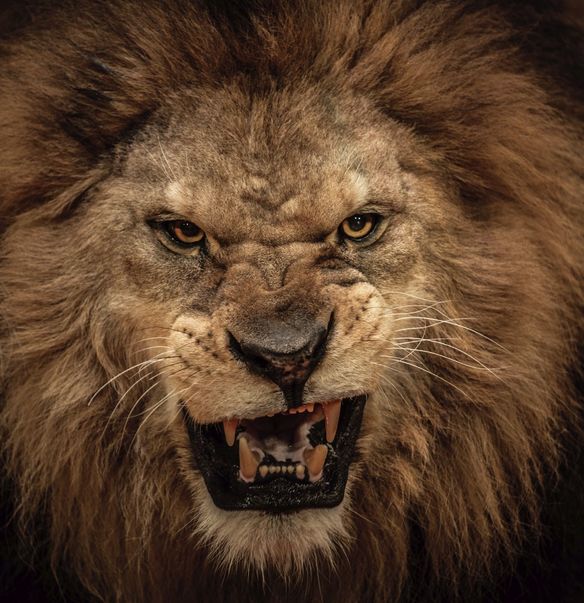 Master of the Roar

"Louder than the roar of the Mane that is!"

Sanguine Rose (If you are high enough level) 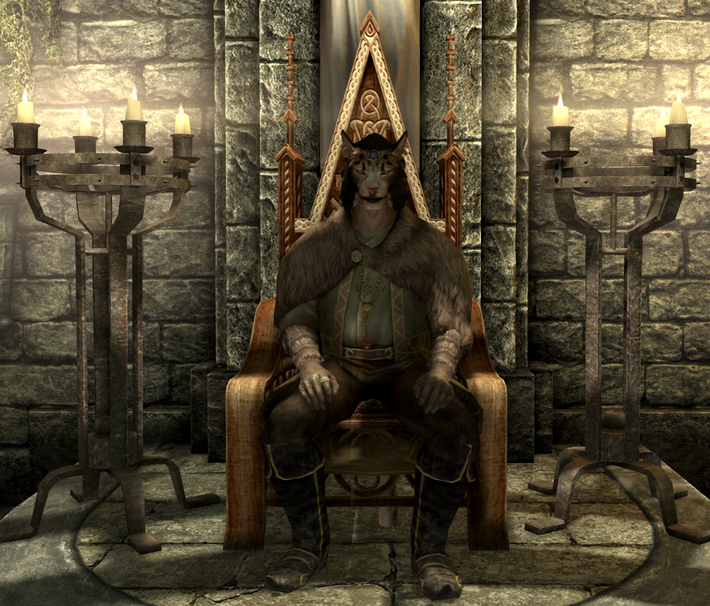 Help Faendal so he will be your follower.

You will need to get your paws on a broom, grand soul gem and Corundum Ingot. There will be fire salts at the Atronach Forge. To make your life easier double that! The easiest way to get your paws the components that you need is to go to Dawnstar and search the hidden chest by the mine entrance. “Khajiit look out for each other!”

Get to the Tower Stone so you can open locked doors or chest up to expert level.

Get over to the College of Winterhold and down into the Midden so you can make a Staff of Flame Atronach. While in the College go to The Arcanaeum and read The Aetherium Wars. This will trigger Investigate the ruins of Arkngthamz.

Travel to Markarth and buy Vigilance. If you don’t have 500 gold you can walk to Dragon Bridge head east and get Meeko for free.

We need a horse. Go to Katla's Farm just outside of Solitude. Sell Katla a potato and she will let you borrow a horse for free.

Do the main questline up to Dragon Rising so you can get Lydia and have Dragons flying in the skies.

Okay run around and kill a bunch of people and line your pockets with gold as you can complete the Dark Brotherhood quest. So, you grow your pride with the additions of Cicero and both Dark Brotherhood Initiates. Here is video of me getting the DBI and Cicero glitch to work. It probably took me seven tries to get it to work.

Summon Spectral Assassin You get Lucien Lachance from doing the Dark Brotherhood questline. Lucien will hang around until he gets killed. Then all you have to do is wait 24 hours and you can summon him again. (counts as a summon slot so if you are using thralls don’t summon him)

Shadowmere: Be sure to ride Shadowmere everywhere that you go so he will fight for you in battles. You get Shadowmere from doing the Dark Brotherhood questline.

Stone: If you give the DBI lockpicks you can switch out The Tower stone for the Ritual stone

Quests: Dawnguard up to Bloodline, Taste of Flesh,

Take a boat to Raven Rock and pay Teldryn Sero to join your pride.

Get over to Snapleg Cave kill some witches and claim the Staff of Paralysis for yourself.

Head back over to Markarth to complete the first half of Taste of Flesh so that Brother Verulus will join your pride.

Go to Riften and then travel east until you cross the bridge and get attacked by a pack of wolves. There you will find the secret entrance to the Dawnguard sanctuary. Take the quest to delve into another dark tomb. There you find Serana, she is a great addition to your pride.

Back to Riften, If, you have not already done it join the Thieves guild. Complete the first couple of quest and Mercer Frey will join your pride.

Quests: The Heart of Dibella, Laid to Rest, The Blessing of Nature, Lost to the Ages

It is time to Investigate the ruins of Arkngthamz. A ghost named Katria will join your pride. Once you get to that big confusing lock give up and walk out of the cave. (Special note: Katria can be healed by healing hands.)

Back to Markarth, break into the temple of Dibella and piss off a lot of women. They will tell to go find some brat. When you get Karthwasten, you can talk to Enmon and he will join your pride in the hopes that you will get around to find his little girl.

Go to Mothal run around the village talk to a ghost and kill a vampire. You will get asked to delve into a cave and go kill more vampires. Outside the cave, the Vampire Hunter Thonnir joins your pride. Walk away.

Back to Whiterun. Do the first half of the blessing of Nature, Maurice Jondrelle will beg to join your pride. Jokes on him you aren’t going to that tree.

First lesson so that you can gain access to the Atronach Forge. (Winterhold)

A Night to Remember: Sanguine Rose use to summon a Dremora. Extra melee team member(s). You can summon two, once your conjuration is to 100. (Level 14)

Black Book: The Winds of Change It is also recommended to acquire the companion's insight perk to stop the Dragonborn from accidentally hurting or killing the followers.

Notes on even more team members

Black Book: Epistolary Acumen - Dragonborn Flame will create a Fire Wyrm from the corpse of a foe killed by the Fire Breath shout.

Conjuration leveled to 100, you will be able to summon 2 beings or 2 dead thralls (Necromancers and conjurers can also summon more teammates) If you use the ritual stone your thralls will fall/die.

The Conjure Ash Guardian spell is not affected by the Twin Souls perk, meaning you can only have one Ash Guardian out at once. But it is also bound to a rune, so you can have two summons plus an Ash Guardian

If you are near a city you can sprint back to the entrance and allow the guards to help you fight.

Summon Karstaag to fight for you for 120 seconds. You may only use this ability 3 times, and only while outdoors.

Like most Khajiit, the general tendency of humans and mer will be to look down on you as a "beast," you will not be welcomed in most of the settlements in Skyrim. So, you will not be interacting with any of the merchants inside of the cities. (You don’t want to level your speech by selling things)

Try to avoid quick traveling to walled cities as some of your followers will end up at the stables first and then have to run into the city and catch up to you. If you have maxed out conjuration, dead thralls can glitch and disappear if you fast travel to a walled city.

"May your road lead you to warm sands."

Your pride is at it's most powerful when you are out in the open so riding your horse everywhere plays to your favor. Shadowmere has a lot of hit points and charges into battle as soon as you dismount him.

The Roar of Lion: Amulet of Talos + 2 Potions of the healer(Philter or Elixir are the best if you can get them)

1) Get Potions of Fortify Restoration (Potion of the healer 20%, Draught of the Healer 30%, Philter of the Healer 40% or Elixir of the Healer 50%)
2) Drink two potions, but don't leave the menus
3) Unequip, then re-equip your Amulet of Talos without leaving the menus

You are now good until you unequip the amulet.