Communication with the Hist has sent our mage all over the continent. They directed him to Skyrim where he is to find and help restore one of their own, the Eldergleam. Once he made his way to Skyrim he discovered it needed more help than he could imagine. 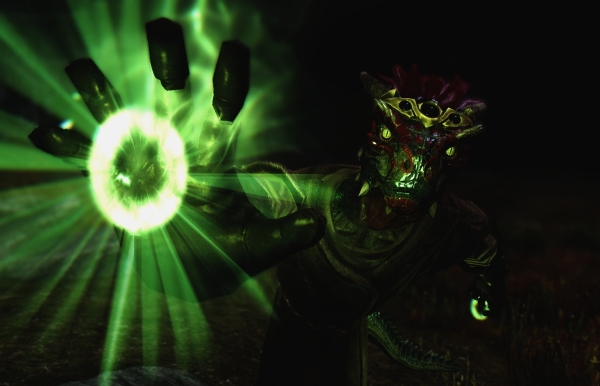 The Hist Mage can handle any combat situation well. He has limited but effective melee skills that can stand up to most enemies even though he wears clothing. His magic is the star of the show and will weaken then destroy all who oppose him. Poison, elemental magic and a giant two handed sword - this guy is a real badass!

When playing this character you MUST stick to the role play. Make sure you check your environment for sources to draw from. Do not use a spell without a source being present.

Items and their Enchantments

Control of Fire: Whenever fire is nearby you can turn it into powerful fire spells. You are able to use anything from Flames to Summons to Fire Storm to Fire Breath. Meditate on Yol (main quest) to make Fire Breath a dominant shout. You will be surprised how there is fire almost everywhere in every dungeon!

Control of Water: The presence of water, in any form, allows you to use your ice spells with deadly effect. Frost Atronachs are great warriors that take the attention from you and deplete the enemy's stamina. Use Waters of Life to heal yourself and your allies or cast Ice spells to end the battle. Find the power Dragonborn Frost to turn upgrade your Frost Breath to match your Fire Breath. The ultimate show of control will result in summoning a gigantic monster, Karstaag, to fight your battle for you!

Control of Ground: Above ground or below, you can make use it to defend yourself or to attack the enemy. These spells are available at any time since there is always dirt and rocks nearby. Flesh spells (Stoneflesh, Ebonyflesh) are available whenever you need some defense. Ash spells can turn the tides of combat. Ash summons (Guardian or Spawn)  will defend you with their lives. Ash Shell or Ash Rune can give you breathing room in combat.

Control of Air: The air you breathe is also capable of becoming an ally. You can manipulate it to move you quickly across the battlefield (Whirlwind Sprint) or send nearby enemies flying (Whirlwind Cloak, Cyclone and Unrelenting Force). North Wind will deal a great amount of damage to any who threaten you. One word of Cyclone will topple foes and let you come in close to finish them off. Control the sky (Clear Skies and Storm Call) unlike any other in the land.

Control of Poison: Whenever poison is near, through the poisoned weapons of an enemy or just with harvestable ingredients, you can use them for combat purposes. While you do not have alchemical poisons you do have spells. Poison Rune will stack with itself and drain the enemy's life force quickly when you pile 4 or 5 of them on him. Mora's Agony is a poison power that staggers and harms your foes.

Control of Blood: Blood is all around, wherever you go your blood goes with you. Use Equilibrium to replenish your magicka. Heal yourself and your allies with Restoration spells. Control the enemy's blood to send him fleeing (Dismaying Shout) and send him on a "wild goose chase" (Throw Voice). You can sense the blood of anything around (Detect Life) and even the dead (Detect Dead). The Hist Mage can harden his own body, making him invulnerable for a short time (Become Ethereal) and can control the blood of lesser beings (Animal Allegiance) and even control greater beings (Dragonrend and Call Dragon). 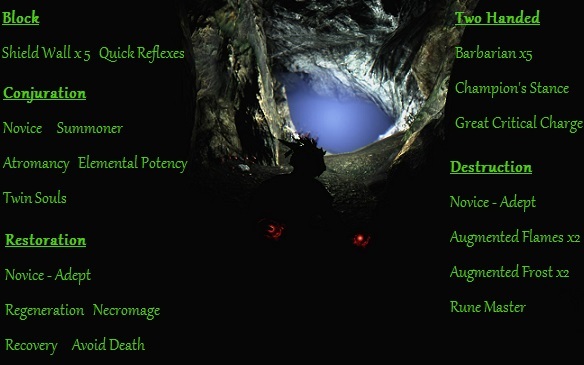 You are entirely dependent upon your surroundings. When an element is present you can use any spells, shouts or powers that "control" this element. You can use your Control of Ground, Control of Air and Control of Blood at anytime because these things are always nearby. You can control Fire and Water only when those elements are present...

The Master Hist Mage can use Secret of Arcana to cast two summons, a Flame Thrall and Frost Thrall. This moves your Control of Fire and Control of Water from situational abilities to full time abilities. Your thralls will be your source of magic and you can now control those magics whenever you need them.

Secret of Arcana + Flame Thrall + Frost Thrall: As mentioned above, use thralls to create a permanent source of elemental magic. This takes your Hist Mage to a whole new level, making him able to use fire and frost magic at any time.

Mora's Agony + Poison Rune + 2 Handed: Stagger and damage an enemy with Mora's Agony then pound him with Poison Runes. Finish him off with your melee skills.