Hey guys, this is my first ever Build I made for Skyrim back in 2016 (give or take a year or two). Exactly how I first posted it. I left it in it's (in my opinion cringey as hell) and original way without improving it as I plan to create a discussion about it in the next few days. Do's and Don'ts in a sense.

Hello, this is my first build. The Nightingale Sentinel has nothing to do with Mason's Sentinel builds. I'd like to thank Fevnall for helping me with this build as well as Curse Never Dying for helping edit my backstory. This build does use a lot of skills but with little perks in them, it increases the damage and survivability rate.

Evergloam, is a realm of Oblivion, created and ruled over by the Daedric Princess of Shadow, Nocturnal. Evergloam is a realm of endless twilight and the so called "cradle of shadow". Evergloam has several 'poclet realms' or connecting realms, including the Shade Perilous and the Crow's Wood. The most known (and possibly only) way to Evergloam is the portal Ebonmere, which acts as Nocturnal's conduit on Tamriel. To this very day there are a few who call themselevs priests of Nocturnal, though she doesn't seem to have any real interest in worship. Legend speaks of a mysterious priest who worshiped Nocturnal. So little is known of this priest, that many had led themselves to believe he was merely a myth; a ghost vanishing at will to elude his pursuers. This ghost of a man would later be revered as a Sentinel, powerful and mysterious beings who are one with the shadows.

The priest's one desire in this world was to enter the realm of Evergloam, but Nocturnal refused him. Dejected but undaunted, the priest searched tirelessly for a means to enter the realm, but none would be found. In his desperation he sold his very soul to Molag Bal in the hopes that through un-death he could finally enter the Evergloam. Some believe this dark bargain was the end of him, but others believe he is still alive. 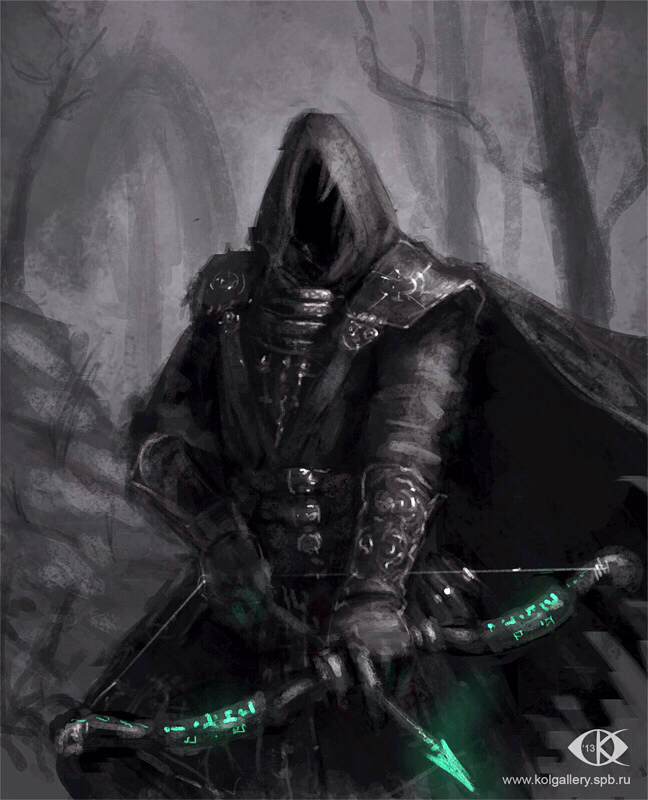 The Nightingale Sentinel is almost your everyday stealth archer but with a mysterious origin. The Sentinel uses its Nordic Carved Bow enchanted with Frost and Shock Damage with Bound Spectral Arrows (basically Daedric Arrows for free), to destroy everything and anything standing in its way of reaching Evergloam. It has to abilitiy to either, freeze it's enemy solid or send it's enemies running in fear, and it can send anything that is in it's path flying away with just an arrow. (See special moves section for more details).

The Sentinel uses Enchanting to enable it to reach higher levels in Restoration and Destruction which can increase its damage and enchantment strength. Using the perk Necromage, Vampirism, required perks in the Enchanting skill tree and Seekers of Sorcery, your Fortify Destruction with Magicka Regen enchantments goes to 43% cost reduction and 10% Magicka Regen. By getting Novice Destruction, Augmented Frost 2/2, Augmented Shock 2/2 with Seekers of Sorcery your Nordic Carved Bow can reach up to 63 damage per element which equals up to 126 damage JUST IN ENCHANTMENTS. When walking into towns or villages, always wear your Hooded Monk Robes, and do not reveal your name to anyone (if possible). You may help people if you wish. Only enter towns/villages at night or roughly around dusk. Start the quest 'Lost to the Ages' and finish it as soon as possible as entering Dwemer Ruins are near impossible to survive with this character at higher levels. Also attempt to gain as much money as possible and train your Destruction and Restoration skill.

You can obtain the Muffle spell tome from Farengar as soon as you enter Dragonsreach. Using the Muffle spell will help level your Illusion skill and make you near silent to certain enemies. Armour-wise, try to use some form of 'dark' looking Light Armour such as the Vampire Light Armour (Black Variant). Also obtaining a follower will help if you get swarmed by enemies (which will happen).

Join the Dark Brotherhood ASAP, as it will help level most of your skills. Also joining the Thieves Guild will help level your Sneak and Illusion. You will have constantly buy arrows from any merchant. The cheapest and most 'strongest' arrow is the Iron Arrow, which you can craft if you have the Hearthfire DLC. Do not enter Solsthiem or start the Dragonborn Questline. When you hit level 10, join the Dawnguard and 'switch' to the Volkihar Clan. Doing so will give you, Vampirism and the ability to become a Vampire Lord, which can be used as a backup plan. Attempt to get to the quest 'Trinity Restored' in the Thieves Guild questline before hiting level 25. You should have the Aetherial Crown and be up to the quest 'Trinity Restored'.

Now time to fully release the builds potential. You should aim to obtain the following after level 25+; Morag Tong Armour, Nordic Carved Bow, Bone Hawk Amulet, Bone Hawk Ring and Ahzidals' full 'set' of armour. One thing I have found out is that Necromage is a giant game changer.
Get the Apprentice Stone and equip the Atronach Stone in the Aetherial Crown. Applying the Atronach Stone in the Aetherial Stone with Necromage makes the Stone 25% more powerful. Just a warning though, using the Apprentice Stone you will be extremely fragile when fighting certain enemies such as Dragons but the Atronach Stone can (at random times I believe) make you near invincible during certain times in battle. Making an enemies strongest spell do nothing to you.
Start most battles (some you can not due to Dragons) in the shadows, fire off a Fury spell but be careful. I found out the hard way that Rout (stronger version of Fury) has a 'splash' damage, hitting most enemies and potentially NPCs or your follower. Finish the Dark Brotherhood and Thieves Guild main questline as it will help bring in alot of gold that can be easily transferred to training for Restoration and Destruction.

The image may be blurry. I do apologise if they are as I took the image on my phone and I was shaking at the time. The screenshot shows what armour you can use as End Game Gear.

Now these 'special moves' are from the Advanced Archery Corner and Fevnall. When I say 'store' in the first three tricks, I mean while having an arrow fully 'drawn', shout but do not lower your bow.

Trembling Fear: Requires Disarm/Dismay with any arrow.
Best used when heavy surrounded in a narrow hallway. 'Draw' an arrow and while aiming 'store' either Disarm or Dismay (tap for one word of hold for all three words) then release your arrow and watch as your enemies either run in terror or they drop their weapon in fear. May work on Draugr Deathlords.

Double Shot: Requires two arrows and Slow Time or Steady Hand
The Double Shot power is achieved by releasing an arrow and then pressing Attack-Sheathe-Attack in rapid succession. The first arrow will go to where ever you are pointing but the second arrow's positioning is relative to your hand positions hen the combo is achieved and has a bane's axis to determine it. To counter this with a small slow time or the perk Steady Hand can keep those hands where you want them to hit.

Archer Sneak Roll: Requires the ability to sprint, 'draw' and sheathe.
This does not require the perk Silent Roll. To achieve an Archer Sneak Roll, you need to hold the sprint button and then while sprinting, draw an arrow and then sheathe it. Doing this will break animation allowing you to roll and can be repeated in quick succession. With practice this method is faster then the traditional Silent Roll perk. This special move works well with Muffle and Invisibility.

Instant Arrows: Requires Bound Bow, Secret of Arcana and any bow of your choice
Now a word from our sponsors *catchy tune* 'Hello, good sir, are you a discerning archer who says f*ck it they will be porcupines? Do you often find yourself running out of arrows? Well, not anymore my fine fellow, for we have a cure. By learning the rudimentary Conjuration and beating Herma-Mora's a** for some so called 'forbidden knowledge' you can start conjuring arrows today' *catchy tune/ad ends* Yes indeed, you can conjure arrows by single casting the bound bow in BOTH HANDS, and releasing them at the same time which will grant you 200 bound Daedric arrows at ANY level. Now this is very temperamental and that's why we recommend getting the Secret of Arcana power to do this glitch/power.

Archery: This is the only way that the Sentinel can attack and it enables the Sentinel to launch devasting attacks while either remaining in the shadows or standing in front of its enemies. This skill will level very fast as it is your only form of attacking.

Illusion: This skill is used to twist and potentially destroy the Sentinels enemies mind's since you are a ghost. It also helps with getting away from certain enemies when needed.

Sneak: This skill enables the Sentinel to hide in the shadows with ease and attack without being noticed. This helps the Roleplay since most ghosts are near impossible to see.

Enchanting: This skill will increase your survival rate and help dish out more damage when needed. It also helps when you need money for training

Light Armour: This skill helps the Sentinel stay light on its feet, while not being weighted down and not making a lot of noise when sneaking. This skill will level quite quickly later on.

Restoration: This skill is purely used for making the Sentinels' armour and weapons stronger than before.

Destruction: This skill is purely used to increase damage of the Nordic Carved Bow.

Innocence Lost/With Friends Like These: Join the Dark Brotherhood ASAP as it will help you level your Illusion, Archery and Sneak and it will provide you with a Shrouded Cowl and an Ancient Shrouded Cowl later on.

Dragonborn Main Quest Line: Doing this questline will provide you with Dragonborn Frost which is used for Freezing Shot.

Unearthed: This will lead to the Black Book: Filament and Filigree, which you should read, as it will lead you to the Secret of Arcana power.

Dawnguard Main Quest line: Join the Volkihar Clan during the quest Bloodline, and stick with them for the rest of the quest line.

Main Quest line: Do this questline up to Dragon Rising, then it is your choice if you wish to continue with the quest line.

Served Cold: Doing this side quest will help you get your Morag Tong armour which, during the quest is on the shelf in the sleeping quarters, but you must have done the quests March of the Dead and The Final Descent.

Thieves Guild Main Questline: Doing this quest will, level Sneak and Illusion. While giving you some trainers if you need it. Also it helps the roleplay as your are a priest to Nocturnal

Lost to the Ages: Do this quest ASAP, you can find the book 'Aetherium Wars' in Dragonsreach in the room directly across Farengar's sleeping quarters in the book case.