Hollowjack is the daedra Lord of Mortal Fears and ruler of the demi-plane Detritus. When men and mer pray to their gods for help or mercy, he drains power from their fear, with whispers through his long, sharp teeth. With his words, he strikes fear into the hearts of mortals. With his armor, forged in Oblivion itself, he shrugs off the blows of Nirn's weapons. He destroys all who oppose him with axe and fire. On the 13th of Frostfall he comes to haunt the living. Hollowjack has now made a pact with Hircine. Hircine will lend Hollowjack the power to stay on Nirn forever, as long as he takes the beast blood, embraces the true spirit of the hunt, and sends Hircine the fear energy that he harvests. Race: Nord Werewolf, Battecry will let you fear enemies without using Magicka, and the bonus to Two-handed is helpful. Werewolf form is for your pact with Hircine and will help to chase down feared enemies.

Stats: 2 Magicka/ 2 Health/ 1 Stamina. Stamina is less important, your main goal is to keep enemies scared and then hunt them down.

Standing Stone: Lover then Ritual, Lover is good for early game, while Ritual is good for when you've gotten your skills to a good level.

Shouts: Animal Alliegence let's you summon various animals to come fight for you, making your "pack." Aura Whisper is good for detecting enemies. Become Ethereal lets you close in on mages and archers. Dismay helps when you're out of Magicka and need a fear effect. Marked for Death and the glitched version of Drain Vitality (learned alongside Marked for Death) both allow you to hurt enemies as they run from you.

Patron: Hircine, Hollowjack shares a connection with him. It is mentioned in books that Sheogorath once challenged Hircine. Hircine went to a hidden realm and created a daedroth and imbued it with beast blood to fight Sheogorath. This daedroth is described as a horrible beast with long teeth and that it was a fearsome sight. This description matches that of Hollowjack. Also, Detritus is a half-plane which could be the "hidden realm" mentioned in the book. Wolves and other strange beasts can be summoned from Detritus. This implies that Detritus is a plane connected to the Hunting Grounds, and also the plane in which Hircine makes new beasts, and that he created Hollowjack to rule over it. Due to this, it is reasonable to say that Hollowjack is Hircine's creation and a powerful half werebeast in his own right. 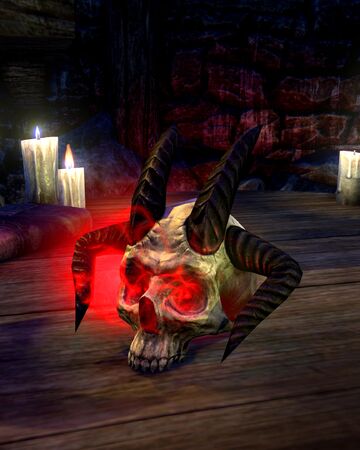 You should be level 50 when you're done.

Note: There are some suggestions for grinding skills below, you by no means have to use them if power leveling isn't your style.

Illusion: This is your main way to fear opponents and helps you sneak better. If you take Aspect of Terror after you take Augmented Flames in Destruction, you'll get a 10-15 damage boost from fire spells. With Master of The Mind perk, you can use buffing spells on your raised dead. Keep in mind that different buffing spells stack. Casting muffle is an easy way to level Illusion.

Destruction: This is your long range damage dealer. Aspect of Terror gives a damage boost to fire attacks because fear is counted as a fire effect, just make sure you take it after Augmented Flames. Intense Flames lets you fear enemies with your fire spells. Make sure to pick up Azhidal's Ring of Arcana from the quest Unearthed. The ring gives you the ignite spell, which is actually an extremely powerful spell, because the DoT(damage over time) effect stacks. Ignite can get 21 damage per second with Augmented Flames and Aspect of Terror, and you only need Apprentice Destruction to cast ignite.  Destruction can be trained by attacking Shadowmere.

Heavy Armor: Your goal is to keep enemies scared, but this is useful for when you run out of Magicka. No special gimmicks here, just high defense. You can turn your difficulty down and let yourself get hit by enemies to train this.

Two-handed: Battle-axes are the name of the game here. Limbsplitter gives you more DoT while your enemies are running away. However, the main reason this is taken is for Great Critical Charge. In case you didn't know, a silent roll counts as sprinting, so you can activate Great Critical Charge and get a sneak attack that does double, double critical damage. This is your main way to start combat. Like Destruction, Two-handed can be trained on Shadowmere.

Sneak: Like I just mentioned, silent roll/great critical charge is going to be what you use to take strong enemies out. Muffled Movement stacks with the muffle spell, giving you completely silent movement. Silence perk will give you completely silent movement without muffle, so then you can focus on invisibility. You can train this by the Hadvar/Ralof exploit, or by sneak attacking the Greybeards while they're praying.

Conjuration: This is perked for making your Ritual Stone summoned undead stronger, and allowing you to very easily summon familiars. This is also for getting Daedric armor via the Atronach Forge. It's easy to train by casting soul trap on a corpse.

Heavy dragon priest mask: This looks like Hollowjack's face and hood. I recommend Otar, because the elemental resistance boost can help in a pinch.

Daedric armor, boots, and gauntlets: Like I said earlier, you can get this from the Atronach Forge. Complete the Conjuration Ritual quest, put the sigil stone in the forge(down in the Midden), put a filled greater or grand soul gem(filled with greater or grand soul), a daedra heart, an ebony ingot, and one void salt into the offering box, and pull the lever. This will give you a random piece of Daedric armor, with a random enchantment. Make sure to save beforehand, so that you can reload and get the piece and enchantment you want. Until you max out Conjuration, just use the strongest heavy armor you can find.

Ring: Ahzidal's Ring of Arcana gives you the powerful ignite spell. The Ring of Hircine can be put on when you want to become a werewolf.

Necklace: Whatever you find that has a useful enchantment.

Aetherial Crown (Optional): By unequipping and reequipping the Aetherial Crown, you can use standing stone powers equipped to the crown more than once per day. Using this with the Ritual Stone can be overpowered, which is why this is optional, but it will let you summon an undead army.

Weapon: A Battle-axe. I chose the Headsman's Axe, but any Battle-axe will do.

A silent roll counts as sprinting, so you can activate Great Critical Charge and get a sneak attack that does double, double critical damage.

By activating become ethereal, you can sprint and do a running power attack without spending any stamina. Use this to take out long range opponents.

Once there are enough dead bodies from your fire and Battle-axe, use the Ritual Stone and Illusion spells to buff them. The different spells stack, so soon you'll have an army that is stronger than when you killed them.

Shadowcloak of Nocturnal makes Hollowjack invisible when sneaking. By using Reaping and then going out and back into sneak, you can become invisible again and repeatedly use Reaping.

First use Marked for Death to debilitate your opponents, then Battlecry to scare them, Ritual Stone finishes this combo off. Your undead will hunt down your enemies while they're helpless and growing weaker. The best part about this is that it doesn't cost any Magicka to use. 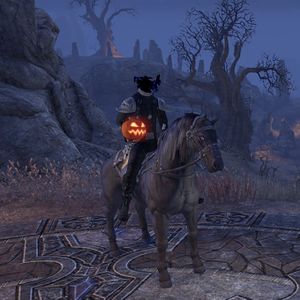 Number one is playing it stealthy. Use muffle and invisibility spells, and then go in for the kill with Reaping. Early game, it can be hard to sneak at all, but muffle spells and Muffled Movement perk will make you silent when used together. Later, invisibility will let you kill and then become invisible again, so you can get a few extra kills in. Deadly Dance of Definite Doom will let you kill even more enemies without spending Magicka. Don't forget that Aura Whisper is an invaluable tool for scouting out enemies.

Once you've produced enough corpses, you can drop stealth. Starting off with Raise Your Spirits will probably be your best bet. Use Ghostly Sprint on mages and archers. Don't be afraid to empty out your Magicka with fear and ignite spells on anything that gets close to you. In most cases, Deadly Dance of Definite Doom and Neverending Torment right after that will kill all of your enemies.

Werewolf form is your third option. You can try emptying out your Magicka with spells, using the Ritual Stone, and then turning into a werewolf. In beast form you'll be fast, so you can quickly chase down feared enemies. Make sure to take the quest to get the totem of brotherhood. It will let you summon wolves from Detritus.

Your goal is to spread fear and chaos. Never miss out on the opportunity to make a morally wrong decision, or to make someone's life miserable. Terrorize patrols and wreak havoc on Skyrim. Looking for an excuse to kill Nazeem? Now you have one. Or, better yet, you could kill his wife.

Companion's Questline: This build is about Hollowjack, but it's also about his connection to Hircine. Therefore, this questline is perfect. Wuuthrad is a viable option for this build's weapon. You can also get free warrior skill training at the end by getting training and then trading the money back through the follower menu.

Ill(ill) Met By Moonlight: Another Hircine related quest. I suggest getting the ring.

Pieces of the Past: Mehrunes Dagon has a strong connection to Hircine, and actually made the Spears of Bitter Mercy. You can take the daedra hearts from the dremora at the end to use for making your Daedric armor.

Dark Brotherhood Questline: Hollowjack feeds on people's fear, so make the people of Skyrim fear the Dark Brotherhood. Shadowmere can be used to train your Two-handed and Destruction skills.

Thieves Guild Questline: The same thing as the Dark Brotherhood. At the end you can get Shadowcloak of Nocturnal, which is essential for Deadly Dance of Definite Doom.

College of Winterhold: You don't need to do the whole questline, just join so you can buy Destruction and Illusion spells.

Unearthed: Do this to get Ahzidal's Ring of Arcana.

Lost to The Ages: This gets you the Aetherial Crown, if you want it. Like I said earlier, it can get OP.

A Scroll for Anska: This is just for the Flaming Familiar spell.

Keep in mind that you aren't limited to these quests, so feel free to try others, and just have fun with this build.

This is my first build. I'm sorry if it doesn't quite meet your expectations, but I had a blast playing it, and I hope you do too. If there's any improvements or constructive criticism that you have for me, I'd like to know, leave a comment for me. Thanks!