This WIP build is inspired by the Dungeons & Dragons 5th Edition Fighter subclass of the same name, stored here as proof of concept and a way for me to double-check formatting. This build was playtested with and designed around a number of mods. The following mods are thus required for you to get the same experience:

The following mods are not necessarily required for the build to function as intended but are nonetheless recommended to enhance your overall experience: 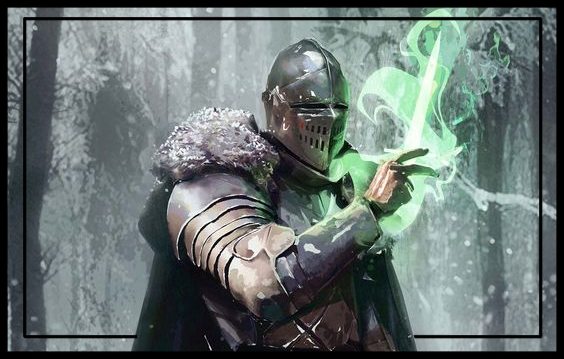 A man fully armed and armored in plate does battle in a ruined castle courtyard. Fending off waves of bloodthirsty vampires, he picked a bad time to get lost. Or did he? A cloak of fire keeps the undead predators at bay, and potentially deadly blows from those daring to brave the flames are intercepted by his armor or his shield. A slash of his flaming Daedric sword sets one of them ablaze and beheads another. Surrounded by monsters from all sides, the man slips into a fading ethereal state and repositions to a safe distance, leaving behind a trapped rune that detonates in the vampires’ faces. The man fully armed and armored in plate leaves behind a trail of ashes and dessiccated corpses and will live to pick another bad time to get lost. Such is the way of the Eldritch Knight.

The Eldritch Knight is an elite breed of fighter, a peerless warrior taking up a degree of arcane aptitude to cover any weaknesses other lesser fighters might face. The magic of an eldritch knight refers to an ancient magical craft. Not relying on a reserve of magicka, they instead ingrain a certain number of spells to memory, fading after each use. Eldritch knights excel in the frontline, often mastering the sword-and-shield style of warfare, which has been tried and true for generations. Though heavily armored as is, these warriors enforce their bodies with Alteration magic, abjuring threats both physical and mystic in nature. In addition to blade and brawn, the eldritch knight is armed with the power of destruction magic, though which element of destruction they choose to wreak on their enemies varies from knight to knight.

In true Dungeons and Dragons fashion, nothing is stopping you from making an Eldritch Knight of any race. That said, there are a couple of races with bonuses that synergize well with what this build aims to do.

Breton are premier spellcasters as far as humans go. The bonuses to Alteration and Restoration, as well as a passive 25% magic resistance serve this build well. The Dragonskin racial power is an excellent hail-mary against magical foes, and a hefty bonus to Conjuration opens a path for a Bound Weapon and Summoner variant of Eldritch Knight.

Dunmer are another solid choice, especially if your Eldritch Knight feels a tad pyromaniac. The bonuses to Destruction and Alteration provide a headstart for leveling key perks, and Ancestor’s Wrath can help cement victory or even the scales in lower level skirmishes.

Redguard was the race I eventually chose in playtesting this build. An Eldritch Knight may well be a gifted magician, but they are warriors first and foremost. With that in mind, the Redguard bonuses are second to none for physical builds. The Alteration destruction boosts are but icing on the cake. Adrenaline Rush is a racial power that can let you pull off some absolutely brain-dead feats. Use it well.

Attribute Spread. 2:1:2. I chose this particular spread early-game focusing on Magicka due to my wanting to be able to cast Oakflesh reliably alongside other utility spells like Healing, Firebolt or Wild Healing. Once your Magicka reaches 200 (a point at which you should also have both Vancian Magic and Quadratic Wizard, explained below), feel free to use an even 1:1 spread of Health and Stamina.

Active Effects. Force Without Effort, Sailor’s Repose, Agent of Mara, Blessing of your choice, Alter Self

Shouts. In the end, you will find a use for almost every Shout in-game. The Thu’um is but another form of magic in the Eldritch Knight’s spellbook. Shouts with exceptional performance during my playthrough are Become Ethereal, Slow Time, Unrelenting Force, and Ice Form. 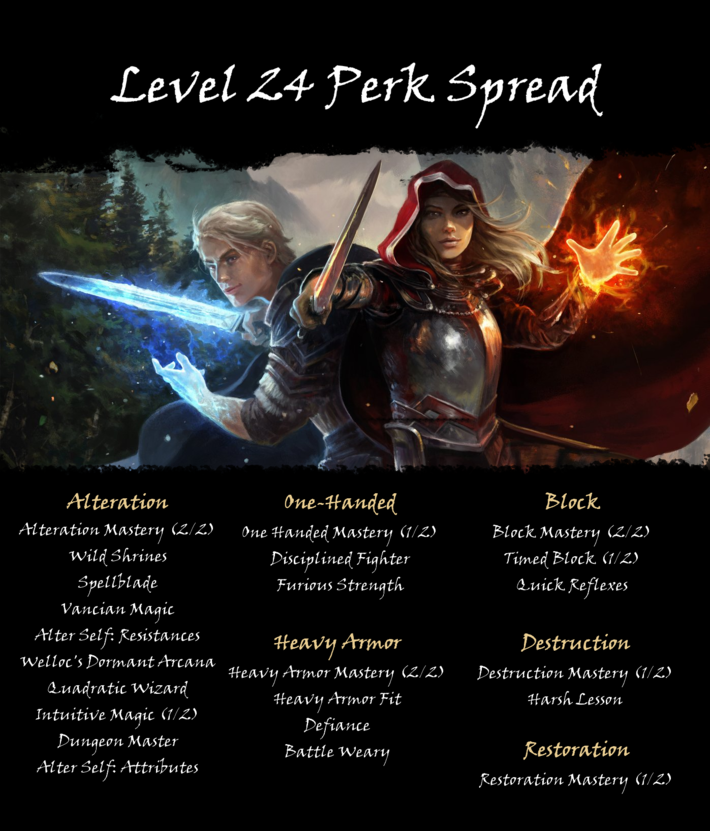 Alteration. The art of abjuring your body with magic is the speciality of an Eldritch Knight. This skill is absolutely vital as this build was designed around the Vancian Magic perk. This perk gives you access to an alternative magic system, wherein you are granted a number of ‘spell slots’, or opportunities to cast spells at no Magicka cost but become unable to cast spells once those spell slots are expended. This allows you to cast spells normally above your pay grade as long as you have spell slots, which is useful to say the least. Alteration spells and perks are also used to further enhance the Eldritch Knight's survivability and combat prowess. Other key perks include:

One-Handed. The Eldritch Knight relies on trusty swords and looted arms to slay their enemies in battle. No amount of fireballs in the world can replace the effectiveness of a good sword to the chest or a mace to the head. I opted to focus on the 'sword' path of the perk tree, but you are free to go for axes or maces without much problems. In the end, you will be hacking and slashing and smashing with the best of them. Key perks include:

Heavy Armor. To be a Knight is to be protected well. For the Eldritch Knight, this means Flesh spells and heavy armor. They will shrug off lesser attacks and paltry hedge magic in equal measure, allowing them free rein in the chaotic battlefield to pursue important targets, like powerful mages with spells you can't shrug off. Key perks include:

Block. Another manifestation of the Eldritch Knight's defense is their skill with shields and warding off attacks with them. With a good shield arm up, they can soak up even more damage or ready up Timed Block to interrupt a potentially fatal strike. Key perks include:

Destruction. Evoking and manipulating arcane energies to manifest as the elements, Destruction magic comes naturally to the Eldritch Knight (if the presence of Flames in their spell list at level 1 is of any indication). With Vancian Magic, the Eldritch Knight makes great use of powerful destruction spells like Fireball, Lightning Bolt, Frost Nova, and Runic spells to complement their swordsmanship in combat. Key perks include:

Restoration. When push comes to shove and the enemy brings death closer, the Eldritch Knight can rapidly restore health through evoking Restoration magic. As long as you're smart with your spell slots, your Eldritch Knight will always have room to cast a quick Fast Healing or two in a pinch to get you back in fighting condition. Key perks include:

As you can see, the Eldritch Knight is a no-crafting build. Ideally, your Eldritch Knight will have never touched a forge or workbench in their life because honestly? Your life is better spent finding your equipment rather than making it. You will mostly be equipped in items you obtain through quests or simple dungeoneering. Periodically finding substituting your loadout with better and better gear gives a nice sense of progression and forces you to make some real tough decisions. Is this Flawless Glass Sword of Shocks going to be worthy of replacing my Dawnbreaker in the long term or are you better off selling it?

Below is a spread of what equipment is worth keeping should you encounter them, and what equipment I ended up using in my own playthrough. Every adventure will be different, keep that in mind.

Weapons - Absorb Health or Stamina Enchants are great for keeping your vital resources at a good level. Some artifact weapons like Miraak's Sword and the Gauldur Blackblade are also solid choices. I personally stuck with Dawnbreaker for the better part of my playthrough as my travels with my Eldritch Knight invariably took me to the Draugr ruins more than any other dungeon.

Armor - Enchantments for your armor is going to be inconsequential as you will ideally be looking for better quality, so take what you can get and continually cycle through better materials as you find them. In my playthrough, I was fortunate enough to find Nordic Carved Armor on a Bandit Chief much earlier than I expected so I stuck with that for most of the run. I also cycled between the Helm of Yngol and the Nahkriin Mask as my headgear.

The contents of this Elder Scroll remain unintelligible. It may be wise to come at a later date when it is completed.