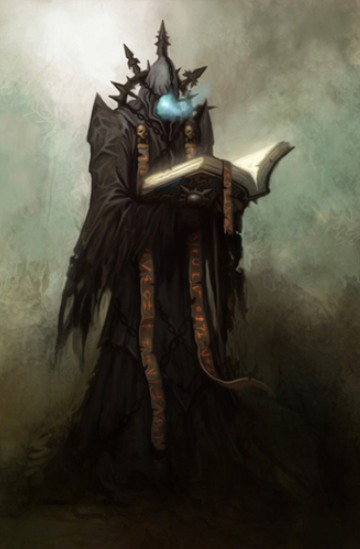 Hail, adventurers! In case you missed it last week, we've got the Character Build Showcase series back up and running. In last week's post we highlighted an amazing build that focused on hunting down mages with a fiery passion while avoiding any use of the foul arcane arts. This week we're featuring a character that is precisely the sort of mage that Shadon's Mage Hunter would have liked to snuff out. Lazareth the Risen by Lee Fiskillis Carpenter! Here's a quick excerpt from the build to give you an idea of what its all about.

Many Necromancers believe that achieving the state of Lichdom is the ultimate goal of Necromancy. Very few Necromancers have succeeded in becoming a Lich. Ascending to Lichdom is an extremely risky endeavour, and it is unique in some ways to each Necromancer who attempts it. There is only one known path which is somewhat well-known but most of the details are well hidden.

Lazareth is a truly dastardly character, with a major focus on impressive roleplaying and personal objectives. Not only is he himself an accomplished Necromancer, but he is capable of hunting down and destroying any other necromancers who might seek to oppose him with brutal efficiency. He makes effective use out of both the Ritual and Atronach Stones, allowing him to both raise his own armies of undead and counter those of his dangerous contemporaries.

This build features not only cool gameplay mechanics, but very deep multi-stage style of roleplaying reminiscent of something like the Alchemist's Apotheosis from BlackBlood. Lazareth begins his journey as any other necromancer (albiet a skilled one) and embarks on a quest that leads him down the dark road toward Lichdom. From there, you can enjoy god-like gameplay featuring insanely strong Thralls, armies of undead, and icey magick colder than the hands of Death himself.

If any of this interests you, please click the link above and give it a read. Although it is a bit of a long one, its worth every second of your time that you can spare. With everything from trickery of Daedric Princes to betraying loyal followers and raising armies of undead, this is the ultimate necromancer playthrough for anyone who has been looking to get into that archetype while also getting a fresh experience.

This is a terribly underrated build, so please don't forget to leave a like and a comment if you do get the time to drop by.

We'll be continuing this series of highlights next week, and who knows? YOUR build might be featured here on the front page! We've got such a creative community here with a lot to offer, so keep building adventurers! Glory awaits!