Welcome all, to the next lore article and the first to be about the East Coast. Today I will tell you about a shining star in a dark and dangerous place. I a talking about Diamond City. So, enjoy the article! 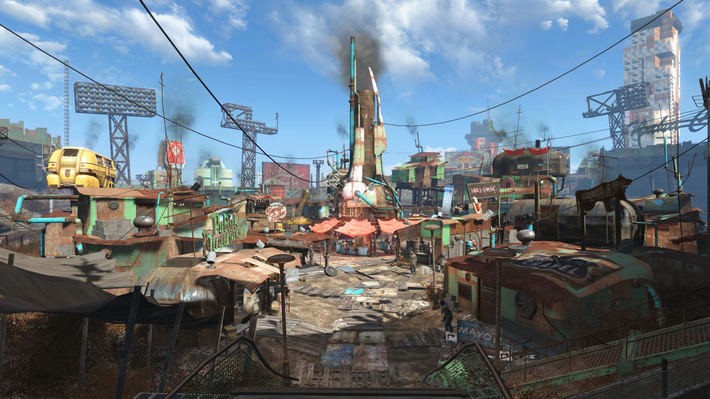 As you walk up the Riptide Bridge, named after the Pre-War tug boat rammed into it, you will be met with signs guiding you forward towards the "Green Jewel". The largest settlement in the Commonwealth. It's name is Diamond City. After you pass the first city block, you will lay your eyes on "The Wall", the monster guarding Diamond City. Altough when people say "The Green Jewel", they describe the settlement itself, the real "Green Jewel" is the Wall. If not for it, the settlement wouldn't even exist.

There are many guards around the gates and several scouting parties around the block on rooftops. The location on which the City is built are the ruins of Fenway Park, the home of the Boston Red Sox, a Pre-War sport team, famous for their baseball history. Showing the history of the location are the city guards as they are wearing baseball jerseys an umpire pads as well as helmets.

Diamond City, The Great Green Jewel of the Commonwealth, was founded in the 2130s and quickly grew in size as one of the few safe places in the Boston area. However, a dark side grew as well. Pretty soon, social segregation set in as the wealthier residents bought the upper stands close to the mayors office. Those on the ground were treated as dirt. Diamond City was also the place were the Commonwealth learned about the Synths and the Institute. Nowadays, people are scared to venture outside and they don't even feel safe in their homes. It may not seem like that, but the City is full of fear and panic, waiting to explode on itself. 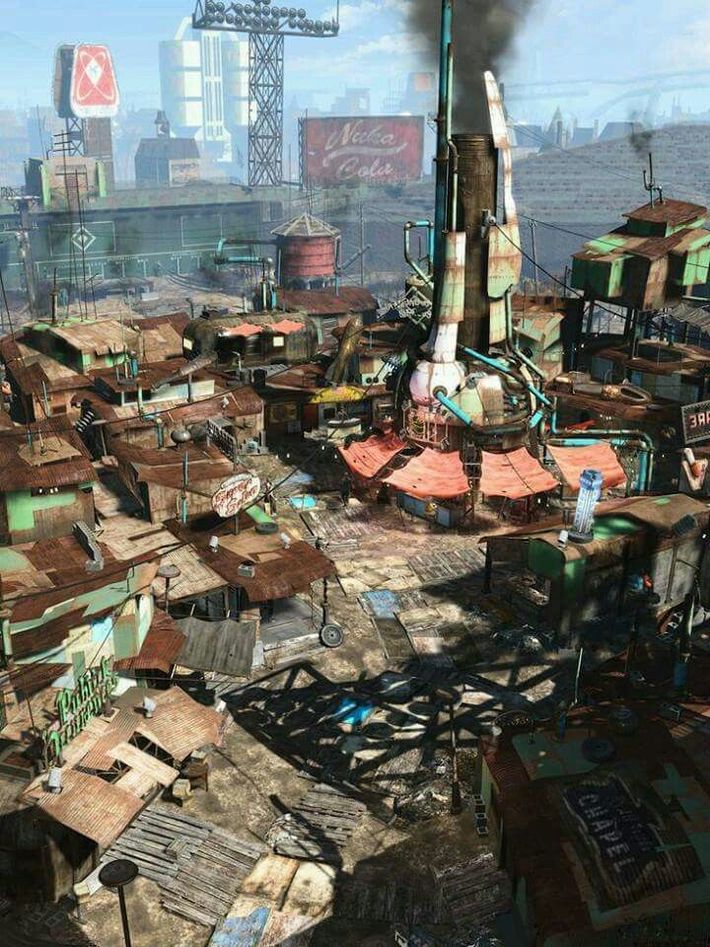 As you enter Diamond City itself, you will be greeted by a big chimney in the middle. At it's base is the restaurant name Power Noodles, run by the Japanese speaking Protectron called Takahashi. Most lower stand residents come here to eat.

Before you enter this center area, you will come upon the Chapel on the right which welcomes all religions, Pre and Post-War. On the left is one of the more interesting locations in the City, the newspaper agency called Publick Occurrences. It is run by Piper Wright and her sister. Some say that Piper helped the famous Sole Survivor from Vault 111.

The area around the Power Noodles is the City Market. There are several shops here, but the most important are:

Commonwealth Weaponry - Run by Arturo, this is the best place for buying weapons, not just in Boston but the entire Commonwealth. From pistols to heavy weapons and a few surprise pieces, the shop has an endless line of customers. The shop also has an exterior weapon workshop where you can modify and maintain your weapons for a modest fee.

Swatters - The best place to buy premium baseball bats, both common and "weaponized". The owner, Moe Cronin, loves to tell buyers of the sport game that people used to play with these bats before the war. It was a battle to the death, like the gladiator arenas of old. Any Pre-War ghoul will tell you that is far from it.

The Clinic - This is one of the most important places in the City. You get hurt, you come here. The doctor will heal most wounds for a price. I remember when I got a nasty slash from a Deathclaw. The bastard took 35 caps for a few stiches.

Diamond City Surplus - Run by the paranoic Myrna, you can buy everything here, altough most of it isn't very well mantained. Myrna doesn't trust anyone and will not trade if she thinks you're a Synth. At night, the store is run by the only robot she trusts, Percy, a Mister Handy. Around the center of the City, you can find the Butcher were you can buy meat from many of the wasteland creatures, altough it's mostly Brahmin meat. Many people that fancy themselves trappers come here to sell their meat and skins. Close by is also the Dugout Inn. Most people consider this place a den for criminal activity and while that is true, it is a general place for all tough guys. Criminals making plans and mercs telling tales of their battles over a drink. I can't reccomend the place enough. There's always a job waiting to be done. Again, visit the Dugout!

On the outskirts of the City you can find the farming fields. Near them is an elevated platform from witch the mayor, Mister McDonough, gives his speeches. Excuse me for my bad language, but that guy is full of shit. Near the farm is the Diamond City Radio, run by Travis Miles. The boy is a little shy so don't expect much. There is also the Water Purifier, run by a kid named Sheng Kawolski. He's always running around fixing water pipes.

I hope this little guide gives you a good perspective of Diamond City. Be sure to visit when you can and tell a couple of war stories in the Dogout Inn. The whiskey is on me!