Hello everyone and welcome, to the first lore article in the Fallout Lore Group. For the first, I wanted to record a special group of people. One's we see so often and yet, hate with all our being. Yes, I am talking about the Raiders, specifically, the West coast Raiders. The scourge of California and Nevada. 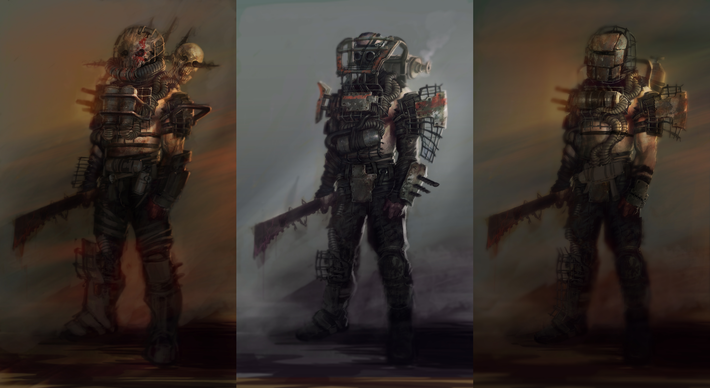 "Raiders roam the wastes. Bandits out to pillage, burn and rape. They have no love for order, only chaos."

Raiders are people or groups of people that banded together for survival. However, instead of farming, building towns and communities, they turned to robbing, murdering, plundering and raping. They enjoy the thrill of killing and stealing. They form small gangs and attack, travelers, small camps and farms, and light caravans. Due to their small numbers, they stay away from bigger towns or well armed groups. They are a constant threat for wastelanders.

Vipers are a Raider group that migrates every now and then from California to Nevada and back. 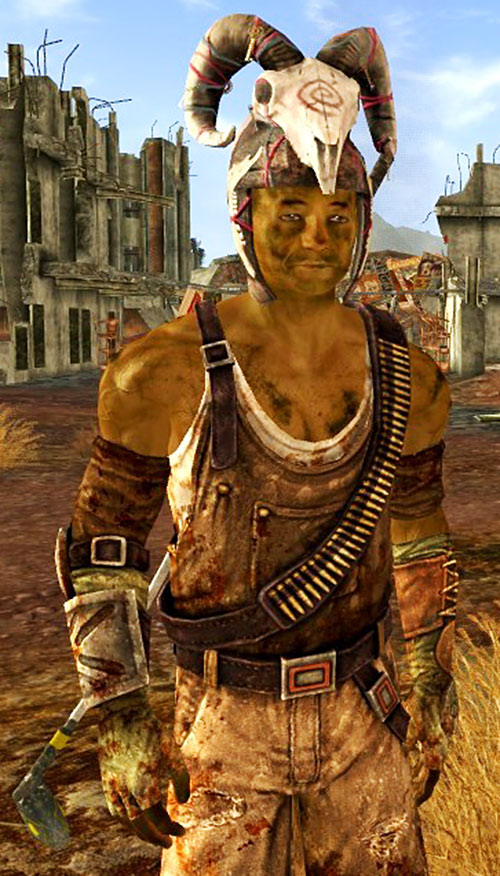 They believe into a, what they claim it is, ancient religion. Not much is known about this as Vipers

aren't captured alive and those that are, never talk about it. Vipers hunt and raid at night, using

stealth and hit and run tactics. They are known cowards and will run at first sight of trouble.

They use melee weapons and bows. They are known to put viper poison on the tip of arrows

and blades. This poison paralises the victim, after which the unlucky person is dragged deep

into the hills, where they are raped and murdered. Some are even eaten. Never travel alone

in Viper territory, or you might feel their poisonous bite as well. 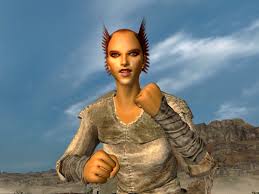 Jackals are your typical wasteland lunatics. They believe they are wild dogs in human form and they act as such. They attack when they know they're going to win the fight. They leave non alive in their raids and fight over the plunder like the animal they're named after. As they attack, they make noises of wild dogs and are known to make barking sounds as they massacre caravans and travelers. They are known cannibals. You can spot a Jackal in hiding by their shaking hands. The shaking comes from the Kuru disease which develops after eating human meat, easpecially the brain and spinal cord. As always, when in Raider territory, travel in large groups or well armed. And never take your eyes of the hills. 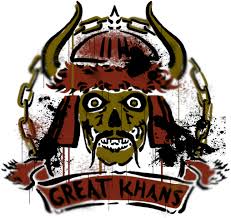 Great Khans are an interesting group. Make no mistake, they are like other Raiders. They pillage, burn, murder and worst of all, take survivors as slaves to work in their camps or they sell them to the Legion. Where the Khans differ from other Raiders is that they blur the lines between savage and civilized. They are not a small Raider gang. They are a nomadic people that live in large communities of several hundred. They highly resemble the Mongols of old, down to the tiniest details. How they live, wage war and socilize. Great Khans value strenght above all. It's common to see fist fights. Those that brake their rules are given a chance the redeem themselves in arenas where they fight to the death. If someone they attack shows great strength, they are given a chance to join the Khans or continue on their way without further fear of attack from them. If you know how to fight, you have a higher chance of survival with these people.

There is one more Raider group that operates on the west coast, specifically in the New Vegas ruins and the general New Vegas area, but because of the gang size and it's various leaders and their styles, they will be given their own Lore Article at a later time.

When traveling through Raider territory, try to have some back up, weapons in good conditions, decent armor and never stop moving, unless camping. Set up a watch at night and most of all, if someone seems suspicious or comes from the hills in ragged armor, shoot on sight. Especially when dealing with savages from the West Coast.

Authors Note: Sorry from some bad editing, I had a ton of problems with one of the pictures and this is the best I got. Hope you like the Article and see you next time!!!