Hammerfell's most secretive military faction has been able to remain hidden for centuries. The skills required to become a member of this force are what makes them, as a whole, able to stay in the darkness. Compassion, power, stealth, cunning, accuracy - these are the hallmarks of Hammerfell's special forces...the hallmarks of the Clan of Light.

The Clan of the light is such a reclusive faction that even knowledge of their name is rare. An ancient Sanction gave them autonomy and they have carried out their mission ever since. The Sanction is the Clan's highest ranking artifact. Long encased in a shrine of sorcery forged sand glass, this document sets forth the Clan of the Light's mission and objectives and is only seen by the oldest living members of the faction. The Clan of the Light is taught to obey The Sanction at all cost and breaking it dishonors not only the member personally but the entire Clan. The member is required to end his own life instead of breaking The Sanction and bringing this shame upon himself and his people.

The Clan of the Light seldom interferes in foreign matters, only acting when the danger is great enough to directly threaten their realm. Skyrim is in turmoil. If the Dragons or the Volkihar seize control of Skyrim they will spread their ruinous deeds everywhere. If an Elder Scroll falls into the wrong hands it will bring disaster to multitudes, perhaps even all of Nirn. If the Empire is weakened by the Stormcloak uprising they may not be strong enough to defend Tamriel from a foreign invasion. Skyrim's darkness will encompass the world. This is why the Clan of the Light must step in, send an emissary to halt the corruption and bring light to Skyrim. 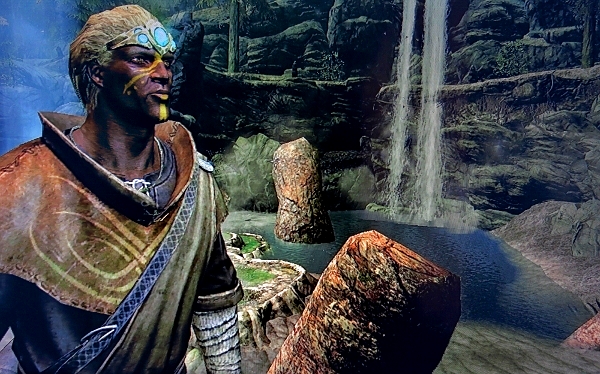 This character has honed his skills into a one of the mightiest skill sets in all of Tamriel. A master of swordplay, he prefers the mobility of clothing and defends himself by deflecting the enemy's weapon with his own. An array of ranged attacks including Archery, Shock Spells, Light Spells, Hammerfell Magics and Shouts/Powers will ensure distant enemies are under siege before they can become a threat to the character's health.

During combat you will become a whirlwind of blade, spells and shouts. Undead will flee from you or die by the power of your light. You will turn dragons to dust and send smaller threats flying into the darkness they came from.

Primary Missions: Destroy the Dark Brotherhood, Join the Dawnguard, Defeat Miraak, Civil War (side with the Empire), Stop the Dragon Menace, Help with Weapon Based Side Quests 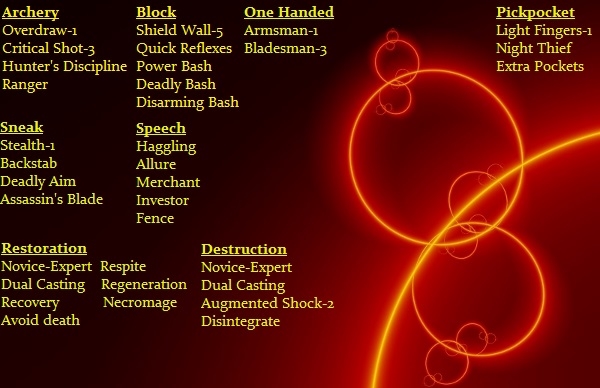 I chose a unique setup for One Handed and Archery, relying on the critical perks to boost damage instead of the first set of 5 perks. My goal was to make use of these underrated perks in a way that most others shy away from. Using Dawnbreaker as my main One Handed weapon I dealth plenty of damage even without perks. The bonuses I got from critical hits were just icing on the cake. I saw these critical hits as more of an expert attack that hit vital spots on the enemy and did more damage. Dawnbreaker, at its lowest, does 22pts of damage per attack. This character fights a lot of undead. Vampires are especially weak against it as they are damaged more by the fiery enchantment and are made to flee by the explosive Bane of the Undead effect that fires when you sometimes kill an undead.

Archery is a key aspect for this build. I chose to rely on the power of Critical Shot instead of the usual Overdraw Perks. This is why the character uses the Enhanced Dwarven Crossbow. It has the highest base damage for any bow in the game. Critical damage from Critical Shot uses the weapon's base damage. With a high base damage combined with critical damage you will have more than enough firepower. Zephyr's speed is very handy until you reach the Enhanced Dwarven Crossbow. Fire those glass and ebony arrows as quickly as you can!

Exploding Bolts add the finishing touch. Without being able to enchant your weapon, exploding bolts give you that elemental damage to help take down specific enemy types. Hunter's Discipline will aid you in retrieving more of the all important exploding bolts while the Ranger Perk will let you more easily dodge enemy arrows. Perks like Power Shot are unnecessary because the crossbow will stagger enemies without the perk.

Area of Effect attacks will let you kill the enemy while keeping yourself safe from harm. A dual cast Lightning Cloak, enhanced by bought Fortify Destruction potions, will have a huge range and do much damage. Once you get the Disintegrate Perk your cloak will become much more valuable against any enemy type. A dual cast Lightning Rune might turn the enemy to dust while you are nowhere to be seen.

Chain Lightning is a terribly effective AoE spell. You can fire it anywhere near the enemy and deal huge damage. You can shoot around corners. You can shoot behind an enemy who is using a ward. This will bypass the ward completely, deal full damage and break the ward. No enemy is safe from your Chain Lightning no matter where they hide!

Storm magic is perfect against tough or high level enemies especially dragons. A Legendary Dragon has 4163 health points. Disintegrate will turn them to dust when their health is at or below 25%. This means the last bolt of lightning can do over 1000pts of damage to this unholy beast!

Restoration is another skill mastered by this character but it is not just a healing and defensive set of spells. A series dual cast Vampire's Bane will annihilate enemy undead! Stendarr's Aura will give you a light to see by in those dark dungeons as well as protect you from the damaging effects of Apocrypha's darkness. Of course, Stendarr's Aura helps damage those pesky undead too. Dual cast Posion Runes, shot in series after the previous rune explodes, will stack to do major damage against the living.

The last Area of Effect attacks I want to discuss are the weapons themselves. Dawnbreaker will often create a Bane of the Undead effectwhen you kill an undead enemy. The more you hit the enemy before it's death the more likely you will get this explosion. This effect is invaluable during dungeon crawls with Draugr and even more impressive against all of the Vampires you will be up against.

The Area of Effect explosion from exploding bolts will allow you to "shoot around corners" and damage enemies if they are nearby. You might even get a critical hit without actually hitting an enemy directly! This does little damage but he slowing effects of Frost Bolts will be very handy against melee enemies, slowing them so you can back up and continue firing. 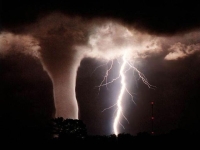 With a combination of spells, shouts and swordplay you will be able to defend yourself against any enemy, singular or plural. You firs cast your Whirlwind Cloak. Next you use your Disarming Shout to relieve some of the weapons from your foes, particularly archers. You then Power Bash any foes who manage to get close enough, possibly disarming them with your Disarming Bash Perk. Finally you use the power of Cyclone to toss both ranged and melee foes. 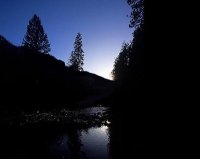 Valley of the Shadow:

Knowing when to avoid combat is part of a master's set of tools. Be proficient in Sneak and enhance your skills with this combination. Wear Shrouded Shoes to soften your steps. Use your Aura Whisper Shout to know where the enemies are. Be invisible to them, either metaphorically by staying in the shadows or literally with the Shadow Stone power. Misdirect them from your destination with your Throw Voice Shout. These can be used in any order or any combination. 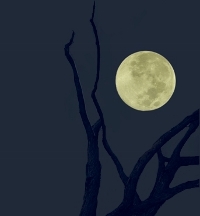 Vampires, Zombies, Draugr and any other undead will die another death, more horrific than their first. First drop a dual cast Circle of Proection to guard your position. Spam some dual cast Vampire's Bane and then Fire Bolts from your crossbow once your magicka is depleted. Stendarr's Aura and finally Dawnbreaker combine to finish off anything that creeps your way in the darkness. Hunt down any undead that are turned by your spell or by Dawnbreaker's explosive effect and remove any unholy life they have left.

In conclusion, I want to thank everyone who participated in the Group Character Build, both commentators and voters. You chose a unique setup and I thoroughly enjoyed playing it!