I've wanted to revamp this creation a bit for quite some time. There were 4 major areas I focused on with this revamp: I trimmed a lot of fat from the build making this character build much easier to level and thus more accessible to players. I shed away what I felt were needless aspects of the build. What was once a level 54 character build now maxes out at a much more accessible 43. Things were added and changed to further emphasis what makes the Brute stand out. Lastly, I gave the build a slight format and visual update as well.

All the core components you know and love about this build are still intact. You'll still tear through the enemy like a force of nature, and you'll be able to enjoy that power much sooner than ever before. Overall, I'm quite proud with how this revamp came out and I'm happy to present once again... 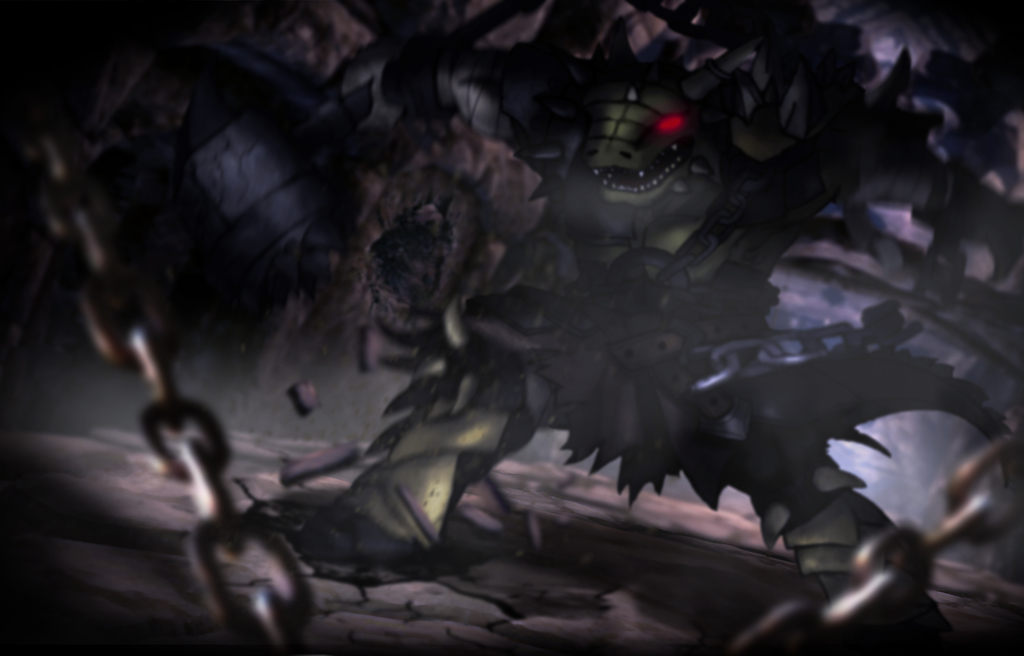 "Brutes rely on their immense strength and relentless fury to overwhelm their enemies. Regardless of the injuries they suffer, they battle on. They are like avalanches or onrushing floods in battle, veritable forces of nature that cannot be stopped, merely endured until they have vented their boundless rage. Easily a match for ten of any hold’s best soldiers, a single colossal blow from a brute’s war hammer is enough to outright kill or grievously injure anyone caught in its path."

The brute is a different take on playing a warrior. Rather than taking defensive measures to ensure survival in battle, the brute prevents his enemies from mounting a decent attack to begin with. With the constant threat of being scattered like weakling rag dolls, the brute is able bully his enemies and utterly crush them. Enemies face an uphill battle against a veritable monster, whose health regenerates faster than they can deplete it.

If you’re not afraid to throw down, fight dirty, and crush your opponents into a fine bloody paste as they lie battered and beaten in the dirt, begging for mercy, then look no further than the build that puts the brute in brutality.

Orcs are another awesome choice for this build. Their racial ability, berserk rage, allows them to push the brute's offensive capabilities to ungodly levels.

Nords are another solid choice. Although they lack the survivabiity of the argonian, or the terrifying strength of the orc, nords get a nice starting boost to many warrior skills. Battle cry can prove useful early on and it just makes sense for enemies to turn tail and run from a maniac wielding a 50lbs sledge hammer.

Lady Stone. The Brute is all about maintaining offensive momentum above all else. The Lady stone offers an increased 25% regeneration rate to both health and stamina, which compliment the enhanced regeneration from skills and enchantments quite well.

Two Handed: The main damage dealer. The immense damage dealt by your hammer will enable you to overwhelm blockers, stagger enemies, and penetrate defenses.

Block: Keeping opponents off balance, scattered, and otherwise unable to attack is a vital. Bashing and shield charging enable you to do just that.

Smithing: Strong weapons are essential. A strong enough damage rating enables you to take a sizeable chunk out of an enemy’s health bar, blocking or not.

Enchanting: Provides powerful health regenerating enchantments, which will be your only source of healing other than potions you may find along the way. Don’t underestimate how quickly a brute can recover health in combat

Light Armor: Invested into solely for the wind walker. Without stamina regeneration, your offensive momentum will run out very quickly. Coupled with the Lady stone and the Bardic Knowledge skill, you will have an impressive 125% stamina regeneration rate. Feel free to go nuts with the power attacks! Most of your stats will be invested into HP to compensate for your low defenses. With the lady stone and wind walker, a constant 75% stamina regeneration rate is possible. You'll also be enchanting for extra stamina so large investments into stamina are unnecessary. Two Handed and Blocking are your first priority. The sooner you're able to shield charge, the much safer combat against large groups will be. During your early levels your priority enchantment should be health regeneration and two handed damage, be it from accessories you find or craft yourself.

If you're looking to get those two skills out of the way as quickly as possible, take advantage of the Hadvar exploit while escaping Helgen to level up two handed. Just keep smashing him with a two handed weapon repeatedly when he stops to point out the sleeping bear in the caves. Block can be leveled up from 15 to 100 in about an hour by taking advantage of the giants by Whiterun. Simply lower your game difficulty to Novice and equip your best shield. Allow the giants to wail on you as you block. You'll gain about a full level for every single attack up until about 60 or so.

Dont let yourself get discouraged by the need for dragon smithing. Smithing is a fairly manageable skill to level up. Take advantage of the warrior stone you start out with as well as the easily attainable dwarven smithing perk. Many dwarven ruins house tons and tons of dwarven ingots as well as scraps that can be melted down into more ingots. Use those in conjunction with iron ingots to make mass amounts of dwarven bows. You'll hit level 100 easy and come away with a decent chunk of change to boot.

**Improving your armor at a forge is not necessary as keeping enemies from attacking to begin with is the point of this build. Low armor and high attack power is more in keeping with what this build is about**

The Brute charges full steam ahead into enemy ranks, scattering everyone and everything in the way like a rag doll

As you know by now Shield Charge can be done without a shield by simply mashing the block button while sprinting. Its a simple and very effective tool for bullying your enemies and keeping them too scattered to mount a credible offense. Use it whenever enemies are crowding you and you'll take most of them out of the fight for several seconds.

Through shear force of will the Brute is able withstand all manner of attacks, becoming invulnerable to damage for a brief duration. Unbreakable also grants a bonus to health regeneration and plenty of time for it to take effect.

This combo takes advantage of your incredible health and stamina recovery speeds, allowing you to recharge a sizable portion of health while immune to harm. You can easily replenish over 50% of your health over time. While bidding your time, you can toss enemies around with Rampage and it wont cost an ounce of stamina nor break the ethereal effect.

Once the brute gains momentum, he cannot be stopped. This combo pushes your offensive and regenerative capability to the limit. It's best saved as a last resort against very powerful bosses, as it is a combination of 3 once-a-day skills. Substitute histskin for health regeneration potion and throw in Berserk Rage if you're using an Orc.

Its been a blast creating this build. I hope you guys will give it a try and enjoy it as much as I have. As always, thanks for the continued support.