After a lot of time since my first build, I'm bringin to you a character concept that is one of my favorites. A unarmed monk that mix arcane magic to it's arsenal. I've played this build on Master difficulty, and it's was perfect playable, even with unarmed damage beign so  little on vanilla Skyrim.
I've tried to keep a good explanation on "why a monk is casting spells?", though. Based on the control of the vital energy that inhabit everything. So I present now... Growing up a on monastic order, you've trained hard your body and mind as weapons, but only in search of balance, understand and self-control. Or at least it should be that way...
In truth, you always had short temper and loved to fight. No matter what you've tried to avoid it, pratically everything almost ended up in a fight.
After hear about a man that killed another with only his voice, in the land of Skyrim. You decided to go there to meet this man. Maybe you can learn how he done this, fight against he or with he...
You feel the urge to test your skills in that distant and frozen land, and to train more on the control of the Chi. Maybe you find more ways to do so, on the mages college or in High Hrothgar.
What can go wrong, right? And if any trouble get in the way, you know very well how to overcome it. With your fists!

Race: Breton (my choice for the magic resistance), Khajiit (for those who want more unarmed damage).

Stats:  Health 2 /Magicka 2 - Stamina is not needed, as unarmed power attacks are slow than normal hits.

The focus of the build is the unarmed combat! So put on the best heavy gauntlets and boots you can, til you get the powerful Daedric ones. The Blades armor is for aesthetic, feel free to change it, if you want. Save the destruction to fight only enemies on distance, like dragons that are flying. Or before they reach at your fists range. You'll always prefer to bring your fists to them first, of course. The rest of the skills are pretty easy to understand where it fits, but I'll explain them...

Alteration: The essence of learning how to control the chi, is to control your own body. You can harden your body to resist even weapons blows! And by knowing how the flow of the chi works, you can even control the chi of your enemies. Causing them to struggle in pain!
This skill is used mainly to augment the defense. Magic resistance, will reflect the ability to manipulate the chi to resist even the magic attacks. Paralize and mass paralyze come in the mix on an advanced move called "Smoldering chi Blast".

Destruction: The power to use your chi to generate blasts of energy! Your control over the chi allows you to channel eletricity through your hands and your whole body.
I focused on the use of shock spells, 'cause I felt that it was the most fitting elemental magic to represent the Chi. We'll be using all shock spells, minus the rune one. (Sparks, Lightning Bolt, Chain lightning, Lightning Cloak, Thunderbolt, and the mighty Lightning Storm!)
Lightning cloak is used almost everytime you start a fight, after you've acquired it. As unarmed attacks can't be enchanted, it will be the shock augment of your blows. Whirlwind Cloak is the only non shock skill permited here, and i'll explain later, why...

Enchanting: The art of infuse some Chi power on objects and use it to strenghten your own capabilities, leting you focus all your Chi on the combat.
We'll not be using weapons, so this skill is used in order to fortify our unarmed damage and survivability. Fortify Magicka and Health are your friends here. Also fortify destruction will let you channel more blasts of energy. Try to don't let it pass over 60% of fortify destruction, or the game will become to easy.

Restoration: The Chi control over yourself allows you to recover your health faster.

The focus here is the self healing spells, not passing over fast healing. Dual casted with regeneration perk, it's sufficient to mantain you in the fight. Also, respite will help to do some power attacks when it's needed.

Heavy armor: Even being capable of hardening your body, sometimes it's not enough. When you have to punch a dragon's face or resist his bites, you may need to protect yourself a little with some metal layers, but without losing your mobility.
I was use this skill only for the Iron fist perk, but I loved how the blades armor gave a look of an chinese war general from old movies. And they fight in those heavy things like it was nothing! So i've tried to bring a little bit of it to this character.

Block: Predict where your enemy is wanting to hit you and avoid it, is a basic defense technique.
This skill is used only for the quick reflexes perk. The trick here is to put a dagger in the hotkey, so you can equip it, press block and unequip it, while mantaining the block pressed. So you'll keep blocking with your bare hands. This is used only to activate the "quick reflexes+slow time shout"
glitch. Which will make a single word of the shout, last a huge amount of time. On pc, you can download a unarmed block mod, that allow you to do it without the dagger, to easy the things. 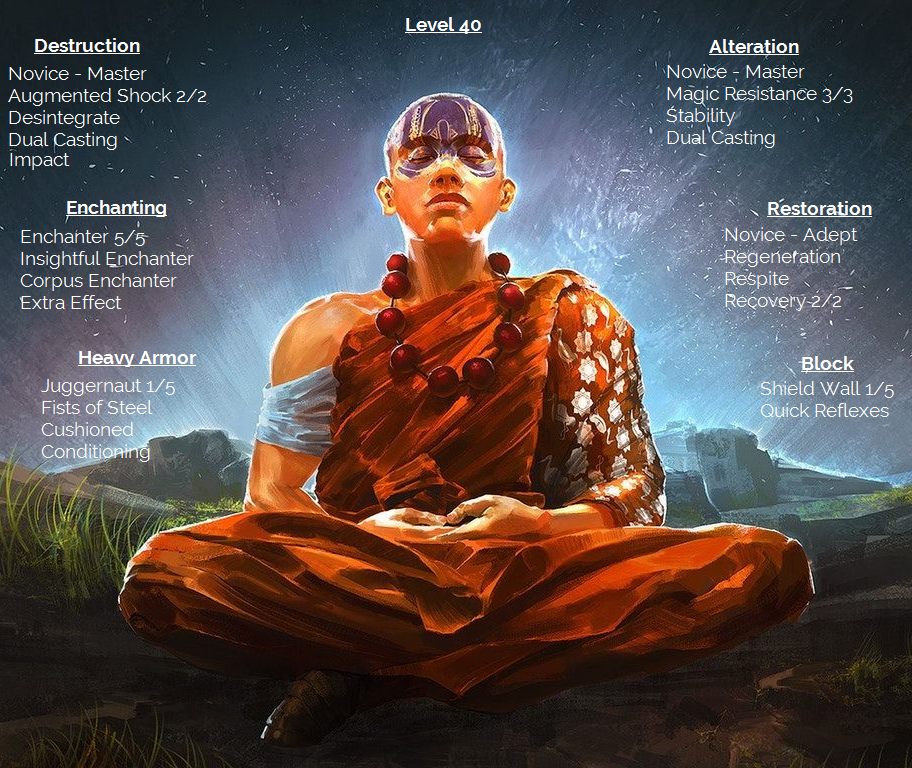 So to closing this part, I've used Jenassa as follower almost the entire game. My end game gear was this: 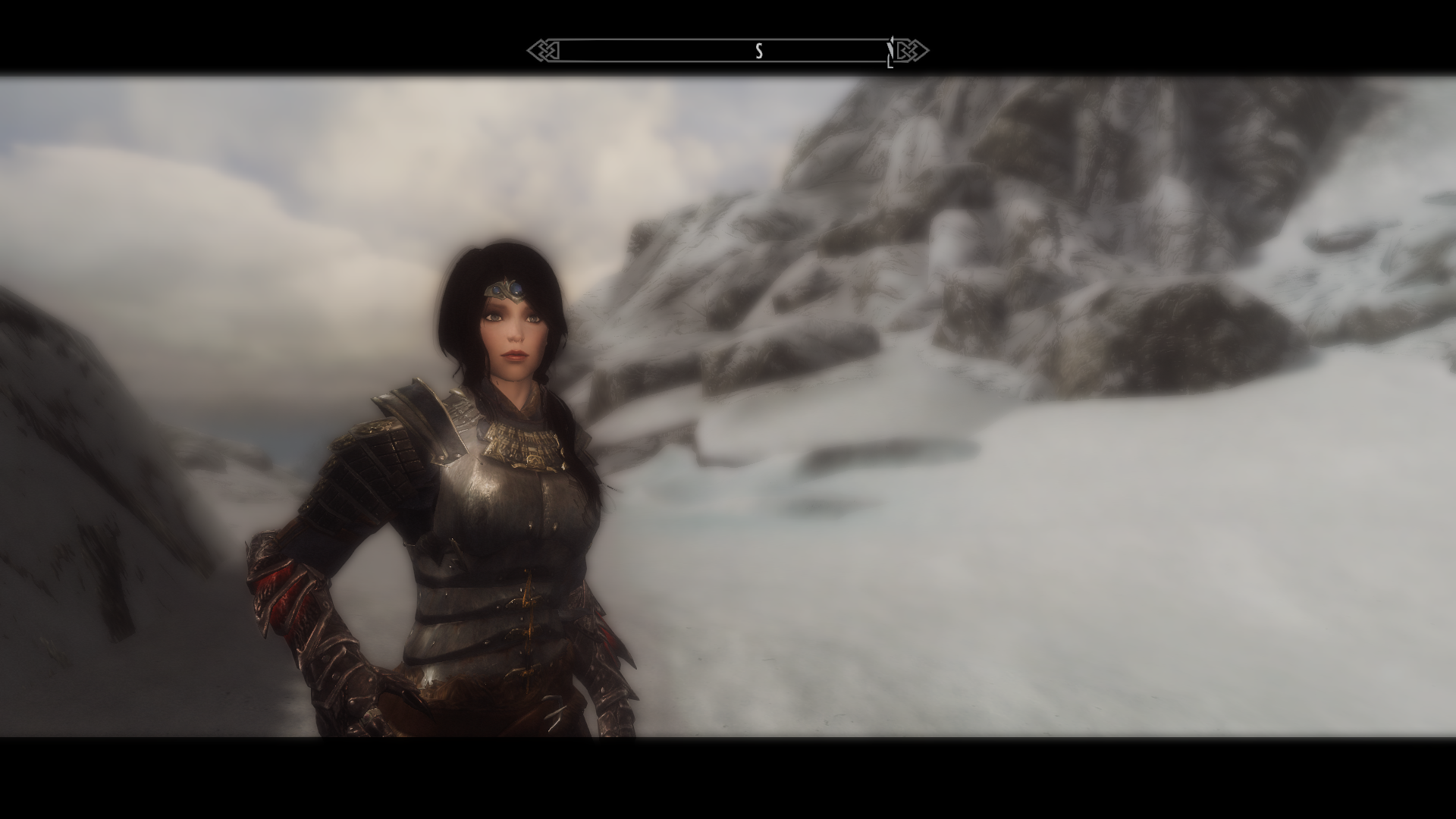 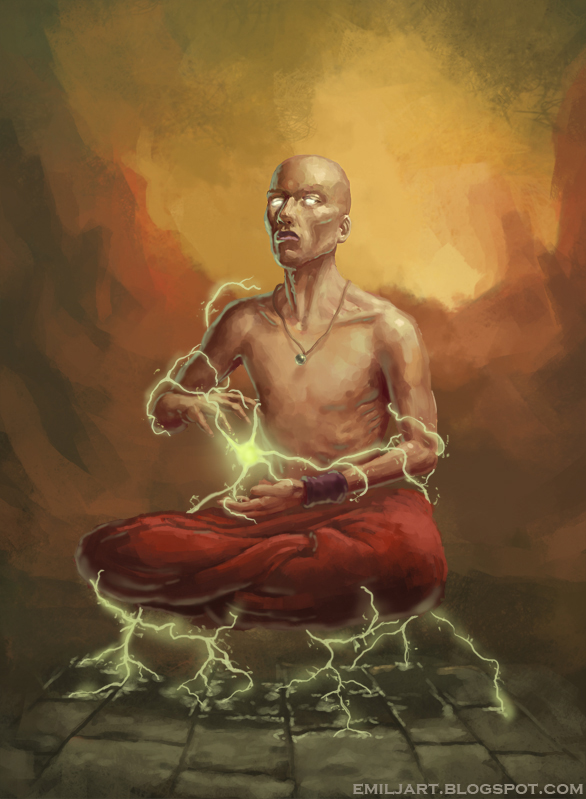 Flight of the Dragon

Your Chi augmented Kick is powerful enough to make your enemies fly away!

This Skill is used to knock enemies on their feets. So you can manage to face lots of them at once without danger. Or to fight a single too powerfull enemy, in a more easily way.

Your manipulation of the Chi make you be able to move on the speed of a lightning!

This move must be used only when you have at least a single handed Lightning cloak casted on yourself, as it will reflect the Chi acting in your body. By spamming the slow time shout on the end of the Quick Reflexes animation, you can extend it's duration far more. The stability perk will make it last even longer.
This is your bread and butter! Use it everytime, every combat, to simulate a superhuman speed, acquired by infusing the lightning Chi power, on your own body!

As you get stronger, you can now generate a powerful shockwave with an explosion of your chi, sending your enemies flying away or even desintegrating them.

With the glitch "QF+ST", plus the Talos Blessing+amulet of Talos, the cooldown reset fast enough for this skill to be used when the effect is end. This should give you enough room to rebuff, and prepare to get on the fight again. Some enemies will be completely destroyed by the huge force created.

With a blast of Chi, you make the body of your enemies twist in pain like it is burning from inside. The agony is so great that they can't even move for a while.

As we'll be using unarmed as our main kind of attacks, we need a way to improve the dps a little bit in order to fight some strong enemies in late game. This is the form where you'll get this extra DPS. Marked for death will sap the target's defense, as you give each punch. Paralize is used
just to give a little time for the shout to start to work. Don't use this and waiting hidden till de defense of enemies get low, or the game will become boring... you should be hitting, and seeing the damage get higher!

Manifesting a huge amount of Chi energy, you channel one powerful blast of lightning from your hands. This energy is so strong that it changes even the atmosphere, making other lightnings fall from the sky, around you!!

Requires: Dual Casted lightning cloak + Storm Call + Lightning Storm + Disintegrate.
I'm serious, this move had killed everything i've used it on, during my playthrough. I always play on master difficult and even though, the enemies couldn't resist too long. I've saved it only for dragons and bosses. To improve the badassery, this should be used with Lightning cloak ON, cause the energy is "flowing through your whole body"!!

As i've said before, you love to fight. Despite every efforts you've made to hide it.. So enjoy the fights. Test your limits. But at no cost, do some evil thing. That being said, to get marked for death shout, you should kill the dark brotherhood. The college is just a place for your to train your chi and study it, so don't do any of the tasks of that questline.
The Book of love should be done to get magic resistance to highr levels. Frost flow Abyss will give us a boost to our restoration.

The Black book: winds of Change should be done in order to get companion's insight. As we'll be using Chain Lightning, Storm Call and other Spells, it'll help to keep our followers out of the harm way.

Discerning the transmundade will boost ou abilities with the chi, as we gain a better understanding about the Mer...

The dragon cultists tried to mess with you, give them what they deserve. Search for this Miraak and make him pay for crossing your way.

And at last, the main quest. Alduin is the very trully powerful enemy you ever wanted to face. This fight should test your skills to the limits!! 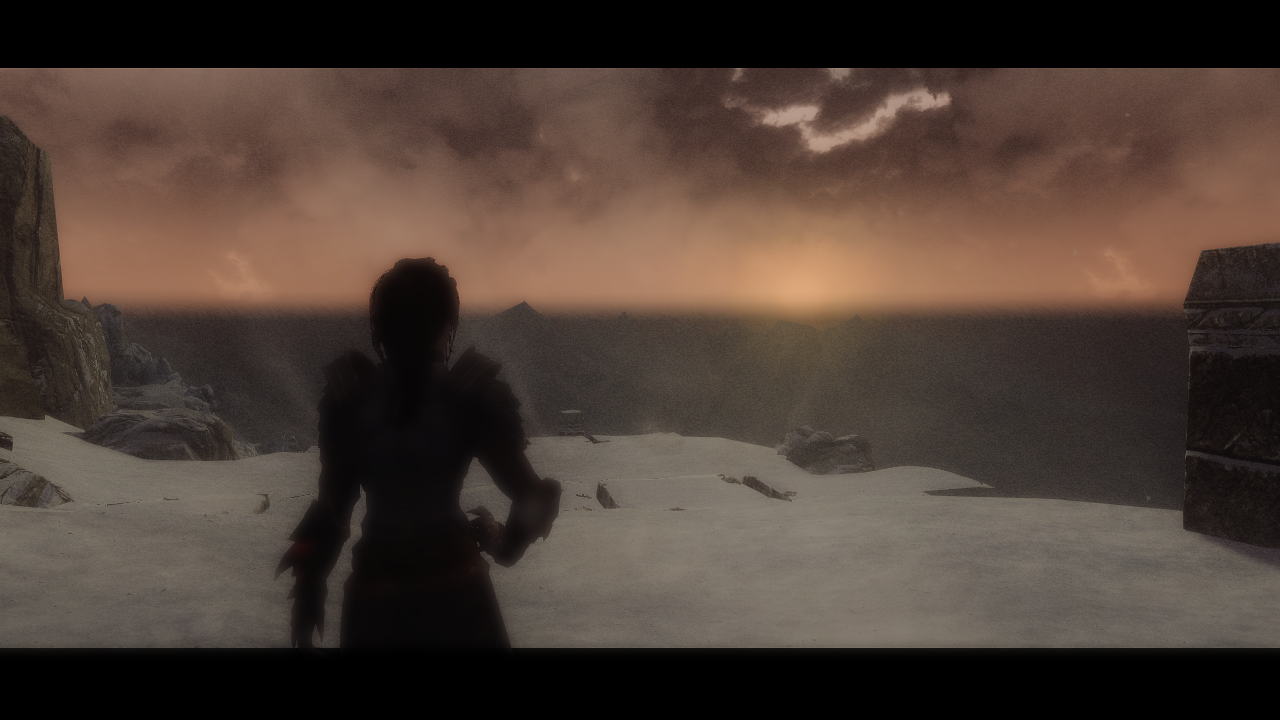 The view from the top of High Hrothgar, it's indeed a good place to meditate...

Unarmed Warfare: Awesome unarmed attacks animation pack. Full With kicks and the sort of things. Worth to try!

Fight like a badass: This mod makes you able to give killing blows on Dragons, Spiders and etc... This is gem for this build!

Skeleton Killmoves Unlocked: This one make you able to give killing blows on Skeletons. Another gem!

Ahh, I've wanted to post this a long time ago. The routine was killing me lol. Now that I manage to have time again, I finally finished it. Hope you all enjoy it!!
THX!