This build is something of a mashup between the Paladin, Arcane Bladesman and Nightingale Swordsman - 3 of my favorite builds. The result is a fun, fast paced character with plenty of options in and out of combat. I hope you enjoy reading (and even playing) this guy as much as I did writing and playing him! Dragonborn DLC spoilers will follow; read at your own risk.

I am yours to command, Lord Miraak.
You have grown only stronger since I called you to serve.
You honor me with your gifts, Lord Miraak.
I have a task for you. You shall go to Skyrim, and recover the Dragonstone of Bleak Falls Barrow. I hear whispers on the tides of fate of the return of the dragons; when I too return, their souls shall be mine!

A former cultist in service of Miraak, the Prodigy has broken free of Miraak's control and now seeks revenge on his former master. He is a quick and deadly warrior, skilled in the arts of magic, stealth and the Thu'um. The Prodigy wears clothing over armor to move swiftly and silently, and wields Restoration as well as Alteration magic and a shield to defend himself. As a skilled smith, he can craft and improve his sword and shield, and can also enchant his equipment. The Prodigy's true strength lies in his Thu'um, able to silenty propel himself and enemies around the battlefield, strike terror in his foes or bend them to his will. He also uses the Black Book, Waking Dreams to tap into the infinite library of Apocrypha and distribute knowledge as he wishes.

Race: With such a broad array of skills, the Prodigy can be of any race. I chose Nord for roleplay reasons.

Stats: I recommend leveling 2/4/3. The Prodigy is primarily a melee combatant but a large magicka and stamina pool means he can survive almost any foe.

Ambushed by soldiers of the Empire.
A dragon destroys the village.
Did Lord Miraak send it? I think not.
My mind was once clouded, but Miraak holds no power over me here.
If dragons truly are returning, then these people will surely perish.
The wizard shall have his stone.

One-Handed: The Prodigy is skilled in the piercing and slashing attacks of the blade, by which many of his foes meet their end. Swords are the weapon of choice here due to their quick speed allowing for better blocking - Bladesman perks aren't taken until higher levels. Key perks are really just Armsman and Fighting Stance.

Alteration: The Prodigy uses the Alteration school of magic to protect himself during combat. Ebonyflesh with 3/3 mage armor protects you roughly the same amount as an unsmithed set of Daedric with 5/5 Juggernaut and 100 Heavy Armor - without any of the weight! Key perks are up to Expert Alteration and Mage Armor.

Block: The Prodigy wields a shield to protect himself against melee and projectile attacks. The armor rating of a shield is, in fact, not based on either of your armor skills, nor does it interfere with Mage Armor. Some fighters use their shields to guard them from spells as well, but the Prodigy uses Wards and Shouts for this. Key perks are just Shield Wall and Quick Reflexes at higher levels.

Sneak: The Prodigy can move silently when he so wishes, and can deliver devastating sneak attacks when undetected. Key perks here are just Stealth and Backstab - as the Prodigy wears only clothing he makes very little noise from movement.

Illusion: While the Prodigy rarely practices the arts of Illusion magic, the technique of casting spells silently also applies to Shouts. This allows the Prodigy to move around very quickly, displace, scare and even dominate enemies without being seen. I perked up to Apprentice Illusion (for leveling) and Quiet Casting, and then retrained the Apprentice Illusion perk elsewhere using Waking Dreams.

Smithing & Enchanting: The Prodigy can create, maintain, improve and enchant his equipment. Key perks in Smithing are up to Advanced Armors - I leave my weapon and shield unenchanted and clothes can't be smithed - and for Enchanting just ranks in Enchanter (I suggest 1 rank every 10 levels to keep yourself from becoming overpowered). The Prodigy overpowers this Reaver Lord on Solstheim

For the Prodigy I developed a stylish, effective and roleplay-friendly equipment set.

I left my Nordic Sword and Shield unenchanted to save a perk in Smithing and to use Elemental Fury. At higher levels you could enchant the shield with Resist Magic or Fortify Block. Remember to keep improving the weapon and shield - the shield grants a pretty big chunk of AR (38 at Epic quality). With that on top of Ironflesh (3/3 Mage Armor) and the Lord Stone you're sitting on a tidy 328 AR - and you can use Dragon Aspect to boost that by another 100.

The Prodigy has little need for other items like scrolls, staves and potions, although he does make use of purchased Fortify Restoration potions in conjunction with the Amulet and Blessing of Talos to drastically decrease his shout cooldowns (by up to 60%).

I command the souls of dragons as Miraak does.
The Greybeards tell me my Thu'um is strong.
Could I bend the minds of men and dragons to my will?
Could I take on the aspect of the dragon to destroy my foes?
Could I rid myself of Miraak forever?

From the Thu'um to his skill at arms and silent step, the Prodigy has a lot of options for any given situation.

The Prodigy's shouts are mainly based around support and control than dealing damage.

The first shout the Prodigy learns is Unrelenting Force. As you all know, this Shout can be used to stagger or knockdown groups of enemies. I prefer to use only the first word in open combat - it staggers most enemies and has a very short cooldown (particularly with 60% shout cooldown reduction). With Quiet Casting, Unrelenting Force can be used to assist your side in a Bend Will fight without getting directly involved, or blast a foe to an untimely death without anyone noticing. 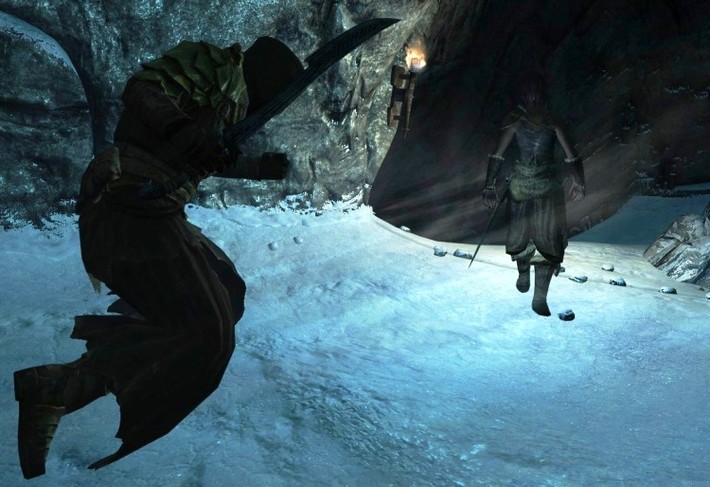 Become Ethereal is a hugely useful Shout for a light armored character, allowing him to quickly negate powerful attacks. The Prodigy primarily uses this to avoid powerful ranged attacks, such as mages with area spells and a dragon's breath attack. With 60% shout cooldown, the duration is roughly the same as the cooldown rate! Another use of the Shout is in general combat, as power attacks made from an Ethereal state don't use any stamina.

The Dismay shout can be used to strike terror into the minds of the Prodigy's foes. When using all 3 words it only affects up to level 24 enemies, though this can be used to scatter lower leveled humanoids and animals. Using this shout on a mixed group of foes will cause the weakest among them to flee, leaving you to battle the strongest among them alone. Using Dismay with Quiet Casting will send targets fleeing in the opposite direction, while other enemies will come searching for you.

The Dragon Aspect shout is only usable once per day, so make sure you use all the words you know! This shout gives the Prodigy a huge boost to damage and protection, can summon a powerful ally, reduces his Shout cooldowns by another 20%. With 80% shout cooldown reduction, Bend Will (2nd word) has a cooldown of just 18 seconds - shorter than the duration of the effect!

Aura Whisper can be used while sneaking with Quiet Casting to reveal enemies in a large area around the Prodigy, if only briefly. It has a very short cooldown though.

Finally, the Prodigy learns to master Miraak's shout, Bend Will, to command men, beasts and even dragons. A seriously overlooked part of this Shout is the second word. With a much shorter cooldown than the third word, it can be used to dominate almost any humanoid/animal enemy for 30 seconds. The best part about this, however, is that the shout is designed for hitting dragons. This means it has a massive range and a very wide projectile, allowing you to enslave large groups simultaneously. This can quickly turn the tide in a difficult battle, and dominated enemies regard you as friendly, meaning easy assassinations. With Quiet Casting you can cause chaos amongst foes while remaining hidden, or turn enemies into friends, letting you bypass or easily sneak attack them. When you attack a bent enemy, other bent enemies will assist you in killing your target. The best part is than enemies that attack each other while bent will continue to attack after the effect ends, or until the Prodigy makes himself a larger threat. While the Prodigy does have a powerful selection of shouts, he still needs to use his blade to kill enemies - and that means getting in close. He prefers getting in unseen and then landing a first devastating strike. Whirlwind Sprint is by far the best tool for doing this once you have Quiet Casting. After landing a sneak attack, throw on a Flesh spell and get out your shield - assuming you've been spotted of course! When fighting up close, try and either avoid or block every attack, using your speed to your advantage. While you can still take a few hits, you should keep in mind you're no juggernaut in heavy armor. A very important part of the Prodigy is to know when to be on the offensive and defensive. Make sure to press the attack when you have the advantage, and be careful when fighting large groups or tough foes. Remember that a quick shield bash, Unrelenting Force or Bend Will can quickly turn the tables in your favor!

I made use of two Black Books, Waking Dreams and Epistolary Acumen. Waking Dreams lets you shift perk points around as you wish (paying with Dragon Souls, of course), which is particularly useful for leveling. As I mentioned I used Apprentice Illusion for leveling up to 50 and then shifted it elsewhere. If you choose to do so (I recommend this on Master/Legendary if you're having trouble) you can shift all your points out of crafting skills after crafting your equipment of choice - that's upwards of 6 perks saved. From Epistolary Acumen I took Dragonborn Force, which makes Unrelenting Force deal 10/20/50 more damage, and disintegrates enemies it kills - particlarly useful when fighting Necromancers.

Don't be afraid to just dive straight in - you don't need be sneaking around everywhere.

As you would know by this point, I played the Prodigy as a former cultist of Miraak, released from control and out for revenge. I spent my time in Skyrim accruing power and knowledge, using locations of specific word walls to guide me around the world. This approach leaves any and all of the factions open to be joined.

Of course you could adapt the skillset and race to have your Prodigy allied with say the Thalmor (Thalmor Robes, Ebony or Elven sword and shield) or House Telvanni (Telvanni Robes, Chitin or Bonemold Shield, Elven sword).

So my servants have failed to kill you, prodigy.
You know why I'm here, Miraak.
Mora has forseen this - it was your destiny. Join me, and we can rule Tamriel together as master and student!
No. There's only one way this can end! Miraak and the Prodigy battle to determine the fate of Tamriel

All in all this build was very fun to play, a good mix between support magic, exploring some Shouts that don't deal direct damage and my favourite sword and board gameplay. Don't forget to leave feedback below, and if you choose to play the Prodigy don't forget to let me know how that goes!