We are an old order, older than the modern Empire even. We were created by a sect of  the Alessian Order, as a secret weapon. Our blood would be infused with vampiric and lycan blood, and our eyes replaced with those of daedra. This process gave us enhanced senses, speed, strength, and other supernatural abilities. We were sent to hunt, under cover of night, vampires, werewolves, Daedric Cultists, and Mer and those who would consult with Mer. To stave off our thirst for lifeblood, a renowned alchemist and inventor of the order, known simply as Antoine Germaine, crafted synthetic blood for us to drink. Our order lives now, even in the 4th Era. We are the hunters of the dark, the darkness that serves the light,  the swords in the shadows, we are.... 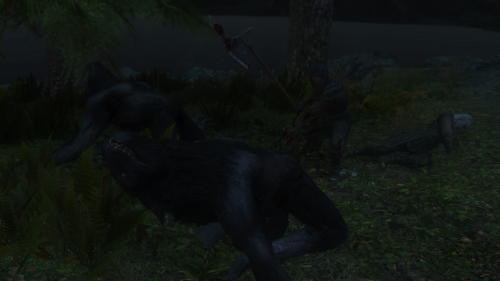 A Venator after a successful hunt

Race: The Sanguis Venators take members of any race that wishes to fight the darkness, both that have fangs and claws, but those that wear the guises of honest men. Personally, I went with a Breton Werewolf, due to Dragonskin, an innate 25% resistance to magical attacks, and bonuses to Conjuration, Alchemy, and Speech.

Standing Stone: The Advanced Lady. Among other such things that this new blood gave us is enhanced healing abilities. A Venator can heal wounds in minutes that would take days to heal, and recover quickly from strenuous activity.

The Sanguis Venator is meant to be mobile. Stealth should be used for two purposes. The first, is surveying an area. Drop into stealth, and find a good vantage point. Carefully observe your enemies. Are they mages? Charging two-handers? Are they dressed in only Ragged Trousers? Then they’re probably Werebears. Stealth is also used to begin combat. Using a poisoned bolt for non-undead enemies, or an exploding flame bolt for general purposes, hit the strongest foe, and, if you sent an exploding bolt into their flesh, then wait for the Michael Bay-esque BOOM as you douse your foes in a mix of fire and poison. When they do detect you, lay down a Rune, fire for undead and non-Dunmer, Frost for warriors, Shock for Mages, and Ash for general disabling. Fire off bolts as they draw near. Once they’re nearly upon you, its time to axe them a question!

....Yes I went there. Anyhoof, switch to your Headsman’s Axe, which not only has the longest reach of all battleaxes, but looks pretty badass. If you have Dragonborn, and either cannot, or do not wish to grab this nifty axe from our favorite Solitude Redguard executioner, then the Nordic Axe is a fitting replacement. With your axe, try and keep moving. Quick Reflexes will allow you to “parry” an attack with a bash, or allow you to side-step an attack, and counterattack.

While playing through the build, until I settled on going Two-Handed, I switched between a battleaxe, and a waraxe, preferably a Dawnguard Axe, with a torch in the other hand. If you wish to forgo the kickass Kill-Cams of a mighty battleaxe, then go with one-handed.

I chose to not complete Ill Met by Moonlight, instead keeping the Cursed Ring of Hircine. It adds a bit of unpredictability, RNG goodness to the curse that is Lycanthropy. When in Beast Form, it is best used against single, powerful foes, such as giants, or Bandit/Reaver Chiefs, or multiple opponents, such as bands of Bandits, or, say, two or three Giants.

Conjure Familiars/Flaming Familiars, or place the spirits of fallen Venators into corpses to aid you in longer battles.

When fighting dragons, my strategy, before acquiring Dragonrend, was to use any cover I could find, such as the almighty, song of ice-and-fire proof Skyrim tree, activate Dragonskin for a chance to absorb any breath that got through the tree. Take the occasional pot shot with your crossbow, and when they land, switch to your trusty battleaxe, and charge in.

The key to survival with this build is to keep on moving. Do not stay in one place for too long. On difficulties higher than Adept, our fairly low health will go down quickly if you aren't careful.

Archery-Our only method of ranged damage, Exploding Bolts allow one to do AOE damage over time, and can help thin the ranks of your enemies, killing weaker ones, and lessening the health of strong foes, like Bandit Chiefs.

Light Armor-Even when unperked, this will allow us to take a few hits that our blocks can’t take, like being gank spanked from behind.

Sneak-Useful for kicking off combat with a bang, sneak also allows one to recon the area, provided they find a nice, preferably shadowy, vantage point.

Two-Handed-Our source of up close and personal damage, the extended reach of the Headsman’s Axe, plus bleeding damage, allows us to deal with foes that want to get up in your face-hole.

Enchanting-Used to boost your suvivability in the later levels, and on higher difficulties, as well as to rename items.

Alchemy-Concocting elixirs and poisons that you can apply to yourself and your foes can mean the difference between life and death.

Block-With relatively low health, and no perks taken in Light Armor, a well timed block, or dodge with Quick Reflexes can be useful in saving your bacon. 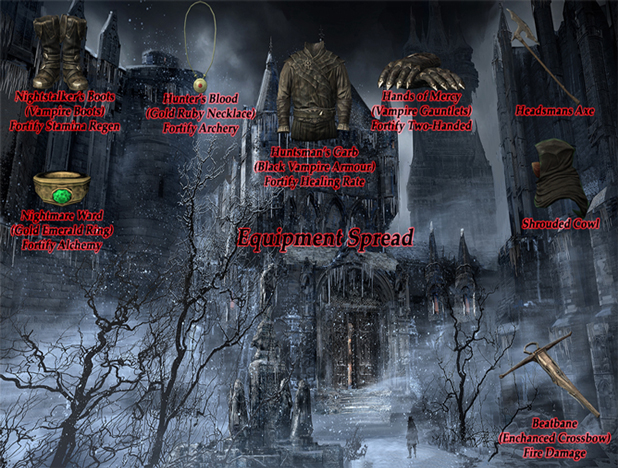 Sanguinem Malagma-Infusing a Venator’s altered  lifeblood with a regular healing potion has been known to boost its effectiveness. Restore+Fortify Health

Ferrum Philtrum-A strange concoction created by the Alessian Order, it is said to strengthen one’s body to that of iron, but also make the drinker as slow as a Nordic Barnacle  Fortify Light Armor+Damage Stamina Regen

Aspis’ Venenum-A deliciously painful extract of Alikr’ Viper venom, it both paralyzes the afflicted, and slowly rots their body from the inside out. Paralyze+Lingering Damage Health+Damage Health.

Subfossio Lubrico-A harsh smelling lubricant. It is said that when this vile oil is spread on a weapon, it shall cause an illness to befall the affected, causing all manner of heat or brethren poisons to deal increased harm to them. Weakness to Fire+Weakness to Poison 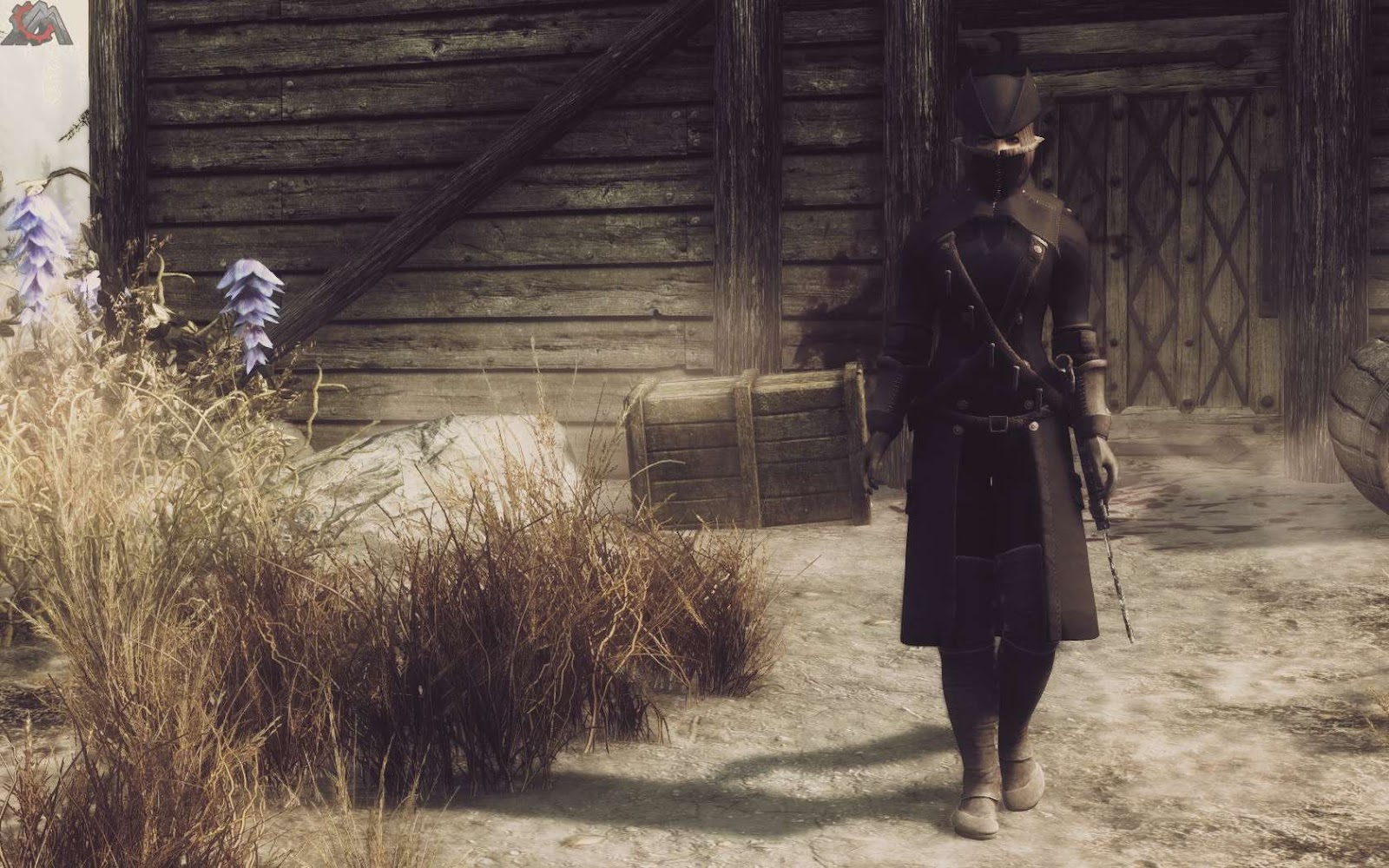 Finally, the inspiration came from FromSoftware’s awesome action-RPG, Bloodborne. Specifically, the player character of Bloodborne, known as The Hunter, or, The Good Hunter, as the Plain Doll calls you. Well my friends, with that, I leave you with the addage of Byrgenwerth....