Greetings and salutations my fellow Skyrimmers! Welcome to my entry to the Wizards and Warlocks Event! Do you like fire? Do you like detectives? Well, you’ve come to the right place. Welcome to a staff, spell, and occasional crossbow wielding wizard. Welcome to…. 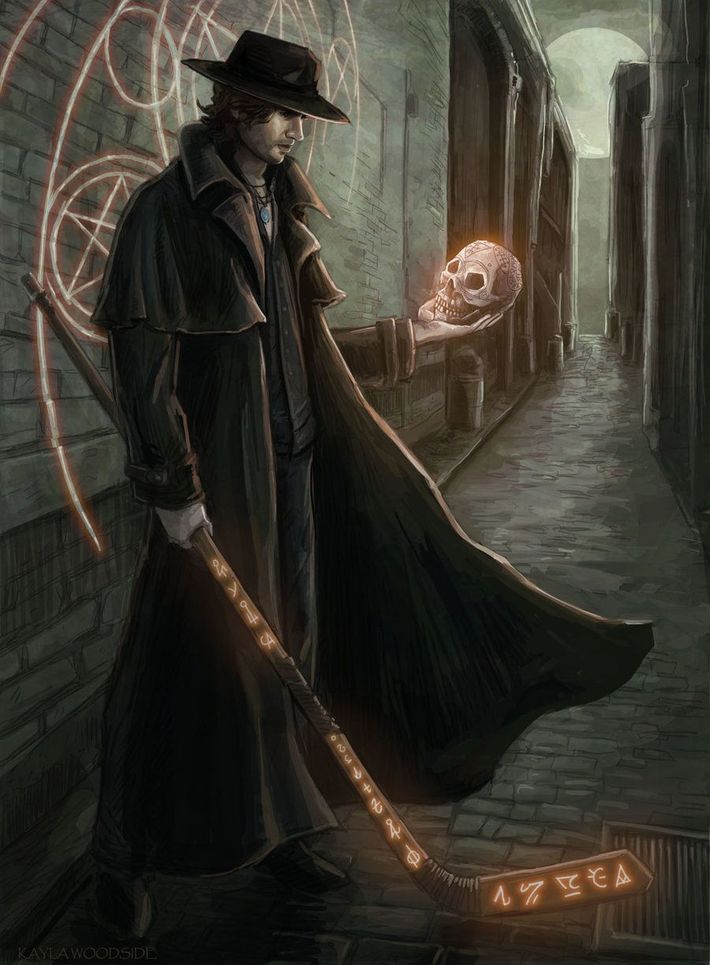 Helgen was on fire, and it wasn’t my fault…

Growing up, I never thought I’d end up becoming a private investigator of the more arcane variety, or end up in irons (again), albeit in this case it was due to presumed seperatist sympathies. After I left my bastard uncle and mentor afflicted with a severe case of death, I decided to do what most mages didn’t, helping their fellow Nirnian.

Well, it was while I was investigating the disappearance of some College of Winterhold dropout by the name of Ilas-Tei for her family, that my legendary bad luck reared its ugly head. Found myself in the midst of a skirmish between the kingslayer Ulfric Stormcloak, and some Imperial forces. I get slammed over the head, and captured. After nearly getting my head chopped off, I found myself in a flaming town again. That’s how my story began…..

Standing Stone: The Mage to start with for leveling up your magic skills, then we’ll cap it off with the Apprentice Stone, some of which its effects can be mitigated somewhat with the innate magic resistance, Dragonskin, and any found Resist Magic Potions. While I didn’t go around with it on 24/7, I did slot the Tower Stone into the Aetherial Crown, to have an extra spell in our book of cantrips, especially if we ever get accidently thrown in jail or somehow end up with very few lockpicks. 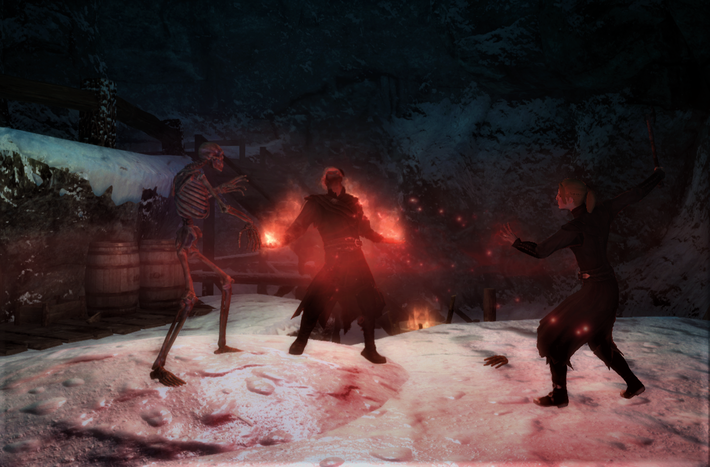 Gameplay as the Arcane Analyst was fun, yet simple. One thing that most mage builds I’ve seen rarely use is a Staff. Well, this character will make use of such a staff as their first means of attack, as well as a way to help level Enchanting via Soul Gems.

Combat will, if possible, start off with a stealthy Frenzy spell, or a poisoned Explosive Bolt, to help thin out the ranks, either killing off weaker enemies, such as say, normal Bandits and a Bandit Chief. I also took advantage of any traps. Take for instance Halted Stream Camp. In the chamber with the dead mammoth, and the Transmute spell, there are those oil pots and a big old pool of oil below. Simply shoot at one or two of them to ignite the pool, which has the benefit of killing the two lesser bandits, but also damaging the Bandit Chief.

Afterwards, combat will basically be a mixture of dodging arrows and spells, while also sending out as many as possible in return. Try and focus on weakening your opponents. For instance, Frost spells against warriors, fire spells against the undead, etc. If you ever run out of Magicka, or your staff runs out of charge, that’s what the crossbow is for. Even with its relatively slow reload time, the crossbow packs a bunch, and can even bypass 50% of armor, handy for foes such as thick scaled dragons and charging two-handers decked out in Heavy Armor. To help offset the slower reload than with a regular bow, summon either familiars or flaming familiars to temporarily draw aggro. One tip I found from reading the Aether Engineer by TZ ages ago was after firing a bolt round, if you quickly swap by a key binding to another item, then back, it allows a quick reload.

Mages can be mopped up by activating Dragonskin, having the Atronach, and the returning fire with staff and spell at enemy wizards, provided, though it’ll take a bit longer for Dunmer ones given our preference for flames. As for where you can get a Staff of Fireballs? Krosis and Vokun are both guaranteed to drop them.

Where this build really shines however, is faced against enemies weak to fire, particularly those pesky undead. Simply chug down a Fortify Destruction potion, by that I mean the premade Poton, Philter, Draught, etc ones, to boost your damage, activate Dragonskin to help absorb any Frost spells or Vampiric Drain, and begin roasting the undead like a Salamander.

Follower wise I stuck with my tried and trusted Faendel for awhile, then as soon as I could, swapped between Mjoll for her hard hitting tankiness, or Teldryn Sero, cause of his wonderfully sarcastic irreverence, and because he’s a great spellsword.

What I found especially fun to do when facing down multiple non-Mages was what I liked to call “The Pale Knight’s Mantle.” With Weakness to Magicka from the Apprentice Stone, simply use Secret of Arcana, chug any Fortify Restoration+Weakness to Magicka potions you may have whipped up (Longfin+Spadetail+White Cap), then use Blizzard, or a Scroll of Blizzard, to then launch a damaging whirlwind of ice and stamina damage to your surrounding foes, just make sure you don’t have a follower with you, or you have Follower’s Insight, just in case.

Most find me strange for keeping a collection of Falmer Ears and Daedra Hearts, I tell em to go piss up a rope. 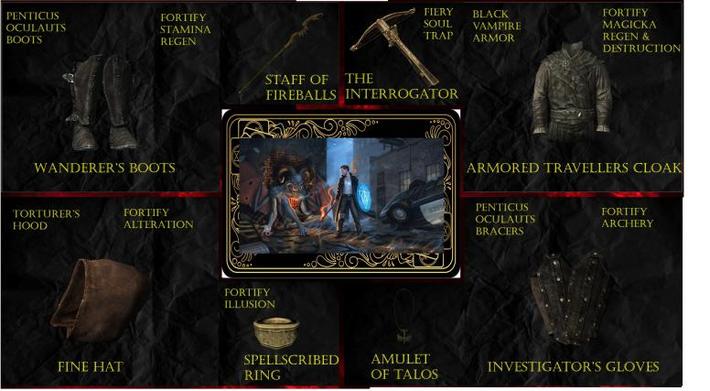 IIf you wish to play this build unarmored, then College Robes, the black Boots (like the kind worn by Necromancers), vampire gloves, and a Fine Hat were what I wore. A Staff of Fireballs can always be found on either Krosis or Vokun.

Main Quest: After managing to escape Helgen, you’ll want to investigate the sightings of dragons, and also warn the nearby Jarl. Wouldn’t want them to get caught with their pants down by a dragon, eh?

Dawnguard-This character really doesn’t like the undead, especially vampires, for personal reasons, so he’ll help out this motley crew of vampire hunters.

Dragonborn-After dealing with some pesky Cultists trying to ruin his morning, the Arcane Analyst will head off in search of this “Miraak” they were yammering about.

Laid to Rest-A jaunt over to Morthal uncovers what at first seems like lust-fueled arson, but soon turns to a darker conspiracy. Plus we get to help a little girl’s soul find rest in the hereafter.

College of Winterhold-While it may not do as much schooling as much as it does dungeon delving, the Arcane Analyst does enjoy studying magical phenomena, and the mysteries surrounding the College are too hard to pass up.

The Pale Lady-You get to pacify a rogue Wispmother. Don’t keep the sword, leave it on the pedestal. 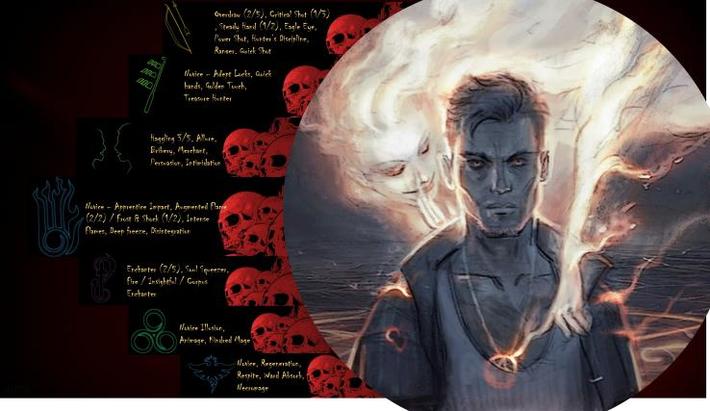 Archery-While not our primary ranged form of combat, the armor piercing of a good crossbow does help against well armored foes, or ones who may be resistant to magical attacks.

Lockpicking-While no master thief, the Arcane Analyst has had to bust open a few locks, and it helps especially when later training requires more valuable loot. Plus, more soul gems!

Speech-Good for persuading your way out of sticky situations, or to increase potential rewards. Especially useful for training once you have the Merchant perk.

Illusion-Primarily used to either thin out your enemies’ numbers, or to make a quick escape. Calm spells are so wonderful when you don’t wanna waste time with weaker enemies while dungeoneering.

Destruction-Your primary damage dealer outside your Staff. Fire will be our primary means of death dealing, especially against Vampires, though Frost and Shock have their uses.

Enchanting-It’ll keep you alive with nice passive buffs, and it’ll allow you to top up charges for your staff and for The Interrogator, your trusty crossbow, which helps level enchanting to boot. Plus, you can make and sell enchanted jewelry, weapons, and whatnot for training.

Restoration-Not a major skill, but useful to keep yourself and your follower or followers alive. Plus, Ward Absorb can be useful when tangoing with enemy mages. 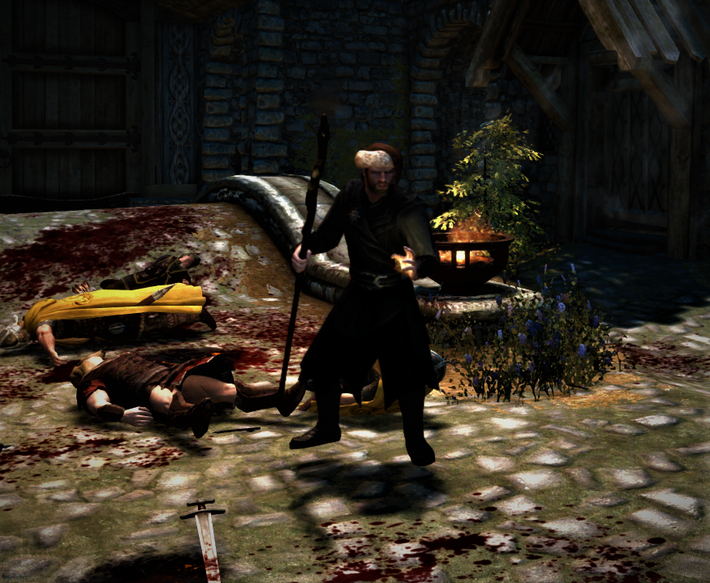 Surprisingly this brawl DIDN’T end with a building ablaze. 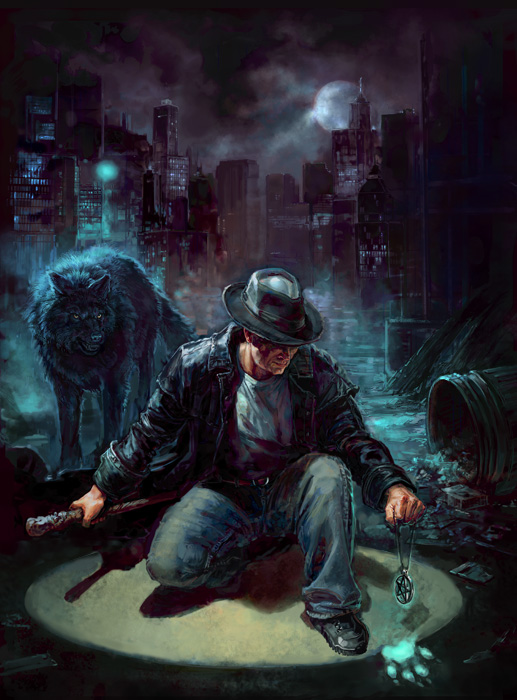 Whoo it is good to be back building, as long as it took to get out! Thanks to Warlocksg for the amazing spreads, and Furrion for the screenshots, you two rock. And if you haven’t guessed, I took inspiration from one Harry Copperfield Dresden for the character. Have fun if yah play the build!