Hey guys, welcome to Chris Dioknos' and my first Crossworld Event Build for 2019. We wanted to do something different, something that rarely has been done combined with some fun combat situations which always end with a bang. We are proud to present…

I never chose to live a life of crime, I was born into it. My pa was a crook, and after he died in jail, I, a poor boy from Riften, joined up with one of the local gangs, lead by a burly man by the name of Greta. In Riften, its easier to make your way in life by hook and crook. The whole damn city’s like this. Even the honest merchants gouge prices now and again.

But even still, as me and my boys lived on the run, I never forgot my roots. Never harm an unarmed maid, man, or child that don’t deserve it, and always give to the beggars. Poor bastards deserve at least a coin or two.

Then this damned Civil War started up. Things used to be simpler, just break into a house, rob some goods, then book it. While I was resting near Darkshade Pass, I came upon Ulfric Stormcloak and a band of his cronies passing by. I thought, “Molag’s Bals, if I kill or capture him, maybe the Jarls will pardon me.”

That’s how I got beaten by Imperials, bound, and loaded into a cart. Damn you Ulfric Stormcloak…. 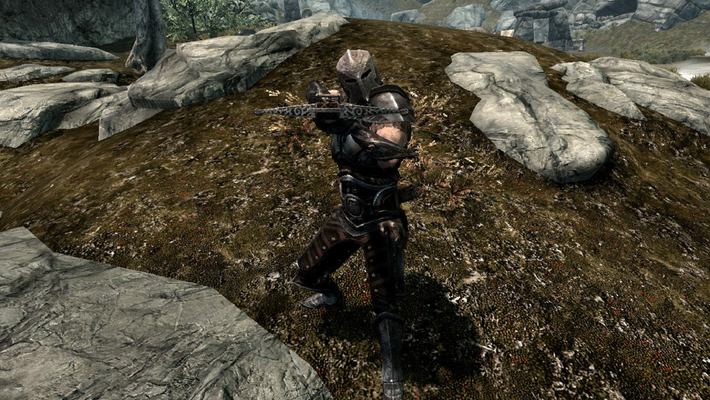 Race: Nord, I personally find Nord the best suiting for this build mainly for roleplay reasons, and Battlecry is always useful. Another race that works real well is Imperial.

Stone: Thief or Warrior for leveling, but switch to either the Atronach or the Lord, depending on your playstyle.

Stats: 1/2/1, depending on your playstyle, stop where it feels right. I stopped at 200 Magicka, and 200 Stamina, dropping everything else into Health.

Primary Skills: Heavy perked and used. Basically are the bread and butter of the build.

Heavy Armor: Really helps create a nice aesthetically of a bandit fighting guerilla style, while fairly boosting our AR (which we will be lacking).

Archery: Nothing like firing off Bolts, that literally explode upon impact. Purely for damage output and a few surprises that drastically change the game (Power Shot and Quick Shot).

Destruction: What goes *BOOM*, better the Runes and Exploding Bolts! They're basically landmines, perfect for a guerilla fighting style Bandit.

Secondary Skills: Frequently used, and perked but not as much as the Primary Skills.

Sneak: Doesn't hurt to have a slight edge and see exactly who and what you're up against. Also helps plan your Runes.

Smithing: Perfect for further boosting our lackluster AR while allowing us to create Exploding Bolts in LARGE masses.

Speech: You would think a Bandit, can smooth talk your everyday guard and get better prices, no?

Lockpicking: Nothing like cracking open a chest and being showered in gold and treasures There is a fair bit of fun during combat, as who doesn't enjoy things exploding? And the last thing your enemy is really going to expect is a bolt flying towards them, only to blow up in their face, or only to sit down and blow their pants/legs off. Literally. I found myself always switching depending on what I was up against, but it's fairly simple.

Archers, I found myself either taking them out straight away or disregarding them (they can both be small flies or a massive thorn in your side), don't bother wasting a Rune or an Exploding Bolt if you can. Not really worth it, in the end.

Up against Warriors or anything melee orientated. I say use Frost Runes, combined with Exploding Ice Bolts, really helps slow them down (until they change animations), AND it will chew through your targets Stamina, like a fat kid like candy, or a thief turned millionaire. Regardless if they are Nords/have a resistance to Frost (unless they're Undead or have a 100% resistance)

Mages. Best fun I have had in ages! Nothing like firing off bolts that stagger them every 2-3 shots. Chuck in some Shock Runes and Exploding Shock Bolts to really ruin their day.

Best thing about the Combat? I found myself literally keeping my ground after I was found and staggering my enemies with said Bolts every 2-3 shots really at times made things too easy. At times. 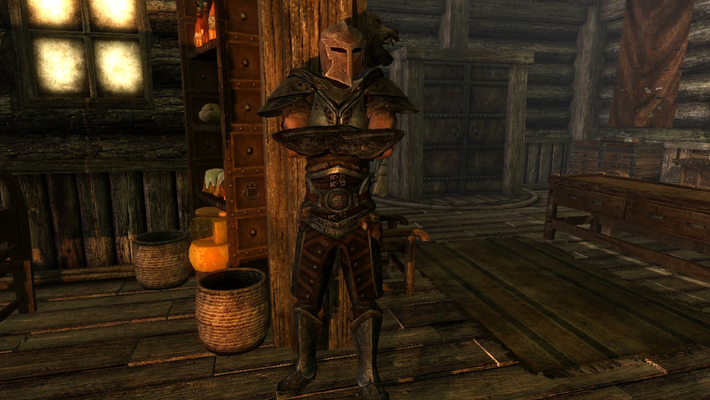 Ah, waiting for a client is always so tedious

Early on things are going to be fairly difficult. Not being able to use/obtain said Crossbow till at least Level 10, not being able to use more than one Rune at a time and no Exploding Bolts, which is quite sad. I simply found myself selling/stealing as much gold as possible only to throw it towards training Destruction, to at least level 25, for that precious Apprentice Destruction which really makes the difference from not casting a single Rune, to only casting one Rune per battle. Not much but hey, it's an improvement.

Outside of using Runes/Destruction and being stuck with a Bow (I was stuck with a Imperial/Hunting Bow till about Level 10, not the best start). Enemies getting to close/overwhelming you? I simply recommend either bashing (which is fairly effective even late game) or picking your fights.

For that reason, I stayed far away from anything that remotely had several Mages.

I really found Steel Armor to be both fitting for a (guerilla fighting style) Bandit AND it is really overlooked, (hell it's even better looking than Daedric Armor in my opinion). That and you can pretty much get it from Level 1 or craft it just as soon. A Dawnguard Full Helmet and Steel Plate Gauntlets/Boots really ties the aesthetics all together in my opinion, that and combined with an Enhanced Crossbow, where can you go wrong? Now this is where the fun begins. Hopefully you've completed the recommended Quests details in the next section (as the sooner the better, even focusing completely on them). Finally having the chance to finally use a Crossbow and normal Bolts. Then later (or sooner), unlocking its true potential, EXPLOSIVE BOLTS!

I keep talking about Explosive Bolts, and I have good reason to. It's something that I personally rarely have seen in a Build, that and come on. If you at least don't enjoy the odd/occasional explosion, something's up. That and combined with Runes (which from what I've found out, Exploding Bolts do NOT set off Runes), it is quite fun, it creates synergy or at least I believe it does.

Both myself and Chris had acted more so like your common Bandit. Mainly after jewels, gold and hitting it rich. But we both acted as if our character had a moral compass. I personally destroyed the Dark Brotherhood and refused to work with Maven Black Briar (between being accepted in the Thieves Guild and at the start of the Golden Glow Estate quest). As there are somethings that even some Bandits wouldn't do, regardless of how much gold is on the line.

Like I said I found myself destroying the Dark Brotherhood, as yes the gold is nice. But killing innocents in cold blood for some meager coin? Not only does it take the fun out of it, but it also didn't sit right with my character, along with the Thieves Guild. I found every way possible from stealing Frost to damaging Black Briar Meadery, anyway possible (sadly there is only the chance of stealing a keg/crate and taking it to Ivarstead).

Chris here, and I basically followed through with what Lee did. I played my character as, in following with the Robin Hood theme, loyal to the Emperor, but not exactly the Empire’s laws, so he’ll proudly wear an Amulet of Talos. Alongside this, I also handed a coin or two to the various beggars, even pickpocketing the occasional Septim or two onto their personage. Basically, thief wise, this character is a bit more in line with the Oblivion Thieves Guild variant.

We both believed our build was essentially an Aussie Outback Robin Hood. Fighting for what was right... on the occasion there was coin, it made it so much better.

Other quests that I haven't mentioned are:

Stones of Bazareniah: Really makes finding gems for Fire/Frost/Void Salts all that much easier, that and whatever I didn't use, I sold. I highly recommend completing ASAP (I finished it about Level 20-25ish) Tip, if you rapdily tap the pick up button, then theres a chance you can get more than one Stone per grab. Easier that trying to find each and every single Stone, no?

College of Winterhold: Opens up the Atronach Forge (I roleplayed following the handbook on the table and only willing to test/change the recipe for Salts)

Man Who Cried Wolf/Wolf Queen Awakened: I purely done this for the Stone, BUT I imagined the main reason (besides Potema coming back to life), Falk Firebeard wants to keep it quiet is a Bandit of all people defeating an ancient evil!

Chris here: I personally sided, optionally of course, with the Imperials. One, it allows the Empire as a whole a better chance of reforming, Two, the pay is probably better, and Three, if the Imperials win, then this character might be pardoned, and he can go back to his thieving ways.

Besides that, I found myself exploring. Hunting for treasure, hoarding my gold, gems and selling any (useless) artifacts that a common Bandit would throw away (such as a Staff of Chain Lightning).

Well, that was quite a lot of 'booming' experience, don't you say? I want to thank Chris Diokno, for doing a collab with me for Crossworlds and Pixel for hosting the Crossworlds Event for 2019. It's been the best fun, I've had for years. Oh and thank you for reading. If you've got any questions or comments, knock yourself out below (not literally), and don't forget to hit that 'like' button!