My experimentation with the spell tome equilibrium had always fascinated me. Coming across it during my first initial playthrough as a pure mage character and using it in some of my builds, I've always wanted to create a playthrough where I could use hemomancy in all its glory.

Wanting to re-create the effects of a pure spell-based Hemomancy found in other genres and media, such as World of Warcraft, Guild Wars 2, Dragon Age 2, League of Legends, Avatar: Legend of Aang/Korra and DnD Blood Magic Classes in RP, I had developed a playstyle based on the unique mechanics I had experienced, including:

Ladies and gentlemen, without any further ado, I present to you, The Hemomancer!

For the purpose of elaborating on this build, I have broken down the mechanics into 3 distinct categories:

We’ve been discussing a lot on Hemomancy, but what exactly is it? Hemomancy has often been shrouded in secrecy and is a very secluded practice of Magic. Indeed, it is this secrecy that has often proved to be both its strength and a weakness.

Hemomancy delves into a particular genre of magic, involving the usage of blood. On a superficial level, it involves weaving spells of non-elemental nature, usually shaped by the blood of the caster to absorb another’s life force and the manipulation of their own and/or other’s life force. This kind of magic augments the caster’s blood to be utilized as both fuel and weapon.

Regardless of the unique variations of its usage, the employment of such techniques achieves the following common effects: 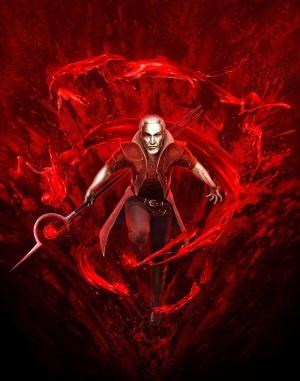 The build, at its very core, is a glitched build… there are no 2 ways about it. It needs to be glitched for the build to work. The difference with this build is, that the glitch introduced induces a new mechanic and way of playing altogether whilst not making it OP.

In order to play this build, it is important to understand the glitches used to constitute this build. Whilst the Power of Blood Magic in Skyrim is no doubt granted by Lord Molag Bal himself, the Hemomancer takes this to a whole new level by performing these rituals, tapping into the vampire lord power granted by the daedric lord to form his core arsenal.

The following rituals allow you to obtain the “Vampiric Drain” AOE Missile and Mist Form vampire lord abilities found in human form, used in both the offense and defense strategies highlighted in the combat section below

It's important to know that every kill with this “blood bolt” ability still counts as a feed and contributes to your Vampire Lord skill tree, which can be perked to augment the spell and obtain the mist form perk. These 2 abilities form the basis of this build.

The rituals below allow you to gain the power of the Hemomancer whenever and wherever so you desire… do note that it may take more than 1 try to perfect this: 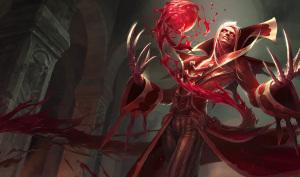 Note: Killing someone with the Drain Life spell still counts towards your Vampire Lord's perk tree experience. This can be used to access the perk tree in Vampire Lord Form to take mist form perk. Note: Though mapped to the shout button, it consumes Magicka, resulting in no cooldowns in human form! 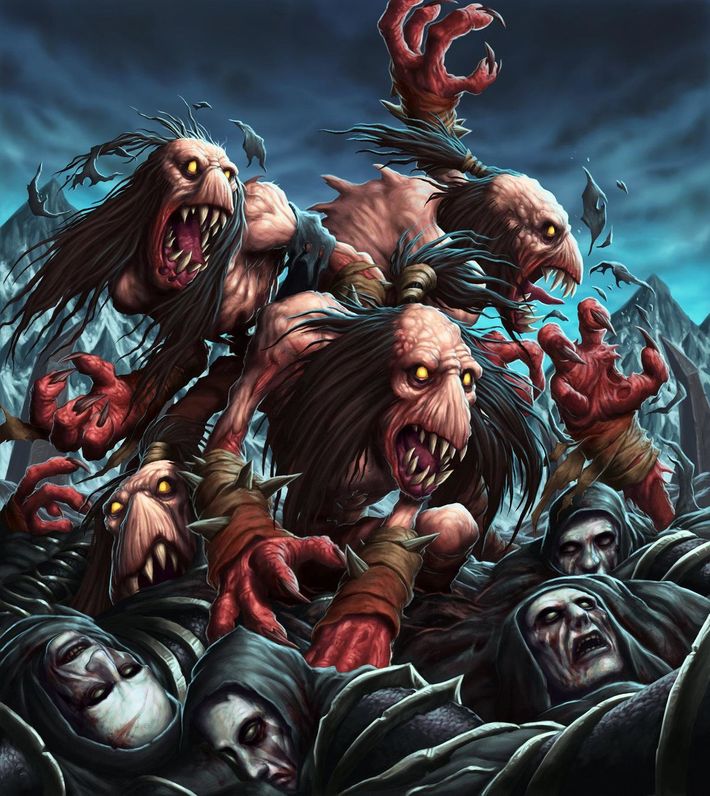 Do note that the intended outcome of this Ritual is not achieving an overpowering health regen like Histskin, but rather supplement out of combat health regen after an encounter when using blood siphon (since magicka does not regenerate at all) or perhaps even to a small extent, help cover the health deficit during encounters (in between siphoning and attacking). 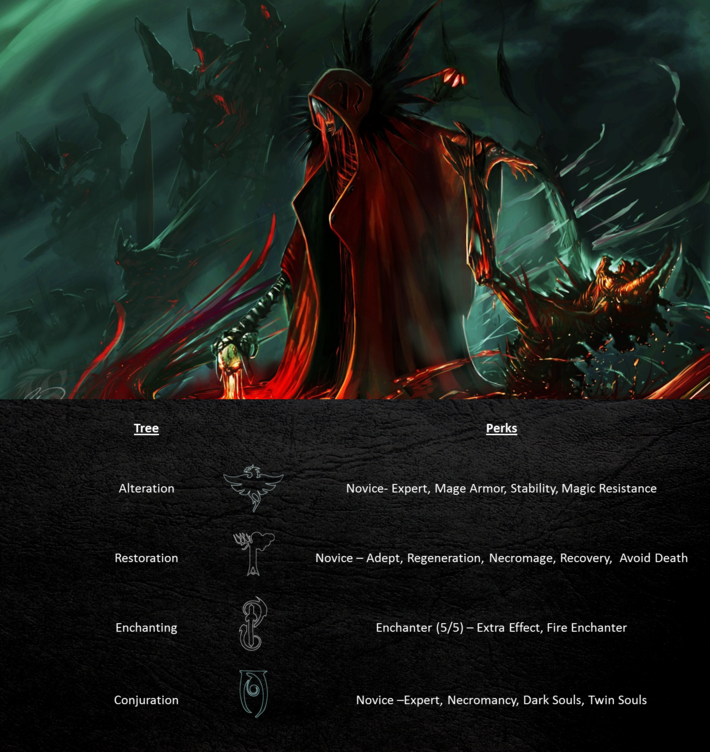 Enabling Blood Magic and Protection, this will be your primary tree for Chaotic Domination

Restoration: With Necromage providing a much-needed boost to spells, Poison Rune is a well-welcomed addition, functioning as the only DOT for this build.

Speech: Mostly for Roleplay to reflect the fear that a Hemomancer commands. Do note that I haven't indicated this in the perk spread, as it is purely optional Unlike my no crafting builds, enchanting forms the main crafting mechanic of this build, with a heavy emphasis on spell cost reduction and increased health.
This single crafting skill, however, paves way for an unexpected secondary utilization of the Alchemy crafting skill.

A surprising unique side effect of enchanting, and one that I have covered in my Battlemage Sellsword Build.

By utilizing a bug with the penticus oculatus helmet, a 5 slot total value of 125% magnitude will be applied to all potions and poisons, essentially ensuring that any potions created, will be of the same effect as perking up the alchemy tree for 5/5 alchemist and 1/1 benefactor and/or Poisoner. This allows for a minor glitch/exploit to be capitalized.

Since enchants on clothing gain a boost when equipped, a single fortify restoration potion crafted from the enchanted fortify alchemy gear, can be used before equipping your main gear, providing a boost to the stats on the gear and in turn, poisons/potions created.

This trick can be further implemented when seeking the blessings of the standing stones, to increase the magnitude of the blessings.
This is the hidden and unique application of the craft, enchanting.

The gear chosen for this build, though simple provides the perfect synergy for roleplay and aesthetics. The copper trimmings of the reddish-brown version of the fine clothes set, sync beautifully with the copper ruby circlet and gloves. 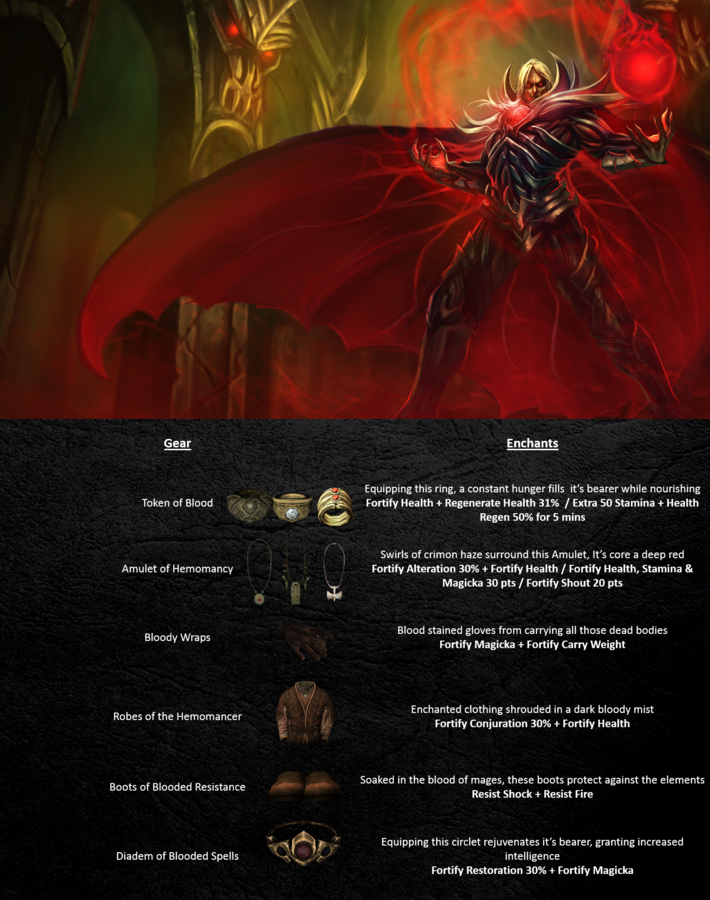 This also adds to the roleplay of a person of noble ranking, who prefers to live in alone. With no Magicka regeneration enchants, this build truly forces reliance on the blood magic mechanism to maintain spell casting efficiency. 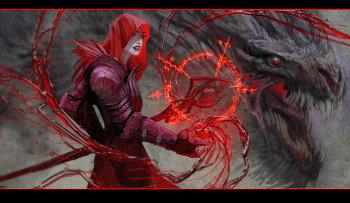 Here are the stats to go along with when playing this build:

Roleplay wise, always keep in mind that though you started out as a mage, your chosen path is one that directly opposes Magicka. Reckless though it may seem, sacrificing your health for magicka is the only way you know. Though not completely evil, you are neither good, only committing to tasks that bring in additional power either magic wise or politically.

In Addition, the following can help with the immersion of the gameplay and character: 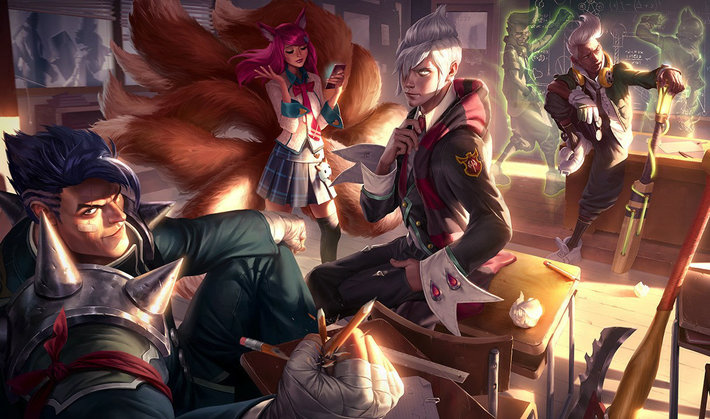 The combat structure of this build is based on my inspiration of blood magic and the “Cross class combo” mechanics of Dragon Age 2. In DA2, the type of class your party with leads to some unique effects when encountering enemies. 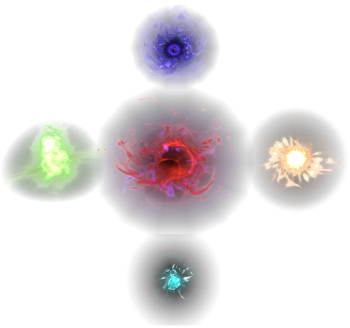 Unfortunately, in Skyrim, there is no such thing. The next best thing I could come up with was to have a “cross effect combo”. I will be covering more details about this in the gameplay section later.

Tides of Blood - Your vampiric drain is augmented, siphoning life and dealing damage to all blooded being in an area

Blood Siphon – Bleed yourself and draw Magicka from your blood

Hemo Plague – Waves of dark energy wrecks havoc on the blood of your foes.

Blood Offering – You offer your life force up to vicious, spectral demons who attack your foes

Blood Control – Tug on an enemy's blood from within, causing paralysis while taking damage.

Blood of the Ancients buff + Vampiric Drain + Tides of Blood

Life Bane incantation - The words flow mellifluously from your lips, but the dark magic that comes with them culls all energies

This combat set up for this build boasts unique mechanics and tactics. One of the finer aspects of the gameplay involves what I term the “Cross Spell Combo”.
So what is a cross spell combo?:

We all know that Frost Spells Drain Stamina and Damage health, whilst Lightning spells Drain Magicka and Damage Health. Conjuration summons with these 2 effects and enchanting a followers weapon to do Fire damage, in addition to the blood damage dealt by this build provides the optimal damage output and draining of resource against all 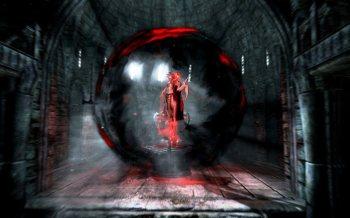 possible foes. This is the effect of a Cross spell Combo.

Needless to say, the Cross Spell Combo also determines the approach to combat for this build. The lightning damage from Arniel’s Shade makes a surprisingly good tank, generating massive amounts of threat and invulnerability from magical or physical damage due to his corporeal form. The drawback though is that he must be cast ahead, smack in the face of the enemies.

The conjure mistman spell allows for the summoning an undead frost mage, combining ice spikes with frostbite spells, albeit a more powerful version. It’s AI ensures ranged behavior, placing you in mid-range for getting those Hemo Plague spells off.

Followers (I personally use Lydia), will either adopt spell or bow for ranges behavior. With Arniel’s shade tanking, bows enchanted with fire damage or spells of nature fire will make up the finality of this cross spell combo.

Should the fight prolong or be there one too many mobs, the follower should have the capacity to function as an “off-tank” of sorts and yet take the damage not only from enemies but also from the AOE damage of your spells without getting aggressive. It is important to enchant the armor of your follower with resist magic, Fortify heavy armor, Fortify health and Stamina to achieve this end, else you risk killing him/her.

As you can see, the gameplay, though a simple set up, this build is a finely crafted and detailed strategy which would reply on its blood damage and the cross spell combo as it’s the centerpiece.

Here are the videos showcasing the various rituals used to achieve this build and a short gameplay clip showcasing the offensive powers of the hemomancer.

In finishing, I’d like to dedicate this build to the members of this blog.
It is my hope that this build will give you a splendid playtrhrough of fun, as you use it to explore the various other quests in Skyrim or it’s multiple mods (Falskaar, lufthaaren anyone?).

I look forward to making more unique builds, amidst the various responsibilities I have in real life.