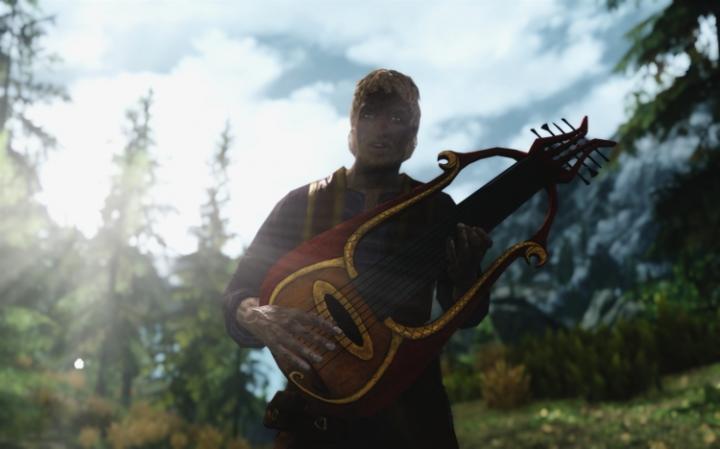 "Dragons have returned to Skyrim. Only the Dragonborn can destroy Alduin and prevent the end of the world. So why would the gods bestow such a gift upon one who can lift neither sword nor spell against his enemies?"

The Bard grinned knowingly. "It's true, I am unable to swing a sword in my defense. Yet there are others who would gladly follow me in pursuit of glory. The pluck of my strings will inspire them more than a battle cry. My Voice is a more powerful weapon than any blade. All I care for is a wondrous story. In the end, does it matter by whose hand the wyrm is slain?" 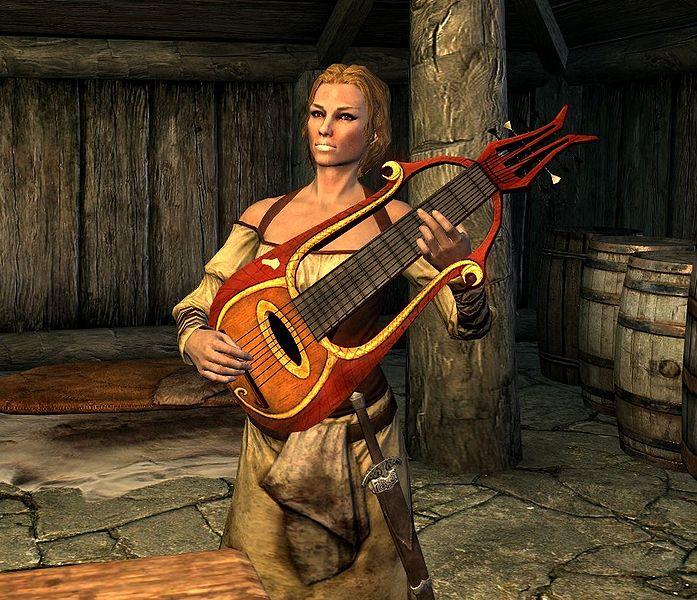 Race: Any, though humans make up the majority of bards. Imperials and Nords can turn the tides of a great battle with their Racial Powers. Personally, I went with Breton to provide coverage from enemy mages.

Stone: Thief or Mage Stone, then anything you desire. Atronach can make Bretons invulnerable against dragon breath, or Lord can boost your survivability slightly.

This character is slightly modeled after the stereotypical bard, providing support to the party via their instrument, boosting their morale and healing small wounds, as well as demoralizing their enemies.

Since the Bard has no offensive skills besides a dagger, you are dependent entirely upon your follower to do your dirty work for you. You are a traveling bard, following adventurers on their journeys, looking for inspiration to create the next great story, poem, or song. You may be the Dragonborn, but you aren't the hero type; you write ABOUT heroes. Bards are masters of Speech and Sneak; you can learn so much in the courts of nobility, where tongues flow freely when only a lowly Bard is present.

In battle, use illusions and appropriate shouts with vigor. As far as I'm concerned, this bard is not actually wielding spells, but is playing and singing to mimic spell effects. Open with a poisoned backstab, then fall back behind your adventurer, buff them as much as you can, and heal them when necessary. If the tides turn against you, shift your tune and scare off a few enemies, or calm the beasts of the wild. If you're feeling daring, jump in with your dagger and kite an enemy or two, to give your hero time to recover ground.

It's easy to do just about any kind of RP with this build, especially when it comes to your heroes. Since technically they are the hero, you might decide to do quests based on their personality or skill set. Let J'Zargo become the new Archmage of Winterhold. Help Serana destroy the remnants of her abusive family. Help Lydia become the new Harbinger of the Companions. Beyond that, what kind of Bard are you? Are you content to observe things as they happen, calming people if tensions get high, or do you goad enemies into such a rage that they kill each other? The possibilities are endless.

And, if you have a PC, there are numerous mods that can enhance your experience even further. To name a few: "Playable Flute, Lute and Drum" "Ebony Lute" "The Bard's Quest" "The Poetic Edda" "Amazing Follower Tweaks"

Since your followers will be the hero of the story, you'll be spending a lot of time with them. Here are some of the best followers I used, and in what situations. Also remember, with the Dragonborn expansion, followers now level with you, though many still have level caps. The specifics of how you imagine your hero to act is up to you, but do your best to match their personality to their playstyle. Uthgerd the Unbroken probably isn't going to be sneaking around, and Eola isn't going to charge into a group of bandits.

Sven (Max 20) is a fellow bard in Riverwood. Help him woo Camila and you can help him warn the Jarl of the impending dragon attack, and eventually become Thane of Whiterun. He only has minor perks in Archery, 1Hand, and 2Hand, and his low level cap makes him less than useful after the first few quests.

Uthgerd the Unbroken (Max 30) is a drunkard in The Bannered Mare in Whiterun. Her personal backstory makes her a perfect candidate for become the new Harbinger of the Companions. She's a perfect warrior build, with perks in 1Hand, Archery, Heavy Armor, and Block. (Unofficial Skyrim Patch will change 1Hand to 2Hand)

J'Zargo (No Max) is an apprentice at the College of Winterhold. One of two Khajiit followers in the game, J'Zargo is very ambitious. His decent spread of spells and natural inclination to greatness makes it easy to help him become the new Arch-Mage of the College. Alternatively, he makes a great Blades recruit, due to his strong Destruction skill and infinite level cap.

Eola (Max 30) is a twisted cannibal follower of Namira. This Breton Nightblade will follow you after you finish the quest "A Taste For Death," and her personality and skillset - Destruction, Sneak, Alteration, and 1Hand - make her perfect to become the new Listener of the Dark Brotherhood.

Jenassa (Max 40) is a hireling found in The Hunted Huntsman in Whiterun. One of the few followers that dual-wield, Jenassa makes for a great adventurer, but her personality suggests she may do well as a new Guild Master/Nightingale in the Thieves' Guild. Archery, Light Armor, Block, and 1Hand are her major skills.

Serana (Max 50) is a female vampire from the Dawnguard questline. She has an obvious personal vendetta against her father, and it only makes sense you would help her end his reign of tyranny over Castle Volkihar and Skyrim.

Celann (No Max) is a good alternative hero for those who side with the Dawnguard, if you don't like or trust Serana. Heavy Armor, 1Hand, Archery, and Block make him a decent tank, and his infinite level makes him helpful throughout the game. Conquer and decimate the vampire scourge.


Frea (No Max) is another obvious choice as a follower through the Dragonborn questline. She dual-wields and is an offensive powerhouse, and her alteration spells make her even more durable. Help her free Solstheim and her people from the threat of Miraak. 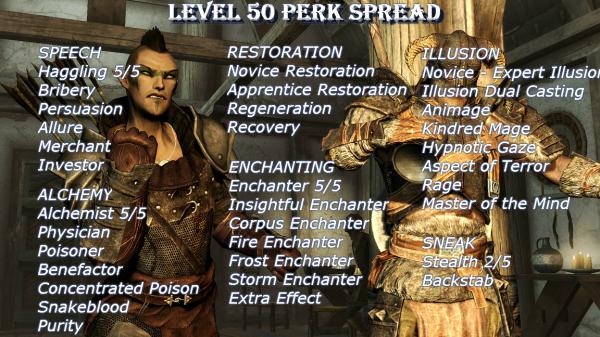 Speech is a Roleplay skill, but the cornerstone of the Bard character. Their silver tongue can get them out of all kinds of sticky situations, even if Skyrim doesn't have too many Speech checks. And more money never hurts; having an expensive home next to the Bards' College after writing your epic tale should be your goal.

Illusion is the skill you will be using the most, emulating the effects of your instrument. Frenzy or calm your enemies, and buff your own teammates. Remember that the effects of the beneficial spells stack up! It's up to you to decide whether you could mask your presence with your instrument (via Muffle and Invisibility) but DON'T get quiet casting; a silent instrument can't do a thing.

Restoration is a super minor skill also emulating instrument effects. You should pretty much only be using Healing and Healing Hands, but Turning Undead can be a lifesaver, especially at earlier levels when you delve into ruins.

Enchanting is used to enchant your hero's armour and weapons more than it is for your own. Just remember that Fortify Skills and Schools do not affect your followers.

Alchemy is used to craft poisons and potions (big shock), but don't forget to share with your hero. Paralysing poisons and Fortify Illusion potions are some of the more useful ones.

Sneak is barely used at all, but can be useful in barrows and other dungeons to help sneak up on sleeping or unaware enemies and give your hero a bit of an edge with a well-applied poison and backstab.