I’ve always enjoyed the amazing characters for Skyrim that have been created over the years. They have brought me a great deal of entertainment and inspiration. So much so that I finally decided to sit down and jot down my own character creation. What it lacks in finesse it makes up for in enthusiasm. With that in mind, I present to you... Warduke.

There are names so fearsome that they are spoken of only in whispers. Then there are names so fearsome that they should be chanted during an arena rock concert. Warduke is just such a name. You can practically hear the crowd scream “WARDUKE!” as stage pyrotechnics erupt and electric guitars wail. When starting a new character in Skyrim there are times when you want to play an intricate, cleverly crafted character like many of the other entries on this page. Other times you just want to smash things as a big guy who looks like he should be airbrushed in a Frank Frazetta style on the side of a customized van. If you’re going to go that route you might as well go all the way and play as Warduke.

But who is Warduke? While his exact origins are murky, he first rose to fame as an action figure in 1983 as part of the Advanced Dungeons & Dragons toy line. His tagline there was “evil fighter” and, to be perfectly honest, he hasn’t been fleshed out much more since. In the 1980’s the D&D adventure modules The Shady Dragon Inn and Quest for the Heartstone included Warduke as a pre-built character. In the brief bio included it is noted that Warduke and fellow toy Strongheart used to be friends. However, when Warduke was exposed to the power of the Heartstone his cruel nature came to the forefront and he became the evil warrior he is today.   Later on, his backstory was changed so that he now was a fearsome, mysterious warrior who came out of the Greyhawk Wars and served the Unnamable Hierarch. Whatever pieces of lore you feel like honoring there are a few important things to remember when playing as Warduke: you’re huge, you’re not the nicest person in town, and you’re dressed inappropriately for the climate of Skyrim. 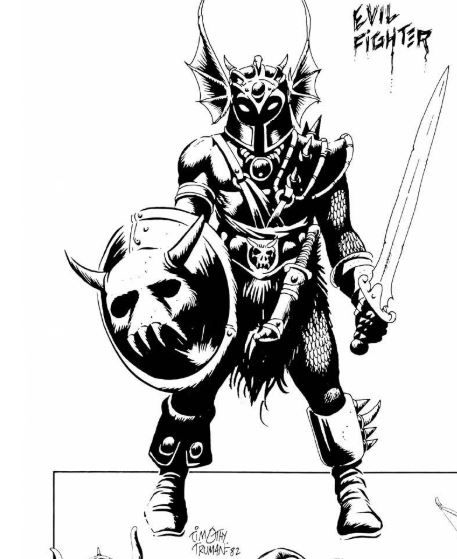 Race: I went with Breton but any human will do. Who knows the true identity of the man behind the helm!

Stone: Steed. While heavy armor pieces are needed to recreate Warduke’s unique look he shouldn’t move like he’s loaded down head to toe in steel.

Equipment: Daedric helmet, Falmer armor, Stalhrim gauntlets, Ebony boots. This is the closest I could come to Warduke’s singular look without mods. The most important thing here is that no two pieces should be from the same style. Warduke isn’t interested in any potential matching set bonuses.

Stats: Just enough magicka to summon a perked bound bow and then 3H/1S. That big of a stamina pool combined with the Steed stone means that Warduke will have cardio for days.

Skills: One-handed, smithing, heavy armor with minor investments in archery, enchantment, and destruction/conjuration. Sorry, that’s very basic, but this is a straightforward build that’s all about hitting really hard.

Weapons: In keeping with his flair for dramatic names, Warduke refers to his sword as “Nightwind.” It’s a magic sword, but there’s some question as to what sort of enchantment it has. In his D&D stats it’s listed as some type of fire spell. However, it has also been shown as having a nifty ice enchantment. For my build I split the difference and went with a Chaos enchantment. A Stalhrim sword powered up with this magic and backed by destruction augmentation means that Warduke will have a sword arm that will be feared throughout the land. When I said this build was about hitting really hard, I wasn’t kidding. I considered using fire/frost/thunder enchantment perks as an alternate method of pumping up Nightwind’s power but the destruction perks were quicker to unlock. If you want you can use both to boost the chaos damage to absurd degrees and make everything extra dead but that seems like overkill, even for Warduke.

One accessory that Warduke is never without is a dagger so I made sure to bring along a Stalhrim dagger equipped with Soul Trap. It’s good for sticking the occasional wolf and charging soul gems. Nightwind chews through its charge very quickly so Warduke will always be on the lookout for more mystical batteries. Until you unlock Soul Stealer for your bound bow this is going to be especially useful so you aren’t giving all your money to merchants just to refill your sword. Although I never invested any perks in it, I also used the dagger for duel wielding occasionally just for the sake of variety. Some artists have shown Warduke holding his sword in his right hand when, in fact, he is left-handed, so to fit in with my head-canon I’m assuming he is either ambidextrous or switches his sword around occasionally as some sort of training regimen.

For a shield I went with Spellbreaker. During a recent quest Warduke relieved a group of young adventurers of their magical equipment. Most of the items were bartered away to pay for his passage to Skyrim but a shield that can block both s 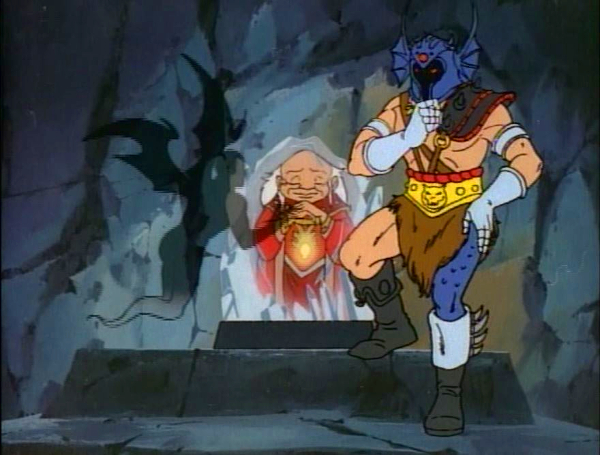 pell and sword and a bow that generates its own arrows were prizes worth keeping. This tongue-in-cheek bit of backstory also gives Warduke an excuse to eventually master the bound bow.

Shouts: Dismay. In his stats it is noted that Warduke has Fiendish Eyes, meaning that he can see in the dark, has spooky red eyes, and, most importantly, has a fear gaze attack that has the chance to cause anyone who dares to look him in the eye to be frozen in fear. The Dismay shout fits this power perfectly. No-name bandits go running when they realize who they are up against. Even strong opponents who may not be fully affected will still crumple for a second when hit with the full power of this shout. This gives Warduke plenty of time to get in a good swing or two with Nightwind, which is all he needs.

Another little bit of trivia: One of the gems on Warduke’s helmet stores spells so he usually keeps it stocked with a word of recall spell. Warduke has a lore friendly reason for fast travel in Skyrim!

Mandatory Quests: The Only Cure, A New Source of Stalhrim, March of the Dead, with a detour through Mzinchaleft to get your Falmer armor.

Skyrim is funny in that the large latitude of player freedom creates a situation where it’s difficult to be completely evil or completely good. Foul necromancers who have undead minions shambling behind them are still welcomed by the local merchants. Also, even the most noble of heroes might accidentally massacre a Forsworn village or two on their quest to defeat Alduin. When playing as Warduke you can put those concerns about extremes to the side. Instead, embrace the idea that for a majority of your playthrough you’re a self-serving jerk who stabs people and sells their worldly possessions for money. You’re slightly feral and that’s just fine.

During my playthrough I played up my neutral-evil lifestyle by being utterly mercenary in my interactions with others. For example, I toadied up to Skald the Elder as much as could, to the point where he attended Warduke’s wedding to the Duchess of War. After that, I joined the Empire in the Civil War and sold Skald out without a second thought. Good times!

In order to keep in the spirit of the character, don’t cast spells to level up your destruction and conjuration. Instead rely on trainers and any book learnin’ you can pick up in your journeys. A warrior should strive to improve his martial training through study and practice, not dabbling in unrelated skills. This means you’re going to be putting a lot of money into Warduke’s secondary education but that’s the life of a sell sword.

When Warduke felt like giving his feet a rest he rode Nightmare, an evil horse(!) with flaming hooves and glowing red eyes. Shadowmere would be the perfect substitute. This means Warduke will have to bumble his way through several jobs for the Assassins Guild that he isn’t particularly suited for but, as I noted before, nobody said being an evil fighter was going to be an easy job.

In keeping with his role as an adolescent male power fantasy, Warduke had a surprising number of women in orbit about him in his original bio:

In my playthrough I didn’t do anything to replicate the powerful emotions Warduke brings out in female clerics. But if you can figure out how to recreate what sounds like a melodramatic love triangle within the game of Skyrim go for it, I’m certain it would be quite the journey. However, to recreate Warduke’s partnership with Skylla I used Illia. If you squint really hard their names almost look alike. Plus, Illia’s trigger-happy use of destruction magic also makes a fine counterpart to Warduke’s sword and board approach. Between the two of them there is little that they can’t hack up or blow up. Actually, for someone dubbed “evil” Warduke seems quite congenial with the idea of working with a party of adventurers. Feel free to switch around your followers when the mood strikes. The only recommendation I have is to make certain your followers are dressed in more sedate armor. Warduke should be the wildest looking person in Skyrim.

Summary: The game Skyrim is endlessly entertaining because it allows players to build their own stories. If you want to nobly stand up to danger or be a sneaky backstabber any method is valid. Your character is your own and allows you to play whatever role you like. The game even allows you to take on the persona of an old action figure, if you so choose. 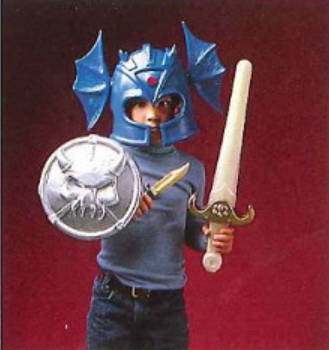 This build is recommended for ages 5 and up. Batteries not included. Some assembly required.

Credits: Photos are copyright of their respective authors. Thanks to: A Brief History of Warduke Dux Bellorum D&D Wiki and Power Score for their information about Warduke’s exploits. Finally, thanks to Timothy Truman for creating Warduke’s design.