So--after waiting almost seven years, someone finally did it, they made the mod I have prayed for. 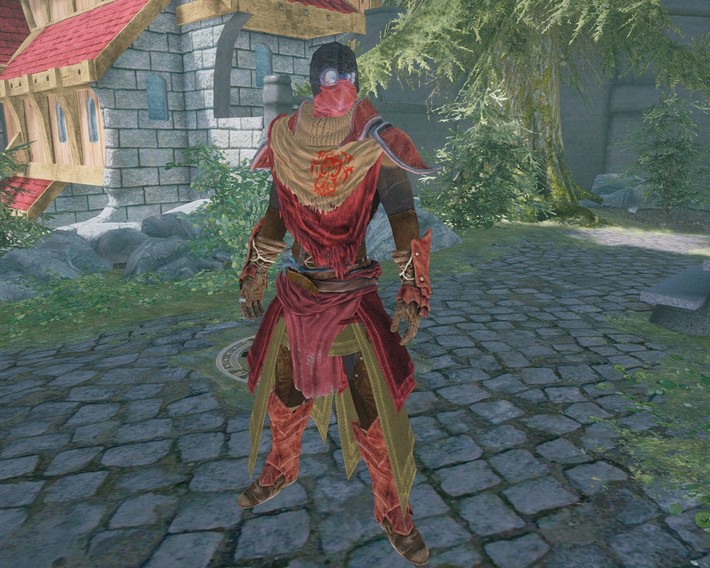 I have always wanted to make a Morag Tong build; the concept armor they did for Morrowind was f***ing amazing. And then, in all the games, the armor was trash. But now I have my gear and I raise the Ebony Blade in the Webspinner's name.

So - the build will be called The Vounouran. We've learned in ESO, maybe somewhere else, that when a Tong agent retires, due to old age (or because  of the 'curse of fame' from a big job), he or she retires to the Isle of Vounoura. Naryu Virian's papa Mjahlar is one example.

The backstory will involve this legendary retired Tong assassin being recalled to Skyrim because of...something, to do...something. I'll work on that. No shortage of lore options--avenge the oppressed dunmer in Windhelm, weaken/strengthen the Empire, destroy the Brotherhood, use the Brotherhood to destroy the Empire...it's a lot. My guy will venerate Mephala, but I'm not sure if it will be her that calls him to Skyrim, or someone/something else.

A key roleplay mechanic will be public kills instead of sneak kills. (I am pretty sure that I will "convert the DB over to the Tong philosophy" via roleplay, rather than destroy it--its really the only organized thing in the game that will give me kill contracts.) Tong agents killed in public and turned themselves in with their honorable writs. This guy won't have writs, but he has Tong honor and just rejects the idea of skulking around like a common street rat. As such I'll dispense with the dagger and stick to the dai-katana for a more dignified brand of murder.

In terms of gameplay, my idea here is that he is old, so it will be built around the limitation of low stamina. Physical combat will have to account for that, when he doesn't use illusion to avoid combat. Archery, but primarily to deliver poison damage. Twohander, but primarily to deliver absorb health damage with Ebony Blade. The Ebony Blade, augmented with Marked for Death and weakness to magic poisons, is a perfect fit for a guy who fights with skill, experience and mysticism but not with raw power. (Credit to Oneness and his Emissary of Darkness build)

Race Dunmer. Probably--doesn't have to be, the Tong had members of all races in Morrowind. But dunmer are the master race so there's that.

Stone (Andromeda) Shadow or Serpent. Possibly both if i use the Aetherial Crown. (Vanilla) - I guess I'd just do Lord.

Skills Major Alchemy, Illusion, Light Armor; Minor: Sneak, Archery, 2h. I will likely do the build in Ordinator. Question to community, do you think nonstandard skills would be better? I debated other skills but honestly I feel like these are the skills of a veteran Tamrielic assassin. I already have the quirk of 2h instead of 1h/dagger; going further out of the mold just doesn't make a lot of roleplay sense.

Gear This sick armor, the unenchanted Chitin Bow from this mod and the Chitin arrows from this mod, and the Ebony Blade. I did some testing with this loadout and I got no testing done because I kept stopping to admire how great this dude looked. Other item is (maybe) Aetherial Crown; ring and necklace TBD.

Spells There are a lot of cool Apocalypse illusion spells, but I think I will stick to vanilla calm/fear/frenzy and showcase Ordinator's illusion tree. (Again, if I use Ordinator). It adds a ton of new dimensions to those standard spells.

Wait what are the special abilities I'm not telling

You don't have any special abilities yet, do you Shut up, n'wah

I have a lot of stuff swirling in my head about quests, roleplay, etc but I'll stop there. So I'd love any suggestions or feedback, on anything and everything. Praise be to the Spinner -