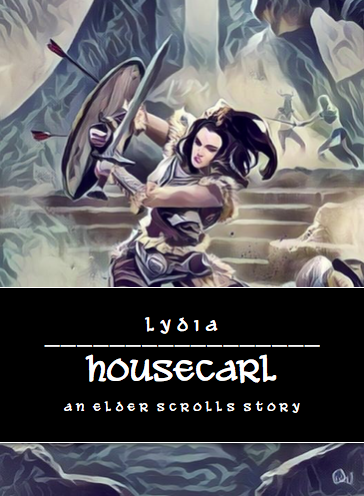 Hello all. This is my first ever post here in the story corner. This is going to be a series of chapters that all collectively make up a short-ish novel that I have been working on for some time. At the onset of this project, I wanted to find some of the more popular and interesting characters in Skyrim that had little actual backstory or real character in the game (a description which plenty of NPCs in Skyrim fit) and give them backstories. Eventually this evolved into a full book which ties into an adaptation of Skyrim's main story and Civil War, as well as plans for other questlines in the future.

The first story in what I plan to be a series focuses on Lydia, whom we all know as the first Housecarl assigned to the Dragonborn upon become Thane of Whiterun. While she is a popular follower, she has little real character or story, so I've given her my own spin with this story. Here's the official summary:

"Skyrim and the whole of the Tamrielic Empire is in chaos. Skyrim is locked into a new civil conflict, and Lydia is thrown right into the middle of it. Ever since their parents were murdered in a bandit raid on Falkreath, Lydia and her sister Reydi swore themselves to become warriors; defenders of Skyrim. But when Lydia joins forces with the Jarl of Whiterun, and Reydi is jailed for a misunderstanding, Lydia discovers forces at work that are much more powerful than any Bandit. A darkness is sweeping through Skyrim."

Not much else to say here apart from please read and enjoy it, and give me as much feedback on my writing and the overall story as possible. Thanks for checking it out :D