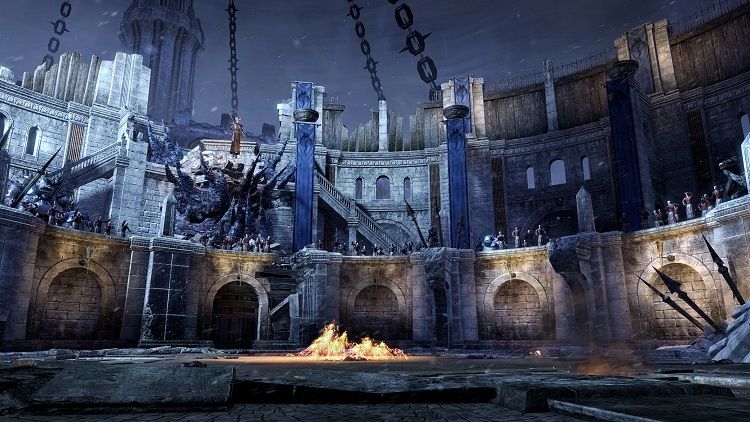 This is the full backstory for my Lion of Bangkorai build. Enjoy !

The sun had reached its zenith above the arena. Through the heavy iron portcullis, Kazan was staring, unflinching, at the opposite side of the field ; behind the other metal gate across the sand coliseum was his greatest adversary to date : Do’Sharr, the Grand Champion. Even for a Pahmar-raht, Do’Sharr was of remarkable size and strength ; growing up an orphan in the streets of Corinthe, he had been taken in at a young age, and trained in martial arts by Khajiit monks. Unsurprisingly, Do’Sharr had made a name for himself early on in his career, fighting exclusively with his claws. For that reason, the people of the Imperial City called him the Anequinan Skinner.

Kazan was ready for a fight with the colossus. He had spent the night before, as was customary for many a gladiator before a match, in one of the Arena District’s finest pleasure houses. If they could meet their end the next day, thought the pit fighters, there was nothing wrong in spending their very last hours on Nirn feeling the touch of a woman for just one more time. As he walked past the velvet drape that served as a door to a private salon, reserved to arena fighters, he noticed Do’Sharr was here already, a superb Bosmer on his knees. Kazan and Do’Sharr, in truth, had never really spoken more than a few words to one another. At times, they had practiced together, and they would greet each other with a nod should their paths cross in the underground corridors of the arena Bloodworks, but that was all there was to their relationship. Without saying a word, Kazan sat on the same side as the giant Khajiit, at a respectable distance. The two of them remained quiet and still for a few minutes.

“You know”, said Do’Sharr in his deep, yet oddly soothing voice, abruptly breaking the silence, “Do’Sharr respects you a lot as a fighter.”

-“Feeling’s mutual, Do’Sharr. Regardless of what happens, this’ll be a good fight.”

Do’Sharr promptly shooed the wench away with a jerk of the head, and got up to sit across the room, facing Kazan. “Do’Sharr likes this Bosmer. It’s his favorite here.”. He grinned, revealing an impressively sharp rack of fangs. “This one has made a bet with the brothel owner, you see. If he wins tomorrow, he gets to eat the Bosmer. Alive.”

-“Didn’t know you cats to be cannibals”, said Kazan. He was not surprised, though, that such a gigantic beast could be one, as he would probably be able to devour the elf in a matter of seconds.

-“We aren’t”, pursued the Khajiit. “For the most part. But this one reveres the Great Night, you see. The Guardian of the Dead.”

-“Yes, our legends say Namii-ra is the mother of the Dro-m’Athra, the cursed clan of the Lost Cats.”, explained Do’Sharr, “This one thinks he will start with the girl’s ears. Or maybe her toes. Both are crunchy appetizers.”

-“Ah, Kazan of Bangkorai, my fellow child of the sands”, giggled the Khajiit, “if such is the price to pay for Do’Sharr to enjoy a good meal, then this one feels sorry for you.”

Strange fumes were coming up from the hot sand that had been fully cleaned up for the fight to come. Kazan’s grip tightened on the hilt of his weapon ; he could feel the earth quaking beneath his feet, the leather strips of his heavy harness sticking to his skin ; all of his senses seemed heightened at the prospect of the battle to come.

“Good people of the Imperial City !” bellowed the announcer, covering the constant hubbub rising from the bleachers, “Welcome to the Arena !”

The crowd was clamoring in excitement as the rusty spikes lowered underground, letting Kazan and Do’Sharr rush at each other. Quickly, the Khajiit got in range to pounce ; he met only Kazan’s shield, raised above his head to cushion the impact. Kazan struggled to maintain his footing, as the beast crashed upon him, and barely shirked the next blow. He thrusted at Do’Sharr with all his strength, but the cat, albeit massive, was nimble ; he swiftly dodged the Redguard’s attack, leaping backwards. Kazan yet again charged in, shield arm forward, his sword pointed at the Grand Champion.

Dusk was approaching. Do’Sharr and Kazan were still fighting, relentlessly ; the match seemed to be a stalemate between two gladiators of equal caliber. It was a beauty to see. The strikes were precise, the parries were swift and efficient. Kazan’s footwork, despite his heavy garb, had remained impeccable ; in what must have been an instant both combatants had taken to catch their breaths, Do’Sharr snarled at his rival “We have fought long enough, sand dancer ! Let us finish this, for blood and glory !”.

The Redguard cried out in fierceness, as he bolstered himself, praying for Leki to guide his arm, and launched his final attempt at an assault. The Khajiit let out a terrifying roar, getting down on all fours, sprinting straight at Kazan. The whole arena acclaimed as the two warriors clashed for one last time…

“Citizens of the Empire !” yelled the announcer above the thundering sound of the crowd’s applause, gathering whatever strength his voice still had left, “We have a winner !”

Kazan’s eyes were barely able to see, clouded in sweat, blood and sand. He felt like he was about to faint, as he presented the Khajiit’s head to an ecstatic audience, rising it high towards the setting sun. The announcer’s voice echoed once more through the walls of the arena : “Behold, my friends, the new Grand Champion of the Arena ! All hail our victor, all hail the Lion of Bangkorai !”

Kazan had stayed garrisoned in Cheydinhal, after General Jonna’s troops had made the city their foothold ; it had nearly been half a year since he and his regiment had been ordered to hold their position, while the remainder of Jonna’s forces marched south, to the Imperial City. To what would be known as the Battle of the Red Ring. Kazan was wondering if he’d ever go back to the Imperial City ; if the Arena would ever be rebuilt. His glory days were short-lived, unfortunately : he hadn’t been Grand Champion but about four months, that the Great War began. All able-bodied men were progressively taken into the Legion’s ranks, and he had to resort to leaving the Arena behind. He and his men were waiting ; a messenger should arrive shortly from the capital. “If that treaty is signed” said Kazan to the soldiers that had gathered around him, “I don’t know about you lads, but I’m going back to Hammerfell to drive these pointy-eared bastards out of my forefathers’ land !”. The Nords under his command answered with uproaring warcries. None could imagine surrendering to the Dominion. None among those who had fought, bled and watched their brethren die for it, could conceive ratifying the death of the Empire.

Kazan woke up in the middle of the night and quickly began packing up. In his dreams, he had felt the great presence of the Hoonding, reaching out to him. At long last, it was time for him to start fighting once more.

After the White-Gold Concordat was ratified, Kazan and his men had defected from the Legion ; for many weeks they had ridden East, towards the unforgiving sands of the Alik’r desert. They eventually reached his home city of Bangkorai, and fiercely waged war against the elves for five more years, until the Dominion’s withdrawal from Hammerfell. The land of his ancestors had been freed, but none of the men who had followed Kazan were alive to tell the tale ; he had stopped fighting from this day on, twenty-one years ago.

Yet, on this very night, the fateful spirit of the Path Carving God himself was showing him the way. He would be heading North. Within a few weeks, he would reach Falkreath. From there, he would make way for his people once again.  Under the pale light of Masser and Secunda, Kazan set foot upon the road, and pressed on.