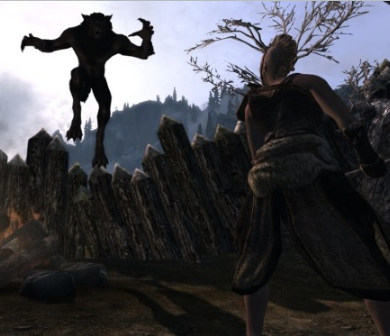 Hey guys, we're back again with another Character Build Showcase! In the spirit of our current Skyrim Character Build Contest we have a featured build that truly demonstrates the potential and synergy of werewolf form. This week's featured build is The Shaper by Ponty. As always I'd like to start out with an excerpt from the author themselves to give an idea of what this build is all about.

The Shaper is a powerful magicka user, able to cast a wide variety of spells, as well as take on a fearsome beast form. In humanoid form, he is able to shape the energies of fire, frost and lightning to destroy his foes in all manner of grisly deaths, and summon a full variety of daedra from Oblivion to assist him. He can also mould the minds of others to his will to take control of any situation, and even heal the wounds of himself and others. A powerful mage for sure - but that's not all. When the situation calls for it, the Shaper can transition into a terrifying werewolf form, making him tougher and stronger, wreaking havoc across an already-chaotic battlefield.

A chief complaint of werewolf builds, and vampire lord builds for that matter, is the feeling of having one's own abilities and powers pushed aside in favor of those offered by their monstrous transformation. But such is not the case with the Shaper, a build that combines the terrifying versatility of a master wizard with the equally terrifyng brutality of a werewolf.

Ponty's use of werewolf form is simple yet brilliant. As powerful as a mage can be they are still hampered by a multitude of weaknesses - archers, aggressive melee fighters, or simply exhausting their supply of magicka to name a few. The werewolf form exists not to override and replace the mage but rather cover his weaknesses by being everything the mage cannot be in human form. The end result is a mage who has an answer for every situation imaginable.