Decades after the Dragon Crisis- after Miraak’s Cult was vanquished, after the Civil War was ended, after the Eye of Magnus shut and the Dovahkiin himself fell to an unknown assassin’s dagger- Skyrim exists in a facade of peace. Talos is once more a worthy Divine, Nords are their own kings, and the Thalmor Elves are losing their grip on Tamriel’s mainland. Below the surface however, things are much worse than they appear.

Someone is desperately searching for the ancient Dragon Priest masks, but their motives are just as skewed as their identity. The Order of the Lamp has made it their priority to collect the artifacts first, learn their purpose and ties to the ancient ruin of Labyrinthian, and safely seal them away for good. Finding a dozen masks hidden across Tamriel is no easy feat, however; The Order needs all the help they can get. They’ve sent a call across the province for any willing and able adventurer, warrior, or treasure hunter to meet them in the crumbling city, and their pleas have not been ignored.

Welcome to “The Dragon’s Dozen” 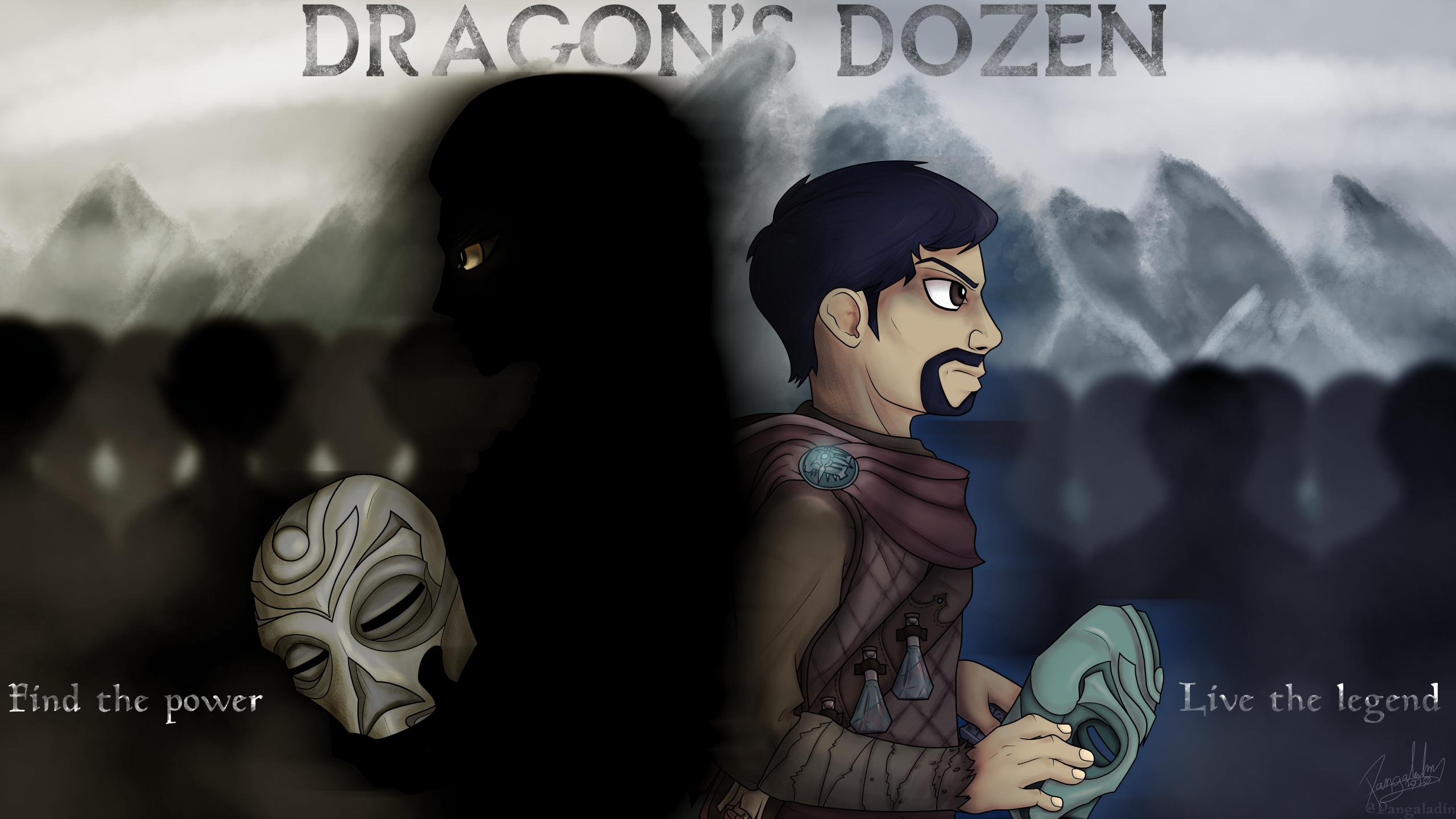 With a number of our community members interested in following “The Dragon’s Dozen” campaign on our R&R Discord server, we’ve decided to make a blog to keep everyone up to date on new characters and plot updates as they develop! There are a lot of replies to sort through in any given channel, so for those that miss a few days- or just want to passively follow the storyline- this blog will give you the opportunity to catch up. Of course, summaries are rarely as great as the actual story; feel free to join our server here to read along or join in the campaign yourself!

If you have any questions about our campaign, want to know more about our characters, or would like to give us your theories or opinions, feel free to comment below!

Hope to see you around Lamp Camp!

(People, places, and factions have been taken from Ponty’s “The Lamp Descendant” and Kendrix’s “Daughter of Dominion”.)

In an unlikely turn of events, the leader of the Order of the Lamp, Blaise Lamont, and a traveling mercenary, Zenoya, find themselves teaming up to solve the murder of a group of scholars in Hjaalmarch. Their searches lead them to a dangerous bandit camp, a shifty broker, and an incredibly powerful warlock. With nothing more to go on than a set of books and a sneaking suspicion there may be more answers in Markarth, Zenoya begins her search for answers in the City of Stone while Blaise uses his extensive network of contacts abroad.

The Lamp Knight’s sources point him in the direction of orcish battlemages living in north-west High Rock. Before he is able to act on his discovery, however, his Elven companion returns to the Hall to reveal to him a critical piece of the puzzle: a Dragon Priest Mask. Convinced they are onto a much bigger plot than either of them could imagine, they enlist the help of a cocky, arrogant scholar, Favnir Silver-Tongue. The Nord suggests he might have the answers, but his research will take time and require all the masks to complete. Upon Blaise’s request, the Order of the Lamp and their honorary new ally focus their attention on the ancient ruins of Labyrinthian. They’ve reached out to the entire province, asking for anyone looking for fame and fortune to join them there in search of the Dragon’s Dozen. 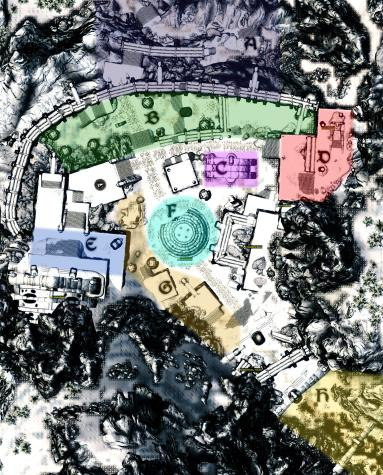 (A) Hjaalmarch Approach: The northern approach from Hjaalmarch into Labyrinthian has been repaired and fortified, and the walls patrolled by warriors from the Morthal garrison. Thanks to the steep climb, most supplies are coming into the camp from the Whiterun approach (H).

(B) Adventurer's Encampment: The small stone huts left behind by the ancient Nords mingle here with campfires, tents and other shelters of all shapes and sizes, housing the adventurers from across Skyrim and beyond who have answered the call of the Lamp Knights.

(C) Makeshift Shrine: This largely-intact structure provides a quiet and separated spot for prayer and meditation. Several of the camp's residents have set up shrines to the Divines here.

(D) Craftsman's Workshops: Craftsmen hired for construction & repair works along with those who have arrived to take advantage of the concentration of adventurers in the camp have set up their workshops on the terraces at the eastern end of the ruined city.

(E) Order Enclave: A half-dozen pavilion tents erected on the terraces leading up to the infamous Labyrinthian entrance mark the enclave of the Order of the Lamp, where the Lamp Knights are residing, managing the camp and making their plans.

(F) The Sanctuary: Rumoured to be a sacred meeting place of the ancient Dragon Priests, it is here that the scholars working with the Order have set up their laboratory. Guarded by all times by the Lamp Knights, none bar their own and the scholars are permitted entry.

(G) Merchant's Run: The series of ancient huts, towers and platforms here have provided the ideal place for the merchants, hunters and cooks supplying the camp to set up shop. A pair of Bandaari traders have set up shop at the northern end, supplying not only magical goods but tavern fare from across Skyrim.

(H) Whiterun Approach: The road south leads into Whiterun hold, where wagons laden with fresh food any other supplies are a common sight.

(These are both in-game and fan made characters that have been adapted to fit the campaign. They are directed by one of the GMs unless otherwise specified.)

Blaise Lamont: A Breton in his early thirties, Blaise Lamont is the current Steward of the Order of the Lamp. Well-groomed, wearing practical but refined attire and an intricate silver sword, Blaise projects an aura of calm confidence.

Zenoya: Altmer mercenary Zenoya is a fierce spell-word whose allegiance lies strongly with the Order of the Lamp. Wearing old Aldmeri golds as armor, her thick Nordic accent and “hit first, ask questions later” attitude seem like a sharp contradiction to what is seen on the surface. Regardless of others perceptions of her, Zenoya is willing to go to the ends of Nirn to keep her allies safe and go even further for those she calls her friends.

Cylena: A young Bosmer and initiate of the Order of the Lamp, Cylena left her home of Valenwood to study magic away from the judgements of her "betters" in the Aldmeri Dominion. Recruited by the Order after a brief time as an Apprentice in the College of Winterhold, her keen eye for both arrows and the arcane make her a good candidate to become a Lamp Knight. Clad in fine leathers and a heavy scarf, she is a common sight around Lamp Camp, standing guard and running errands for the Steward.

Teldryn Sero: Former mercenary and self-proclaimed "greatest swordsman in all Morrowind", Teldryn Sero has been working with the Order of the Lamp for almost thirty years. Now in his third century, this chitin-clad Dunmer's blade has begun to slow, but his wits and spells are as sharp as ever.

Dulmoth: Another one of the Lamp Knights' new initiates, Dulmoth found the Order after being cast out from his clan for using magic during a duel. Despite this Orc's unquestionable combat prowess with his one-handed warhammer, he is still learning to properly command the potential of his magical abilities, as evident from a litany of scars from various mishaps. While not on active duty, this mail-clad warrior is never far from Lamp Camp's tavern.

(These characters are original and are owned by their respective creators. For more information about these characters, feel free to join the Discord and look over the Character Sheets!)

Lord Saxton, the Flayed One (Lazy): Veteran and Victim of the Imperial Legion, Saxton is a man of few words and violent actions. Failed attempts at healing a horrible skin disease have left him marred and bleeding constantly, but he’s battle prowess and intimidating stature are testament enough that the Breton is not to be trifled with. 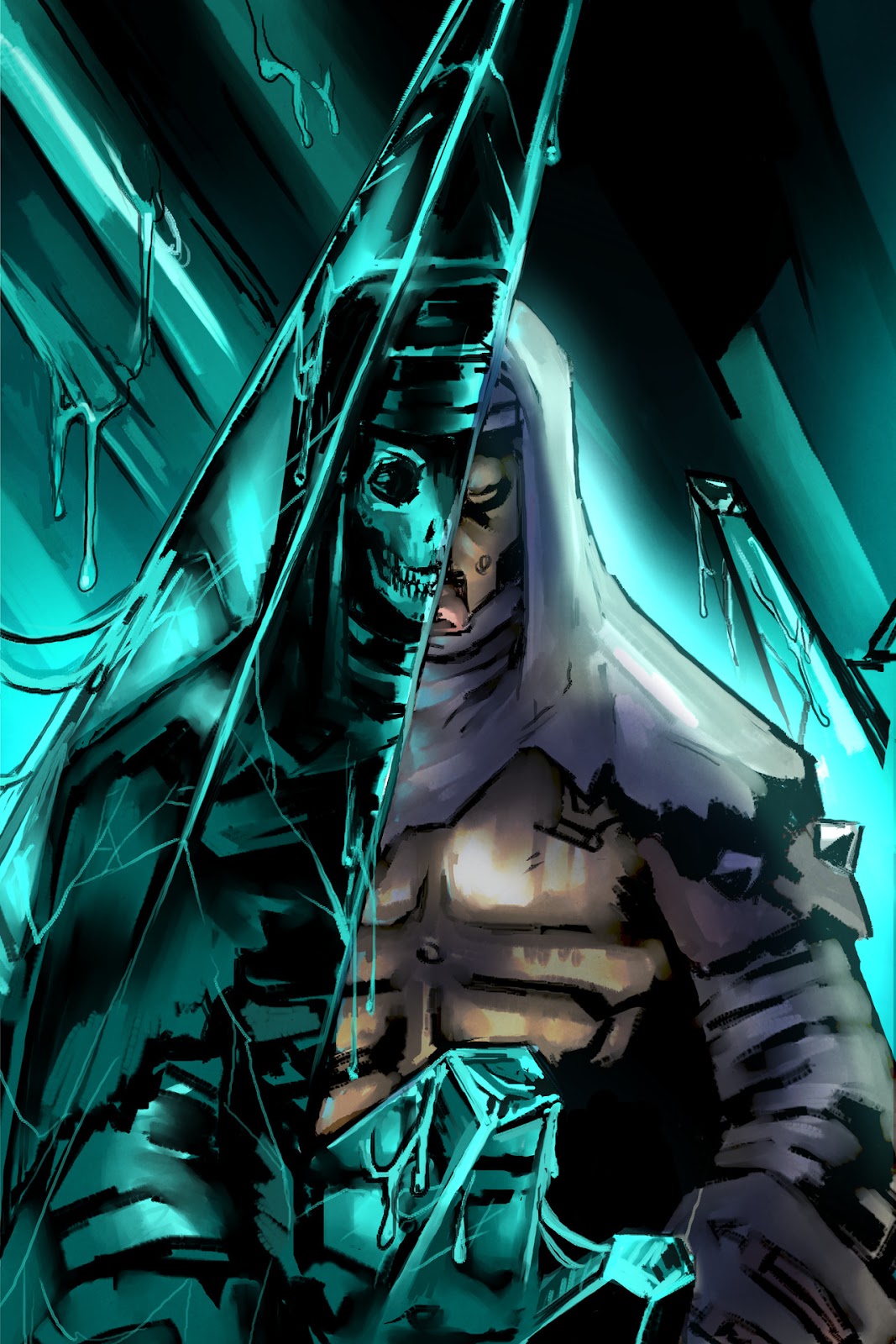 Aurelius Everlund (Erinoth): Quiet and respected Aurelius Everlund is always busy, either with odd jobs for those who can pay his fees or in scholarly pursuits and ventures. Easily mistaken as a gentle giant, the heavy-armor clad Imperial naturally falls into leadership roles, but when things go south, he’s often the first to take the blame. 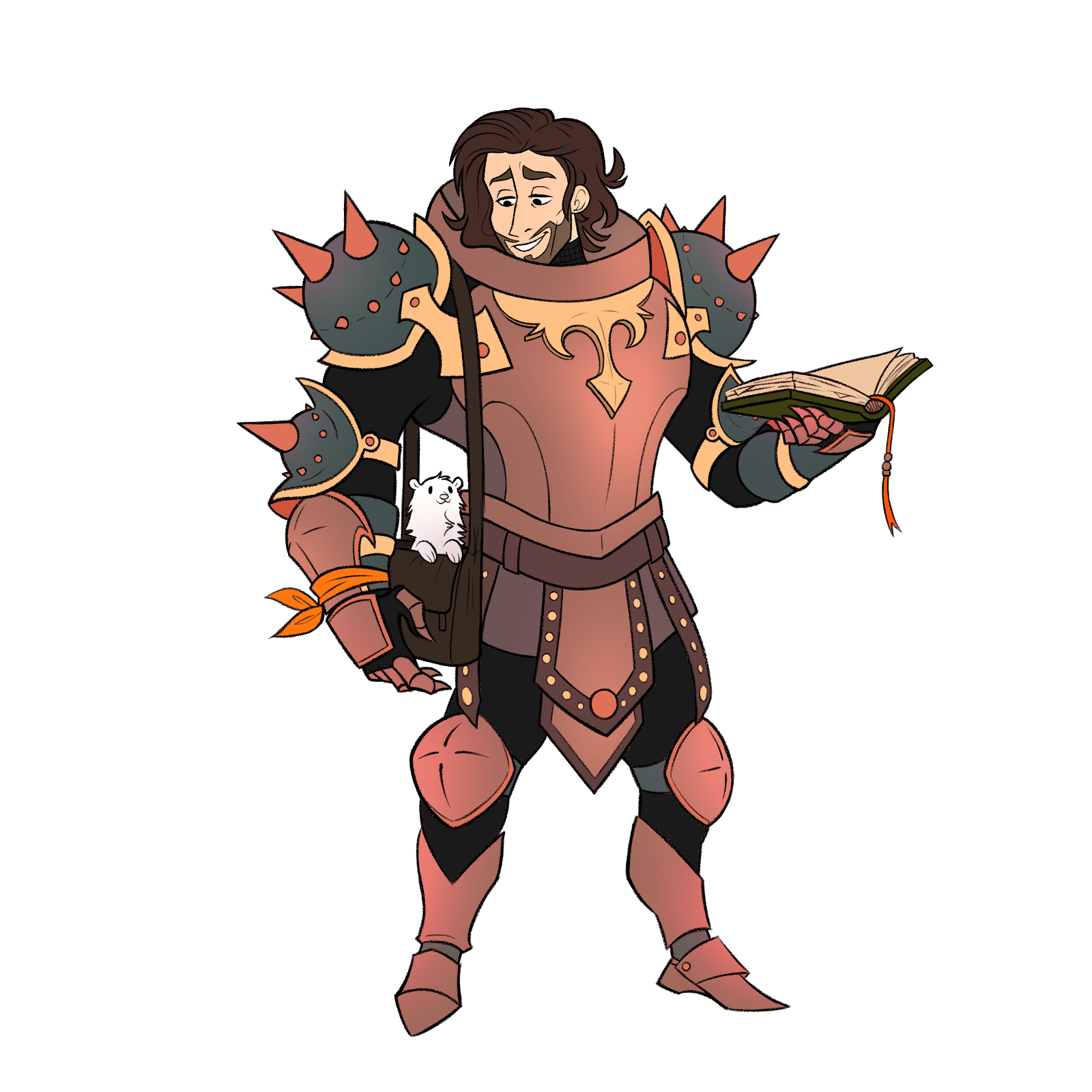 Drel, Priest of Arkay (Telby): In an odd turn of events, Dunmer Vampire Drel finds himself as a Priest of Arkay- but much more out of necessity than religious convictions. With blood from the recently deceased, corpses ready for necromantic practices, and weak-minded priests that are easy to sway, he feels right at home in the catacombs of the Halls of the Dead. In his isolation however, the lonely elf has been left feeling unfulfilled, and he desires more. 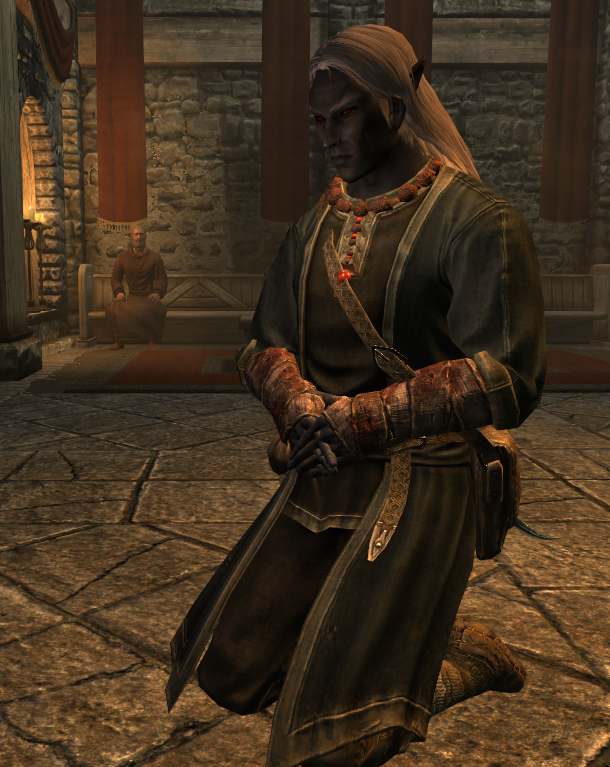 Hallbu Dragonstar (Henson): Skilled with spell and sword, Maran Knight Hallbu uses his gifts to fight evil wherever it shows its head in hopes of bringing balance across all of Tamriel. The middle-aged Redguard viciously safeguards life and is willing to go beyond rules, laws, or customs to preserve it, should the need arise. 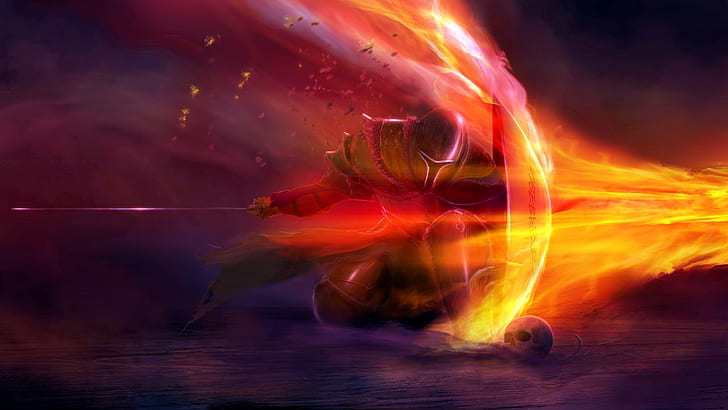 Arivena Korzras (Rogue): One of the last remaining Snow Elves, “Sethana” tries to blend into society by claiming a Dunmeri heritage and namesake. Young, naive, but talented with both magic and might, the woman searches for new friends and adventures beyond the Sanctuary of the Hidden Vale. 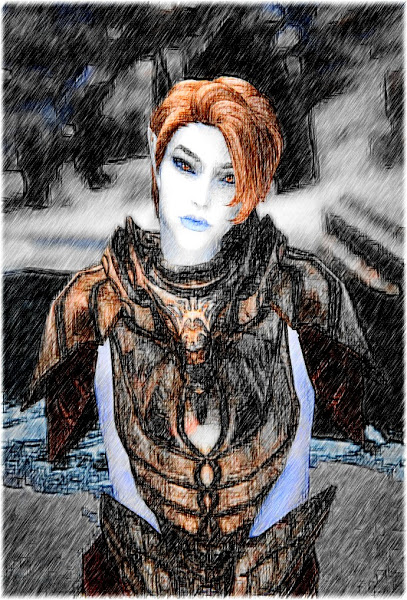 Lyra (Chiara): Dubbed “The Thieves’ Guild’s Youngest Doyan”, Bosmer Lyra created quite a name for herself in her younger years, but her knack for infiltration and investigation have made her quite sought after well into her 60s. Usually spending her time cycling between the Thieves’ Guild and the Mages College, she is always on the lookout for anything of value- be in treasure or intelligence. 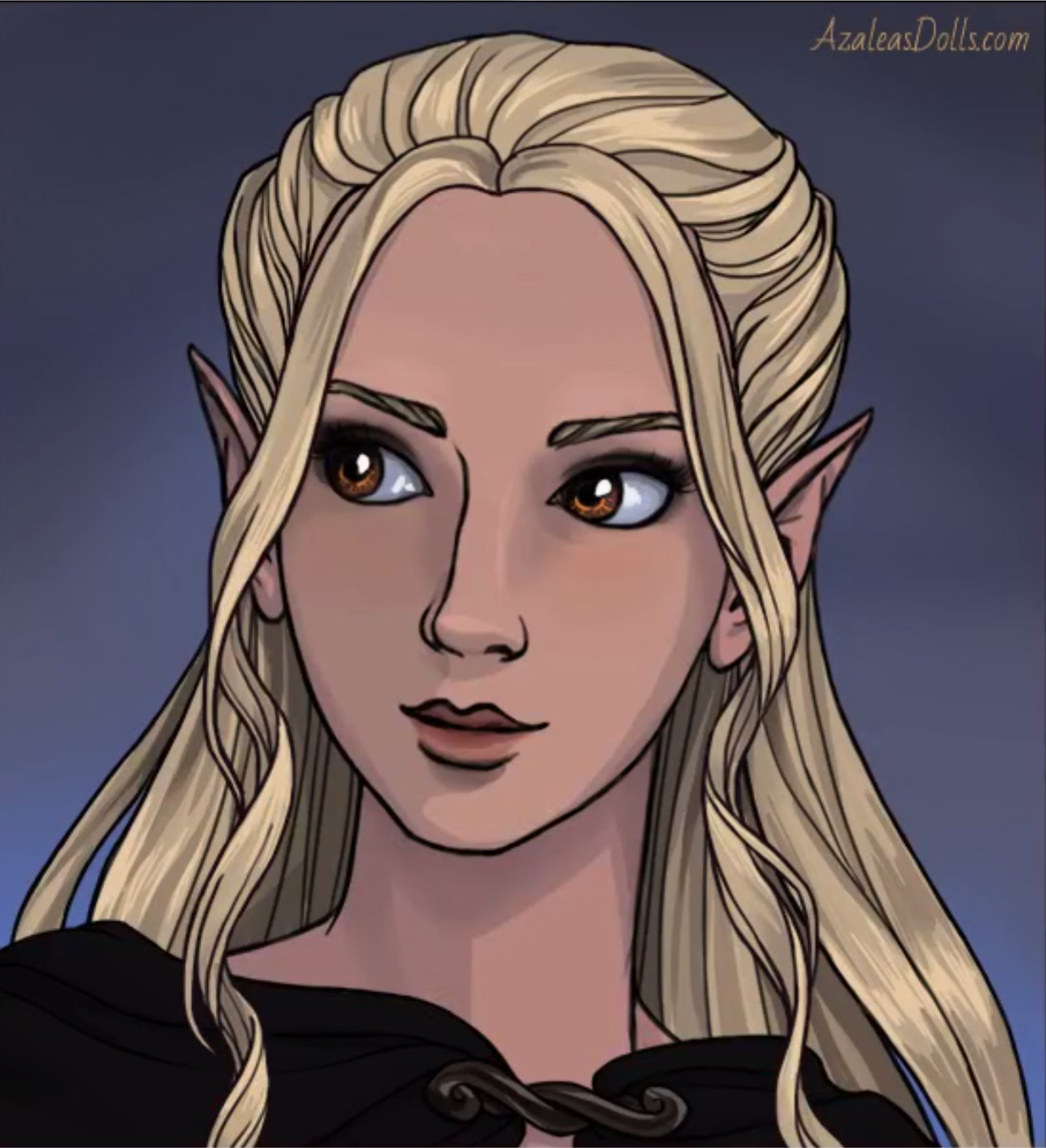 Eryn Eldenwood (Ya Boi Ray): Eryn, a wandering, blind Bosmer, had always been told she was to play a part in an important “story”, though she knew she would never find out the ending until she ventured into the unknown. Despite her disability, she sees and hears far more than the average mer, drawing her sight from magic and the forests themselves. 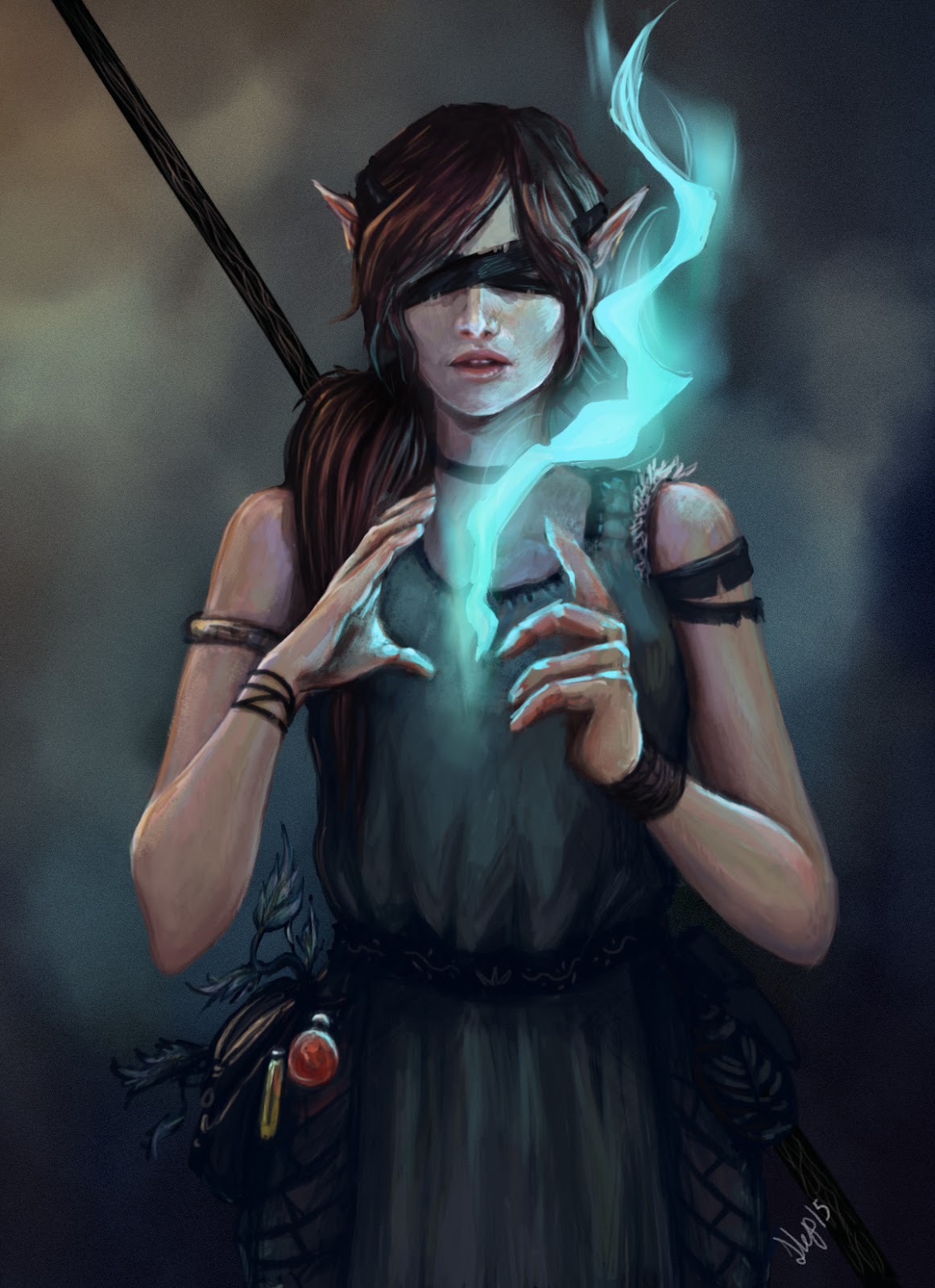 Liulfnir Storm-Blade (Hero of Kvackers): A pale Nord with a dark appearance, Luilfnir is a silver-tongued mercenary with a history of taking some questionable jobs. Riddled with scars and donning an impressive collection of armor and arms, he looks- and more often than not, acts- the part of a tough warrior, but he has the best intentions for those that he allows close to him. 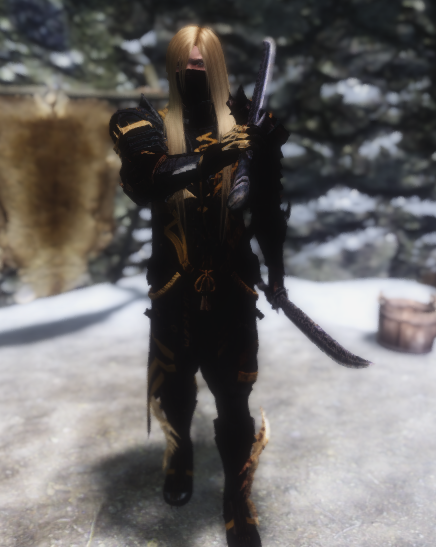 Avenach the Red Wolf (Gorlack): Quiet and resourceful Avenach is a young Nord hunter and wanderer who relies on simply on a bow, a quiver of arrows, and his own fists to make his way in the world. Initially standoffish, he typically has the good of others in mind, willing to heal those who are injured and share a meal with those who are hungry. 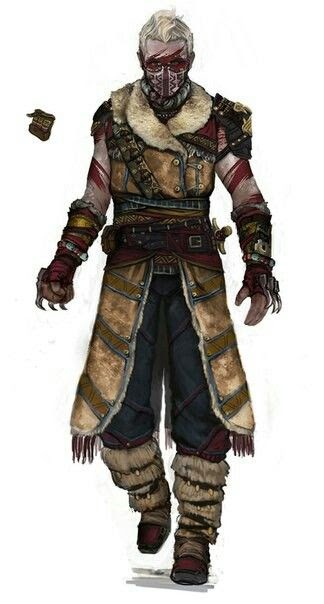 Ein Stone-Fist (Ein): A “True Son of Skyrim”, Ein is an impressive warrior skilled in both hand to hand combat and warfare. Having grown up in the shadow of his “Uncle Ulfric”, the Nord seeks to preserve his country’s legacy so that their sacrifices will not be in vain. His convictions are strong but his drive to protect his comrades and allies is far stronger. 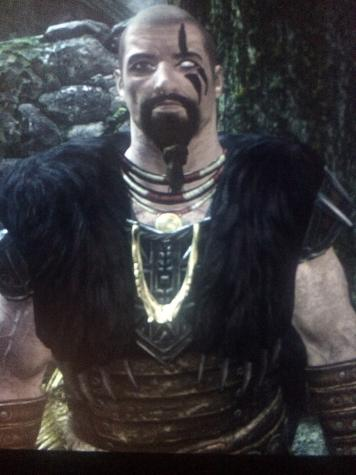 Ambarro (Mistflower Swan): The mischievous and boastful Ambarro hides his Po Tun heritage behind the guise of a simple Khajiit. Using a mix of martial weaponry learned from his village, this Shinobi seeks to discover the motives of any potential threat and cause mischief wherever he can in the name of what he believes is good.

(Image Not Available Yet)

(This section will be updated as the campaign progresses. To make sure you’re alerted to updates, follow this blog!)