I've always thought it would be cool to design a new magic system for a TES character, but the Elder Scrolls games are very limited in how they allow mechanics to be tweaked or combined. Crystallurgy is my attempt to draw upon several vanilla gameplay mechanics in conjunction with one another to simulate a different type of magic.

This started out as a very different concept, and indeed, over the months, the build has changed so much that I'm not sure any of the original concept is still intact -- it's a proverbial ship of Theseus. It's a bit surreal to finally have a presentable build out of endless pages of concepts, but I'm very proud of how far along this build ended up coming.

Just for clarity's sake: Talk of "crystals" herein will refer either to potions (colored crystals) or else soul gems. For roleplaying purposes, I viewed these as being the crystals embedded within the equipment presented below. All colored crystals (i.e., potions) referenced herein will be listed in the "Crystals of Vitality" alchemy section. Crystallurgists are mysterious artificers who seek to gain an understanding of the relationship between souls, gems, and magical energy. Ancient techniques passed down through the reclusive guild grant Crystallurgists the unique ability to harness latent energy from souls and spells. This energy can be converted into pure Magicka, or stored in focused crystals for later use.

Very few political and social circles in Tamriel understand the subtle nature of soul artifice. Most would view it as an offshoot of Necromancy -- and in some ways, perhaps it is. To protect themselves from persecution, Crystallurgists must obtain proficiency with all of the tools at their disposal, gaining not only a theoretical aptitude but a practical one as well.

A master Crystallurgist is capable of using soul energy to incinerate her foes, bolster her own defenses, restore her own magical energy, call forth warriors of spiritual energy, and control entire armies. Furthermore, she can create truly godlike weapons through secret arcane techniques.

In short, the Crystallurgist is a force capable of dismantling an entire kingdom single-handedly.

Abilities » Seeker of Shadows, Dragonborn Frost, The Fire Within Useful enchantments include fortifying relevant magic schools -- Destruction, Conjuration, or Alteration. Other helpful enchantments include Regenerate Magicka or Health, as well as Fortify One-handed or Light Armor. Alternatively, simply use unenchanted gear with a decent temper bonus via a custom Fortify Smithing potion (and while you're at it, throw in any Fortify Smithing gear you happen to come across). Northwatch Keep is a pretty good spot for finding unenchanted glass armor starting at level 36 -- before then, Elven gear will suffice.

The Crystallurgist is able to fuse crystals into her weapons, unlocking their full potential without investing in the Enchanting skill. At lower levels, she uses a custom Elven War Axe called Asulon, enchanted with 10-15 Fire Damage and Soul Trap.

In the endgame, the Crystallurgist favors Ebion, a Stalhrim War Axe with Chaos Damage. By around level 35-40, you should be roughly level 50 Enchanting -- purely from disenchanting generic apparel and constantly recharging your weapon. With Seeker of Sorcery, Augmented Flames/Frost, and an Enchanter's Elixir, I had +33 Chaos Damage -- an average of 50 elemental damage per hit. And again, that's without ever perking or grinding the Enchanting skill!

Once you craft your endgame Ebion, be sure to open up The Sallow Regent and switch back over to Seeker of Shadows for optimal Alchemy!

Here is a list of useful "crystals" (i.e., potions) for the build. In partricular, take note of the first two: the White Crystal and the Red Crystal -- these will have a dramatic impact on gameplay.

I don't see many Alchemy builds that take advantage of the Seeker of Shadows power. Which is a shame, because it can make a real difference: It will make +82% Fortify Alchemy, easily obtainable through generic/pre-enchanted apparel, behave exactly like +100% Fortify Alchemy. I used a combination of Muiri's Ring, Bracers of Major Alchemy, and a Circlet and Necklace of Peerless Alchemy.

As is my custom, all ingredients listed here may be cultivated via the Hearthfire garden and greenhouse, or the fish hatchery if you build in Hjaalmarch.

Combat with this build is quite dynamic. At the lower levels, I tended to take a rather methodical approach, surveying situations and ascertaining how best to use my more limited skill set. But in the endgame, combat becomes a blur of high-powered spells and Shouts, working together to wreak havoc on enemies of every shape and size.

A staple of the Crystallurgist's skill set is the ability to manipulate energy through her energy crystals, both actively and passively, as outlined below:

End-Negative Crystallurgy is fairly low maintenance, best suited to simple situations. Essentially, it refers to activities that consume stored energy, and convert it into useful qualities. Some examples include:

End-Positive Crystallurgy is a bit more high-risk, high-reward. This refers to activities that refuel your crystals with new energy taken from your enemies (magical forces, and life force). Such actions include:

The Crystallurgist can easily swap between end-positive and end-negative Crystallurgy at will, simply by combining a White Crystal with the Aetherial Crown and Asulon. This initiates a fully end-postive approach. These two methodologies complement each other very well, allowing the core of the build to remain unchanged while providing decidedly different play styles, with different strengths and weaknesses. It really keeps gameplay fresh deep into the endgame.

When fully invested in an end-positive loadout, the Crystallurgist is unable to passively refuel her Magicka reserves at all. However, a clever artificer is always prepared: Blue Crystals will be very handy when adopting an all-out end-positive approach. And enemy magic users will unwittingly restore your crystals for you as well! 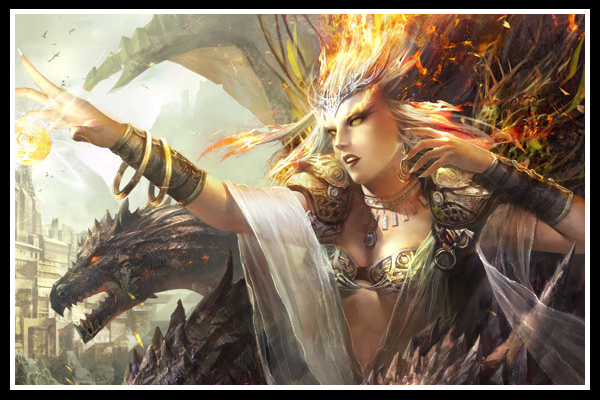 I've already talked about Ebion, the Crystallurgist's elite endgame weapon. To make this weapon even more impressive, the Crystallurgist can draw energy from a Red Crystal to briefly push its enchantment magnitude from +33 up to +83!

This same Red Crystal is one of the staples of the build's combat. Use these liberally! In addition to their generous boost to Ebion's power, they also provide a glorious effect when coupled with Flame Cloak: They affect both the damage and the range, taking a dual-casted cloak up to a whopping 45 DPS, with a wide enough radius to fill the entire entry hall at Fort Dawnguard. It's basically like a movable Master level AOE spell, with a shorter casting time and lower Magicka cost. This is easily one of the coolest combos in the game.

The Red Crystal also affects other spells, of course. In particular, key applications include:

I tended to use Fire spells more than Frost, since Aspect of Terror adds that extra +15 damage in all cases. But Frost spells are good to have on hand in case something resists Fire, or if you need to slow enemies down. And as you get stronger, the difference in magnitude between Frost and Fire becomes less significant.

In terms of Shouts, it's quite the opposite: Fire Breath doesn't seem to benefit from the Red Crystal meaning that Fireball is actually nearly as damaging as Fire Breath. And Incinerate blows Fire Breath out of the water....

One the other hand, Frost Breath does benefit from the Red Crystal, and Dragonborn Frost allows you to instantly take an enemy out of the equation without wasting Magicka or casting time on Paralysis. This can be quite handy!

On Souls, Summons, and Seduction 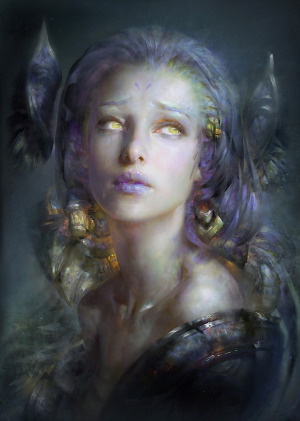 Soul Tear deals an instant 300 damage, even to enemies such as dragons that resist the reanimate effect. This makes it more practical than either elemental Shout when it comes to damaging boss type enemies -- especially since many of them would resist the ice paralysis from Dragonborn Frost.

Soul Tear is also useful for its reanimation effect. I especially like using it on enemies that normally resist reanimation, such as giants and mammoths. It benefits from Necromancy and Dark Souls too, so your Soul Torn enemies are reinforced, and last longer than the Shout's cooldown time in the endgame!

In addition to Soul Tear, the Crystallurgist uses her crystal reserves to summon corporeal energy in the form of Soul Cairn summons, culminating in the Wrathman. These are effective allies, and they have a low Magicka cost to conjure. Note that they must be summoned prior to equipping the Aetherial Crown if you wish to employ fully end-positive Crystallurgy in battle: Once you equip the Aetherial Crown (after activating a White Crystal) you will be unable to summon anything!

Illusion is decidedly a minor skill here, but even with the Apprentice spells, the Crystallurgist can do a lot: With a Violet Crystal and the perks listed, she can Calm humans up to level 37, and creatures up to level 35!  You can, of course, go up to the Expert spells and/or take the Dual Casting perk to get more out of Illusion, but I found this to be unnecessary. I mostly used Illusion only in emergencies, or when I wanted to toy with my enemies before I finished them off.

In the early levels, Elven gear and Asulon will complement lower level spells and more pedestrian potions just fine. Even with lower Alchemy and Novice/Apprentice spells, you can get some serious power.

I suggest starting the Dawnguard quest line as early as possible, because you'll want that Ring of the Erudite and those Soul Cairn summons. I personally ditched that quest line and cured my vampirism A.S.A.P. after exiting the Soul Cairn. As for skills, definitely keep Alchemy ahead of everything else; maxed Alchemy will make everything else easier for you.

Being able to switch between 0% Spell Absorption and 100% Spell Absorption on the fly is truly awesome -- especially for a summoner. With the +110 Magicka and complete immunity to magic, the Aetherial Crown's active Crystallurgy approach may sound like the ideal method. However, I played about 2/3 of the time without the crown on once I'd obtained it -- passive regeneration is quite nice in its own right, and the glass helm provides some more AR in addition to activating a couple of Light Armor perks.

With all enchantments in effect, you should be able to get to around 450-500 Health and Magicka with an end-negative approach (without the Aetherial Crown). I found a pair of Glass Boots with +60 Stamina as well, so I just ticked that up to 200 for the nice round number (including the 30 from the Gauldur Amulet as well). There's no real need to invest in Stamina though.

Magicka buffs include the Altmer Highborn (+50), Ring of the Erudite (+100), and Gauldur Amulet (+30). With the buffed Aetherial Crown in an end-positive state, you gain a further +110 Magicka. And you can craft a Blue Crystal to add a further +120, for a total of +410 to the base 100 Magicka (in addition to approximately +10 Magicka every three levels). When not wearing the Aetherial Crown, you lose the 110 Magicka, but your Regen will be quite solid thanks to the Ring of the Erudite. I also had +80% Regen from my helmet for an extra kick.

∙ Description » The Crystallurgist creates a sphere of hellfire around herself, filling entire rooms with blinding infernos that dish out a staggering 45 damage per second to all enemies within a range that is greatly enhanced by both the crystal and the dual-casting perk.

∙ Description » The Crystallurgist takes an enemy out of the equation, and while she focuses on a different opponent, her next target grows ever weaker as he basks in sublime ignorance of his impending demise.

Thanks to Matt Feeney, Zach, and Mason for input and advice!

For a glimpse of Crystallurgy in action, check out my short story: "Night on the Border, or: The Crystallurgist"