Revamp for my favorite vamp playthrough! I posted this build awhile ago and I'm happy to say it reached decent success, but I want to see if I could push it to the next level. As some of you may know, this build was inspired by (obviously) the Keerilth vampires of Valenwood, first mentioned in the book, Immortal Blood. Set apart from the usual vampire with the unique ability of control over mist. The Keerilth is a vampire barbarian found in the misty forests of Valenwood. They are noted for their amazing ability to transform into a cloud of mist and manifesting the mist into weapons and armor. The Keerilth is an extremely predatory creature of instinct, stalking its prey before striking from the shadows. 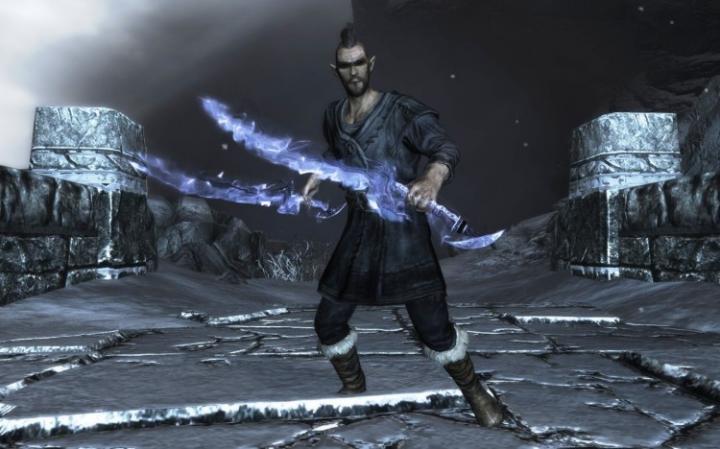 Stone: Shadow Stone- Great for ambushes, combined with the Muffle spell, you become a non-existant shadow, unseeable and completely silent.

Equipment: The Mourner's Clothes, Miraak's Boots (they have an armor rating but don't interfere with Mage Armor), Ulfric's Bracers, Ring of Namira, any circlet and necklace.

Conjuration is an important part of this build, it gives us a very important tool, Bound Swords! They're completely weightless which allows for a ton of power attacks, are only novice level spells, give you a huge amount of XP, and, of course, are of Daedric quality! This is incredibly important as I didn't take Smithing, nor did I ever touch a forge or a workbench, which was very satisfying. It's also good to note that even though I didn't put any perks into Atromancy or Necromancy, the Frost Atronach is still very powerful, especially due to it's ground pound attack that will stagger anything in the game!

One-Handed is used to increase our damage done with the Bound Swords as well as increase our attack speed by 35%. It gives us access to Fighting Stance which reduces our power attack cost to only around 30 stamina points. The Critical Charge is mainly used in combination with the Silent Roll perk in the Sneak tree, this combo will give us huge power behind our first strike! The Dual Savagery perk (dual wielding power attacks do 50% more damage) is a very important perk, especially since we aren't taking Smithing or using self-enchanted weapons. This perk (and build itself!) is increased even further with the Dragon Aspect shout (Explained in the Combat Section).

I debated on putting perks into Sneak as my detectability was already covered by the Muffle spell, but the call of 6x damage, Silent Roll, and Shadow Warrior was too strong to refuse. I already covered the use of Silent Roll and 6x damage is self-explanatory, so let's talk about Shadow Warrior. Turn invisible for 1 second while shrouded in something that resembles mist? Yes, please, thank you very much. This allows to perform sneak attacks in mid combat, it also gives us time to pop either our Shadow Stone power or the Embrace of Shadows to slink back into the darkness once more.

I debated on Enchanting, I was pretty powerful without. You might call this a late game add-on, and you'd be right. But that doesn't mean it isn't a very powerful add-on that allows us to focus on magicka less. Enchanting is very easy to level up late game due to my hoarding soul gems and the auto-soul trap ability the Bound Swords get. I just took ranks in Enchanter and up to Corpus Enchanter, Extra Effect would've been massive overkill! With fortifying my magical schools, muffling my footsteps (thus removing the need to use Muffle), and increasing my already massive damage output; this really took some weight off my shoulders.

Alteration, possibly my favorite magical skill. Alteration will act as our 'mist skin' so to speak. It gives us a pretty decent armor rating while letting us be completely weightless. You may have noticed I didn't take Restoration or Alchemy, Alteration's weightless armor allowed me to duck, dodge, and, if the situation called for it, bailing the hell out of there! It also gives us some fun little utility spells, I had a lot of fun with Detect Life and using it as my advanced vampire senses. Open Combat is largely spent dodging around and getting in fast swipes before backing out of reach. My main strategy was striking fast, staggering opponents with my weightless weapons, dodging attacks with my weightless armor, and slinking back into the shadows. Become Ethereal is used for a plethora of uses. In combat it is used to dodge attacks, escape off cliffs, and emergency power attacks. I'll explain the last bit, low health, no invisibility powers left, no corpses of which to feed, and one powerful enemy left, like a Bandit Chief. Just Become Ethereal, wait for an opening (right after they try to attack) and perform (a free of cost) dual wield power attack, staggering them just in case you need to perform another one. Perhaps my favorite addition from Dragonborn is the amazing Dragon Aspect shout. It increases your armor by 100 (this brings it up to 400 AR), it reduces shout cooldown by 20% (which lets us use our key shout, Become Ethereal, more often), it adds 25% frost and fire resistance (very helpful for a vampire), the ancient Dragonborn (he can serve as another distraction and he doesn't care how many Conjuration perks you don't have), and lastly, 25% more damage from power attacks, sounds meager at first, but when combined with a dual wield power attack and the Dual Savagery perk, it's a total of 75% more damage!

In Stealth, your main priority is to measure out the distance for your Critical Roll Charge. This will either one shot them or at the very least damage them heavily and stagger them (thus allowing you to hit them again, so a free kill either way). Infiltration is done easily by using Muffle+Invisibilty, I typically use this to get right behind the strongest enemy in the area, and do several dual wielding power attacks (normally the first three strikes will be stealth strikes thus doing 6x times damage). Shadow Warrior is typically used to lose enemies or get sneak attacks mid combat, but my favorite use is using it to go straight into the Shadow Stone, which provides an easy way to sneak attack any powerful enemies or take breather and let your health regeneration a bit.

This was my first build posted back in 2012 on the Skyrim Blog (later renamed the Tamriel Vault). It was updated once a month or two later. Needless to say the presentation doesn't stand up to current builds and the writing is far more amateur than what I'm capable of now (Thanks, college!). I may clean up the writing later. We'll see.

Either way, this is still an incredibly fun and simple build. It allows for a very 'clean' playthrough. Not a lot of menu-switching, no worrying about armors or weapons, and minimal crafting. In fact, I later played with this build and ignored crafting entirely; it was still perfectly viable on Master difficulty, if you play a bit more tactically (stealth attacks, better Become Ethereal uses, etc.). Low stress, combat-focused playthrough. It's a good time.