Welcome to my second build. This one is based off of a god from the Greek pantheon. I really enjoyed making this build and hope you enjoy it too. The feedback from my last build was very helpful, so thank you so much. Anyway, onto the build. Pruzah wundunne.

There are many wonders in Tamriel, but none more awe inspiring than the two moons, Masser and Secundus. As Lorkhan's body drifts across the skies of Nirn, residual energy from his divine spirit coalesces on Tamriel. Several men and women have discovered how to carve this energy into weapons of great power. Some wield them against the forces of Mehrunes Dagon while others hold swords to the neck of Dagoth Ur. Near the border between Cyrodiil and Skyrim, an elven hunter makes her way North hunting new game. Masser guides her bow; Secundus is her quiver. Race: Bosmer  |   The Bosmer start with a high skill in Archery. Their racial power is also nice for hunting and fits the character.

Standing Stone: The Atronach Stone   |  This stone gives us a nice defense against mages. The decrease in magicka regen doesn't affect us much as we only use magicka for our Bound Bow.

This build is primarily ranged. In combat, focus on the melee fighters before they can get close to you. Then pick off the ranged enemies. You'll want to pick up the Agent of Mara and Agent of Dibella abilities for a good buff. The shouts Animal Allegiance and Kyne's Peace shouts on top off the Command Animal racial power give good tools for controlling animals. A fun but entirely optional power is Beast Form. This is a great way to embrace the Animal of the Moon without the roleplaying. 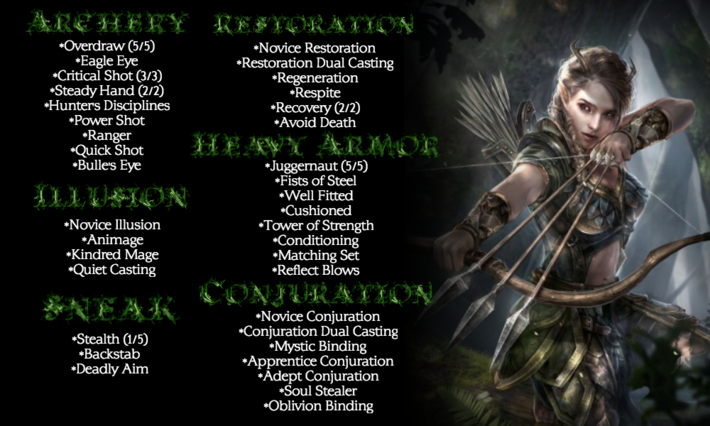 Archery: Archery is one of your main skills as your main weapon is a bow.

Heavy Armor: This skill is quite simple as it only affects your Ancient Nord Armor.

Conjuration: This skill is used in conjunction with the archery skill with your main weapon, the Bound Bow.

Illusion: This skill is perked to get quiet casting, to keep enemies from hearing you.

Sneak: This skill is lowly perked to get off some stealth damage before being noticed.

Armor: I choose to use Ancient Nord Armor for this build. This armor not only looks amazing but also provides a good amount of defense. Another good option is Ahzidal's Set. They have the same texture as the Ancient Nord Armor but have powerful built in enchantments and a higher armor rating.

Weapon: Your weapon of choice will be the Bound Bow spell. This is augmented by the Archery, Conjuration and Illusion skill trees.

Jewelry: You can use any enchantments you want for the build. For my playthrough, I used a Ring of the Major Knight and a Necklace of Fortify Stamina. 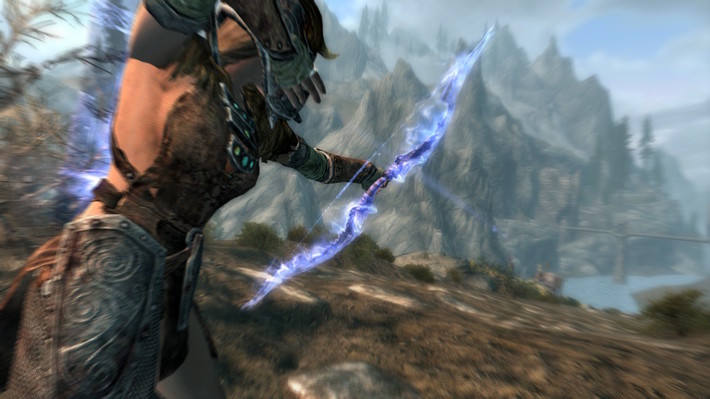 You are a hunter. You will want to kill the destroyers of nature. That means clearing out Necromancer Dens and Vampire Nests. You'll also want to help with the Potema situation. The main questlines to focus on are the Companions and the Dawnguard. The Companions are hunters like you and you'll find steadfast friends there. The Dawnguard hunt as well and the Huntress sees vampires as an enemy of nature. If you search more new prey, consider becoming the Listener for the Dark Brotherhood. Join the Stormcloaks in the Civil War questline as they have what's best for the land in mind. You will also want to defeat the dragon menace, joining the Blades in the process because who doesn't love the thrill of a dragon hunt. Also be sure to pick up new bounties while in civilization.