Hey guys, so this is my first attempt at a build, I guess. I hope I do a good job !!

These humans think themselves so superior to this one, no? This one yearns for the chance to show them the face of their arrogance, the face of the Pale Mane. They will learn. Before I begin, I think I should go over a few mods that are imperative to this build (well, maybe not so much, but I used them for this build; you could probably make do without them, but then it wouldn’t be my build anymore!)

As a Khajiit, you can move faster, Sneaking is more effective, and you have night vision after you acquire 50,000 lifetime gold

This build is pretty much centered around what Ordinator enables you to do as far as being a thief/assassin is concerned, but that’s not entirely what this build is

This mod certainly has its uses, particularly where a Rogue character is concerned

Several of the Stones altered by this mod provide the perfect benefits to your Pale Mane; though you don’t need them, they are definitely useful

This heavily modifies the dialogue options you have in-game to better fit you playing as a Khajiit (note that this mod does not affect you when playing as races other than Khajiit, so you don’t need to disable it between files). Again, not necessary, but I find it makes the build more immersive

This is purely for entertainment; it simply adds roughly twenty new Khajiit NPCs into the game

-Legacy of the Dragonborn (optional)

You by no means need to use this mod. In fact, I only used it for the Forsworn Daggers that I used throughout most of the game

Race: Khajiit. With Imperious active, Khajiit’s have a bonus to movement speed and Sneaking

Deity: …levels 1 to 30… Kynareth OR Mephala …level 30+… Baan’Dar OR Sithis. Worshipping Kynareth boosts movement speed and stamina while Mephala grants a boost to poisons and Sneak attack power from behind. Baan’Dar boosts Pickpocketing and eventually allows you to place explosive bottles of skooma in people’s pockets while Sithis grants a boost to all Sneak attacks and greatly boosts Sneak effectivity (plus, the Call of the Void power is pretty neat)

Stats: 1…1…2. Considering much of your time as The Pale Mane will be spent running (whether you’re running to your target, or running from guards, or just running), you need a heavy focus in Stamina. I recommend that, once your Magicka reaches a base of 200, you switch to 0…1…2, so you can devote more of your attribute points into Stamina. Health you can keep leveling. You’re going to need it since this build’s focus is not combat, but everything else.

Weapon: Anything that Poison can be applied to. I started with a Forsworn Bow but eventually swapped it out for dual-wielding daggers. I kept my base damage under 10, using Forsworn Daggers for most of the game (they have a base damage of 7).

Armor: User’s Discretion, but keep it below an overall base (assuming you wear a full set of 4 pieces) of …60 for Light Armor… and 80 for Heavy Armor… I used Forsworn Armor for most of the game, but the beauty of this build is that, since combat has almost zero focus on this build, you don’t really need to worry about your armor.

Shouts: (Keep in mind that ALL OF THESE are optional; you’ll find it tough to kill Dragons with this build, so you may choose to skip most of these shouts, but I will list all the ones I found were incredibly useful to the build) Aura Whisper (so you can see where potential targets might be hiding), Become Ethereal (so if you need to, you can hide in plain sight and recover health and stamina), Bend Will (so you can control the minds of those around you and make it easier to steal from them), Disarm (to make it easier to take down challenging foes who fail to resist), Marked For Death (please see Disarm), Throw Voice (so you can direct your targets to where you want them to be before you strike from the shadows)

Spells: Though Magic is certainly not a focus, there are a few spells you will find irreplaceable.

So let’s begin with… The Pale Mane is a Khajiit Rogue who specializes in stealth and chemical warfare. She uses a combination of shadows (Sneak) and Illusion magic to blend into her surroundings, effectively becoming invisible to her targets. Depending upon the target, she might choose to rob them blind, relieving them of their armor, weapons, and valuables, without them even noticing! Or she might stalk them silently from the shadows, waiting for the opportune moment to plunge her blades into their backs. Also at her disposal is a slew of Dragon Shouts to make her job even easier. She is an agent of the Thieves Guild and the Dark Brotherhood, using her skills to make both clans wealthy beyond belief.

Kynareth guides this one. Mephala watches this one. Baan Dar instructs this one. Sithis hides this one. We are shadow incarnate, and if we set our sights upon you, there is no escape from our cold embrace.

The Pale Mane plays very similarly to a cutpurse, an assassin only working for the money, but with a slightly more religious goal. She steals and kills, all from the shadows, to appease the deities she worships. Kynareth, loosely, by being deft, adroit, and quick. Mephala, for using poison and backstabs. Baan Dar by picking the locks of doors and chests that stand in her way to steal from her enemies. Sithis by using the shadows to become invisible and strike her targets when they least expect it. In order to make these goals a reality, it might help to know what perks you will need…

Which brings us to…

In order to stay as balanced as possible, while still maintaining maximum effectiveness, I’ve completely nixed all combat skills in favor of Illusion. The only crafting skill is Alchemy, which is useful enough in combat, unless encountering too strong a foe – they did invent running away for this purpose, you know. This build reaches maximum effectiveness at the tender level of 46 (57 if you ignored my advice and don’t use 20% More Perk Points; or, if you opted for 50% More Perk Points instead, you reach this at level 39).

Instead, you will use your gifts of Illusion and Sneak to stick to the shadows and kill an enemy before they even notice you. Your odds at success will be heavily influenced by the poisons you mix and apply to your weapons, hence the need for Alchemy. Additionally, if you manage to fit the Shouts into this build, you become an effective weapon, maneuvering your targets closer to you, making it that much easier to strike them unawares.

You also have Illusion and Sneak in order to escape from your foes – or that fool of a guard who chose to stick his face where it didn’t belong as you were about to rob the Jarl blind! Additionally, the Alteration Spell “Drop Zone” comes in particularly handy for quick getaways.

Stick to the shadows, my friend, and you will not easily miss. You will find your enemies…well, they come to you eventually. All meet their fate. It is inevitable.

Though I have little artistic talent and cannot make my own photos to accompany these skills, I can, at least, still try my hand at providing you with malicious and effective combos of your skills to give you an edge over your foes.

A devastating poison you have crafted thanks to all the knowledge of alchemy you have. With your perkspread, this little vial will kill most characters – and even if it doesn’t, it leaves them weak, unable to regenerate, and in a wild bloodlusted frenzy.

Using the gifts bestowed upon you by Lord Sithis, you place Death’s Tincture into the pocket of an unsuspecting target, knowing their life is now limited.

What’s Mine is Mine, and What’s Yours is Also Mine (Potion of Fortify Pickpocket + Ghostwalk + Stalk the Prey)

Using the gifts bestowed upon you by Lord Sithis, you ingest this useful potion, then cast Ghostwalk to sneak up on your target, steal all their belongings, then easily warp to safety and hiding.

Using gifts stolen from Dragons, you melt into the shadows while your enemies are illuminated around you.

You melt into the shadows, forcing nearby enemies to lose sight of you.

You are hidden behind the enemy, placing Death’s Mark (Cursed Coin) into the pockets before using the knowledge of dragons to render their resistances to nothing before sticking Sithis’ Blade deep in their unprotected back, hopefully killing them instantly

Mage's Bane (Circle of the Moons + Poison of Ravage Magicka)

Using this Spell and Poison in tandem, you can quickly whittle through a tough mage's arsenal by destroying his magicka and preventing him from recovering it. Then he's yours to do with as you will.

Using this invisible and disembodied eye...ghost...thing...you can find exactly where and what your targets are hiding. Pairs exceptionally well with You Can't See Me But I Can See You

What’s Mine is Mine, and What’s Yours Is Also Mine will be used probably the most often, giving you a hefty advantage in stealing your mark’s possessions. Alternatively, the combination of Sithis’ Blade and Fuse With Shadows will ensure both an instant-kill and easy means of escape on the off chance someone sees you. Touch of Death should be reserved for enemies that you can’t kill otherwise – Jarrin Root is incredibly rare. You Can’t See Me But I Can See You is just one of many ways you can then combo with your other Dragon Shouts to set up some interesting scenarios. I am particularly fond of using it, then Throw Voice to put all my marks into position where I can easily strike them all quickly with Sithis’ Blade.

As for finding and choosing your marks… 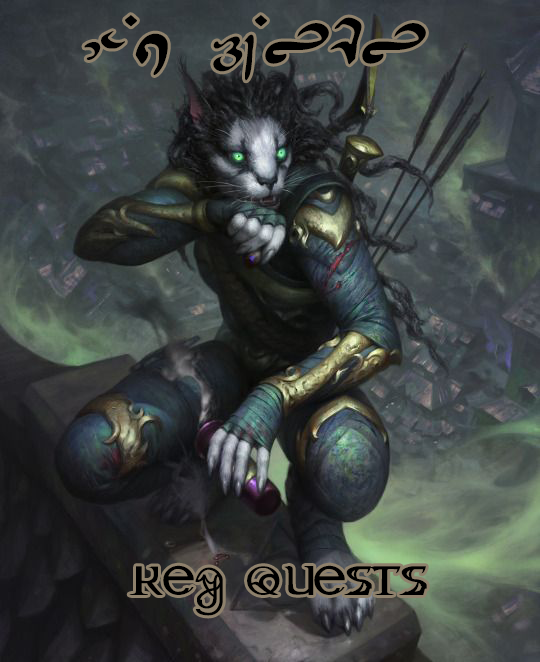 Innocent Lost – obviously, it will be difficult to be an agent of Sithis and the Night Mother without beginning the Dark Brotherhood Questline. You do not need to complete it, but if you do, you have an infinite supply of targets at your discretion.

A Chance Arrangement – obviously, it will be difficult to be a successful thief if you don’t align yourself with the Thieves Guild. You do not need to complete it. In fact, becoming a Nightingale would require serving a different Daedra, potentially incurring Mephala’s wrath. All you need is access to Delvin Mallory and Vex and their infinite mark quest.

The Whispering Door – in order to more effectively serve The Whispering Lady, you must retrieve her blade. Using it is up to you, just make sure you get it at some point.

Return to Your Roots (optional) – the final reward for this quest allows you have a much larger supply of useful potions and debilitating poisons at your disposal, but it isn’t necessary. As far as gameplay is concerned…I think you know enough of the build at this point to be able to surmise that for yourself. Steal from everyone. Kill those who have earned it. Worship the Deities who favor the shadows. And have damn fun doing it.

I’d like to thank Curse-Never-Dying, Chris Diokno, Lee Fiskillis Carpenter, and Teccam for all their wonderful help and advice in how to construct my first build. (Though Curse did not help me directly, I modeled my build after some of his.) I’d also like to thank Fimvul for assistance with some of the more lore-oriented points of my build. Finally, I’d like to thank my cat, Sekhmet, for being a total pain in my ass and the inspiration for this sneaky cat build. Hope you guys enjoyed it, I might tackle another one sometime in the future.