A mysterious figure from the Alik’r Desert, the Rurouni claims obscurity but is all too well known to the Thalmor. During the Great War, he was a swordsman of unparalleled skill known as Battōsai the Merslayer, responsible for the deaths of several Aldmeri Generals, and following the signing of the White-Gold Concordat, played a key role in Hammerfell’s successful resistance against the Dominion. For reasons unknown, however, he has since cast aside that role and now wanders Tamriel, seeking only peace… A variety of samurai/ronin-esque builds have been made before, and at first glance, this may seem like one of them. However, two things separate this build from the rest of the pack. First is the utterly minimalist approach to the build, using only One-Handed and Block (aside from a single perk invested in Smithing for sharpening your sword). As a result, this is a 0 AR build, relying entirely on well-timed blocks and dodges for defense. Secondly, as some of you might’ve noticed already, this build is a loose adaptation of Kenshin Himura of Rurouni Kenshin fame. While being familiar with the source material will help you appreciate the build more, it’s hardly necessary for understanding it.

Race: I recommend Redguard, as it provides the best skill boosts for the build (+10 to One-Handed, +5 to Smithing and Block), and both the 50% Poison Resistance and Adrenaline Rush are useful for this character, but any race could work.

Stone: Since this build lacks any sort of defense against magic, and certain magic attacks (such as shock spells or midrange dragon breath attacks) are hard to avoid, I went with the Atronach. Be sure to drink any Fortify Restoration potions you have before selecting the stone to increase its magnitude.

Stats: 0/2/1. The Rurouni doesn’t use any magic, enabling him to focus on health and stamina.

Shouts: Slow Time is used for a particularly important combo, so pick up the word for it in Hag’s End (you don’t need to get the other two). Aside from that, Elemental Fury provides a quick and easy way to take down tough targets, Become Ethereal is an easy way to avoid ranged attacks, Whirlwind Sprint enables you to close in on your enemies quickly, and Unrelenting Force is a great crowd control tool. Nothing too surprising here. The presence of the perks on the left side of the Block tree may seem unusual, but that’s because both Block Runner and Shield Charge are needed for a couple different techniques that the Rurouni uses. Grabbing all these perks will run you up to level 27, leaving room for other perks if you’d like. In particular, should you feel like using Dragonbane or Bolar’s Oathblade, you’ll want to perk Arcane Blacksmith too.

In the source material, Kenshin practices Hiten Mitsurugi, a style of swordsmanship that utilizes godlike speed to fight multiple foes simultaneously, a concept which translates well into Skyrim. The only question is, how does one go about achieving godlike speed in Skyrim?

Enter the Shinsoku technique. By using one word of Slow Time immediately after the slowdown effect of Quick Reflexes ends, Slow Time’s duration is extended significantly. This is absurdly useful for the Rurouni and by far the most effective of all his techniques, allowing him to effortlessly dodge his opponents and defeat them before the Slow Time effect even ends. That being said, there’s more to combat than simply activating Shinsoku and calling it a day since there are plenty of other tactics and strategies to keep in mind.

One of the most important things to do when fighting as the Rurouni is to keep moving. The nice thing about one-handed weapons is that you can stay in motion while swinging your weapon, unlike two-handers, where you slow down to a crawl during swings. Thus, you should always try to keep moving in order to avoid enemy attacks, stopping only when absolutely necessary (such as to perform a power attack). If you’re unable to avoid an attack, stop it with a well-timed block, or better yet, preempt it with a bash if you can.

Another useful strategy is to move in close enough to your opponent to bait them into attacking, but far enough away that you can dodge it. When you do, you can follow up with a couple swings of your own. In some cases, and with practice, you can even do an “in and out” type thing, moving in to hit your enemy, moving out before their attack hits you, then moving back in to hit them again, and so on.

Archers are perhaps the most difficult enemy to fight as the Rurouni, since it can be difficult to dodge arrows while in the midst of melee combat with other opponents. To counter this, all you have to do get close to the archer, which will prompt them to draw their melee weapon (usually a simple dagger). Unless you put a good deal of distance between you and the archer, they will stick with using their melee weapon instead, making them much more manageable. While Shinsoku is by far the most important of the Rurouni’s abilities, it’s certainly not the only one. The following techniques are also part of his repertoire.

Ryūkansen: The Rurouni is capable of using his godlike speed to avoid charging enemies. Those who lunge at him might strike at nothingness, only to find that their target has reappeared to their side or back.
The slowdown effect from Quick Reflexes lingers a little after disengaging block. Thus, with good timing, you can disengage the block and use the lingering slowdown effect to dodge the power attack instead by sidestepping it, or better yet, circling around to the enemy’s back. This is particularly easy to do against opponents performing a charging power attack. Once you’ve dodged the attack, you can either follow up with an attack of your own or use Slow Time to activate Shinsoku.

Advanced Ryūkansen: The Rurouni’s dodging capabilities increase in proportion with the number of opponents he’s up against. The more attacks he has to dodge, the more openings there are for him to utilize.
Quick Reflexes works wonderfully when paired with Block Runner. With the two of them combined, you can use the slow time effect to avoid enemy attacks without disengaging block, enabling you to reap the benefits of quick reflexes while moving at full speed. You can basically run circles around your opponent while he’s forced to complete the power attack animation in slow motion. This becomes particularly pronounced against groups of opponents, where any one of them might be power attacking at a given time, giving quick reflexes more opportunities to activate. In the off chance that an attack does connect, however, it’ll be hitting your sword rather than your soft flesh, as a result of staying in block.

Ryūsōsen: The Rurouni’s godlike speed enables him to deliver a flurry of sword strikes so fast that the eye can barely discern them. The sheer speed and number of attacks makes them almost impossible to block.
With a Blessing and Amulet of Talos, Shinsoku will extend Slow Time’s effect past its cooldown by a significant margin, especially if you enhance the amulet with a restoration potion. Thus, once the cooldown period ends, you can use Elemental Fury to deliver a flurry of strikes while still under the effects of Slow Time.

Ryūmeisen: A favored technique of the Rurouni is to charge into an opponent with the broad side of his sword. The force of the impact sends the target flying, making it easy for the Rurouni to execute follow-up strikes.
By sprinting into an enemy and pressing the block button the moment you make contact, you can activate Shield Charge without actually using a shield. Needless to say, it’s a useful tactic for the Rurouni.

Ryūtsuisen: The Rurouni is capable of using his godlike speed to seemingly disappear into thin air, only to reappear and deliver an incapacitating blow.
The problem I have with Paralyzing Strike is that performing a backwards power attack usually puts you out of range of your opponent. An easy way to get around this is by waiting until your enemy starts advancing on you before using it, but doing so usually results in you getting hit as well. This isn’t too big a deal for armored builds but it can be disastrous for a 0 AR one. Thus, by using Become Ethereal first, you can use Paralyzing Strike without fear (or stamina, for that matter). The Hiten Mitsurugi style of swordsmanship emphasizes the importance of wielding its expertise for the good of the people, absent of allegiances or biases of any sort. In accordance with this, the Rurouni wanders Skyrim, avoiding involvement in the Civil War but helping other people in any way he can. Go from settlement to settlement, listening to people’s troubles and making every effort to help them out, never spending too much time in one place. Since you are a wanderer, don’t bother with a house; though feel free to find a non-respawning container to store your things. Also, since you look after the well-being of the people, do not commit any crimes, which means that killing or pickpocketing Fultheim for his Blades Sword is out of the question. With regards to questlines that the Rurouni can pursue, I recommend the following:

Companions: Once you escape Helgen, I advise heading to Jorrvaskr and completing the Companions questline up to the completion of Proving Honor in order to get a Skyforge Steel Sword. Being identical to the Blades Sword in all but name, appearance and value, it makes for a good substitute in the early going. Furthermore, aside from expert trainers in One-Handed and Block, Eorlund Gray-Mane will train you in Smithing up until level 90, essentially eliminating the need to grind Smithing the conventional way. From a roleplaying perspective, it also makes sense to join the Companions, since their radiant quests enable you to use your swordsmanship to help the people. Depending on your feelings on becoming a werewolf, you may choose to either complete the questline or stop it after Proving Honor.

Main Quest: This one’s important for several reasons. You’ll get all three words for Unrelenting Force as you progress through the questline, as well as one word each for Whirlwind Sprint and Become Ethereal, not to mention the fact that you need to defeat Mirmulnir to unlock shouts in the first place. Also, since Fultheim’s Blades Sword is off limits, the only way you can obtain one is by progressing through the questline up until you have access to Delphine’s secret room. Finally, from a roleplaying perspective, it's obvious that Rurouni would want to save the world from Alduin.

Dawnguard/Dragonborn: Same deal as the Main Quest, only this time you’re saving the world/Solstheim from Harkon/Miraak, not Alduin. You may choose not to do the Dragonborn questline since it requires you to essentially sell your soul to Hermaeus Mora, but I think that for the Rurouni, that’s a small price to pay for saving Solstheim. 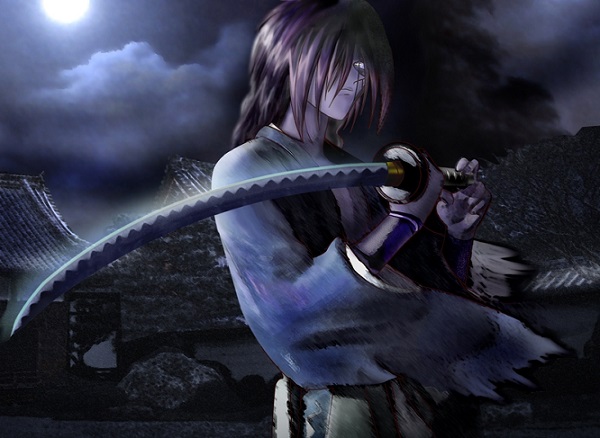 Overall, this was a pretty fun build, and one of the most simplistically complex characters I’ve ever made. Simplistic in that it only relies on two skills (Smithing aside), and complex in that it requires an advanced understanding of those two skills. For any PC players who want to try out this build, there are a couple of Rurouni Kenshin mods out there that you might be interested in: Odem's Sakabato Shinuchi Katana (adds Kenshin's reverse blade sword into the game) and Blades Samurai Armour and Kimonos (adds a kimono like the one Kenshin wears). If you liked this, then be sure to check out my other builds to see more, and watch the video below to see pcoutcast's Rurouni playthrough!