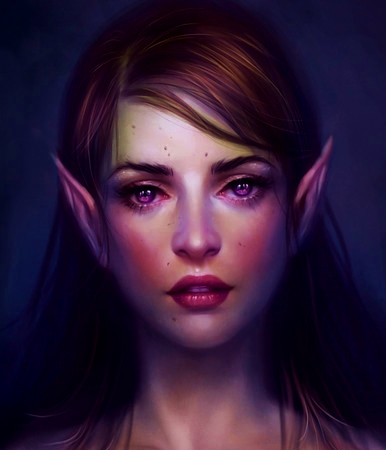 Disgraced and stripped of her titles, she fled to the nearest province which was Skyrim. Being the Court Mage of Bruma came with little power or wealth. The local Nords did not cherish her skills highly enough. They did not respect her abilities. She realized the futility of a mage who serves The Count of a city made up of people who do not value magic. Frustrated by her undervalued position she began to take what she should have been given all along.

At first she was scared with little knowledge of thievery but the rush was undeniable. Eventually her skill at taking what she wanted would rival her magical abilities. She studied daily, practicing the arts of picking (both pockets and locks). There was no door she could not enter, no chest she could not search.

More and more items seemed to disappear but nobody cared until the wealthier citizens became victims. Their complaints were dealt with swiftly by The Count of Bruma who commissioned the Town Watch to take every action they deemed "necessary to capture the thief".

When it was discovered that the thief was actually the Court Mage the court was shocked. They could not lose the peoples' faith in them by releasing the name of the thief so they expelled her. She was taken by the Captain of the Guard into the Jerall Mountains and released alone with nothing but the clothing she was wearing. Her mage proficiency helped her avoid an expected slow death but by the time she reached one of the roads of Skyrim she was weakened severely.

Barely alive, clothes tattered, near starvation - she searched for anything to eat. Even rabbits avoided the frigid cold of these mountain tops. Spotted by an Imperial patrol while trying to steal vegetables straight from a garden, she was arrested and taken to Helgen to face punishment... 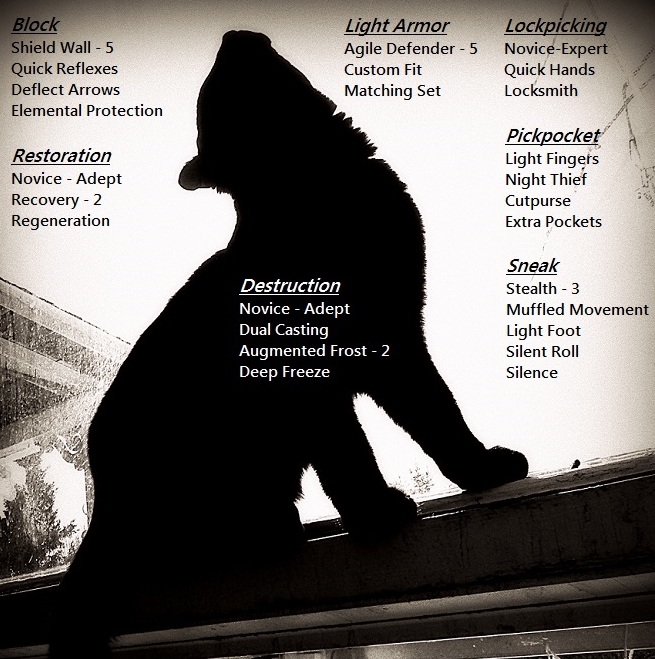 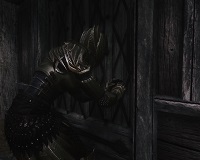 One skill I want to expand on is Lockpicking. This highly underrated set of perks will cut your wasted time dramatically. Almost all of the perks in this skill tree are time-savers. Quick Hands allows you to stop wasting time crouched by a door waiting for an NPC to stop looking your way. You can pick any lock you want at any time. Locksmith will start your lockpick in the general vicinity of the lock's opening. You no longer have to search the entire circle looking for the sweet spot. This is a huge time saver especially when you are opening higher level locks. Over the course of a playthrough the perks I chose for Lockpicking will save you hours of real time. If you are picking locks you should not ignore these perks!

This is a no crafting build which means your Elven Armor set will not give you a high AR. You cannot take many direct hits. Your shield is an invaluable piece of equipment. Block those sword. Deflect those arrows. Absorb those spells. Above all - keep your armor nice and shiny by not letting it take many hits! 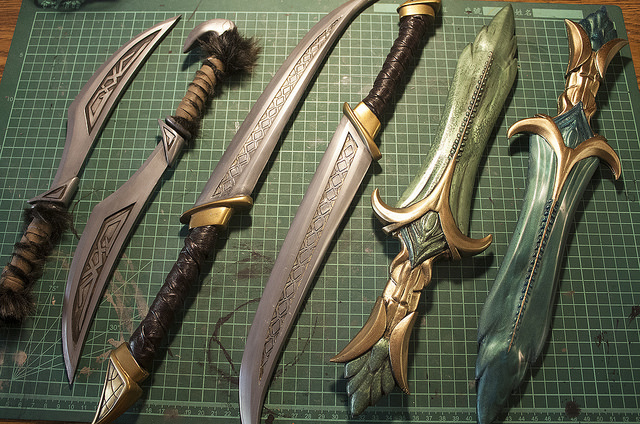 Combat is a mix of frost spells (because she was born in a Nord populated city), defensive block and quick melee attacks with a poisoned and enchanted dagger. "But this is a no crafting build?"...that's right but you still rely heavily on potions, poisons and enchantments! There are no perks for 1 handed and no sneak attack perks taken. You must use poisons and well-enchanted daggers to get enough damage to have a backup plan for when your magicka tank is empty.

The Thieves Guild will provide you with all of the daggers you need. When you join the guild 3 "Thief Cache" barrels will appear in Riften. By doing 5 "special jobs" in a hold capitol, given by Delvin and Vex, and doing the "special mission" for these cities you will find 3 Thief Caches in 4 more of the major cities of Skyrim.

Thief Caches contain great items to sell, arrows to give your followers and some remarkably enchanted daggers. Keep an assortment of daggers that will help you through any and every situation imaginable. A dagger that can banish your enemies' summons will be a life saver! 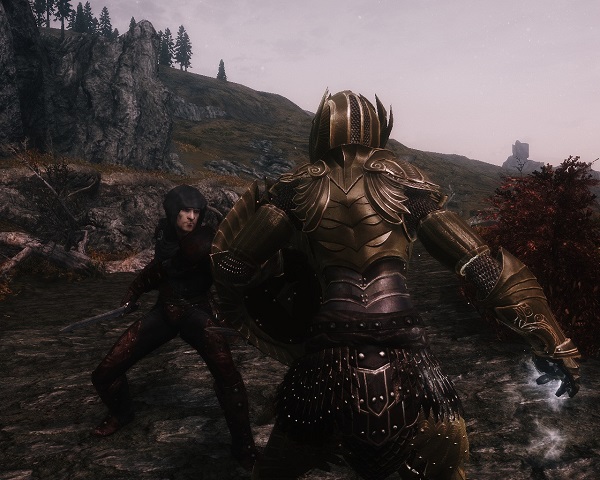 Reverse Engineering - This tactic uses your skills in the opposite order of usual combat. You start by raising your shield and rushing the enemy with Frost-enchanted Dagger drawn, tipped with a Weakness to Frost Poison. After poisoning the enemy your shield bash staggers him giving you room to back up and unleash a frost ridden fury!

Endurance - Take a sip of several potions and raise your shield, it is time to take on a boss! Fortify your health and magicka. Boost your AR and blocking ability. Add to your magicka and health regeneration. Increase your destructive firepower. Against a real badass you need all of the advantages you can get!

Playing this character was fairly straightforward. She was fed up with her position in life and wanted more. Greed and envy took over. She wants to become one of the rich/elite but will never be fitting for that lifestyle. The best she can hope for is to equal their wealth. She will never equal their standing in society.

" and lavish yourself. Wear the most expensive jewelry you can afford (with or without a good enchantment!). Buy or build the best houses you are able to and decorate them with the most expensive items. Nothing cheap in your house! Fill your house with jewels and adornments. Buy a stable of horses with a horse to ride for every day of the week. Carry a gold bar just to show your status.. Don't be classy, instead be flashy!

Tags: benc, sorry about the bad name it was all i could think, mage, rogue, altmer, rank:novice
Email me when people reply –
Follow