I've noticed in all of my builds (not to mention almost everyone elses) that you generally stick with 1 melee fighting style (if any) - weapon and shield, dual wield, or two-handed. Inspired by that, this build brings you back to Oblivion and Morrowind days - where you used whatever equipment you found instead of crafting all the best stuff. So I present: 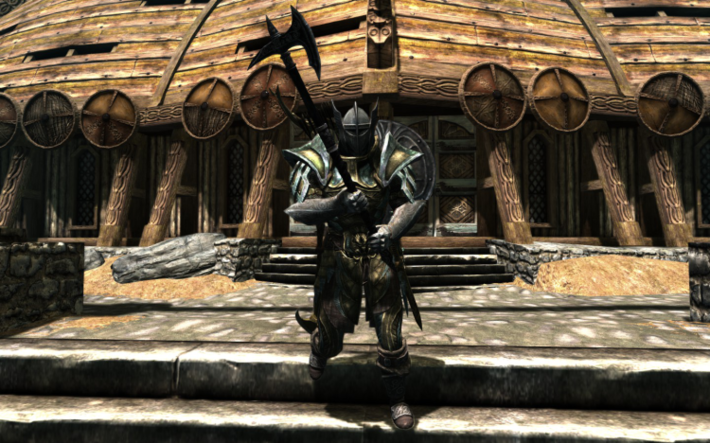 You'll probably look at the picture and say 'why is he wearing Glass Armor as well as Steel and Steel Plate?' When I made this build I wanted to create somebody who could use anything and everything they found, and still be effective in combat. The Veteran is just that; a warrior who has mastered every fighting style - dual wielding, two handed, weapon and shield, and archery. He's also capable of defending himself with all types of armor as well as blocking with both shield and weapon. While not as skilled as a master smith, he is able to improve equipment he finds, even if it is enchanted, though he lacks the skill to make his own.

With ability in any armor or weapon, he's able to overcome any enemy, and cater to all situations.

Race: It isn't restricted in any way by the roleplay or anything, but I chose Redguard. Other races with combat-based skill boosts and powers such as Nord and Orc would work well too.

Stone: Warrior or Lord. I much prefer Warrior given that it gives me a huge boost to 6 of 7 skills that are going to be perked. Lord works as well although it can be covered for with enchantments and such.

Stat Distribution: 3/0/2 in Health/Magicka/Stamina. The Veteran has no need of the arcane arts - all he needs is a hardy constitution and a good arm.

One-Handed:One of two main forms of attack. The Veteran can fight with either a shield or weapon in his left hand when using a one-handed weapon in his main hand. Due to using both swords and maces (see the Fighting Styles section), I prefer to avoid getting weapon-specific perks early on. Key perks include Fighting Stance and Dual Flurry.

Two-Handed:The other main form of attack. Battleaxes are the weapon of choice here, offering a perfect balance between speed and damage, with their Limbsplitter ability too good to pass up. The extra reach and damage from a battleaxe over a one-handed sword or mace is invaluable when fighting certain opponents, but the slow movement and attack speeds can be a hindrance against others. Key perks include Champion's Stance, Great Critical Charge, Sweep, and Limbsplitter.

Light and Heavy Armor:The Veteran is skilled in the use of all armor, selecting the pieces with the best enchantments. Key perks are Juggernaut and Agile Defender - since he is almost always wearing a mix of the two, very few of the other perks will work.

Archery: The Veteran can also function in ranged combat, though he isn't as effective as in melee. This is primarily a surprise/very long range skill, so don't forget to sneak to get the x2 bonus on the base damage. I don't really think it's worth 3 perks to get an extra 1x base damage on a sneak attack, so Sneak isn't perked. Key perks include Eagle Eye and Power Shot.

Block:The Veteran can deflect blows when using a shield or two-handed weapon. This gives him some much-needed protection against archers, and later mages and dragons. Key perks are just up to Elemental Protection.

Smithing:The Veteran can improve his equipment to make it more effective in combat. Arcane Blacksmith is very key since you will be using primarily enchanted gear. Something that's been very effective is only getting my Smithing to 65 - at this point materials you don't have the perk for can still be upgraded to Exquisite, only one step lower than weapons you do have the perk for at the same level. Only required perks are Steel and Arcane Smithing.

Weapons:As I mentioned earlier in the Skills section, the Veteran uses quite a variety of weapons. These are basically the best enchanted ones of each category you can find, though I'll list what I had at level 31:

As well as your main weapons used in fighting styles, I keep a few special enchanted daggers with high-cost effects - such as my paralysis and soul trap daggers. If I found them in loot/shops, I wouldve bought a Turn Undead and Banish one as well.

Armor/Jewelry: Basically whatever you can get your hands on. At level 31 I had:

As you can see I've got a well-rounded set of enchantments for my character, though you might be wondering why I'm using Glass armor when Steel Plate clearly has more armor rating. Something to take into account is the protection a piece of armor offers vs its weight. Steel Plate would be more effective, sure, but weighs a whopping 38 pounds. Glass armor only weighs just 7, and is almost as good.

In general you'll be earning alot of money if you played the same way I did (see down a bit). This let's you get choice equipment (usually) - I check blacksmiths and general stores every couple of days for new gear. Depending on your skill level/game difficulty you'll probably want to buy potions as well, since you have no way to self-heal.

I played my Veteran as a mercernary, something I'd never tried before. I used radiant quests to structure my playthrough, earning anywhere between 100 and 500 bonus gold for clearing out a dungeon/location. I accrued significantly more wealth than usual - a whopping 37k at level 31 even after buying tens of thousands of gold worth of equipment and a bit of training on top of that. On other characters I just wandered around mostly, but I felt like I really had a purpose on this guy. Basically never do a job unless there's something in it for you.

On the topic of Radiant quests, it's almost essential to complete the Companions questline, as it supplies you with a powerful shield (the Shield of Ysgramor) as well as an infinite supply of radiant quests. This was something I hadn't tried before, so it was quite interesting doing some of those - I think the escaped prisoner one is my favourite. Overall this style is more effective against foes with no ranged attacks, short reach, slow attack and movement speeds, or simply a low damage output. It's also the best style for fighting groups of enemies.

Requires Great Critical Charge. When fighting groups of weaker enemies, it's possible to simply sprint around the battlefield, felling each of them with a single power attack. Even if the attack doesn't kill them outright, they'll be staggered and bleeding, most likely killing them in the next few seconds. 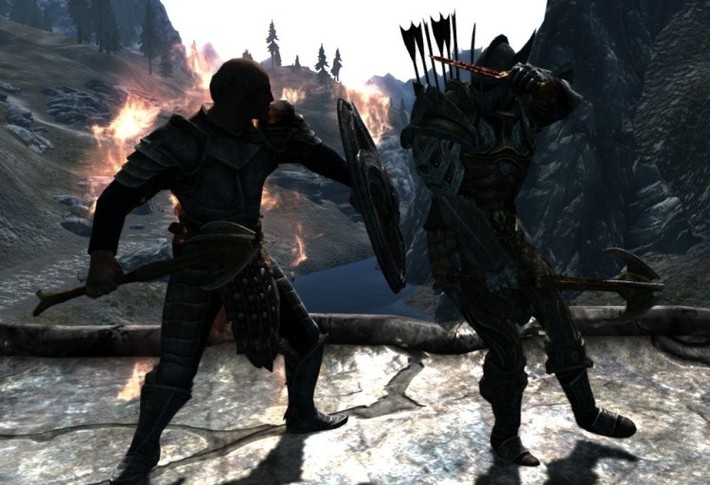 This style is more oriented towards taking down single, tougher opponents who block alot. Spamming the dual power attack will take down a Bandit Chief in a matter of seconds, quicker if you're using Fire enchantments on your dagger and mace - the damage over time effects stack. The first hit from your mace breaks the block and staggers them, allowing the other strikes to hit home unhindered. The dual-wield power attacks are particularly fast with a dagger in the offhand, as the speed of the attack is based on the offhand weapon's speed. Alternatively you could use an unenchanted dagger in your offhand for Elemental Fury.

Simply activate Adrenaline Rush and dual power attack away. The incredible Stamina regen rate granted by this ability allows you to spam power attacks for an entire minute, making this ability particularly effective against dragons.

The Implacable Defense style should only be used against particularly hard-hitting enemies (such as people using 2-handed weapons), dragons and mages. You're effective at interrupting attacks before they even strike home, and the added resistance for using a shield negates much damage even if it does. Once you unlock Elemental Protection this style makes you incredibly resilient to magic attacks.

Aside from these 3 melee styles, you should also make using of ranged weapons (bows or crossbows - personal preference) to attack enemies from range, weakening them before the enter melee range. The key to the Veteran's effectiveness is knowing what time to use certain combat styles - as demonstrated in my video below.

Well, let me know what you think in the comments!