Hey guys, welcome to my Contest Build for the Pirate Event. For a change, I wanted to stick to a cliche which surprisingly is hardly touched, as well as looting (and improving the chance to find more), gold in chests, urns, pockets etc. Instead of just madly looting everything. Onto the Build shall we... 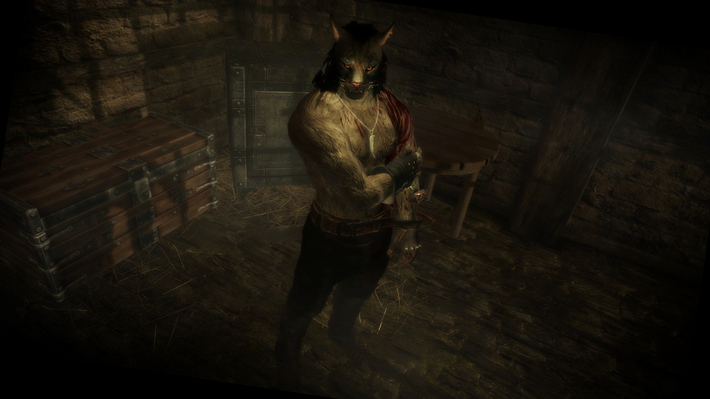 That sly dog.
All I wanted was out of piracy and the Blood Horkers.
Guess Haldyn didn’t like that idea.
They snuck up on the Slinky Horker in a mist - Haldyn’s little magic trick.
This time though, it was different. No hostages, no robbery, no nothing.
Didn’t even try to kill me - just in and out.
They sunk the ship - with me in it.
Trying to make sure I don’t comeback I guess.
Guess you don’t really leave pirate life.
Well, you know what they say, you mess with the Khajiit and you get the claws.

Ordinator: This mod is essential, once again to this Build, as it vastly opens up several pathways and options but this Build is playable without it.

Andromeda Standing Stones: Essential as it vastly overhauls every single Standing Stone and has synergy used in Imperious - in the Build.

Imperious: Combined with Andromeda, Imperious is the bread and butter of this Build and it’s gameplay.

TK Dodge: Not essential at all, but I highly recommend it, as I envisioned the Cutthroat (although temporary ‘retired’), an agile fighter - works wonders with combat mods.

Honed Metal: Not essential per say, but I highly recommend it. Allows you to get your Nordic Carved Sword (or any particular sword that you prefer), Early Game and tempered without having to rely on random drops.

For the Cutthroat, I wanted to focus on two major things - one of which Khajiit are quite well known for - which just so happens to be included under the Khajiit race in Imperious and Andromeda. Speed, both in and out of combat and being pickpockets (translated into the Skills).

Starting off as a Khajiit with Imperious (for those curious) will start off with,

Feline Agility: Move faster, and sprint much faster at the cost of more Stamina

Stone: Shadow or the Thief

Also to improve our speed in combat, the Shadow Stone from Andromeda comes to mind. As does the Thief, whichever you choose is your choice. I personally stuck with the Shadow for the nice movement speed.

Blur: The Shadow increases movement speed by 20%, in combat
Hide in Shadows: When near a wall or obstacle, sneaking and sneak attacks are 20% more effective.

Shadow Step: At will - Exped 50 points of Stamina to dash to a nearby target with 75 feet

Pillage: Once a day - Find more loot on enemies you kill within 30 seconds. Especially violent kills result in even more loot

For the Cutthroat, Magicka is worthless. I stopped putting points in Stamina once I hit about 200, adding the rest to Health. Feel free to change it, to your playthrough.

For the Cutthroat, quest wise, like the roleplay, it’s fairly simple and open to the player. The quests that I recommend are the Thieves Guild which is perfect for training our skills - feel free to go as far into the questline as you wish, Rise in the East which is perfect for taking revenge on the Blood Horkers and more importantly Halydn - and Bounty Quests is purely for gold and optional.

-Rogue’s Parry: When wielding a one-handed weapon and an empty other hand, attacking with the weapon while the opponent is winding up their attack or drawing a bow deals 40% more damage and delivers a critical strike.

-Thundering Blow: Whenever you perform a total of 8 or more one-handed regular attacks in combat, your next one-handed power attack is a Thundering Blow that deals double damage and costs no Stamina, resetting the counter.

-Aftershock: After a Thundering Blow, attack speed is increased by 75% for 3 seconds.

-Wandering Warrior: Whenever you defeat at least 4 humanoids and/or animals in a single battle, you gain a permanent +1% bonus to one-handed damage. This effect stacks up to +20%.

-Dynamic Entry: Performing a silent roll increases your weapon damage by 40% and unarmed damage by 40 points for 3 seconds.

-Clean Escape: When you stand still for 8 seconds while sneaking, enemies within 150 feet no longer search for you.

-Blood Money: You find 10-100 more gold when looting humanoid corpses slain in an especially violent fashion (with an attack that deals at least 100 more damage than their remaining Health or a killmove)

-Lawless World: Petty crimes are forgotten, allowing your bounties for non-violent crimes to decay at the rate of 50% if your Pickpocket Skill each day

-Thief’s Luck: You may choose an item type (gold, jewelry, books, ingredients, potions, ingots, scrolls). Those illuminated by Thief’s Eye are three times more likely to carry items of your selected type over other item types.


-Doomed to Plunder: Killing a victim in possession of the Death’s Emperor grants 100-300 more gold.

-Quick Reflexes: Time slows down if you are blocking during an enemy's power attack.

-Power Bash: Able to do a power bash by holding down Attack while blocking. 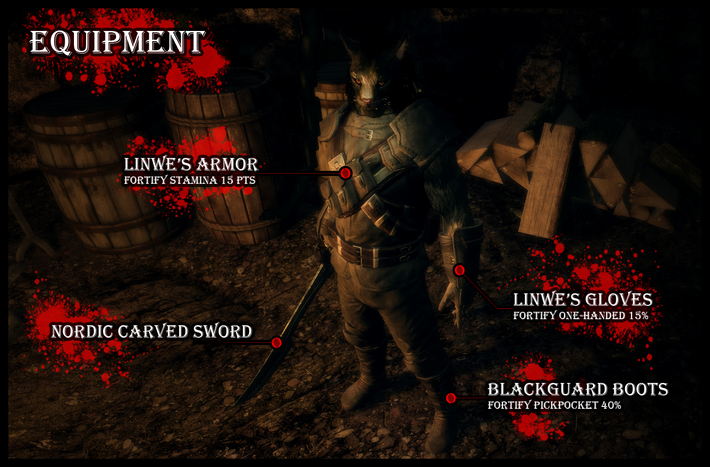 For once in my Builds, combat came rather simple (especially with TK Dodge) - hit hard, fast and dodge/stagger. Due to no Armor Skill, you end up with about 60 AR (give or take - depends on the Light Armor skill) at End Game. Meaning you cannot afford to get hit - especially on higher levels.

Using your wit - and let’s not forget Death’s Emperor - I recommend placing it on the toughest - if against melee opponents, place it on the opponent with the Two Handed weapon - and starting combat (either sneak attack or Overrun in Sneak Mode - a well known trick that I’ll explain at the end of this section) on the weakest or any other opponent in a group/two or more enemies. I did this to leave the strongest to be taken out in one hit - due to Death’s Emperor which increases your damage by 200% on the holder of the coin (including Critical Attacks) - whereas others may require more of your attention.

If an enemy is alone, you can place Death’s Emperor for Doomed to Plunder, or you can simply initiate a power attack.

However, Mages are not so easily defeated. Similar to the above tactic - I can not stress enough to put Death’s Emperor in the strongest Mage in the group and singling them out. This is due to having no Magic Resistance, meaning that you will take the full brunt of any and all spells. Even if a Mage is alone, I still recommend Death’s Emperor due to no Magic Resistance whatsoever.

NOTE: For those who do not know, you are able to initiate a Critical Charge (perk name in Vanilla, in Ordinator it’s Overrun), after doing a Silent Roll. The result,  at the end of the Silent Roll - if done correctly - changes the animation to the Critical Charge while doing the addition damage (see Overrun above). Using this trick in Ordinator with the addition of Dynamic Entry creates a rather powerful first attack that can either instantly kill (either from the hit itself or the ‘secondary’ effect of Overrun) or serious damage the target - provided you hit the target. I roleplayed the Cutthroat as a thief/pickpocket first, and a tactician second. I also decided to keep the Roleplay rather open to the Player. Before taking on Haldyn, I focused on gathering as much gold as possible (what you decide to do with it is up to you - I chose to take up training to help speed up One Handed as it gets left behind by Pickpocket).

After exacting revenge on Haldyn and the Blood Horkers, what you choose to do is your choice. Do you create a Pirate Crew to loot and pillage Skyrim? Do you decide to become a Privateer for the East Empire Company after taking out Haldyn - the choice is entirely up to you.

As the Cutthroat, both before and after Haldyn, I focused on robbing civilians - both rich and poor - blind of their gold. Not their jewelry or weapons, just their gold. I recommend focusing on pickpocketing only gold for two reasons: as a ex-retired Pirate wouldn’t exactly be able to sell their stolen items - especially one that was supposedly killed (hence not using Speech), another reason being, if an ex-retired Pirate found a merchant willing to buy stolen goods how much would they be both willing and able to pay for said items. -Chris Dionko, for giving me some ideas for the Cutthroat

-Furrion 17, for the images (found on Pinterest) as well as giving me some more ideas for the Cutthroat

-Curse, for holding the Sky Forge’s first ever Contest as well as the new screenshots, Perk Spread and Equipment Spread.