I’ve always wondered what it would look like if a true Nord of Skyrim sought out the curse of vampirism to gain the power to liberate Skyrim.  A sacrifice greater than death, to protect and forever watch over her home.  This is my attempt to bring that idea to life while using an underused aspect of Vampire Lord form: melee combat.  The result is a deadly combat archer who uses vampire lord form to become a powerful melee brute on the battlefield.  And through her use of powerful potions, the normally underwhelming Vampiric Drain spell becomes a deadly life draining force.  Without further ado, I present the Dark Defender. 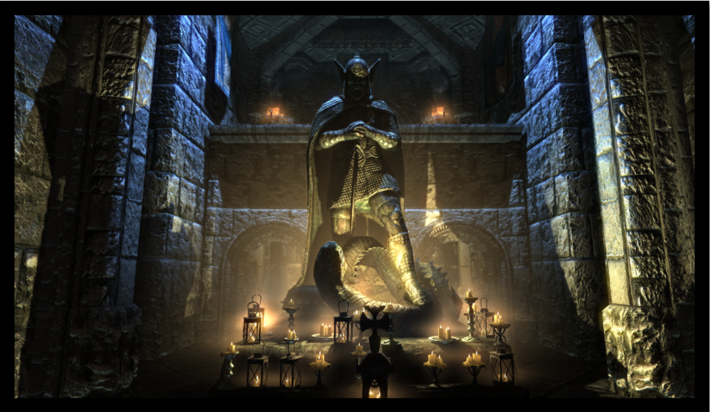 “True Nords of Skyrim worship almighty Talos and dream of meeting him one day in Sovngarde.  Under the order of their Thalmor masters, the Empire betrayed us by banning that worship.  No longer can I accept the rule of such an Empire for I have discovered the power to free my homeland.  It will cost me Sorngarde, but by my undeath, Skyrim shall be free.  Talos forgive me for sins I will commit.”

Race – Female Nord Vampire Lord: Nord is the only proper choice for roleplaying reasons and females look best in the gear used.

Attributes – All Health: With only moderate armor in both human and vampire lord form, a large health pool is needed to keep the Defender alive in the center of battle.  This makes the Defender feel like a true tank in battle.  Magicka and stamina needs are addressed through the use of gear and potions.

Stone – Lady Stone: The Dark Defender relies heavily on regeneration in her vampire lord form making this the best choice.  I waited to take this until after I took the Necromage perk and I also took a Fortify Restoration potion before picking it up to further enhance the bonus.  This helps boost the builds power without being game breaking.

Alignment – Chaotic Neutral: The Dark Defender fully embraces the philosophy “the ends justify the means.”  If an action can protect Skyrim or enhance her powers to protect Skyrim, she will do it regardless of consequence or how society views the morality of her actions.

Archery – The core of the Dark Defender’s arsenal is her bow.  Early game, this is her primary form of damage.  But even as her powers expand, archery remains a staple or her offense.

Alchemy – This skill provides the foundation of the Dark Defender’s power.  She has learned to carefully brew alchemic concoctions to enhance her power in all forms of combat.

Destruction – Only taken for the Dual Casting perk required for a powerful combo explained later. 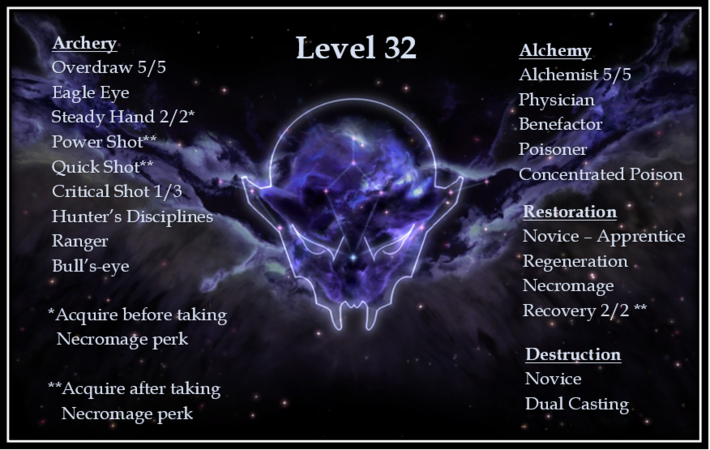 Head – Krosis:  Looks great paired with orcish armor and also vides us +20% to Archery and Alchemy

Body – Orcish Armor: A set can be stolen from the Malacath shrine at Largashbur.

The Dark Defender has 3 unique playstyles allowing her to excel at all ranges against all enemies.  One key aspect of all playstyles is aggression.  The Dark Defender always elects to charge into battle and rely on her massive health pool and decimating her foes to keep alive.

Used from the very beginning of the game, this playstyle is pretty straight forward but grows in power throughout the playthrough.  Unlike normal archers, the Dark Defender charges into groups of enemies.  Combining the drastic speed boost from the Necromage/Quickshot perks and a fast bow like the Galduur’s Blackbow, allows the Dark Defender to rain arrows down on her enemies with lightning speed.  Enemies who come too close are staggered with the Glitched Drain Vitality shout or bashed with your bow.  If you do get low on heal, a couple cast of Fast Healing will bring you back up to continue the fight.  When facing living enemies, make strong use of poison to swiftly conquer your foes. 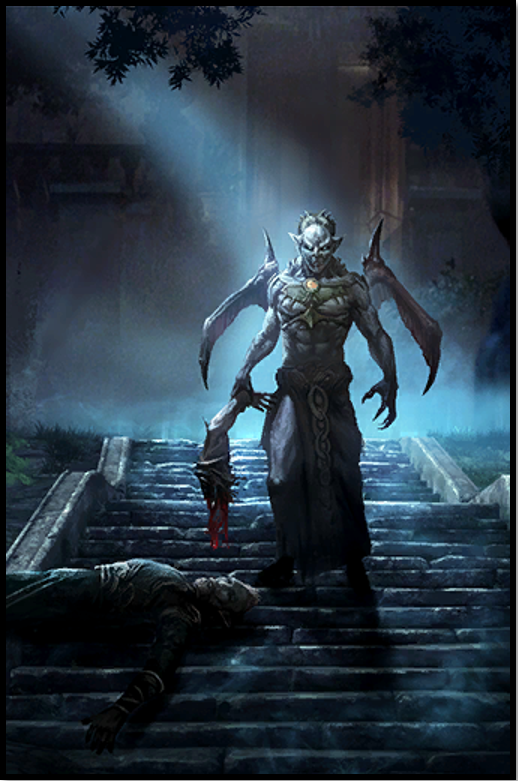 I had never used melee as a vampire lord before and boy I was missing out.  Not only do vampire lords have pretty solid melee damage, their abilities add a lot of depth to gameplay.  Before switching to Vampire Lord form, put on the Ring of the Beast and the Amulet of Bats and chug a Blood of the Berserker potion.  The Ring of the Beast gives a nice health and unarmed damage bonus and the Amulet of Bats adds an absorb health effect to your Night Cloak.  The real key is that the potion effects carry over into vampire lord form.  This means for 7.5 minutes you have massively boost health regen and since Fortify Marksman boost all damage, you have massively boosted unarmed damage for 90 seconds.  Even when the Marksman potion bonus wears off, you have pretty good damage and enough health and health regen to really tank.  With just under 900 health in Vampire Lord form, I was getting almost 20 health regen per second plus the absorb from Night Cloak.

Once transformed, you will switch between magic stance (floating) to use Vampiric Grip as crowd control and melee stance, which is your main source of damage.  Constantly monitor the battlefield, throw around your enemies and play aggressive.  Putting everything into health makes you a tank so charge in and go toe to toe with the battle-axe wielding bandit chief because he will lose!

This playstyle was an accidental discovery that fits this build so perfectly you would think it's intentional.  This playstyle centers around casting Flame Cloak and then using Vampiric Drain to rapidly drain your enemies of their lifeforce.  While normally, these spells are rather weak on their own, combining both of them together and adding alchemy on top makes them deadly.  I was taking out high level bandits on Master difficulty with this.  The mechanics are: using a 120% Fortify destruction potion (which as a Necromage vampire will be 150%) will increase damage of Vampiric Drain to 12.5 and Flame Cloak to 20.  Unfortunately, dual casting these spells individually doesn’t increase their damage, but dual casting a spell while Flame Cloak is active causes Flame Cloak’s damage to be affected like its being dual cast.  So dual casting Vampiric Drain increases the dps of Flame Cloak to roughly 44 while allowing you to absorb 25 health per second on top of normal healing.  That’s a total of 69 dps while healing over 25 health per second!  Combine this with the Blood of the Ancients power causing Vampiric Drain to also absorb health and magicka and the results if this only cost about 14 magicka per second.  All of this requires no level-up investments in magicka and only a Destruction skill of 20!  To make this happen, make sure your wearing the Ring of Erudite for its magicka bonus, chug a Vampiric Boon potion and a Blood of Magnus potion and have the Blood of the Ancients power active.  These will fortify your magicka, magicka regen, health and destruction damage for 90 seconds.  Cast Flame Cloak, dual cast Vampiric Drain and watch your enemies literally melt before your eyes. 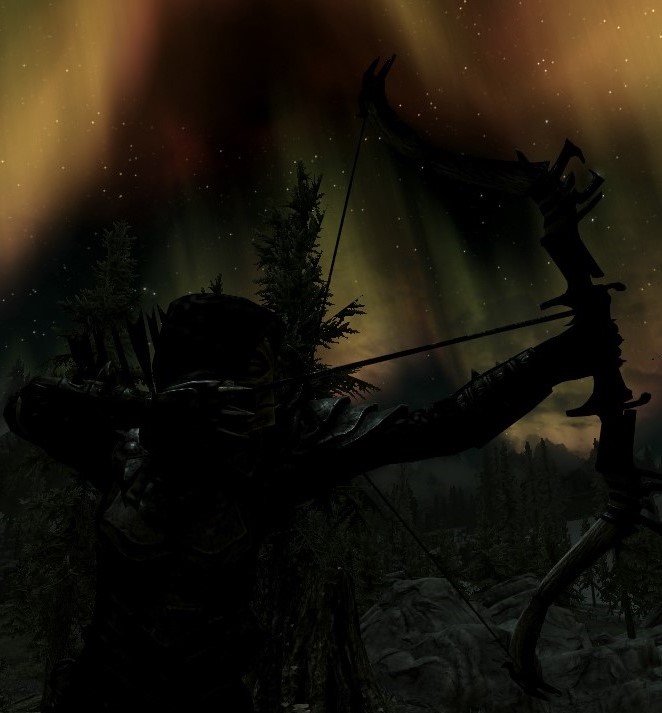 The requirements of each playstyle naturally split up leveling and when new playstyles are added.  Early game the focus is entirely combat archery.  This matches roleplaying perfectly as you are simply a stormcloak soldier with no special abilities.  Once you seek out vampirism, you will begin training/power leveling restoration for the necromage perk to simulate the study of your new powers.  Additionally, you will work on gaining perks for the vampire lord perk tree.  This felt like a very natural evolution and like it took time to master your new vampiric powers.  Once the necromage perk has been taken and you have all the vampire lord perks,  your focus will shift to leveling your alchemy skill.  This will round out your kit and ultimately introduce the Vampiric Mage playstyle.  While not required, you can make use of Faendal in Riverwood to "kickstart" the combat archery portion of the build.  I elected to do this and it made it easier to roleplay I was a stormcloak archer early game.

Early game you are a simple stormcloak archer.  During this time you will act as an honorbound soldier.  When Harkon offers you his blood, you see they power to free your homeland.  That is the moment you adopt the attitude that "the ends justify the means."  You have abandoned honor for power and so can justify any action if it will lead to Skyrim’s freedom and the protection of your homeland.  Joining the Dark Brotherhood is a perfect example of this.  Any innocent you have to kill to be able to ultimately kill the Emperor is justified.  You don’t kill innocents mindlessly, but if it will save help Skyrim, you show no mercy.

Another important aspect of roleplaying it to buy Windstad Manor.  Not only does this serve the important function of letting you grow the ingredients for all your potions and poisons, but it also allows you to establish you own private residence in Skyrim.  Your choice to become a vampire has ostracized you from society and while you appreciate the power you have received from vampirism; you do not wish to keep the company of other vampires interested in nothing more than their conniving plots.  Additionally, you only associated with the Dark Brotherhood for the purpose of assassinating the Emperor and once that is complete, you have no reason to stay. 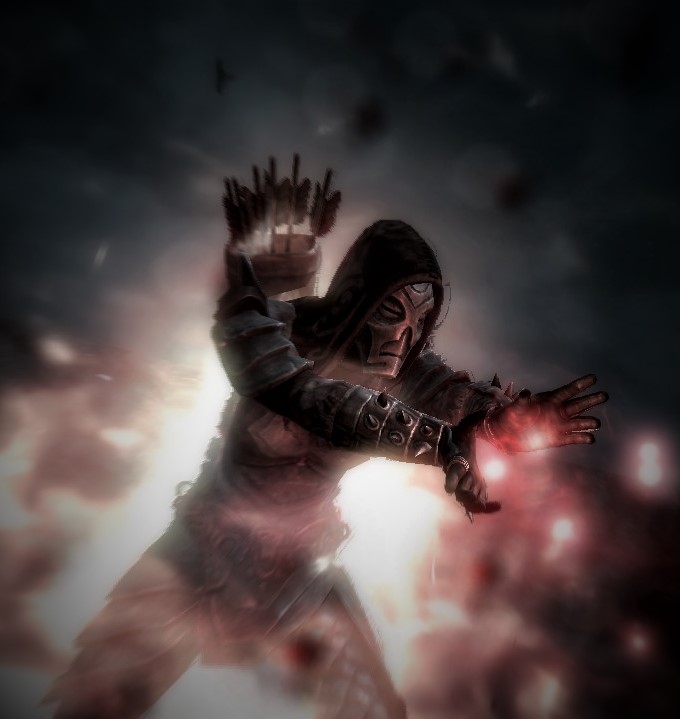 Main Quest – For Skyrim, Alduin, the world eater, must be vanquished

Dawnguard (Volkihar side) – So Skyrim may be free, I will embrace the darkness

Dark Brotherhood – The Emperor must die

This has been a very fun build to work on and play.  Originally, I had tried including several other skills and after some trial and error I found stripping it down to the core components made for a much more enjoyable experience.  I would like to do a quick shoutout to “The Nightguard” by Ponty and “The Bloodclaw” by Tae-Rai, Teccam and SkallyV.  I took a lot of inspiration from both of these incredible builds.  Hope you have enjoyed the build.