Greetings and bienvenue, my dear reader(s). Welcome to my entry for the Bloodlines contest. Inspired by a certain real life historical figure, welcome to a dark avenger, a bloodthirsty relic of days long past, seeking to reunite with his lost love, and crush the remnants of the Dragon Cult, welcome to the tale of… 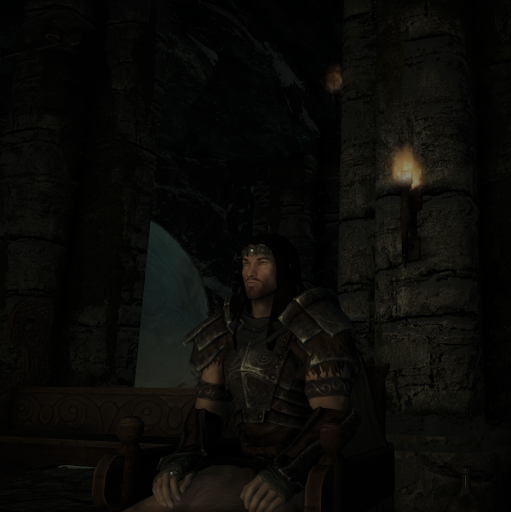 I was raised in chains...

When the Night of Tears descended upon Saarthall and the neighboring villages, not many of us were so lucky as to die or flee back to Atmora. Many, like myself, were made lesser servants or slave soldiers for the Falmer as they warred with the few holdouts of Man that had stayed behind to allow the fleet to escape, alongside themselves. When news came of Ysgramor's return, we struck. Alongside Camarilla Bloodskall, the maiden who would eventually be my beloved, we staged an uprising. When Ysgramor and his Five Hundred conquered Skyrim, I was giving lordship over my deceased father's fiefdom, and Camarilla was made a priestess of the Dragon Cult. 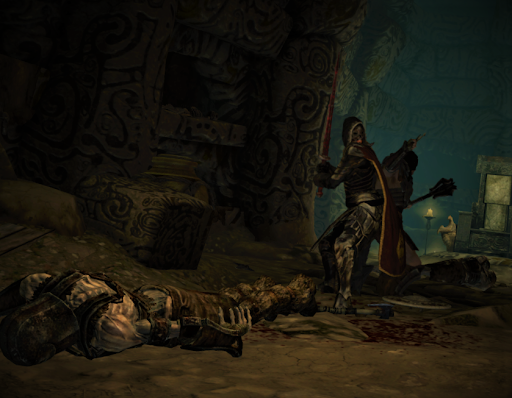 But peace is not eternal…

For a few years, things looked bright. I became the harsh, but fair lord of my village, impaling heinous criminals upon spikes,so much so my enemies called me Drottinn Teapa, or Lord Impaler in the modern tongue, and Camarilla became one of the High Dragon Priests, her brother, who had taken up the mantle of Vahlok, had granted her the mask and moniker Konahrik. Camarilla had learned the power of blood, and taught it to me and her Bloodguard, her personal honor guard. Even all these centuries later, I recall the day we Embraced each other, becoming two among the night’s kin. But slowly, the Cult changed, more capricious and cruel. Carmarrilla and the more level headed priests tried to reign them in. But eventually, war between Men and Dov ranged. Armed with my family’s sword-spear, Bluddgeirr, and my own personal arms, I stood beside my sweetling. But eventually, we were laid low, and brought before the sneering council of Dragon Priests…. 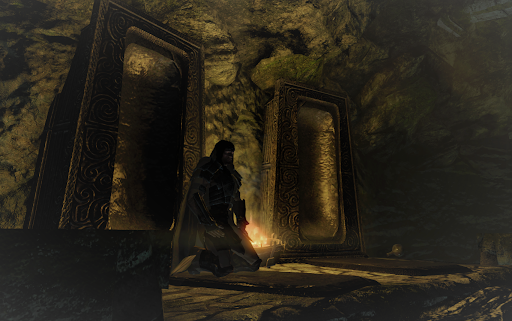 An undeath of revengeance…

We were tortured for hours. I can still hear Gudrun, or Otar as she was known as, her shrill laughter as her shock magics ripped at our flesh. I remember as Hevnoraak, or Sigismund as I knew him, leering over us, enchanted blades in hand. His serpentine voice taunted us, about how these blades, in their own way, would keep us from death. Camarilla would have her soul reincarnated in a new form, and I would be in stasis. I did not know how long I laid in my tomb, until the blade was pulled from me, and my undead heart began beating anew. I set off to find Camarilla, and to butcher the now lich Dragon Priests…..

Well, that was certainly fun to write. Starcrossed vampiric lovers, seeking to meet each other anew, and also an excuse for me to REALLY hunt down and slay all the main Dragon Priests, who I RPed as the ones who struck down The Lord Impaler and Camarilla, who I decided would be reborn as Mjoll. With that out of the way, let's get into the nitty gritty. 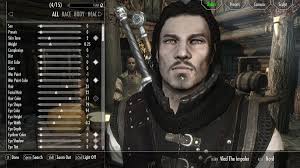 Race: If the backstory didn’t make it obvious, Atmoran (AKA Nord) Vampire. Not only does Battlecry work for breathing room, but so do the skill bonuses, +10 to Two-Handed, and +5 to One-Handed, and Speech.

Standing Stone: The Warrior or the Mage to start with for leveling purposes, then once your skills have leveled well, swap to the Lady, for added regen during the daylight

Sacrosanct-This wonderful vampire overhaul by Enai, in my mind, makes vampires so much more fun to play as.a vamp.

Vampire Facial Reclamation-Hate the sunken face, or wrinkly bits added by Vanilla Vampires? WIth this little mod, now you can keep your living visage even when the grip of undeath claims you.

Volkihar Knight-Vampire Armor-Adds both craftable and pre-enchanted heavy and light armor sets. While using primarily Vanilla assets, they are melded together to make rather impressive vampire armor.

Gameplay as the Lord Impaler was a fun chimeric fusion between a blood sorcerer, a Sword-and-Truncheon DPS beast, and a two-handed sword-sweeper.

Combat will start from ranged. Pop fear spells onto as many enemies as you can. This not only clears out any backup tougher foes like Bandit Chiefs and whatnot may have, but doubles the fun of chasing them down. Next, focus on the big hitters. While mages, particularly flame based mages, and archers do pose some threat, your fairly decent armor rating, combined with your Magic Resistance and the occasional flesh spell, will help mitigate. They can be dealt with via a mixture of tanking shots, and either Whirlwind Sprint, or Become Ethereal.

If I felt an urge to impale someone at range, and or level my Alteration, here’s what I’d do. I stockpiled Riekling Spears. Then, say I have a Bandit Outlaw in front of me. I would first off, Marked for Death him to weaken him. Then, hit him with a few Ice Spears or the like to both slow him, and chip their health down even more. I would then proceed to drop and then hurl Riekling Spears at him, this both A. Levels up Alteration fairly well, but also B. Is just oddly amusing murdering someone by launching weaponry at foes like a Nordic Gilgamesh.

Now, for the two-handers, I used a mixture of fire damage, for the damage over time, particularly as Aspect of Terror and Necromage, interestingly do boost it, and frost spells, for their slow effect.When I ran low on Magicka, I utilized a mixture of Equilibrium to top up my Magicka bar, and premade Fortify Destruction potion buffed Vampiric Drain to top up my Health. While his fellow Nords and Vampires do have 50/100% frost resistance, that does not affect the slow effect. When they got within range, I equipped Sangeflacara and Schilodi, and activated Slow Time, and began to dual power attack the heavy hitters. Once they were done with, and the lesser foes started creeping back, it was Bluddgeir (Blood-Spear) time.

Now, for those of you who don’t know, dual casting Equilibrium, while it will boost the amount of Magicka gained, will also increase the health drained, Necromage doing even moreso. This also counts towards dual casting any healing spell.

Using the Sweep perk against multiple foes allowed for nice multi attacks, while also allowing me to keep my help topped up. Mjoll/Camarilla using the Bloodskal Blade added in both long and close ranged support.

To boost Slow Time, Courage/Fear spells, and Vampire Drain, I recommend stockpiling any found/bought Fortify Alteration, Illusion, or Destruction potions you come across in your travels.

Against dragons, it was fairly simple. Before getting Dragonrend, I simply used trees, buildings, any cover really if it was a fire based drake, and would pelt them with the element they were weak too, while Camarilla provided support.

Now, some may ask why, of all followers, I picked Mjoll the Lioness to be The Lord Impaler’s reincarnated beloved? A few reasons; first she is essential so she can never accidentally die, two is that she is an all around tank of a follower, and three, she has bonuses in Heavy Armor, Two-Handed, and Block, perfect! Alongside Konahrik and the Bloodskal Blade, I gave dear Camarilla a set of Ebony Armor, Ebony Gauntlets, and Ebony Boots. As an added note, I chose not to kit her out in the full gear until I had both Konahrik and the Bloodskal Blade, which I roleplayed as the items triggering her repressed memories of her past life.

Note, followers, unlike the player, are only affected by a certain set of enchantments. They are:

Also, quest wise, before dealing with Alduin, Harkon, Ancano,  or any other threats, as per the Lord Impaler’s almost Captain Ahab/Khan Noonian Singh esque vengeance drive, will be too seek out the other dragon priests, whether it was for their cruelty and what they did to him, Camarilla, and their comrades (IE Hevnoraak, Otar, Rahgot, which also allowed me to get the Ancient Nord Armor, my main armor for the first half of the playthrough, primarily the mainland Dragon Priests), or to free them from their torturous undead, (IE Vahlok, Ahzidal, etc), to grab both Konahrik and the Bloodskal Blade. Ergo, quests like Evil in Waiting, Siege of the Dragon Cult, a Scroll for Anska, and  the like are your top priority. I personally didn’t take them on in any particular order, save for starting with Rahgot. Have fun Dragon Priest Hunting! 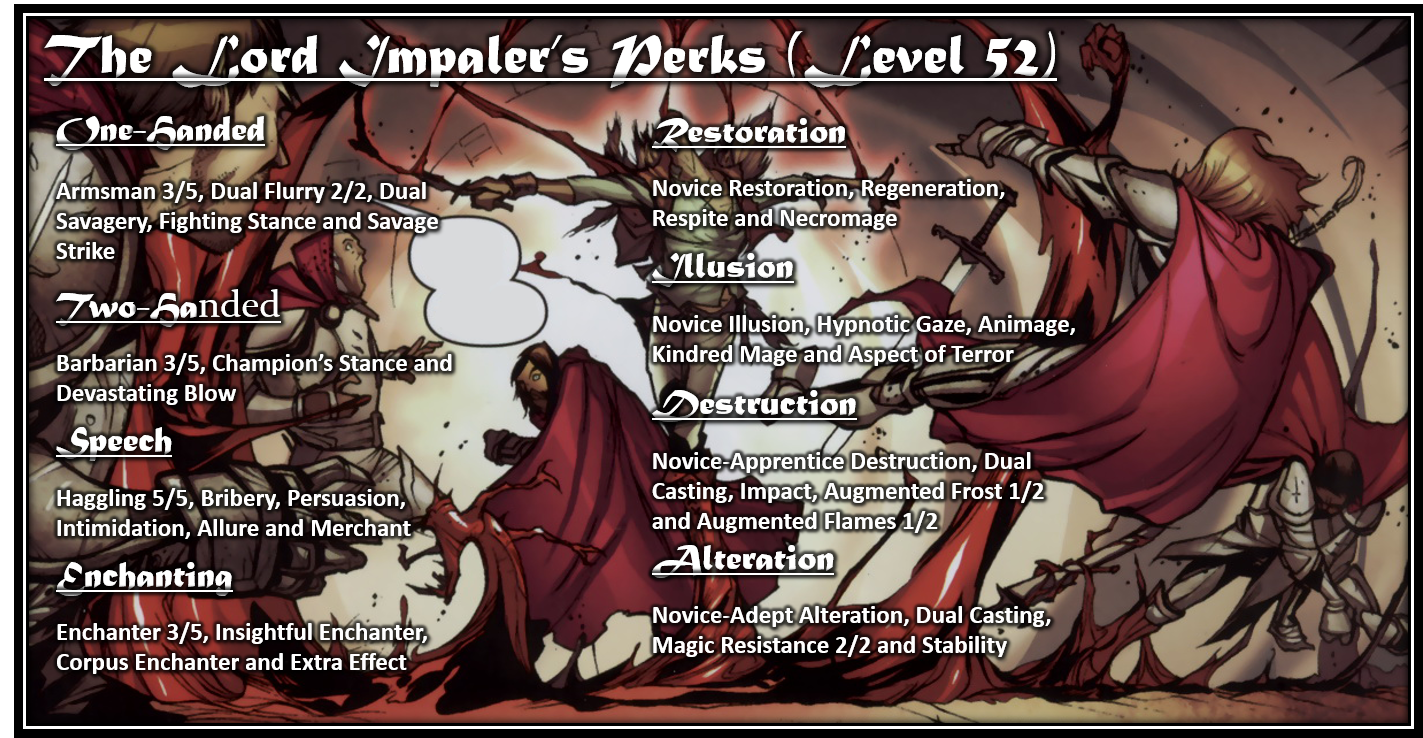 One-Handed: Whether dual wielding, smashing skulls, slicing throats, or acting as a spellsword, the relative swiftness of one-handed weapons allows the Lord Impaler to quickly cut down his foes.

Two-Handed: While being slower, relatively speaking, to its one-handed brother, a greatsword is, barring exceptions like the Longhammer, the fastest swinging type of two-hander. Not only does its length allow you to slash and stab at your foes from further range, but Sweep allows you to hit, and drain, health from multiple foes. Plus, the kill-cam where you lift your skewered opponent up by your greatsword is just perfect.

Speech-What ruler, or former ruler in this case, of a land doesn’t have a bit of a gift for diplomacy. Alongside the Merchant perk to help with training, the Persuasion and Intimidation options, while relatively few and far between, help you feel like an affalable, yet still terrifying,vamp

Enchanting-Tutored in the art of soulsmithing by his family’s Clever Man, the Lord Impaler skillfully weaves the anima of his foes into his arms and armor.

Restoration-While no cleric, the Lord Impaler knows how to manipulate bodily energies to stitch up his wounds and those of his beloved.

Illusion-In life, the Lord Impaler inspired equal parts awe and fear to allies and enemies alike, in undeath, his sheer presence strikes terror into those he combats, and those at his side are filled with a desire to fight on.

Destruction-Whether causing his opponent’s blood to boil to the point they combust from the inside out, or impaling them upon chilling stakes of ice, the Lord Impaler is not defenseless at ranged.

Alteration-Whether upping his AR a tad with flesh spells, slinging spears with Telekinesis, bolstering his magicka with his own blood, Vladan is happy to alter reality to suit his whims. 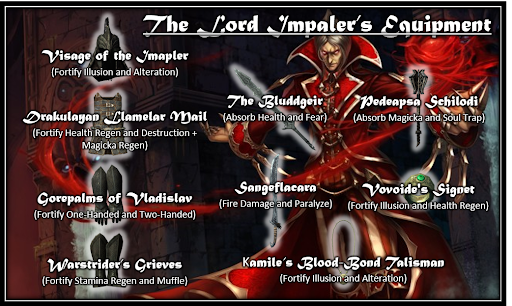 *Prior to obtaining this gear, I utilized the Ancient Nord armor from Forelhost, as well as the Helm of Yngol from Yngol’s Barrow Kazikli Bey-As one who impaled his foes, both on stakes to ward off would-be conquerors, as well as on his personal swordspear, Vladan is able to rapidly summon forth freezing spikes to skewer his opponents.

Bloodbondage-Through years of study with his dear Carmarilla, and on his own, Vladan learned how to bind a foe’s blood, channeling it through him, healing both his wounds, and fueling his arcane reserves. 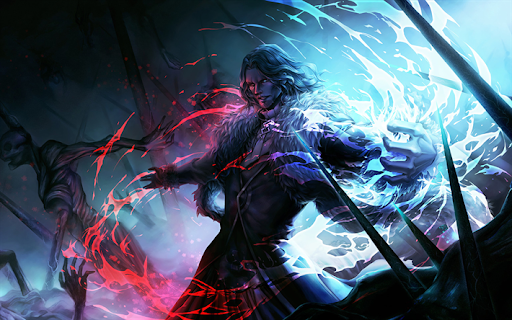 Whoo this has been a decently long time coming. I’ve toyed with remaking Vlad the Impaler/Vlad the III, voivode of Wallachia for a fair few years now. Thanks to Deebs for the spreads, and Furrion for the kickass screenshots, and, of course, you, my dear reader, for taking your time to read my entry for Bloodlines. Have a happy, and spooky Halloween….