After hours of playing Skyrim it occurs to me that I've played plenty of vampires but have never played a werewolf before. So I was delighted to jump into this contest and finally give these puppies a try. I assume most people are going to make vampires so this is how I'll stand out!  The Unleashed is your typical conman and thief who made the mistake of robbing a Daedric Prince of their artifact. Now he's cursed with transformations that happen at random and there's no telling when or where they'll come. So go about your thieving and your sneaking, but when the blood calls there's no refusing. And so ladies, gentlemen, blood suckers, and fleabags, I present to you ...

"The ring. It all started with that damned ring...Could've left that prisoner well enough along but I just couldn't resist. Thought I swindled that sod out of his last posession, but guess it was me who got swindled. Now there's something stirrin' in me and I cant control it....

NO! Not this time! Not now!

The Unleashed for all intents and purposes and just your run of the mill thief. But what sends this thief apart from others is the curse he must suffer for crossing Hircine. At random times you'll transform into a werewolf. You wont know when, you wont know where. All you know is it'll happen at the worst possible times like the middle of a delicate heist or in the middle of a city. Always ask yourself "What if it happens here?" Sneak: Any thief worth anything can sneak. Take the right side of the tree up to Deadly Aim. Take the left side up to Silence.

One Handed: A thief is always armed with his trusty dagger in case things go ary. If you dont like daggers swords work too.

Archery: Sometimes its best to address threats from afar. Take every perk but Bullseye. I feel like that perk can be a bit OP. You will spend alot of time in the wilds to avoid transforming in cities. With your bow you can hunt game to eat.

Pickpocket: You need quick hands to make it as a thief. Take every perk up to Misdirection. In human form you're not very tough so stealing weapons will help your survival odds.

Lockpicking: You dont really NEED pickpocket per se, but it fits well with the build. Fast locking picking is crucial because again you never know when you'll change.

Speech: That silver tongue is what got you in this mess to begin with. Will help with lifting stolen goods at higher profit. Try not to eat the fence.

Werewolf: Get to Savage Feeding as fast as you can, after that, get the Totem of Terror perk. Take pretty much whatever you want after that. 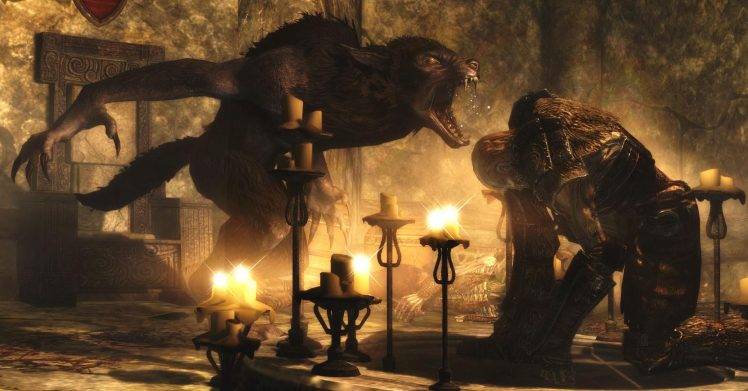 Transformed just in the nick of time

Its imperative that you do not ever complete Ill Met by Moonlight once you have the Cursed Ring. Make your ventures into cities as brief as possible so your transformations happen in the wilds rather than in cities. In dungeons you'll want to remain stealthy. Without crafting skills this build never got to be too strong, which is fine because most of the hard hitting comes from werewolf form. If and when the beast emerges its time to cut loose and go on a rampage. You'll be happy when it happens when your back is to the wall. You'll hate it when the beast calls while you've got your hand wrist deep in pockets.

Before his hubris got the better of him, the unleashed was already a terrible person. You could see this curse as just desserts. He will still continue on with his life of thievery thinking he can perhaps control the curse with enough help. Which is his motive for joining the various factions.

Thieves Guild: "Every thief in skyrim worth a damn is part of the thieves guild."

The Companions: These transformations cant be controlled. I've heard rumors the Companions inner circle may be werewolves themselves."

College of Winterhold: "Heard about those mages up in the college. Maybe they have an answer"

The Dark Brotherhood: "If the beast cant be controlled, maybe it can be sated. Just point me in the direction of prey and let me loose"

And there you have it ladies and gents, I hope you enjoyed this build. Be nice in the comments since its my first build. Wish me luck in the contest.