Greetings, my fellow Skyrimmers, to my latest build. One thing I love about Crossworlds is how it, in my mind, challenges builders. One has to work to make a character, organization, concept, etc, from one work of fiction into Skyrim. Anyway, welcome to an unconventional punch mage/barbarian hybrid. Welcome to….

Here I am, in chains again. Been in ‘em as long as I can remember. Growing up in the slums of Daggerfall, you gotta do what you must to survive. Lived by wits and a bit of Luck. Ran with a smuggling crew, till I met him. He was an Altmer, Kellion was his name.

He explained to me that my Luck was a result of me being an Angamancer. Never heard of it? Most wouldn’t have, not many of us. Unlike most, we can’t absorb Magicka from Aetherius. Rather, we take it from the land, particularly from the various ores and metals, taking properties related to them.

Kellion took me in, trained me. A few weeks back, however, he vanished while investigating some odd goings on in Skyrim. I followed in his footsteps, and well, found myself in irons once more…. Race: Breton. Not only does it fit with the backstory, but the innate 25% resistance to magic, and the Racial Power Dragonskin is good before you get the Ultimate Atronach. Alongside this, Bretons gain a +5 bonus to Alteration, Illusion, Restoration, and Speech.

Stat Spread: 0/1/3 in Magicka, Health, and Stamina. To achieve the Ultimate Atronach, we can’t put any points into Magicka. Cap Health at 170, and then you can put the rest into Stamina for power attacks, sprinting, etc.

Appearance: Short, black hair, hairstyle will be the same one as Ysolda. Make her pale, high cheekbones. Give her the thin eye scar.

Standing Stone: The Mage to start with for skill leveling, after that, swap to the Atronach. We’ll increase it to the Ultimate Atronach (More on that later).

Most find it odd I don’t wear shoes. Where I come from, good shoes were hard to come by. Plus, Kellion said, it helped. Well calloused and Flesh Spelled feet could be as good as any shoe, and made less noise. Plus there was less metal on you then.

He taught me that Angamancers, Anga- being an old Aldmeri word for iron, for it was said that the first Angamancer discovered their abilities with iron ore, some have a natural preference for certain ones. Some like me can harness them all. However the material is destroyed upon absorption.

Combat as The Angamancer will be a mixture of agile two-handed barbarian, and pugilist mage. Your fists will fly when dealing with one weak enemy, or multiple. Meanwhile the two-hander, in this case a greatsword, will be used against boss-type enemies, or multiple groups of stronger enemies.

Magic wise, to fit with the Angamancy, I decided to only use certain spells and Shouts if I had a certain ore or ingot. After that, I would drop, or use it, primarily to smith up any gear I picked up, which I would then enchant, and sell for coin, particularly for training purposes. Telekinesis was mostly used to chip away at a foe’s health, primarily using weapons lying around or from dead enemies, stunning them too. Or, if I was able to Disarm an enemy, keep their weapon away from them.

Here I’ll provide a small list of spells and Shouts and which ores go with them:

For Dragons, I would use a mixture of Wards (Thank you Ultimate Atronach Stone!), plus innate Breton resistance to Magic, the Atronach Stone, and occasional Dragonskin to help me tank dragon Shouts, while using the occasional shock spell to slowly whittle down their Magicka Pool, which would force them to land. Especially useful prior to getting Dragonrend, or if I did not have it yet.

I often focused on thinning out the enemies, first by using a Frenzy or Fear spell to get some of the small fry out of the way, then depending on what foes remained, I charged in with my greatsword or fists, and started swinging. Especially against heavily armored boss types, I would pop a flesh spell, and use Slow Time, or just being careful, to circle around my enemy and keep slashing, keeping mobile.

Now, the Ultimate Atronach. This semi-little glitch entails using a mixture of premade potions to make it so you can infinitely cast concentration spells, such as Wards, Vampiric Drain, and Telekinesis. However, to accomplish this glitch, you cannot put stat points into Magicka whatsoever. In order to get this to work, you must grab two Philters, and one Draught of the Healer. Now, in front of the Atronach Stone, you’ll want to chug your poultices in this order:

If you’ve done it properly, then you should have roughly 178 Magicka and 78% Magic Absorption. However, that’s not all. This will also mean, while casting any concentration spells, even if your Magicka Bar is empty, you’ll still be able to cast. .

Now, I’ve been in quite a few scraps in my time. But well, a barely 5’0 lass like myself, even with my Angamancy, can only do so much against a triple-team of Stormcloaks, most of whom are likely Legion vets, trained Legionnaires, and those snobby Thalmor pricks. That’s how I found my skull cracked in, and then tossed into a cart.

Alteration-Used primarily for Flesh Spells, which help keep our squishy Ferromancer alive, as well as Telekinesis to bonk enemies over the head (Thank you Marked for Death), and occasional Paralysis.

Restoration-Used to keep ourselves, and our follower (I can hear Avi screaming about followers from here.), and later husband, Mercurio, alive. Plus, Wards to help block magic attacks, especially from dragons.

Enchanting-Another way to strengthen our character, I kept my Skyforge Steel Greatsword unenchanted so as to take advantage of Elemental Fury.

Lockpicking-Alongside fitting with her shady past, this skill helped me get some money for training, especially when lockpicking those higher tier chests which may contain enchanted loot. I roleplayed it as her using Angamancy and a pick to open a lock.

Illusion-Ah Illusion, a nice little skill. This was used to help thin out large groups of enemies via Fear or Frenzy spells, also utilized to get out of dodge/”sneak” through an area via a mix of being a barefoot clothes wearer, Muffle, and Invisibility.

Two-Handed-Your only direct form of damage dealing, sans Shouts, using a greatsword gives us a faster base swing speed than a warhammer or battleaxe, and also allows us to keep enemies at further reach than with a One-Hander.

Speech-It fits that an ex-street urchin and smuggler would learn how to be persuasive and or intimidating, plus it helps with training skills.

Main Quest-While originally reluctant to become the savior of the Nords, and of a land she doesn’t belong to, she in part saves the world, mostly because its where those she cares about (and the stuff she owns), exists in, and she’d prefer not being eaten/enslaved by an immortal god-dragon. Destroy this bringer of Ruin, Alduin.

Companions-Used mostly for training, and to get our hands on the Skyforge Steel Greatsword. Stop the questline before you and Skjor journey into the Underforge. No Beastblood for this Angamancer.

The College of Winterhold-I followed this questline up till I finished Hitting the Books. I RPed this as her wanting to hopefully learn more about Angamancy, as well as hone her spellcasting. She isn’t much for no fancy book learning though.

Destroy the Dark Brotherhood-While she may not be any saint, and isn’t afraid of getting her hands dirty, my little Angamancer isn’t one to think too fondly of assassins. I did however kill Vasha, seedy asshole.

The Thieves Guild-The Angamancer is, if you haven’t guessed by her backstory, one who didn’t come from the most cleancut upbringing. I didn’t go past Scoundrel’s Folly, no becoming Guildmaster and no selling your eternal soul to Nocturnal for this gal.

Dawnguard-While, at the start, the Angamancer begins her story as a reluctant hero, and while she may not fully trust Serana, she at least doesn’t want the sun to go kaput and for a megalomaniac vampire to be able to frolic under the eternal bloodsun.

Dragonborn-Originally I had the Angamancer start this up mostly so we could get some of the Solstheim goodies without paying a fee to board passage to the island, and cause she was curious who this Miraak asshole that wanted her dead was. Then she eventually chooses to stop him to save the people of Solstheim, and Nirn as a whole, from the tentacle-faced madman.

The Heart of Dibella-While she’s not overly religious, even this metallic mage chafes at the thought of what the Forsworn will do to Enmon’s daughter. I also chose to tell the Silverblood mercs to fuck off. Plus the bonus damage against male enemies is great.

Walking through a misty, fog filled forest on the way to the next path in the journey. 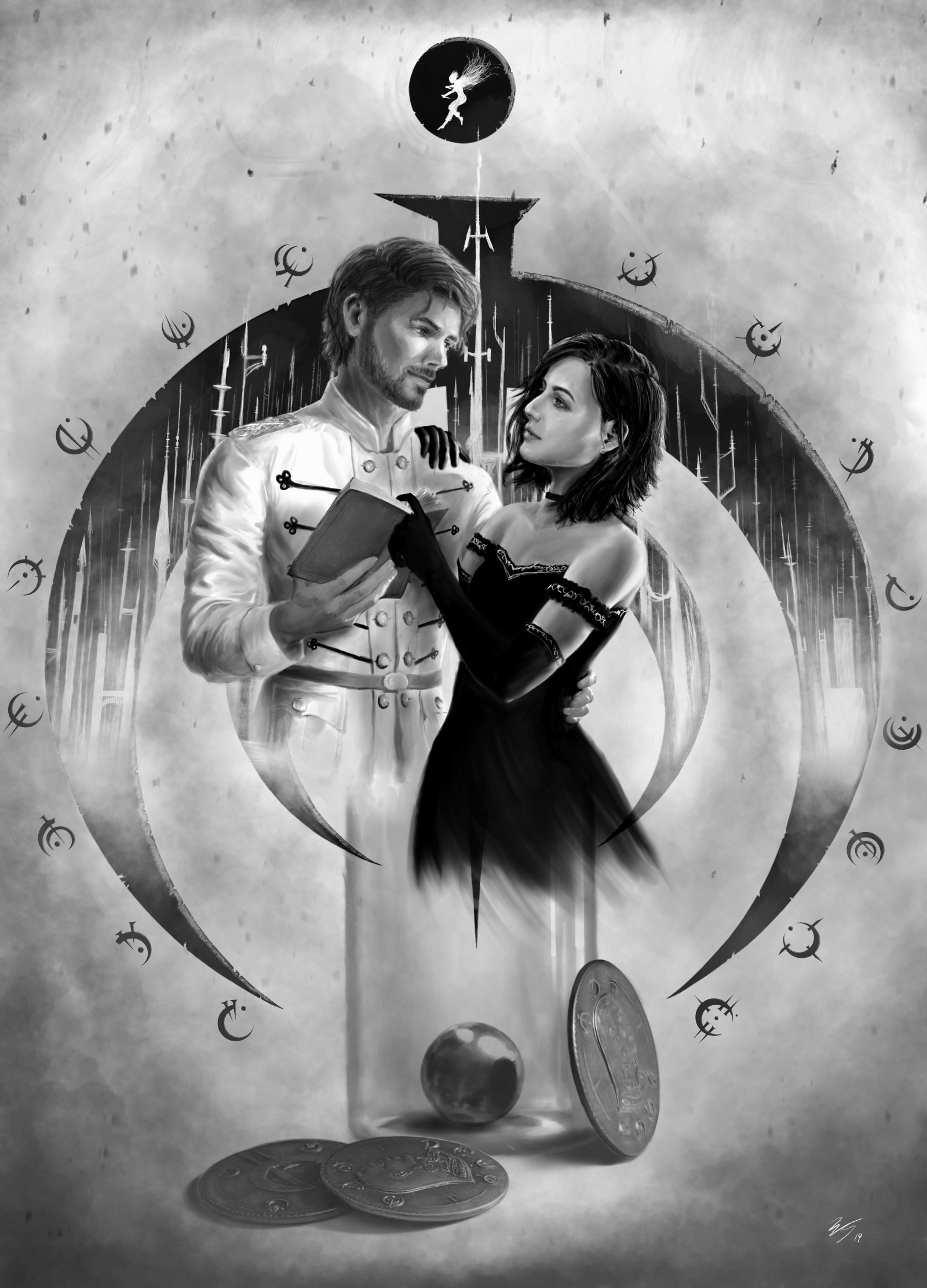 I remember when I first met Mercurio. He had been hired by some noble at a party I was attending on a mission of my own. We hit it off well. Things went swimmingly, till some taffers tried to kill us both. Had to tear off the frilly ballgown and fight in my skivvies alongside him to get out of there alive. We've been a thing ever since

Well, that wraps up my entry for Crossworlds everyone! If you haven’t guessed by now, this build was my attempt at recreating the Mistborns from Brandon Sanderson’s spectacular Mistborn series, particularly from the original trilogy, in this case, the main character, Vin. I highly recommend it. Originally it was gonna be a more overall Mistborn type character, but I figured I’d give Vin a try. It was a fun challenge trying to replicate how Mistborn “burn” various metals to do their magics. And while yes, my fellow Cosmere fans, I do know Mistborn traditionally fight with glass knives, but I wanted my Vin to use the koloss blade she's often featured with. Thanks to Erinoth for the perk and equipment spread, and you, my dear reader, for your time. Until the next build, ciao. 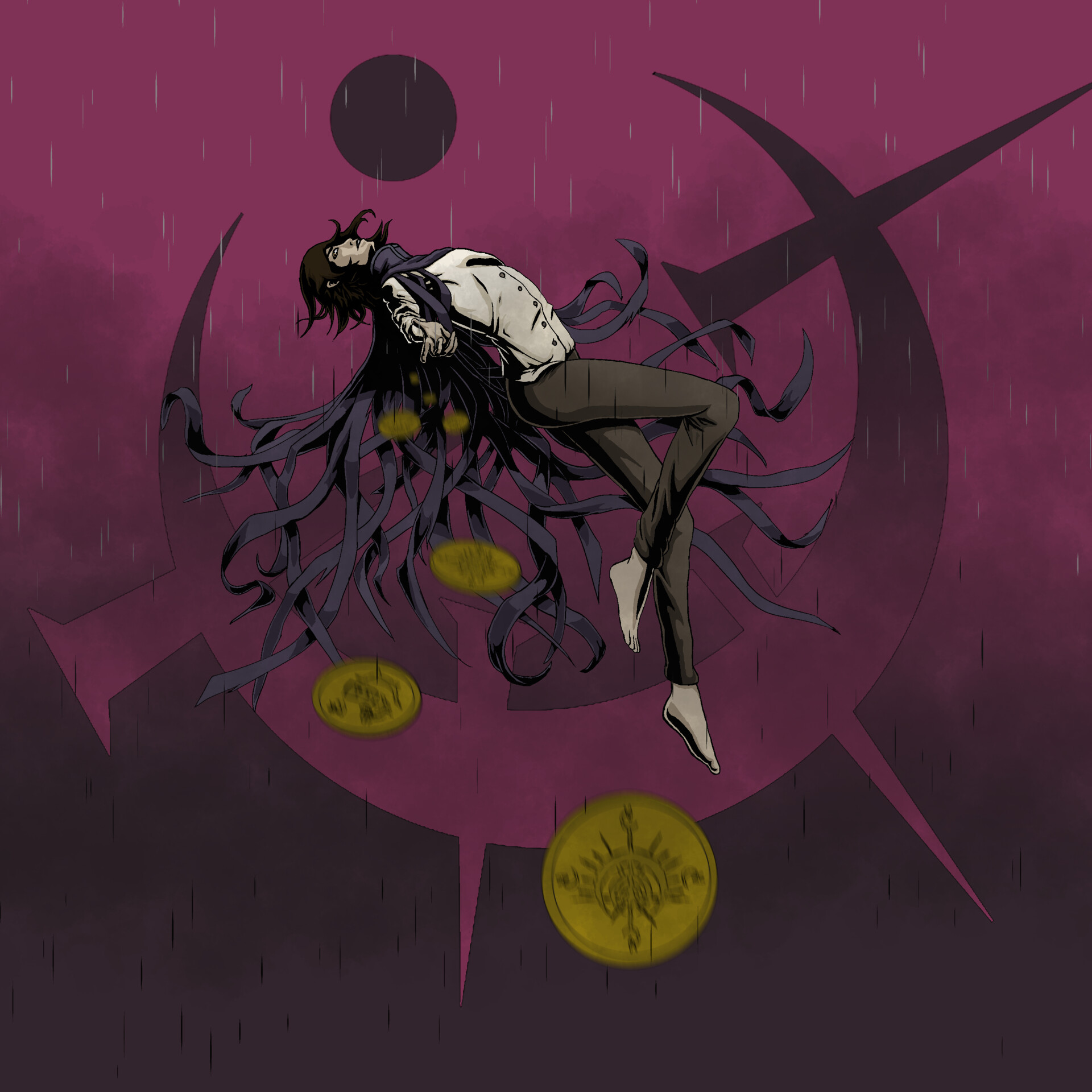