Greetings and salutations everypony, to spoopy month, alias October. In honor of Halloween, or its original Samhain if you celebrate it as such, welcome to my mini-build. Taking the classic ghost concept and giving it a twist with some aid from Japanese folklore, let’s give a bony hand for… 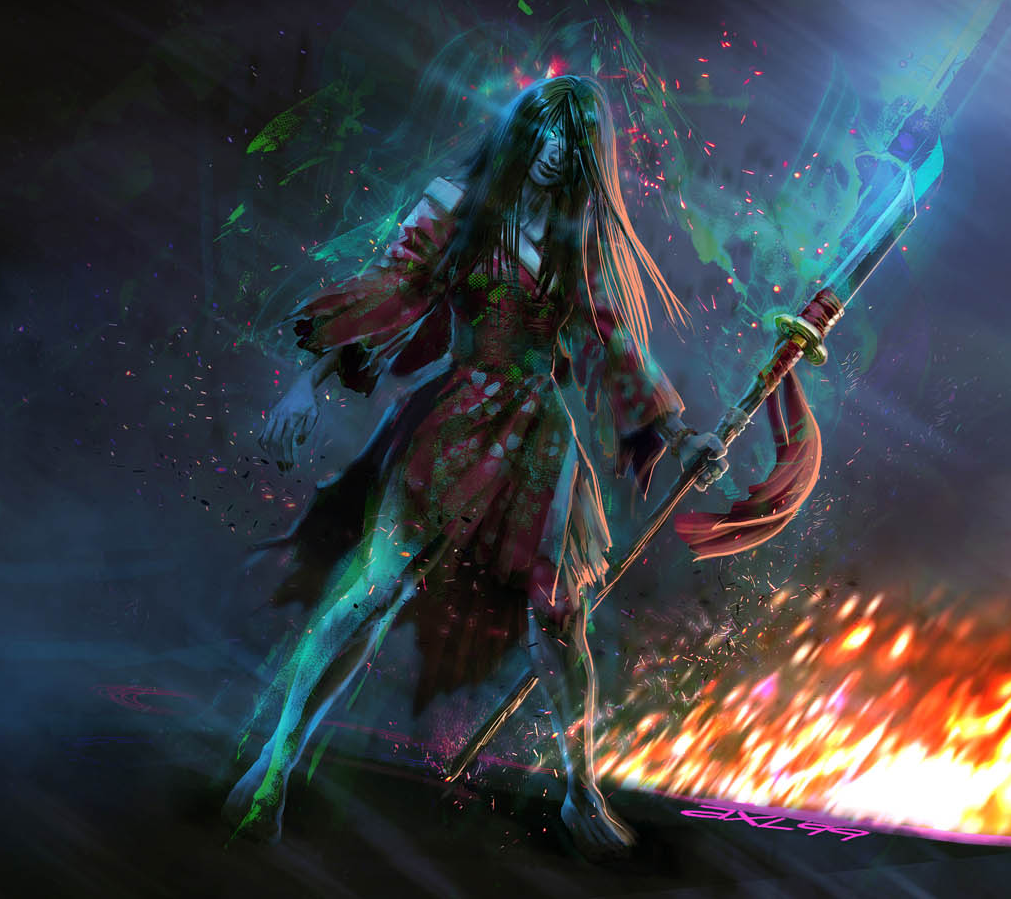 “In Nibenese folklore, there exist the Onryo. These wraiths are said to be the souls of those who die violent deaths. It is said their rage is what fuels them, lashing out at all who stand in the way of it and the one(s) who slew it in life. Tales tell of some who have been known to cause minor earthquakes, pestilence, and worse.

Though spectral in nature, unlike most spirits, the Onryo tend to appear in more solid forms, able to interact with the physical plane more so than their more incorporeal comrades.

Now, I’m sure you’ve seen these long haired, often white dressed revenants in media, the most famous of which being the Ring/Ringu films, with Sadako Yamamura, or The Grudge/Ju-On films with its leading spectre Kayako Saeki (Her son Toshio being a male example). Though one of the more recent examples, gaming wise is Hisako from Killer Instinct. Race: Imperial Vampire. Not only has it been awhile since I’ve played an Imperial, but the bonuses to Enchanting and Destruction are handy, plus, Nibenese.

Standing Stone: The Mage to start with, then move on to the Shadow, for once per day Invisibility, or The Ritual, to summon some fellow undead for aid in your quest for vengeance 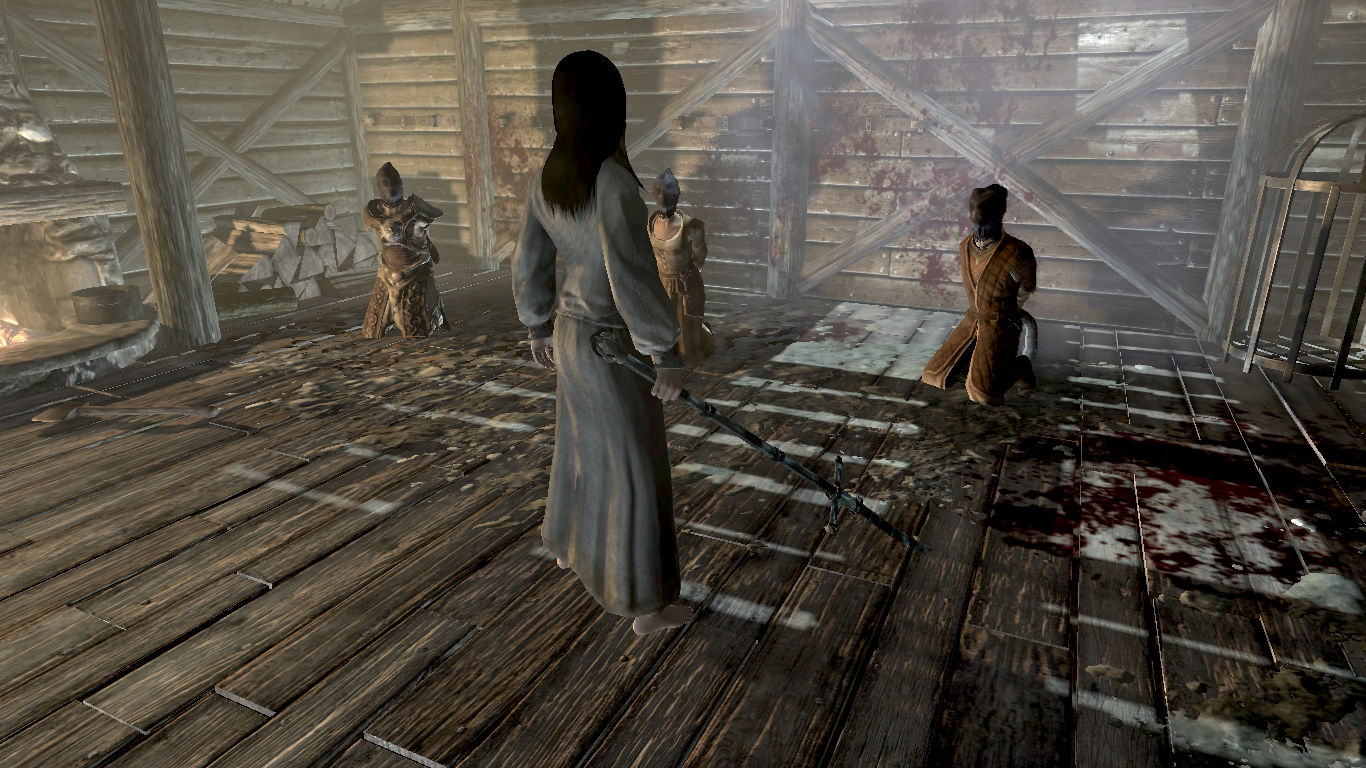 All shall know my pain, and my wrath…. 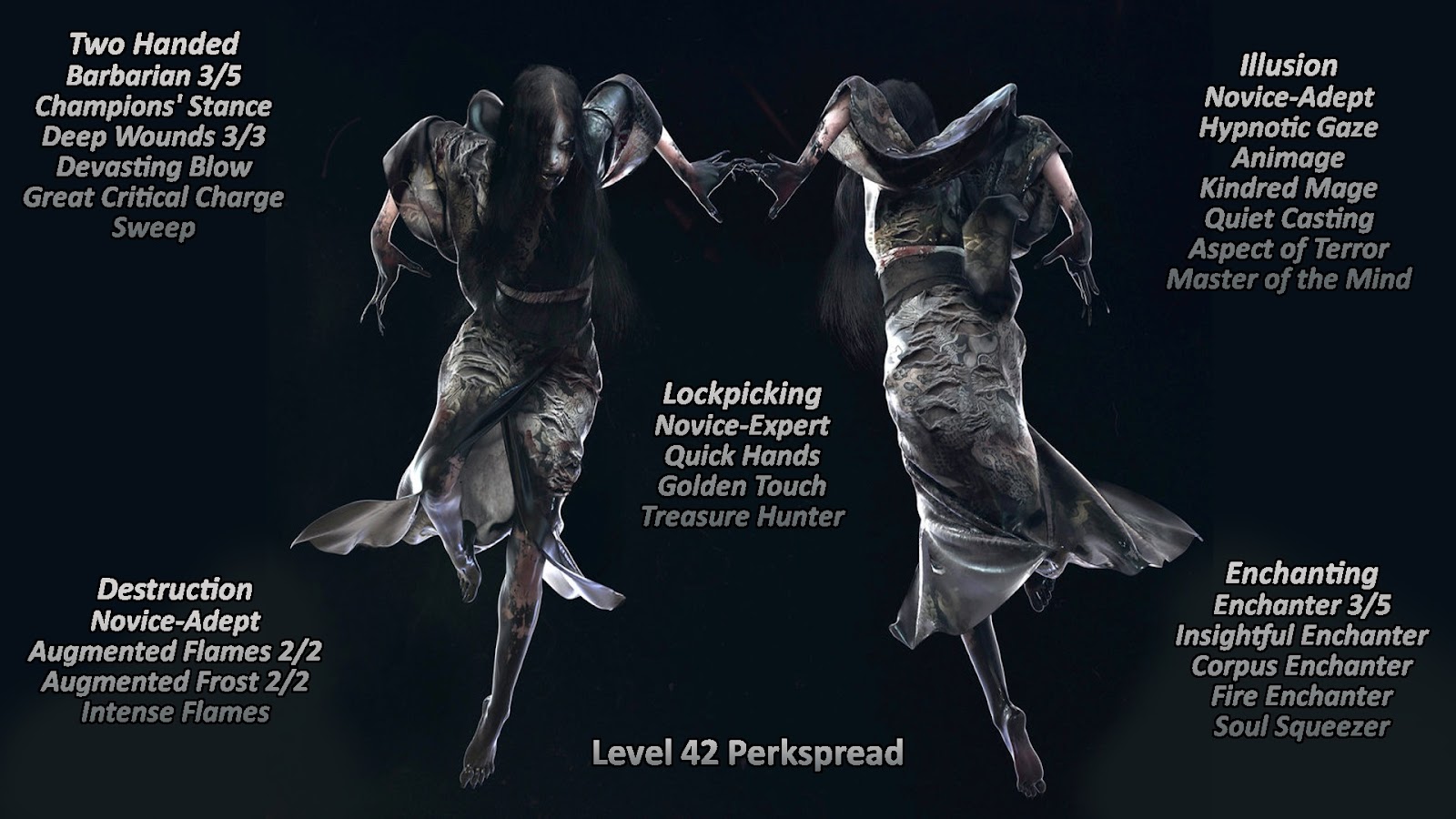 Two-Handed-Used to bump up the damage of the Ebony Blade, and because Sweep combines well with the health absorb effect.

Destruction-As this character doesn’t really use any ranged damage Shouts, Destruction magic both fits the “lore” of the Onryo, and acts as a way to damage dragons.

Lockpicking-Being an incorporeal entity, locks are no barrier to a ghostly entity (Even moreso with console commands)

Illusion-Like the shadow of the Reaper, the Onyro invokes an aura of dread upon her foes. 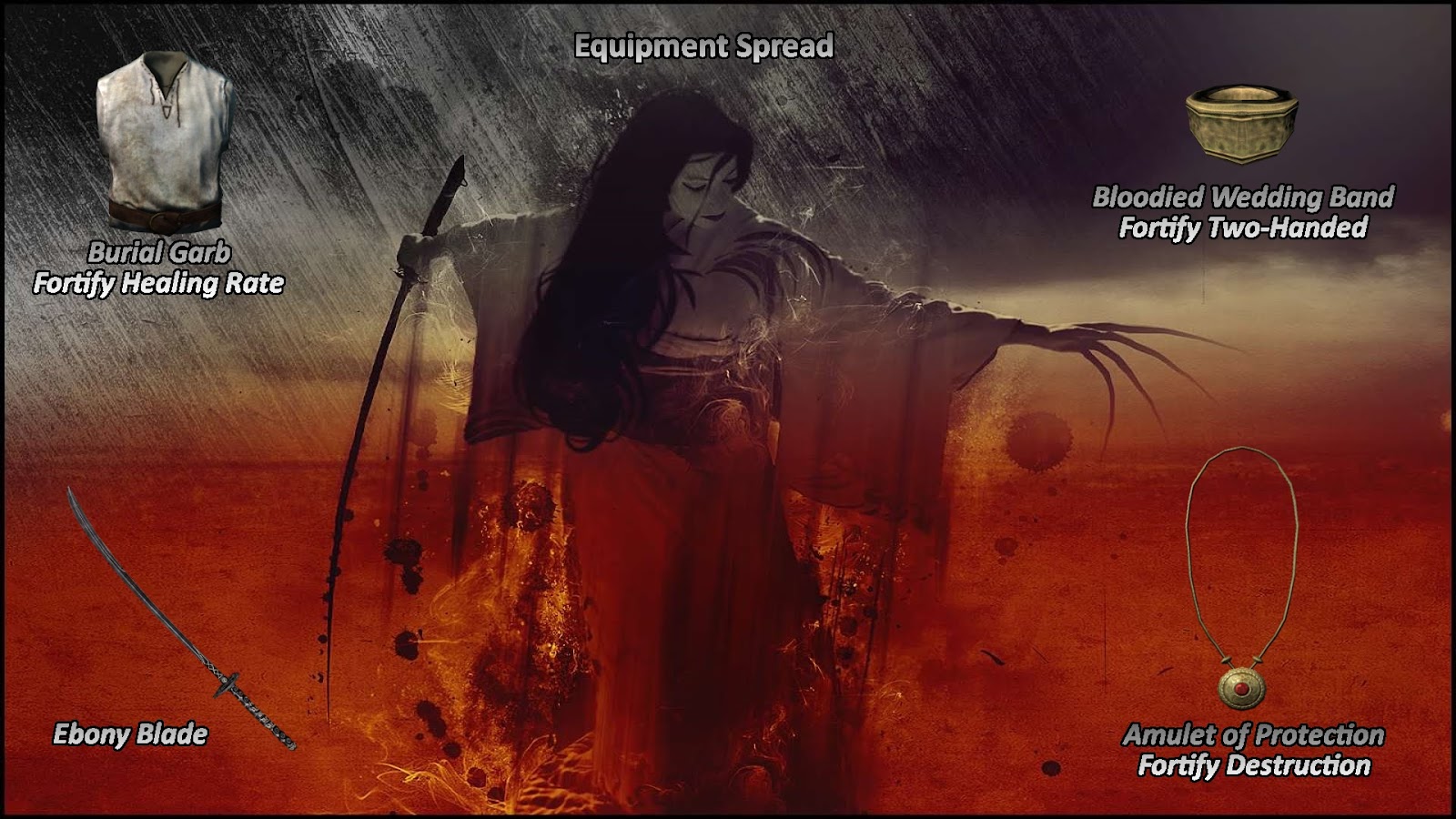 Gameplay as the Onryo is meant to be simple, yet also rather terrifying. Simply put, start out by casting first Muffle to quiet your footsteps, pop on an optional Cloak, then Invisibility to make you, well, invisible. By doing this, you can go into sneak mode, without ever having to tap the trigger or whatever button you assigned for stealth.

After that, simply stroll up to the closest enemy and, thanks to Quiet Casting, silently hit them with Marked for Death, then follow up with Fear to drive out the weaker ones, laying down Runes and AOE spells like Blizzard as they run past, then begin dueling the tough ones, using Become Ethereal to stay alive. Focus on mages, especially fire mages due to their increased damage to you, and archers. Once we’re down to the last enemy, hit him with a Paralysis spell or poison, then finish him off with Soul Tear.

As for Dragons, as we don’t advance far enough into the Main Quest to unlock Dragonrend, we’ll have to use a mixture of Marked for Death and spells such as Firebolt and Ice Spear, or Storm Call, to slowly chip away at him until he’s forced to land, then go ham on him with the Ebony Blade.

For factions I joined the Dark Brotherhood to gut Gaius Maro, and the Dawnguard, if only to kill Vingalmo, who in my backstory were my Onryo’s jilted lover and murderer, respectively. 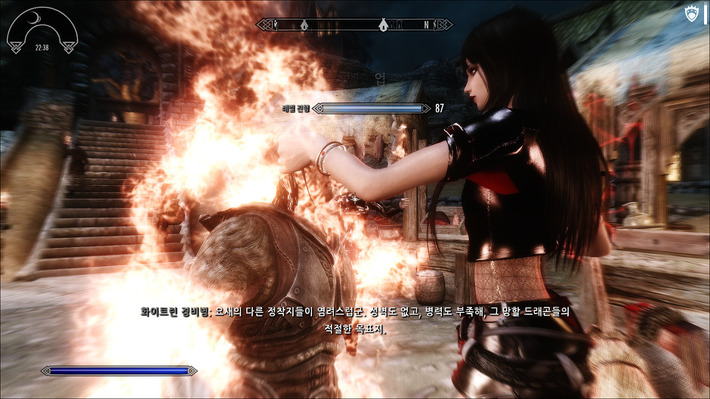 Roleplay as an Onryo depends on whether you want to stick to only killing your target, IE go “ghost mode” via muffle and invisibility until you reach them, or full wrath mode, and kill both the target and anyone nearby. So, say you find Gaius in Solitude. You can either silently gut him while no one’s around, or attack in broad daylight, slashing your way out of the city. 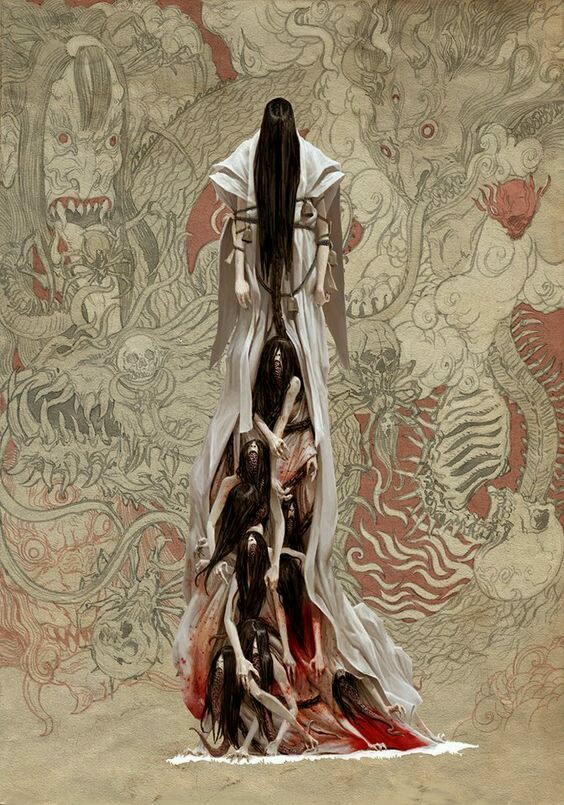 The first half of the lore in the opening is pretty much taken word for word from various wiki entries on Onryo, and all of them, at least for plays and other media, have a similar look, IE:

Hence what I tried to copy. Though in my case, on PC, I was able to use the Moth Priest Robes. Aside from the modern incarnations, one of the most well known is that of Oiwa, from the old Kabuki play Yotsuya Kaidan where a ronin slays his wife, and his driven to madness over time by her spirit.

And yes, while more often than not women, there are male Onyro. One such case was Sugawara no Michizane, a politican and poet from the mid 800’s, it is recorded that after his ousting from the position, and later death, all those who were connected to his ousting died, whether to unknown causes, or lightning. Afraid of his apparent curse, the government brought his sons out of exile, posthumously reinstated him and then made him Grand Minister. He is now revered as a god of education.

The legends have, like the manga and anime character Tiger Mask, have inspired a number of wrestlers.

So, thank you for reading my build, as well as a big thanks to Lee Fiskillis Carpenter for the spreads as usual, and Pixel for hosting the Event.