Hey guys! When I heard about the Halloween Mini Build Event, I wanted to join and create my own character, however, I was (and still am) confused about Halloween as I've never celebrated. Hell, thinking of a build that is both unique and worthy of being in an Event was even harder, until I was told about Skin Walkers 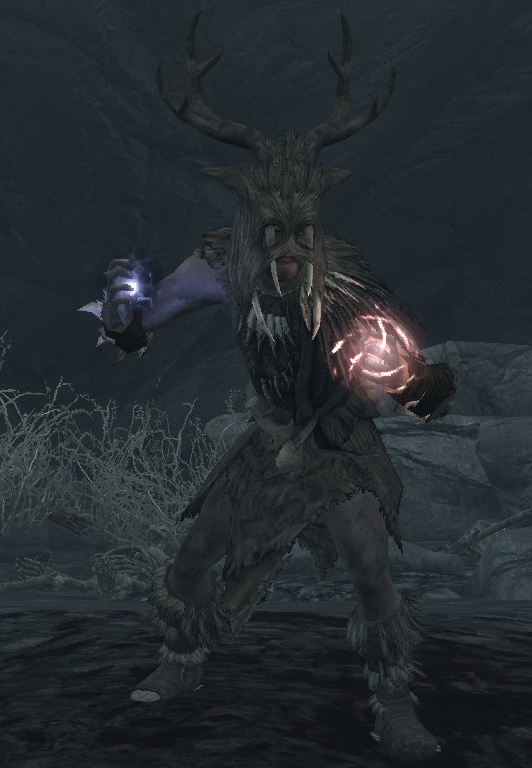 Few have seen of a Skin Walker, and even fewer have survived the battle/ordeal, as most are left dead with their hearts eaten, or missing. Never to be found again.

All that is known about these Skin Walkers is that they have the ability to shapeshift into another animal or person. A werewolf-like appearance being the most common. There are rumours that these 'Skin Walkers' are either creation of Hircine and Namiira.

I've never really played as a Nord often at all, as I thought of them as essentially just brutes, barbarians that bring nothing to the table, but hell was I wrong. I highly recommend playing as a Nord as you get a 50% Resist Frost (most enemies that I encountered used Frost) and if everything turns pear shaped, Battle Cry can be used as a last resort. Essentially a Level 99 Fear Shout. 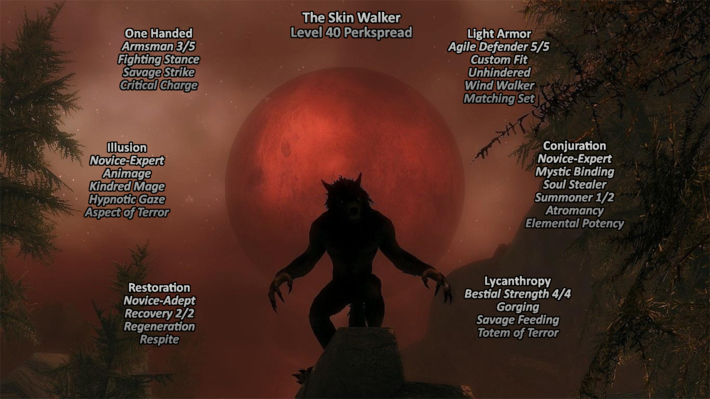 Conjuration: I mainly used Conjuration purely as additional support when I was in battle, with both Summons and the Bound Sword, which meant, I never had to worry about carrying a weapon or being disarmed. If you want, Necromancy is a perfectly good subsititue compared to Atromancy.

Illusion: I had decided to use Illusion for something I've never done with it for a while. Using it for Fear. It really suits the Build itself, when combined with Turn Undead and Howl of Terror, as whats more frightening that a Skin Walker?

Light Armor: I found this skill quite useful for survivalability and Roleplay. As nothing, that I know of suits a Skin Walker more better than a set of Forsworn Armor, and hell, Forsworn Armor isn't very strong, hence the amount of perks.

Lycanthropy: Lycanthropy was the skill that brought this entire build together. Combined with the Cursed Ring of Hircine, I can nearly guarantee that every playthrough will be different, along with the Totem/Howl of Terror, even in Werewolf form, you have no need to worry about being overwhelmed.

One Handed: This skill was quite useful and fun. As nothing has been as more pleasing then using Critical Charge against a target that has been hit by Fear/Rout. Hell, even Savage Strike made it give my enemies even more reason to fear the Skin Walker.

Restoration: This skill was mainly used for Healing (obviously) with the occasional Turn Undead and Turn Lesser Undead (staggers all Draugr regardless of Level, unlike Turn Undead). Hell, even Wards were helpful against Necromancers, blocking their annoying Frost Spells. As I stated before, I found the Forsworn Armor set to really suit a Skin Walker, especially with the edition of Human skulls on the 'belt' of the Forsworn Armor. In my opinion the Cursed Ring of Hircine really lets this Build shine, as it has a 10% chance to turn the Character into a Werewolf (every hour in-game time), allowing for some very interesting battles and decimations.

As you probably noticed I haven't included any Necklaces in the Equipment Spread above, as I personally never really used any sort of jewellery besides the Cursed Ring. If you want, the Helmet of the Old Gods, can be swapped with the Forsworn Headdress.

Throughout my entire playthrough, I never really had much problem as combat is fairly simple, for this Build. I can not stress enough the usage of Turn/Repel Lesser Undead along with Fear/Rout.

Against the Undead, (which was commonly Draugr), I found myself using Turn Lesser Undead (for the Stagger effect) in a 1v1 battle, whereas Repel Lesser Undead was useful against groups where both my Atronach and myself had the odds against us.

Against Living enemies (Bandits, Forsworn etc), I found myself using Rout/Fear regardless of the amount of enemies. If the odds were stacked against myself, I would find myself focusing primarily on the strongest enemy (sometimes wasn't affect by Rout).

Against Mages, I found Frost Atronachs (against Necromancers) and Storm Atronachs (against any other Mages), to be extremely effective. However, I always approached with my Ward raised, just in case they switched targets onto myself.

One thing that I can say is besides any Fear effects, is never underestimate the power of Summons.

Roleplaying as a Skin Walker is fairly broad and easy, depending on how far you want to go. I personally found myself acting like a Shaman, only to be replaced/corrupted by a Skin Walker around Level 25 (when I became a Werewolf and obtain the CRoH).

With every transformation, I imagined my character slowly becoming more dangerous and willing to attack anything and everything regards of who they were. In a sense a Chaotic Evil (I think that would best describe it) character, by Level 40. 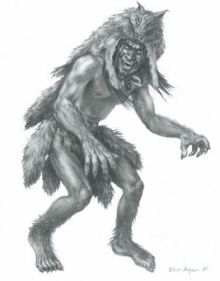 Skin Walkers are apart of the Native American mythology, also known as a "yee naaldlooshi" (Navajo for "by means of it, he/she/it walks around on four legs), and is usually a person with supernatural ability to shapeshift into either another animal or another human being.

They are very similar to Werewolves and other paranormal shape shifters, with a few key differences though. Most Skin Walkers abilities are largely powered by dark rituals or the breaking of native taboos. Each Native American tribe's version differs in the details of Skin Walkers. Most Skin Walkers are differentiatedd from their brethern by being able to take multiple shapes, but are not free-form shapeshifters.

The myths that usually describe them as humans who wear only an animal skin, or an abomination of human and animal forms. In the mythology, they have a few extra abilitys such as Telepathy, Voice Changeling (mimicking human and animal sounds) to name a few.

I would like to thank;
-Chris Diokno for raising my curiosity about the Event and telling me about TV Tropes (where I found the Skin Walker).
-Pixel, for holding the Halloween Mini Build Event. I can't wait to see what the next Event will be!
-Cat.B for allowing me to use her font 'Stranger Back in the Night' from DaFont in my Banners (Both on my Page and at the bottom of the Build)

If you have any questions, don't be afraid to ask. And don't forget to hit that like button folks!