Hey guys! Welcome to my second submission to the Crossworlds Event for 2019. After several (I had another two more ideas ready for Crossworlds), not work out, I decided to have one last shot. Onto the Build shall we? 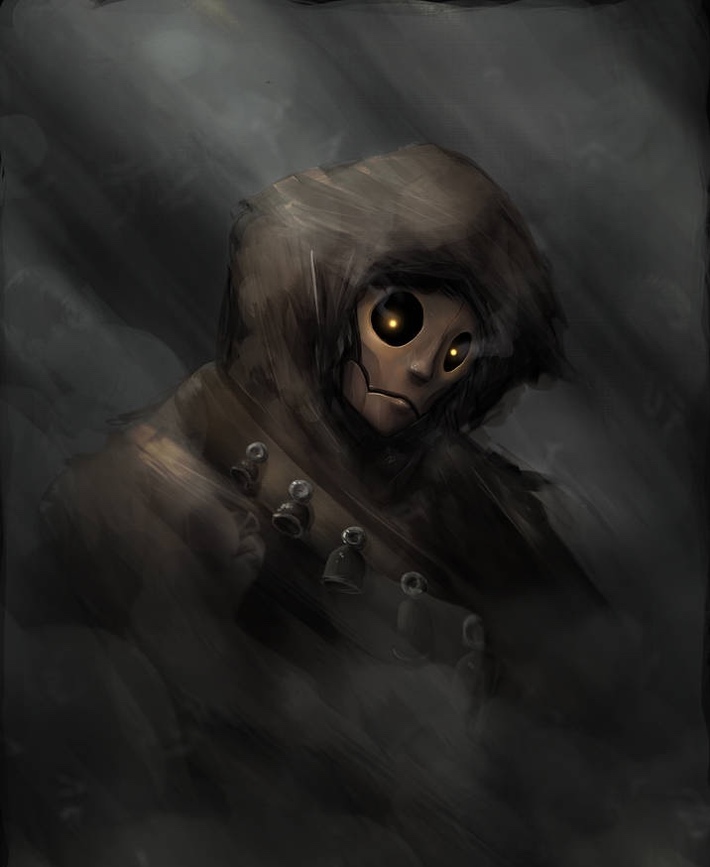 Ordinator: This mod is essential to the Build, as it opens up hundreds of different playstyles and truly allows this Build to shine.
Andromeda Standing Stones: Optional, but the Ritual Stone was too good to pass up for the Build.
Summermyst: Opens the door to many new enchantments. Not essential but some of them work really well, from both a Gameplay and Roleplay perspective
Alternate Start - Live Another Life: Completely optional. For the sake of it, I mainly chose this mod for the 'Escape from my Cell' option.

Race: Female Breton Vampire. Breton works perfectly especially with Dragonskin and their innate Magic Resistance, but Nord is a worthy substitute, for their Frost Resistance and Battlecry.

Stone: Ritual. With the Ritual Stone in combination with Andromeda, it allows use to 'raise' killed NPCs and creatures, and raises them automatically at the start of combat. If you don't have Andromeda, the Ritual still fits the bill for the Greater Power of raising all nearby corpses to fight for you.

I decided to create this Build around debuffs (not from Alchemy or spells (e.g Destruction spells), but instead focus on the synergy of Conjuration and Alteration in Ordinator, along with Illusion, in the form of reducing enemy Magic resistance, reducing their attack damage while at the same time boosting my AR and attack damage via non conventional means (Dark Whispers and Spellblade).

I chose not to follow start the Main Quest even for the sake of Dragons and the Dragonborn DLC. However, if you plan to, I highly suggest it for Drain Vitality, which drains enemy Stamina, Magicka and Health (if using all three words), creating more synergy with Bound Weapons.

I also chose not to add an Equipment Spread/Equipment Section, this is the case as I've decided to let you, choose what enchantments and armor you want to wear. You have no Armor skill so you aren't restricted. The choice is yours!

(For those wondering, I chose Krosis, Dawnguard Armor (brown variant), Dawnguard Boots and Gauntlets, with enchantments from both Summermyst and Skyrim). Conjuration: The Witch is more than capable of summoning fearsome Daedra and Daedric weapons from Oblivion.
Perks of note:
-Void Burn: Bound weapons burn victims with unholy energy for 5 seconds, halting Magicka and Stamina regen while draining 15 points per second. When both are depleted, the energy starts devouring their Health, dealing 15 points of magic damage per second.
-Hollow Binding: Bound weapons cut through flesh and spirit, reducing magic resistance by 30% for 5 seconds
-Dark Whispers: Bound weapons induce a battle rage in their wielder, granting 20% extra attack damage and 100 points of armor rating for 5 seconds when a target is struck.
-Covenant of Coldharbour: Hollow Binding reduces magic resistance by an additional 30% if you control a summoned Daedra or other non-unded minion.

Alteration: Those that encounter the Witch find themselves unable to focus and find themselves tiring.
Perks of note:
-The Monarch: You cannot regenerate Magicka and lose 10 points of Magicka per second but absorb 25 points of Magicka per second from living creatures within 20 feet whether friend or foe.
-Nullifier: You radiate a dampening field, preventing enemies within 25 feet from regenerating Magicka and Stamina
-Rend Resistances: Whenever you attack with a weapon, reduces the magic resistance of nearby enemies within 10 feet by 15% for 4 seconds
Note for Perks:
-Alter Self: Attribute (Health)
-Alter Self: Resistances (Fire and Frost)

Enchanting: With each adversary the Witch encounters, She finds herself becoming stronger and stronger.
Perks of note:
-Regalia: New enchantments placed upon robes, circlets, hoods and necklaces are 30% stronger
-Attunement: All enchantments on equipped weapons and armor are 10% more powerful and last 10% longer

One Handed: Those that are unlucky enough not to run in fear, find their very attacks becoming weaker with each of the Witchs' blows.
-Clash of Champions: Attacks with swords reduce the target's attack damage by 10% for 3 seconds

Melee enemies: There is nothing more pleasing then standing toe to toe with a Bandit Chief, and watch him struggle against you. Use power attacks where you deem necessary. If things get too tough, I recommend using Calm or even Fear on said melee weapons.

Mages: Ah, mages. Normally a massive pain in my side, but not with this Build. I suggest throwing a Fear Spell (if you have Soul Crusher), or even using Drain Vitality, to begin wearing them down. Up close and personal, there isn't too much difference to melee enemies, except for the fact that Mages won't be able to cast ANY spells including Fast Healing.

Archers: Not really too much of a bother. Simply the same as melee enemies. Get up close and personal, and whack. Rinse and repeat.

Something worth noting, is try and have a Flame Atronach summoned, in the odd case that you do need backup, that and with Intutive Magic, you can use Fast Healing if need be (I never did).

I roleplayed that the more I used Conjuration, the more and more the Witch became corrupted and lost to Hyde.

For Quests, I did, I'll admit I did only one, but I acted like a wandering warrior. Keeping away from large towns. The Quests I did are:

Laid to Rest: I roleplayed this as the Witch knowing that if she doesn't act soon, Morthal will fall (I done this early, when the Jekyll side of Her was still 'in control')

Dawnguard (Volkihar): I envisioned entering the Soul Cairn to be when She loses the last scrap of her humanity to Hyde, the point of no return.

There are several other quests that could work well with the Witch. Some of them are: The Man Who Cried Wolf/Wolf Queen Awakened, Dragonborn, Main Quest.

For those who are curious about what about the Witch, be sure to check out the RP Profile here. 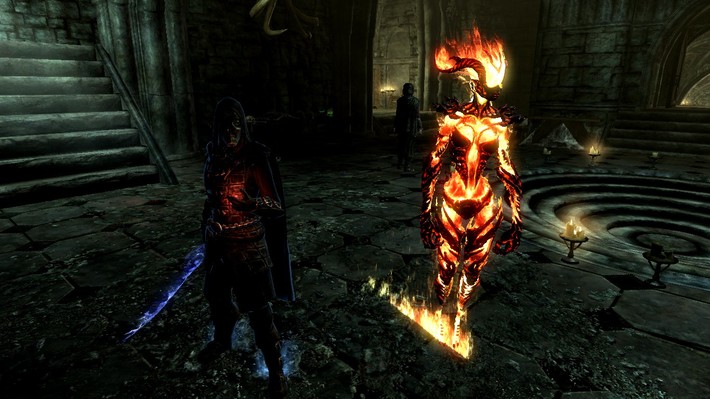 For those who haven't noticed. The character I recreated in Skyrim was none other then Clariel (Jekyll)/Chorrl of the Mask (Hyde), found in the Abhorsen Series. I chose to focus on Chorll, as in my opinion, she is one hell of a character, a Berserker (Dark Whispers and One Handed perks), an Abhorsen In Training (if memory serves me right) and one hell of a character to kill off (she basically 'possessed bodies' each time the former one was destroyed/time and caught up with it) AND last but certainly not least; a Greater Dead.

(It took 4 books for Chorrl to be killed for good. Lirael, literally had to take Chorrl to the Ninth Gate to defeat her. She was only able to defeat Chorrl with Clariel (her Jekyll side)).

Chorrl came by several names, some of with are: Chorrl of the Mask, The Golden Mask and The Witch With No Face.

For those curious, I highly recommend reading the Abhorsen Series. Another reason why I chose her, was that she wasn't some bad guy. She defeated/survived several Abhorsen, was a Berserker (which is fairly rare in it's own right) AND was able to raise/control both Free Magic Creatures and the other Lesser Dead.

For those wondering here's a glossary/translation of what I just said.
-Abhorsen: Basically the witchunter. Only one is alive each time

-Beserker: A 'race'/'blood' that gives them great power and strength. In a sense, berserkers in Viking mythology

-Greater Dead: There's Lesser Dead, and Greater Dead. Greater Dead are nothing to laugh at and are extremely hard to kill

-Free Magic Creatures: Without going into the lore of the Abhorsen Series. There's Charter Magic and Free Magic. Charter is the entire world, Free Magic is the 'left overs'. Free Magic Creatures are extremely deadly and can not be banished like Dead, meaning that you can only 'capture' them.

-Ninth Gate: Basically, I can't explain it all in one sentence. But the Ninth Gate is the Final Gate in Death, where all Dead (both Lesser and Greater), eventually end up. Once someone looks upon the stars, in the Ninth Gate. There is no coming back.

Whoa. That was a LOT. Man, it was worth it though. I want to thank:

-Pixel, for once again holding Crossworlds and helping me decide the Armor combo

-Chris D, for helping me flesh out and expand on Chorrl, as well as giving me information on Her.

-Blackblood, for having the Screenshots Thread in the Roleplay Group, which kept me going especially when I thought I wouldn't finish in time

-Everyone else, who gave me ideas and general pointers (at times without even realising it) for the Witch.

-And YOU for reading this

Don't forget to hit that 'Like' Button and tell me your thoughts below! Till next time fellas!