This is going to be my entry for the Crossworld's event. I'm putting it up here for a bit of feedback, but also to help with the formatting and such. So feel free to let me have it. I give to you:

Once a simple soldier, you were transformed after death came for you in the frozen tundra. Now, you find yourself with an unending desire to cause pain. Your blades hunger for blood, and for souls. Now, their appetite shall be sated by the blood and souls of dragons…

Death knight... That is what they call you. One who answered the call of death, and refused to yield to it. Your frost magic chills the bones of even the hardiest of creatures. Your runeblades never dull, and their appetites never cease. The world of the living can no longer comfort you. There are those that curse your very existance, but the air that fills their lungs is paid for with the price of your soul. 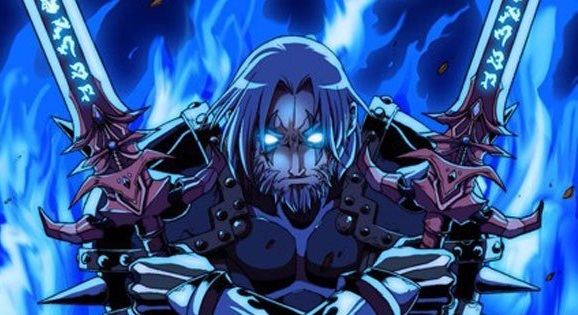 Race: Nord. Honestly, you could go with any of the man races, but I felt like the nord was the most fitting aesthetically, and their battle cry is an incredible ability with no level cap.

Stat spread: 0/3/1 Magicka, Health, Stamina. You are meant to be a juggernaut, able to absorb all kinds of damage and keep going.

Standing Stone: The Atronach is really the only choice. Death knights have an innate ability to absorb magic and use it to fuel their own abilities.

There are a couple mods that really make this build shine, and one that is absolutely required for the playstyle.

Ordinator - Perks of Skyrim: If you’ve never played with Ordinator before, you owe it to yourself to try it at least once. It is the perk overhaul of all perk overhauls. And it is absolutely required for this build because of one addition to Enchanting, which really makes this playstyle.

50% more perk points: One of the things ordinator does is add a LOT more perk points to the trees. I use this mod because 1 extra point every other level feels pretty necessary to be able to take the perks you need for any ordinator playthrough. Also, this character doesn’t use a lot of skills, so you need the extra perk points to fill out your tree as you go.

Apocalypse - Magic of Skyrim: Not required, but it does add a low level spell called “Ocato’s Recital” which is incredibly handy, allowing up to 3 spells to be cast for free when you enter combat. It may sound a bit OP, and it can be, but playing on Master/Legendary difficulty really helps.

Wintermyst - Enchantments of Skyrim: Again, not required, but I find that this really expands the things you can do with enchanting, and provides some really unique abilities. It also offers a weapon enchant which does more frost damage to enemies who are frost resistant, which is not just incredibly useful in Skyrim, but incredibly thematic as well. I was able to mostly avoid grinding Enchanting with help from the Wintermyst mod, because it gives you SO many different things to disenchant. But once you get to 40 enchanting, you can pick up the “Spellscribe” ability which lets you store a spell to be cast on power attacks, with a cooldown based on your enchanting skill. It will give enchanting experience, as well as experience for the skill you’re using (in this case, destruction). From there, I put a soul trap enchant on any weapon I used along the way, and just bought out all of the vendors of soul gems to keep my weapon topped off.

For the spellscribe ability, you need to be able to dual-cast your spell. Fortunately, once you reach 40 in destruction, you should only need about 160 magicka to cast the spell, which is not a difficult feat to manage with zero magicka investment. I used the “Frost wave” spell from the Apocalypse mod early on with my spellscribe ability.

The Heavy Armor and One-handed abilities are pretty self explanatory. Ordinator adds on to the vanilla heavy armor perks to grant some truly interesting concepts about what it means to be an implacable juggernaut. The one-handed perks are similar to the vanilla ones, only expanded to add more variety to your combat. There’s a bit of flexibility here. If you want extra stamina, Rahgot is an excellent choice, and for someone who uses a lot of power attacks, 70 stamina is not easily overlooked. If you want to beef up your frost damage, than Dukaan is what you want. It also gives you a bonus to frost resistance, making you nearly immune, so other frost mages, or frost dragons will have no effect on you. Personally, I kept both, and would switch back and forth. The armor I enchanted with health and stamina regen, the gloves with one-handed damage and heavy armor, and then a ring and amulet with health, stamina regen and one-handed damage. The boots fit the theme of the frozen death knight because of their ability to instantly freeze the water at their feet. I was super bummed that I couldn't translate this into Arvak though. The swords are both enchanted with Soul Trap. Endbringer is also enchanted with Absorb Health, wheras Razorice has an enchantment called "Piercing Frost Damage", which I touched on briefly in the mods section.

Early levelling goes a bit slowly, but I found it worked best as a simple spellsword. Having the Atronach stone plus a hood of some kind for extra magicka will let you use frost rune pretty early, and be a huge bonus to your destruction levelling. Once you hit 40 destruction, you’ll want to drop your spell hand entirely and switch to dual-wielding weapons. Make sure at least one has soul trap on it ASAP to help level up your enchanting.

Combat is relatively straightforward. One or two enemies are pretty easily handled by quick slashes and spellscribed power attacks. Where the Herald really shines, however, is in his ability to take on multiple foes at once. I run a mod called Immersive Patrols where you occasionally see warbands of Stormcloaks and Imperials fighting each other. I happened across a group of about 25 all doing combat far away from town and went to work.

When facing large groups, Frost Breath augmented with Dragonborn Frost from Hermaeus Mora should be your opener. All 3 words will pass through the entire group, knocking them all down and slowly ticking away their health. Then, pick an enemy in the group and open up with a power attack for your Ice Storm to go out and shatter several of the fallen. With any luck, you’ll kill a few of them just from the shatters popping over top of each other. From there, it’s generally a quick enough task to start dispatching the remnants.

Death knights also have minor necromantic powers as well. While you don’t put any perks into Conjuration, the Soul Tear shout is an incredibly powerful tool in the right situation. And the reanimate effect works on pretty much anything short of a dragon, including trolls and giants. If you ever get into serious trouble, having a meat sponge for even a couple hits can help give you the time you might need to regroup and down a health potion or two. This is especially hilarious to do to gargoyles when you’re fighting Harkon.

Ranged enemies can be more problematic, but you have a lot of health to soak up those arrows, and you can send your ice storm quite a long way. The good thing is that archers tend to be more squishy, so an ice storm can usually send them reeling. It’s also worth noting that you will want to get Companion’s Insight from the black book inside raven rock mine. The last thing you need is to be sending every person forced to join you temporarily for a quest to their knees every battle. Civil War: I actually left this one open-ended. As a former soldier, joining the imperial legion makes sense. But as a Nord, joining the Stormcloak Rebellion also makes sense. I personally chose to do neither, and not engage in the petty politics of the land.

Dawnguard: You should accept Harkon’s gift and become a vampire. After you kill Harkon, you should cure yourself of the vampirism. If you’re familiar with the lore surrounding death knights, then you should know that they are bound to the Lich King in service. There is a sect of Death Knights who managed to wrest themselves from his mental control and pursue their own endeavors. I like to think of the cure for vampirism as throwing off the curse that made you a puppet in undeath. Also, the vampire sunlight weakness felt wrong to the playstyle.

Arvak: The horse from the soul cairn looks as close to an actual deathcharger as i’ve seen.

Dragonborn: Miraak is a greater threat to this world than people realize. He wants to make the world his puppet, and he must be stopped. If the price is paid with your soul, then so be it.

Main Quest: The blood of the dragons course through your blades, but there is one dragon who holds himself above all others. One who has escaped justice outside the threads of time, and one who would devour all of existence should no one stop him. Your runeblades hunger, and they cry out for the blood of the first.

Dark Brotherhood: I really struggled with whether I should do this one or not, but ultimately I decided to leave them alone. Killing Grelod in broad daylight felt wrong for the roleplay to me personally, so I didn’t even destroy them. But, there is definitely an argument to be made for destroying the Brotherhood. The ends justify the means, even if it means committing one murder to stop countless others. 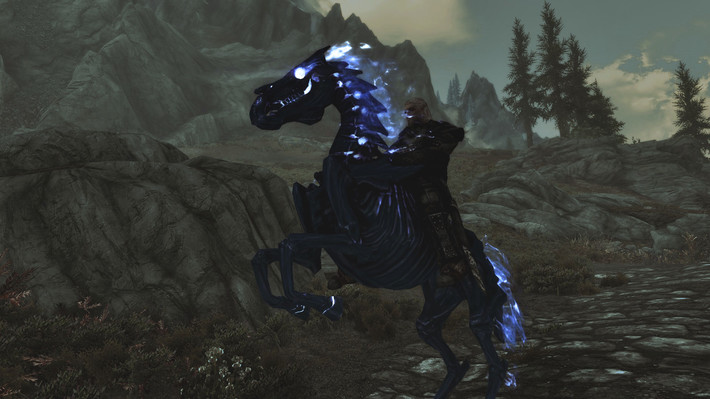 I’ve had this build kicking around in my head off and on for a couple of years. I based the Herald off of Thassarian, a frost death knight in the Warcraft universe. To me, he is one of the most interesting characters in the lore, and has an incredible story. Gameplay wise, the Spellscribe ability really opens up the playstyle, giving it the feel of an actual frost death knight from WoW. As they say in World of Warcraft: SUFFER WELL!