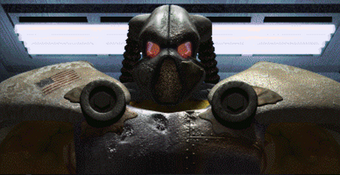 This is Captain Michael Blackwood, of the 501st Hellfire Division. This report is made to commemorate the recent death of one Special Agent Frank Horrigan.

Horrigan was, to put it bluntly, a monster. Even with his low intelligence, the man managed to make it to the Secret Service in his twenties. However, even with all his skill, he had....issues. Man was a damned psychopath, and sadistic as all hell. After an incident that involved him razing a fledgling town to the ground by himself, for suspected mutation, or at least, I've never heard the story of the event, just hearsay, the President had him transferred to wasteland operations in 2236.

It was there he and his squads set to work enslaving wastelanders and putting them to work on excavating an old military base. Bad news is, it was an FEV, or Forced Evolutionary Virus, research center. Old Frank was exposed to it, and well, let's say the labcoats up at the rig were VERY interested in him them.

For a little over two years, they subjected him to experiments that, God, still make my stomach turn. He was a Super Mutant, which, in my opinion, he was better looking as a mutie than when he was a man, heavily augmented to boot. They increased him strength, durability, intelligence, and Heaven knows what else. They strapped him into an experimental suit of Power Armor, turned him into a walking nuke.

After that, well, he became the hammer of the Enclave. Whenever the top brass wanted something REALLY dead, they sent Frank. With a suped up plasma gun, he brought death to all who stood in his way, made the rest of us grunts look like fucking toy soldiers.

Well, until he met his match. You see, a few weeks back, we found a group of Tribals, apparently founded almost a century back by some Vault Dweller from Vault 13. After some tests, they were taken to the Poisiden Oil Rig just off the coast for further "research". Turns out, the grandchild of this Dweller wasn't too happy with this. So they hopped their happy ass, and those of some allies they had made, onto an old tanker and came out here, disguised as one of us.

They apparently had some words with President Dick Richardson, may have even shot at 'em. But whatever went down between those two, the Tribal, or "Chosen One" as their folks called them, with the help of their allies and a traitorous squad of troopers, set the place to self destruct.

As they were making their way out, they came face to face with Frank. From what i've heard, the showdown was rather intense, and Frank, overconfident prick he was, lost. From what I hear, the duel tore him in half, though, perhaps due to pure stubborness, their augs, and whatever the fuck the FEV did to him, he managed to crawl his upper half forward and taunt the "Chosen One" one last time before his head popped. Then the rig blew up, and good riddance. If I ever meet this Tribal bastard, I'm gonna buy him a few rounds for doing the Enclave a favor and putting down that mad dog.

This is Captain Blackwood, signing out.