Few people alive today know of the secrets of the Bosmer, of their ancient rituals and disturbing legends. Able to shift from man to beast and never able to return, the tale of the Wild Hunt is a deadly and dangerous story for the Bosmer. Very few speak of it, as it is a taboo subject in most tribes, and some even say that the children of Hircine are destined to become monsters like those of the Hunt.

You are one such child, a kinsman blessed by Hiricine himself in a dream many moons ago. Your first change came quickly, consuming your mind and soul, causing you to terrorise your home village and slaughter your kin. Shunned and exiled, you travelled across the world into Skyrim, lost and unworthy of Hircine’s title.

Why you came here is unknown but the taste of blood remains on your lips... The need to hunt consumes you, the desire to feel sinew snapping beneath your jaws is becoming impossible to ignore. You are Hircine’s Child and it’s time for you to kill... Hircine’s Child is my answer to a growing lack of unique werewolf builds upon the site. While many focus on augmenting and powerhousing your way through meaningless enemies in wolf form, this focuses on truly fully embracing the beast and using it to our advantage in battle. With the Cursed Ring of Hircine, transformations are random and deadly, a hefty reminder of what the child was born to be. You are no mere Bosmer, nor a simple hunter – You are the apex predator, the ultimate killer, the top of the food chain.

Combat is swift and deadly, with Hircine’s Child able to switch into three different combat modes with terrifying synergy. From the sneaky archer of the forest, luring targets together with the noise of only the wind... To the dual dagger duelist, slicing through measly targets and absorbing their souls... And finally, the terrifying and hulking werewolf, surrounded by his fallen foes, now arisen with the help of the Ritual Stone and the dark art of necromancy.

((Disclaimer: This build is designed to be playable on vanilla Skyrim, however, it was tested on PC with many mods installed. If I have missed something, please let me know!))

Race: Bosmer, as it fits the lore regarding the backstory of this character. Bosmer also get a boost to Archery and Sneak, two vital skills for us, and their Command Animal power is handy in a pinch. 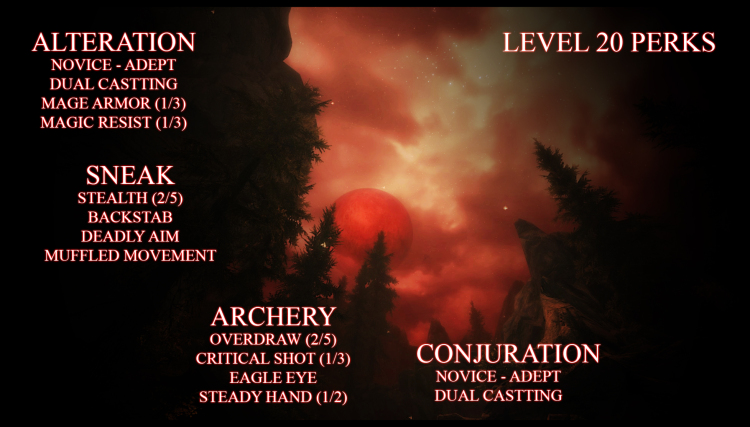 Alteration: The most useful skill to Hircine’s Child is the art of Alteration. Why? Simply put, it gives him the protection he needs IN and OUT of his lycan form. For example, with Ironflesh and two perks of Mage Armor, we’re getting 200 points of AR. That’s more than most untempered armor sets! On top of that Detect Life/Dead will be quite useful outside of wolf form.

Conjuration: Necromancy is a very delicate school of magic to experiment in and quite an unusual skill for a werecreature to take. But why should you get your hands dirty when there are minions to raise instead? With two zombies, a dog, and yourself, no one else stands a chance when you crash a party!

Lycanthropy: A quite obvious skill and the most important for us to max out early on. Your werewolf form is something you spend quite a lot of time in, both voluntary and forced.  There isn’t much to say on this, as this is quite easily the simplest skill in the build, but simply get Savage Feeding ASAP. It will save your life!

Archery: This skill is quite critical to the build and fits our Bosmer pretty well. Shooting hard and fast is our aim, as we are unarmoured, and take out the biggest baddies first. Power Shot and Quick Shot is a deadly combination, making archery a dangerous game to play when this guy.

Sneak: Sneak keeps this guy in the shadows and gives him what he needs to survive. From a roleplaying point of view, this fits rather well as werewolves are hunters of the night AND Bosmer are said to be able to melt into the trees and disappear from sight. Silent Roll and Silence are my favourite perks, being able to sneak fast is always a good idea. Shadow Warrior is also great but I did not take it as I found I could sneak well enough already without it.

Smithing: This is only perked for improving our hunting bow (and because Albino said so :P) 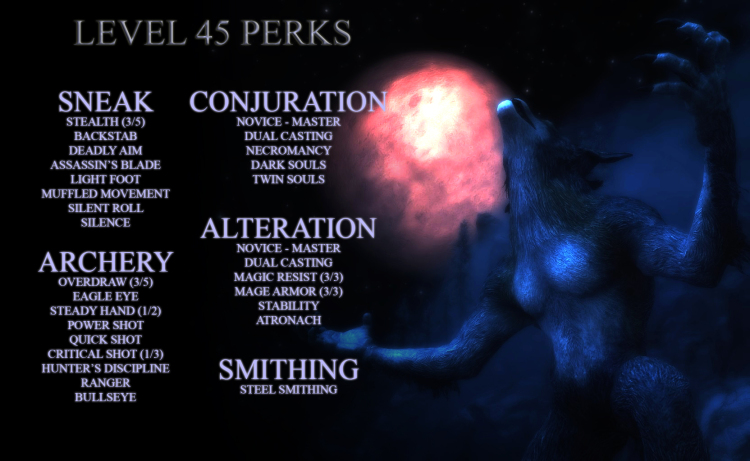 Ring of Namira and the Cursed Ring of Hircine

Bow of the Beast – Hunting Bow with Frost Damage

As you can see, this is quite an interesting set of gear and very easy to get! The aesthetics look amazing for a feral beast and suit Hircine’s Child quite well! Footwraps are on you at the start of the game and can be kept from there. Ragged Trousers are more limited but can be found on dead werewolves/werebears and these are plentiful during the Companions questline. I was unsure about using gauntlets and I consoled in my Arm Bandages for mere looks. Keep all of this gear for later and then capture some souls to enchant a bit later!

Now, your jewellery is a tricky one. I have already explained how the werewolf stacking glitch in another build of mine so read that link on how to get the exploit running. Stack them up and you’ll get forced transformations from the Ring of Hircine AND able to feed on the dead. The only bummer is that you will have to reequip them every time you turn so if you only wish to wear Namira’s Ring, that’s fine. Kyne’s Token just looks awesome and reduces animal damage and increase bow damage. Fun fact – You do NOT have to do Froki’s quest, just, ah... Lose control.

Finally, your bow. Hunting Bows are very available from the start of the games and are ridiculously easy to come by. Plus, they look great with our final set of clothes! Enchant one with Frost Damage whenever you feel ready.

Playing Hircine’s Child requires very little set-up to get going and this is possible one of the easiest builds to get up and running – I had everything before Level 10! The build is perfect for a relaxed play through of Skyrim, without worrying about acquiring a certain set of gear or weapon. The only thing of importance I found was to push to get lycanthropy ASAP by heading to Whiterun and running through the Companion’s questline and obtaining the Cursed Ring of Hircine.

You may ask, why Cursed? In my defence, I blame Skyrim’s lack of lunar transformations and the lack of true bestial nature in a lycanthrope. With the Cursed Ring of Hircine, you never know when the beast will come out. It gives Hircine’s Child a true reason to lose control and to ravage Skyrim! I achieved having the Ring of Namira through the werewolf chat glitch, only needing to redo it whenever I spontaneously transformed.

Combat comes in three different flavours – The fast-cutting dual dagger-wielding warrior with zombies at your beck and call, the stealthy and sneaky archer with a simple but effective hunting bow, and finally, the vicious and brutal werewolf, who is able to take down enemies before they know what hits them! Every encounter in combat is different – You are never going to know what you may need but the most important thing is to assess the situation. Drop into a crouch and sneak

Are there archers from afar? Sneak within striking range and show them your arrows. Summon a werebear nearby with Bones of the Earth for extra scare tactics! 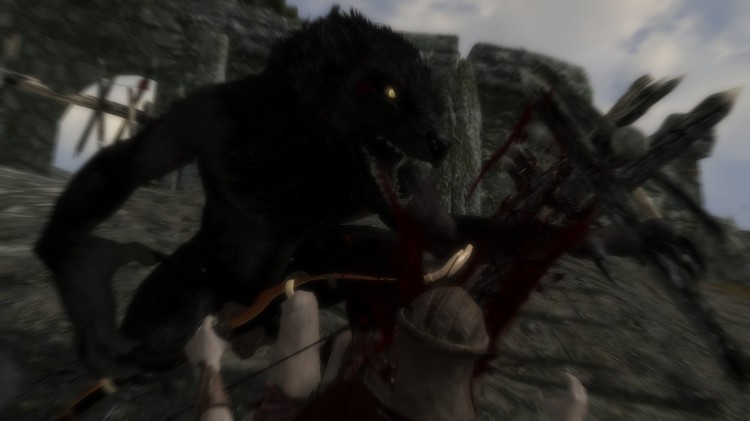 Is there a group near an area you need to pass? Draw your daggers and slice them up before raising a zombie or two to move on to the next foe. Make sure to sneak attack those ahead who haven’t seen you!

Or is there a boss with minions? Call upon the moon and show that squishy bandit who you are by tearing their flesh from their bones and crushing their windpipe!

Even dragons are no match for a werewolf! On Master difficulty and with all werewolf perks, it took me less than thirty seconds to take down the Frost Dragon who landed beside me, before I moved on the raise raze Dawnstar. While overpowered in beast form, this guy is extremely squishy (as in, jellyfish squishy) when he is not. Cast a flesh spell at every opportunity to not only raise the skill, but to also prepare for any surprise attacks that could possibly put you on your ass.

While not quite the same warfare tradition of the Bosmer, this special tactic is one of the powerful moves of Hircine’s Child. After protecting his flesh with an Alteration spell, he shouts to the heavens, bewitching the nearest animals to do his bidding, before he transforms into his lord’s chosen and strikes fear into the heart of his enemies. Summon extra werewolves for more carnage!

With the ranger perk and stealth up his sleeve, Hircine’s Child can shoot through enemy armor with ease. Along with the Marked for Death, it'll not only lower their AR, but it's a truly a deadly and exciting maneuver! 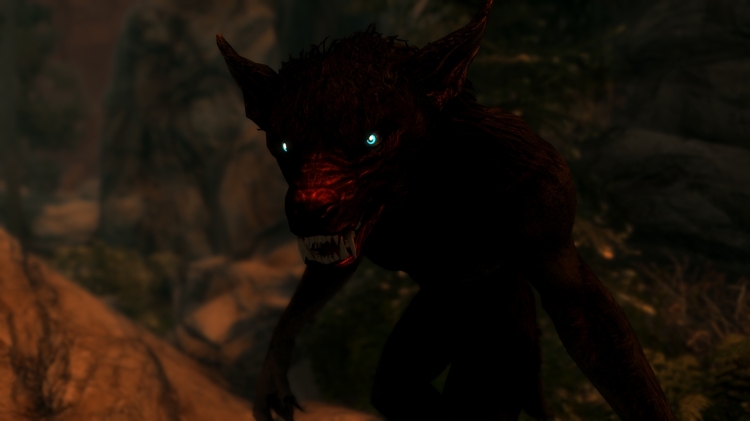 Hircine’s Child needs very little quests to set up and can fit most factions through trickery, lies and deceit. Hell, I started doing the Dark Brotherhood and Dragonborn main questline out of fun! You will also want to do any quests that result in murder, protecting nature or assisting werewolves.

Finally, this guy is out! I would like to thank the Skype folks (Albino, Brewmaster, Teccam, Curse Never Dying, Elysium, Twisted and all the rest) for assisting me and motivating me to pump this guy out. Extra cookies to Curse for the lovely perk spread. Enjoy!