139
4
Note to the reader - this is a build I posted back in 2012 to the old SkyrimBlog on an old account. Talk in the discord got me thinking that I never shared this on this site yet so come along and take a trip back in time. Tried to recreate the format I had ... copied from the wayback machine! Note this was posted before the Ebony Blade got fixed - it's that old.
The Japanese-influenced weapons and armor as well as reading about the history of the Blades really got me thinking about doing a unique play through that could revolve around certain gear. Along these lines, I have never completed the Daedric quests, nor have I tried an approach towards a Warrior build, mostly sneak archers or illusion mages. But no more! Here is my first try at a build here at TheSkyrimBlog... 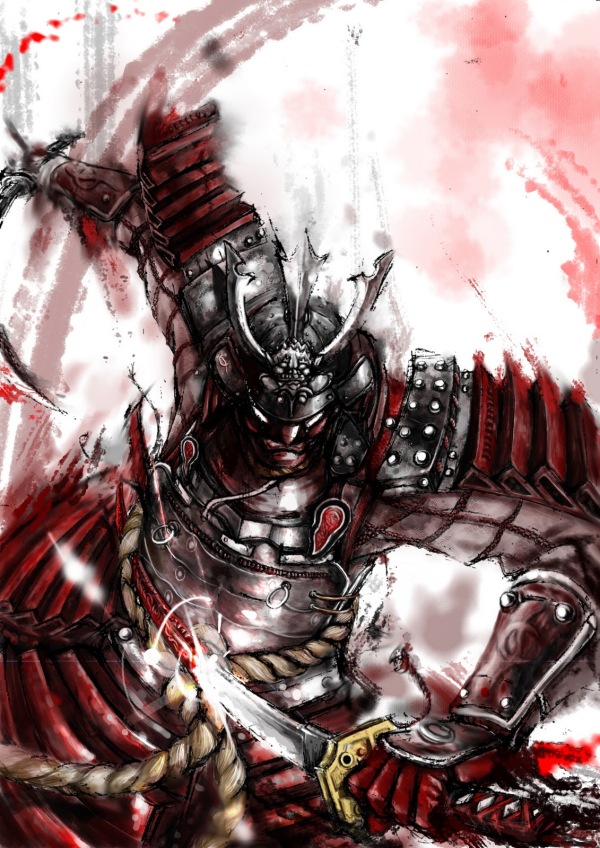 This build is a play on the old Dragonguard warriors from the land of Akavir who hunted down dragons and eventually invaded Tamriel to pursue the dragons that had come to Skyrim to escape persecution, eventually becoming the Blades. Equipped with the Akaviri inspired (Japanese themed) weapons and armor, The Akaviri Bloodlord himself is a Dragonborn, and is determined to hunt down any dragons that stand in his way and his quest for power to harness their souls. Being a Dragonborn himself, he continues to discover the power of the Thu'um to eradicate the ancient Draugr and Dragon Priests. The secret to his abilities are the enchanted masks of the Dragon Priests to overcome his enemies and is continually searching for all of them.

The Akaviri Bloodlord's frenzy for power and bloodlust has gained attention from some of the more nefarious Daedric princes who have pledged to aid him in his quest. He uses various Daedric artifacts to assist him in battle and to keep him alive by absorbing the blood essence of his foes … or allies. The key to this build is the Absorb Health enchantment. The build has Restoration as back up for the conclusion of battles, but during fights it is essential to keep weapons drawn at all times, whether it be The Ebony Blade to absorb health or both dual katanas enchanted with absorb health. The build is based around 2 primary combat skills, as some situations call for different weaponry. The Akaviri Bloodlord is a master of both styles, Dual Katanas and the feared Ebony Blade (dai-katana).

The way to survive is to fight faster, smarter, and with more bloodlust.

Standing Stones: The Lady, The Lord, The Warrior Stone

Marked for Death - Weaken the opponent's life-force, making it easier to absorb their power and defeat them.

Slow Time - Through heavy frenzy, the Bloodlord is able to move faster than normal warriors, making slaying of his foes easy work.

Whirlwind Sprint - As well as slowing down (moving faster than most warriors) the Bloodlord is able to have surges of speed to topple his more powerful enemies.

Elemental Fury (optional) - The Akavir can use exceptional speed to swing his dual katanas to cut down his foes. Due to enchantments however, Elemental Fury may only be used until the Absorb Health enchantment is attained, as you cannot use this shout with enchanted weapons.

Ebony Blade - The focus of the build. Using this Daedric artifact, having the appearance of Akaviri influence, the Bloodlord is able to sustain longer battles by absorbing the blood and life force of his opponents.

Blades Swords (Katanas) - The backup to the Bloodlord's primary weapon. Dual wielding these Akaviri blades will make quick work of any remaining enemies and can rend the hard scales of dragons as well as create an unstoppable whirlwind to defeat the feared dragon priests.

***The key to these weapons is to enchant both with the Absorb Health enchantment. This mimics the effect of the Ebony Blade and stays true to the way of the Akaviri Bloodlord, taking the life force of his enemies.***

Blades Armor/Ebony Mail - Whether it is wearing the Akaviri inspired Blades armor, enchanted to boost his power, or protecting himself with Daedric artifacts such as the Ebony Mail to further weaken his enemies, the Bloodlord stays true to a frenzied warlord and protects his essence with heavy armor for maximum protection.

The true power for this build. Notable masks:

Hevnoraak - Giving immunity to both disease and poison.

Konahrik - The mask gained after the collection of all 8. This mask allows for the wearer to heal quickly when injured and to weaken his enemies.

Obviously it is smart to stay towards the Heavy Armor influenced masks for armor rating boosting perks. Other headgear may be worn before masks are attained. Notable ones would be Helm of Yngol, Masque of Clavicus Vile, or the Samurai Armor Mod if on PC. (I am on Xbox 360)

Two handed - The skill boosted through use of the Ebony Blade. The key here is to allow the one handed skill to determine the blade's damage while using two handed skills for sweep and decapitation.

One Handed - The primary damage booster for both dual katanas and Ebony Blade. Dual wielding perks taken for quick attacks as well as stamina reducing perks for power attacks, effecting both one handed katanas and the unfortunately bugged Ebony Blade.

Heavy Armor - The way to protect the Bloodlord, boosted by enchanting.

Smithing - To increase both armor protection as well as the sharpness of his dual katanas. The Ebony Blade cannot be upgraded.

Restoration - The Bloodlord can heal himself quite well, but not during battle, as well as recharge his health when dangerously low. The use of the Avoid Death perk acts as a last resort if faced with an onslaught of foes.

Enchanting - Absorbing the blood and life-force of his enemies, the Bloodlord can harness this energy to power both his armors and weapons. 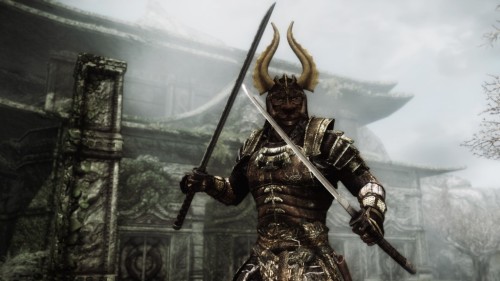 The Akaviri Bloodlord lends itself to a Vampire play through, which could be possible, however the character and build was not intended to be a demon in any sense, but more of a blood thirsty warlord obsessed with the acquiring of more power through blood and life energies. Necromancy is also a possible path, but wanted to leave a little wiggle room with perks and skills, as you may have noticed the build is only built up to level 40. This can leave to archery, conjuration, or maybe some blocking when using 2 handed. No thief skills allowed, as the Bloodlord is in no way a covert attacker, and will always stand ready and open for war.

This is my first build and am surely open to suggestions, changes, or really anything! I have always been intrigued by the Akavir lands and races/people and I hope to see some sort of DLC that addresses it, which this build would fit in great. If my lore is off in any way, please let me know. I understand that the Akaviri warriors were not in any way blood thirsty or evil (maybe?) and this is just one interpretation of a warlord gone power crazy. I am in NO WAY an expert on lore, but I am always willing to learn and have been trying to read as much as I can on both this site as well as the Imperial Library. I would also love to keep adding and editing this build to tailor needs or even more special additions, such as special moves. Thank you so much and looking forward to progressing in this play through.