Ancient tales tell of a mutinous first mate and the successful ousting of his captain, spurred by greed and petty spite. Ancient tales tell of a glorious treasure found on an isle that can only be found by those who already know where it is. Ancient tales tell of the reward for his betrayal, a terrible curse afflicted apon him and his crew, their flesh falling from their bones and their subsequent fall into undead lunacy. Ancient tales tell that although the crew succumbed to this fate, the firt mate refused, and that he still sails the seas, upon a ship as black as night, looking desperatly to end his curse, and that he leaves no survivors. Many seafarers see this as a fairytale, a ghost story to scare young shiphands into obedience to their captains. Many choose to ignore the ghost stories. Well , you best start believing in ghost stories my friend... you're in one. 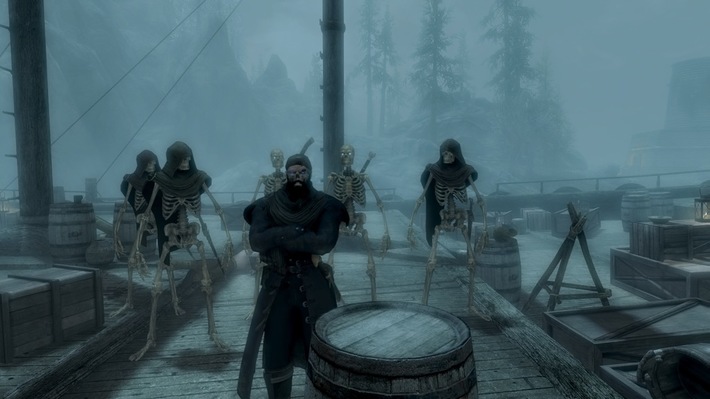 Hi guys and gals, welcome to my entry to the contest and my first ever build here! I decided to go full on stereotypical evil pirate for my entry, inspired by my personal favourite villian of any movie(at least in the first movie :P) , the legendary Captain Barbossa. This build is playable on any difficulty and was tested on legendary.

Keeping this in mind, I had three goals for this build:

Born to poor dockworkers in the first era in the port city of Anvil, The Dead Tide got his sea legs at a young age. Seeking to escape his life of poverty, he joined the Imperial Navy with the promise of a better life at sea. While he enjoyed his time in the navy, it was not at all as glamorous as he had hoped, he looked at the luxurious quarters of captains with jealous eyes and knew that even with a lifetime of loyal service, it still would not be his, unless he did a bit of "extra work" and as such developed a habit of theft, both from the navy and from anyone unfortunate enough to be in his crosshairs. Stepping up his game, he began smuggling and selling large shipments of imperial owned supplies to criminal gangs overseas. During his service however, the thrassian plague was unleashed upon Tamriel by the sload , and in response, Bendu Olo formed The All Flags Navy.

The young sailor was naturally, conscripted into this navy and sailed to the mysterious Isles of Thras, where he and his peers slaughtered the sload and drove them to near extinction. The captain he served under however, did not return with the rest of the navy, as he had heard rumors of an isle off the coast of Thras, said to hold the great treasures and artifacts of the sload. Being a fair and honest man, the captain promised a fair share between the full crew, and rallied them to find the mythical horde. After weeks of grand tales and promises, but very little progress, the crew was losing faith and the young sailor had had enough of empty promises. Using his modest wealth from years of smuggling, he bought the loyalty of the crew, and in the middle of the night they stormed the captain's quarters, tied him up and left him marooned on a small patch of coral far out at sea. The young sailor found he had a natural talent for leadership and after a few days of searching, found the mythical vault of the sload. After infiltrating the seaside stronghold of shipwrecks, ocean predators and magical traps, the crew found gold and powerful necromantic artifacts beyond imagining. The sload however, were renwoned not only dark, evil magics, but for being unbelievably stingy, a lesson the crew soon learned after taking their loot and discovering the terrible curse the sload had placed on it. For years they were parched of thirst and unable to quench it, for years they were starving to death,and didn't die, food turned to ash in their mouths, and they felt nothing, not the wind on their face northe spray of the sea. Nor the warmth of a womans flesh. They were compelled by greed and now they would be consumed by it, and as the flesh slowly fell from bone, the crew gradually lost their minds, all but one. Slowly, rumors began of a ship with pitch black sails that plagues the ocean, a ship that releases a torrent of shambling undead maruaders, a ship that doesn't leave any survivors. But one has to wonder, if they leave no survivors, where do the stories come from? 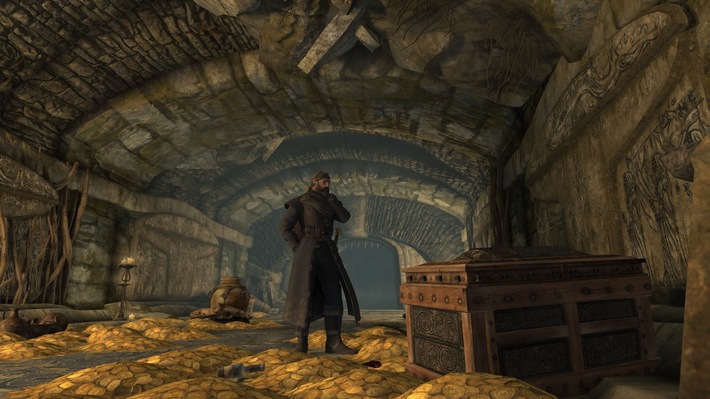 Now the once young sailor has come to Skyrim, in search of a band of powerful necromancers said to possess a black pearl with untold power. He hopes to use this pearl to finally save him from the madness he has barely kept at bay for centuries, and to protect the shattered remnants of his mind.

Live Another Life (Came to Skyrim by ship)

Born in Cyrodiil and serving in the greatest naval force Nirn has ever seen, The Dead Tide knows what his people are capable of and is proud of it. With Imperious, this will give The Dead Tide the following abilities:

These passives are great for this build as discipline helps make your minions even tankier while demonstrating The Dead Tide's knack for leadership, and the combination of Imperial Virtues/ The Human Spirit does a great job of boosting your survivability

In the early game, while you are still building your crew, I recommend the steed stone as it helps you store an infinite amount of bones and as they weigh a lot, that is a huge help.

With Andromeda the steed stone gains the following buffs:

When you get your greasy hands on the atherial crown however, I recommend storing the steed and switching to the shadow stone, for added combat and stealth effectiveness.

With Andromeda the shadow stone gains the following buffs:

The Dead Tide doesn't cast spells but magicka is used to increase our skeleton count. Stamina is also needed because while being able to deal good damage, this builds damage comes from fast, successive attacks with stacking curses, instead of meaty attacks, so staggering enemies is essential for one on one fights. Health is good because while being "dead" we still need to live, don't we? 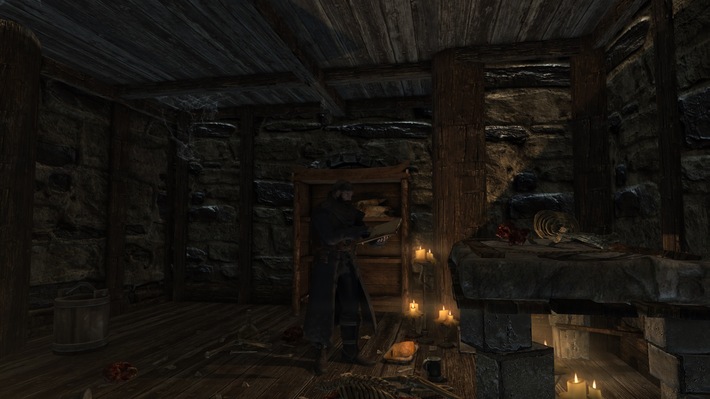 "Huh. Guy is a complete loon after all. Still, at least he has good materials"

Thieves Guild: A great way for our pirate lord to let off some steam and engage in one of his two favourite pass times:Theft. His skills and goals naturally align him to this guild, but he doesn't get the no kill rule, and won't follow it

Dark Brotherhood: Allows him to take part in his other favoroute past time: Slaughter. He doesn't really care about the night mother or sithis but all he knows is someone is paying him to kill people, whats not to love? (Also,use death's emperor here for tons of fun)

Blood on the Ice: Some loon is chopping people to bits? Sounds interesting. They have an amulet belong to the legendary king of worms? Very interesting.

Undeath: The end goal for this character, this is how he grows beyond his curse and becomes and immortal, unkillable, at least partially sane terror of the seas.

Rise in the East: It never hurts to squash the competition, so why not when given the chance to do so.

Generally any quests involving crime, money, pirates, the sea and necromancy are good for this character, and make sure you have an apple on you at all times to eat threateningly.

Not every perk needs explained, heres the ones that might:

Conjuration: This makes the build to be the baddass skeleton captain it should be, and will allow you to bind skeletons to your will.

One Handed: This is what enables the build to be a competant duelist, with emphasis on dodging and exploiting your enemies.

Enchanting: Using his experience with curses, The Dead Tide has managed to weaponise his own horrible curse and to apply new ones to his enemies, not a lot of perks worth talking about here.

Sneak: Whilst being a member of the undead, The Dead Tide is still a thief at heart and thanks to his mutiny knows the advantages of suprising your enemy. Remember, your crew don't need to always babysit you, feel free to leave them behind and go full Sam Fisher on everyone.

Pickpocket: Like said before, The Dead Tide still loves theft, and will use his theiving skills to place his cursed prize of sload gold in their pockets, subjecting them to his curse and stoking their greed.

Light Armor: The sea is not friendly to metal, and being a man of the sea and of theft, The Dead Tide appreciates lightweight leathers. This tree is designed to enable dodging and running away (I know, I know,not exactly the stuff of legend but it keeps us "alive")

Block: A very minor skill, only used to dodge and stagger 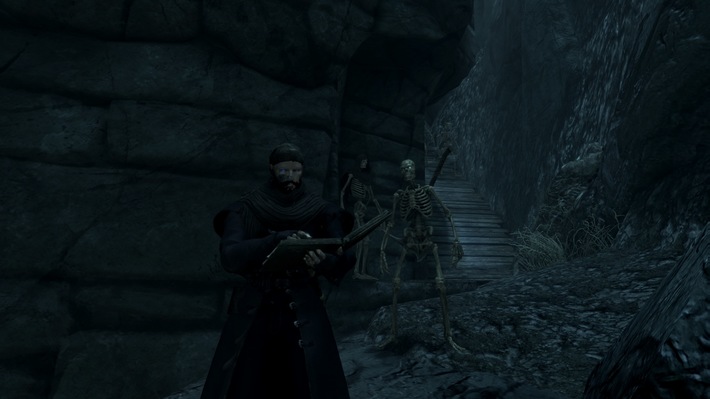 "Need to get a hat, a REALLY big one"

Use leather armor to start with, then move on to a mix of theives guild and dark brotherhood pieces depending on what you think looks good, don't bother wearing self enchanted armor as it probably won't be very good, and in terms of weapons try and get a scimitar from the dainty sload as early as possible

Wear the mourner's cap along with the wayfarers shawl and detlaff's coat along with a gold ring, rename them to pirate sounding names i.e. call the boots Landblubbers

Enchantments play a large role in this build and are what gives the build it's signature move, along with making it viable for legendary difficulty.

Moonlit Truth: Cast off your shackles and let your cursed greed sully those around you

Dread Duelist: Leave your cursed crutch behind and show them what real skill looks like

Pirate Charge: Catch 'em by suprise with a quick drop and roll then take off their head

Lay Low: Lose a fight and run away, live to gut 'em another day

The Dread Tide plays as a fluid mix of sneaky duelist/Evil Overlord and is a very refreshing and all rounder style of play.

You'll usually want to start combat in Dread Duelist stance, placing your cursed coin in someone's pocket, giving you the option to either gut them or use them against their friends. If you your enemy isn't pickpocket-able, start combat with Pirate Charge and then try and kite them while slicing at openings. Thanks to the enchantments on your sword, your strikes will get more dibilitating the more you land. If facing large groups, activate Moonlit Truth and try and whittle their health down as a group, making them more vulnerable to your fear enchantment. If it gets too hairy, use Lay Low to reset the fight and try again. If the enemy is targeted by your crew it would be wise to join them and slash the enemies back while they desperatly try to hold off the skeleton horde. 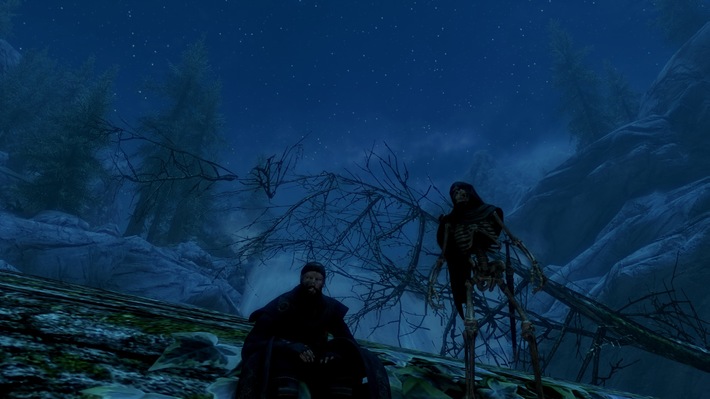 "Gotta get back on the sea some day"

Despite being based off of one of my personal characters, this took ages and has made me appreciate how much work and effort goes into making builds, and how much work everyone else on this site does. Thanks to Curse and everyone for hosting this contest, thanks to Ponty for his great character building guide and thank you for reading.