Hello everypony, and welcome to my next build. Without taking up too much time introing it, let's get to the nitty gritty. 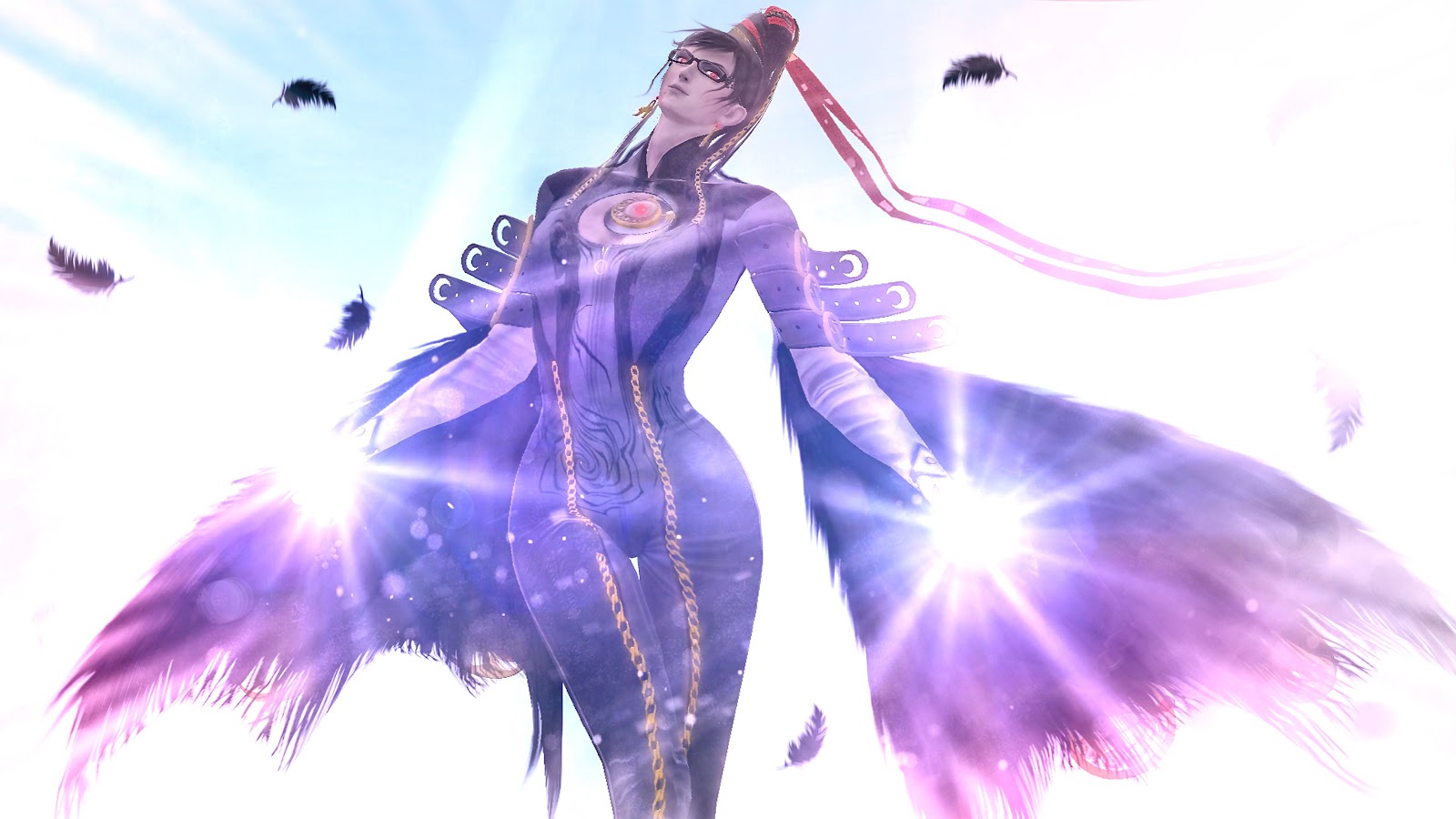 The Penumbran Witch is a fast paced, bolt spewing, magic tossing, occasional sword slashing badass with a keen fashion sense. With a mixture of some Extended Slow Time, found or bought potions, buttloads of Enchantments, and some style, you'll have your enemies not only stunned, but suffering from some serious cases of heartbreak, and rigor mortis. 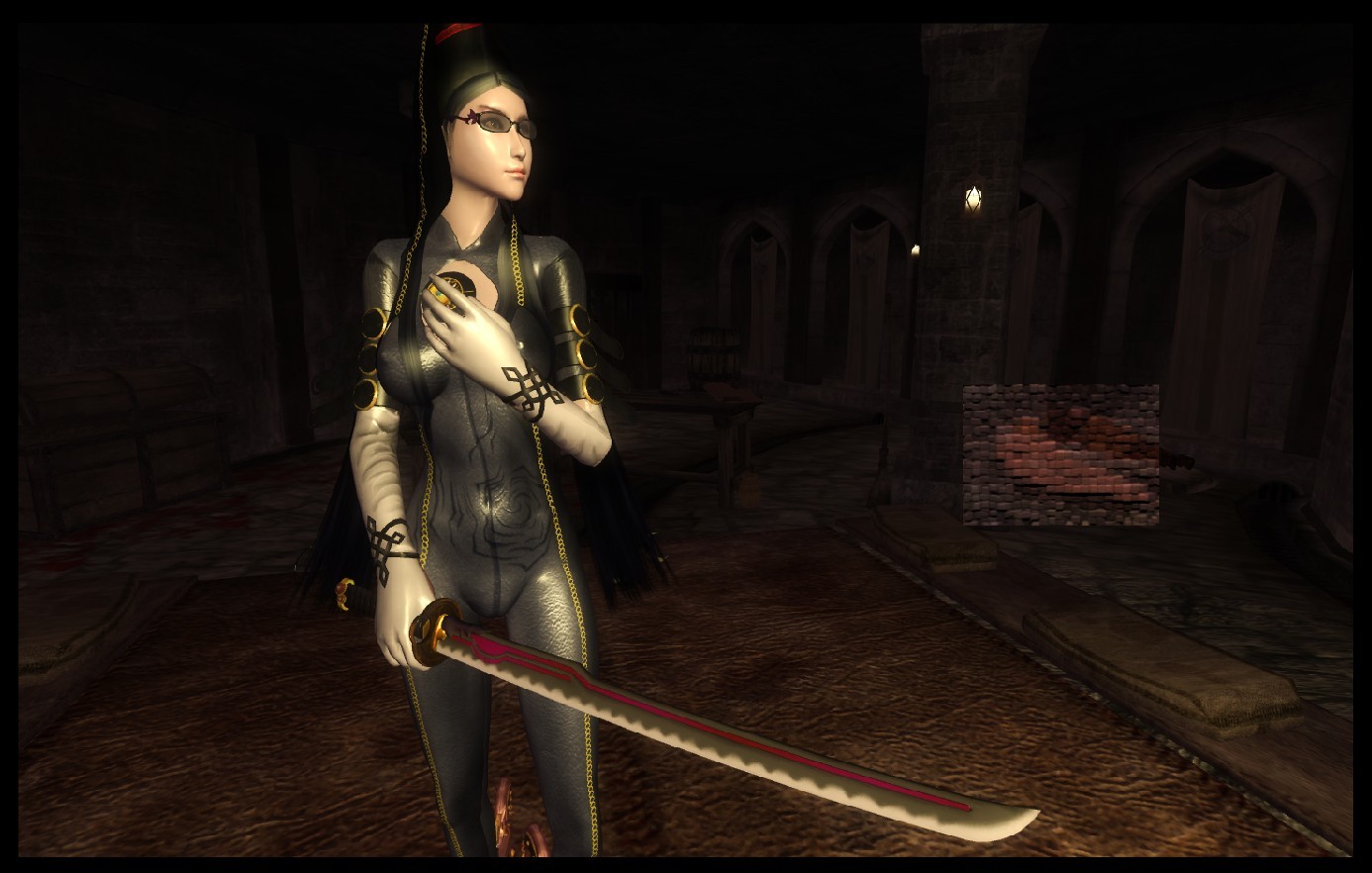 *Of Sorceress and Keepers*

Long ago, in the days of yore, during the reign of Reman Cyrodill of old, there were two groups founded. One, the mysterious and seductive Penumbran Sorceresses, served the Mistress of Sex, Secret Murder, and Spiders, Mephala, Queen of the Eight Shadows of Murder. The other, A Lightsworn Keeper, served Meridia, fallen Magna´Ge, enemy to all undead, Lady of Light, and Mistress of the Colored Rooms. Despite their opposing views, the two societies held a respect for one another. Both sought to shift the outcome of events in history to their own ends, but both believed in the Daedra, and were thus scorned by believers of the Eight, who would eventually become Nine. They only had one primary rule when engaging with one another. Both Sorceress and Keeper could never form a relationship, for it was said the child of such a union would bring destruction upon the land. 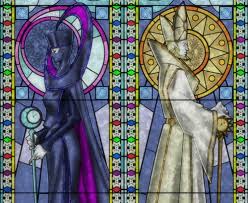 *An Outcast Among Kin* 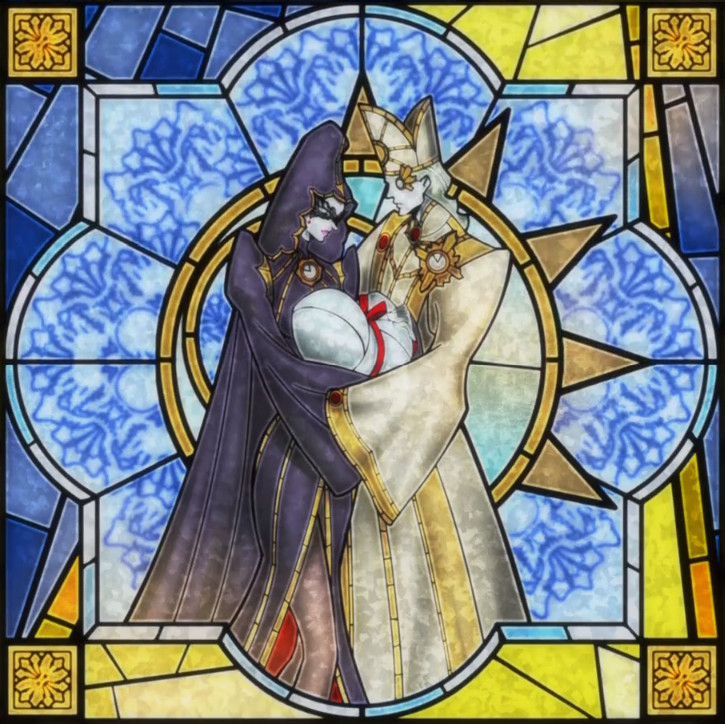 Unfortunately, such a fragile peace, like many before it, didn´t last. A high ranking Keeper, an Akaviri by the name of Beldain, and a Penumbran Sorceress, an Altmer named Roselynn, broke this pact, and sired a child. Bedywyr was stripped of his rank, and Roselynn exiled. Thier child, Sereiza, was trained, but treated as an outcast. War broke out soon after between the Sorceresses and Keepers, decimating both sides. The last of the Keepers, Karethys Maryon, a friend of Sereiza, sealed her in stasis, vanishing from history. Her mystic slumber would end centuries later......

*The Hunt for Truth*

The ages ticked by, until, during the 4th Era, Sereiza´s slumber ended. Awakening in a lost tomb, her memories fragmented, Sereiza took on a new moniker, Hanta, the Akaviri word for Hunter. Due to her mixed parentage, she was hunted by Daedric Worshippers outraged at her parentage, Vigiliants, for her connection to Mephala, for she had sworn a pact with the Prince, and the Thalmor, for her acceptance, though not worship, of Talos. She would hunt those that hunted her, and headed to Skyrim, seeking a purpose. There, she, in her weakened state, was captured, and sentenced to execution by Elenwen. At Helgen, she found her birth, whereupon Akatosh had thrust the soul of a Dragon into her bosom, coincided with the return of Alduin, the renegade World-Eater..... Race: Altmer. Not only does it fit with the lore, but they gain bonuses to Movement Speed, since they are the tallest vanilla playable race, and gain bonuses to starting Magicka, increased Magic Regen with Highborn, and bonuses to Conjuration, Enchanting, and Destruction.

Appearance-Make her pale. Give her short, black hair, and high cheekbones. Slide the weight slider all the way to the right. Give her the claw like tattoo, and change the color so it looks like an old, faded scar. Make it so she has a slight smile in the Mouth menu.

Standing Stone: With most of our skills being magically oriented, we’ll want to nab the Mage Stone to start off. Later on, once we have our magic skills at least in the 50’s, we’ll want to grab the Lord Stone, for some added Physical and Magical defenses.

All-Maker Stone: Once we nab the first Bend Will Shout, you´ll want to free the Beast Stone. That´ll allow us to someone a pretty sturdy Werebear to our aid in battle.

Stat Spread: We'll want an almost even 3/2/2 in Magicka, Health, and Stamina. You should stop perking Magicka around 350. The +50 staring bonus as an Altmer will bump it up to a nice 400.

Alignment: Chaotic Good, she isn't above using less than scrupulous methods to achieve her goals, but she does have some morals. 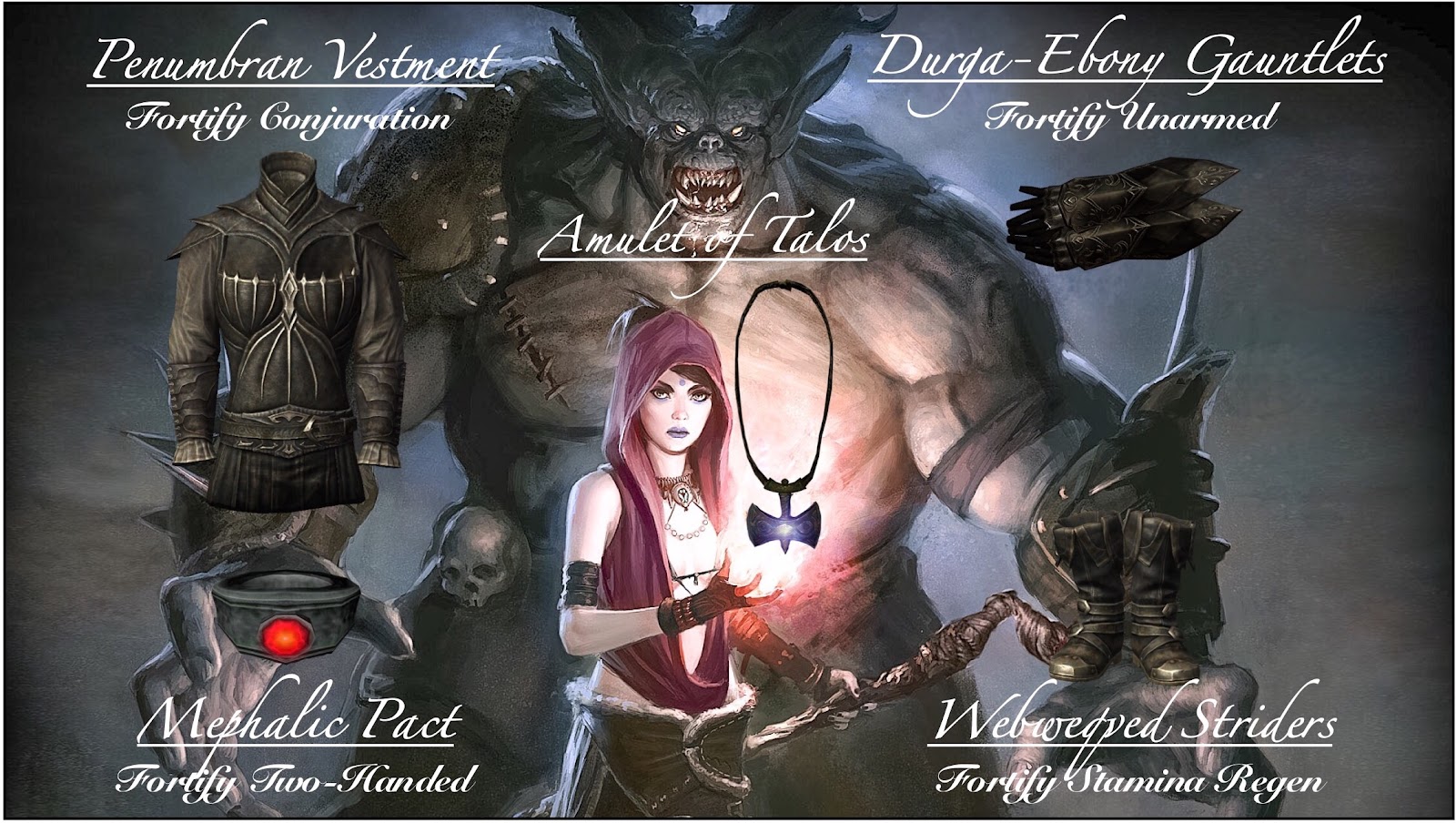 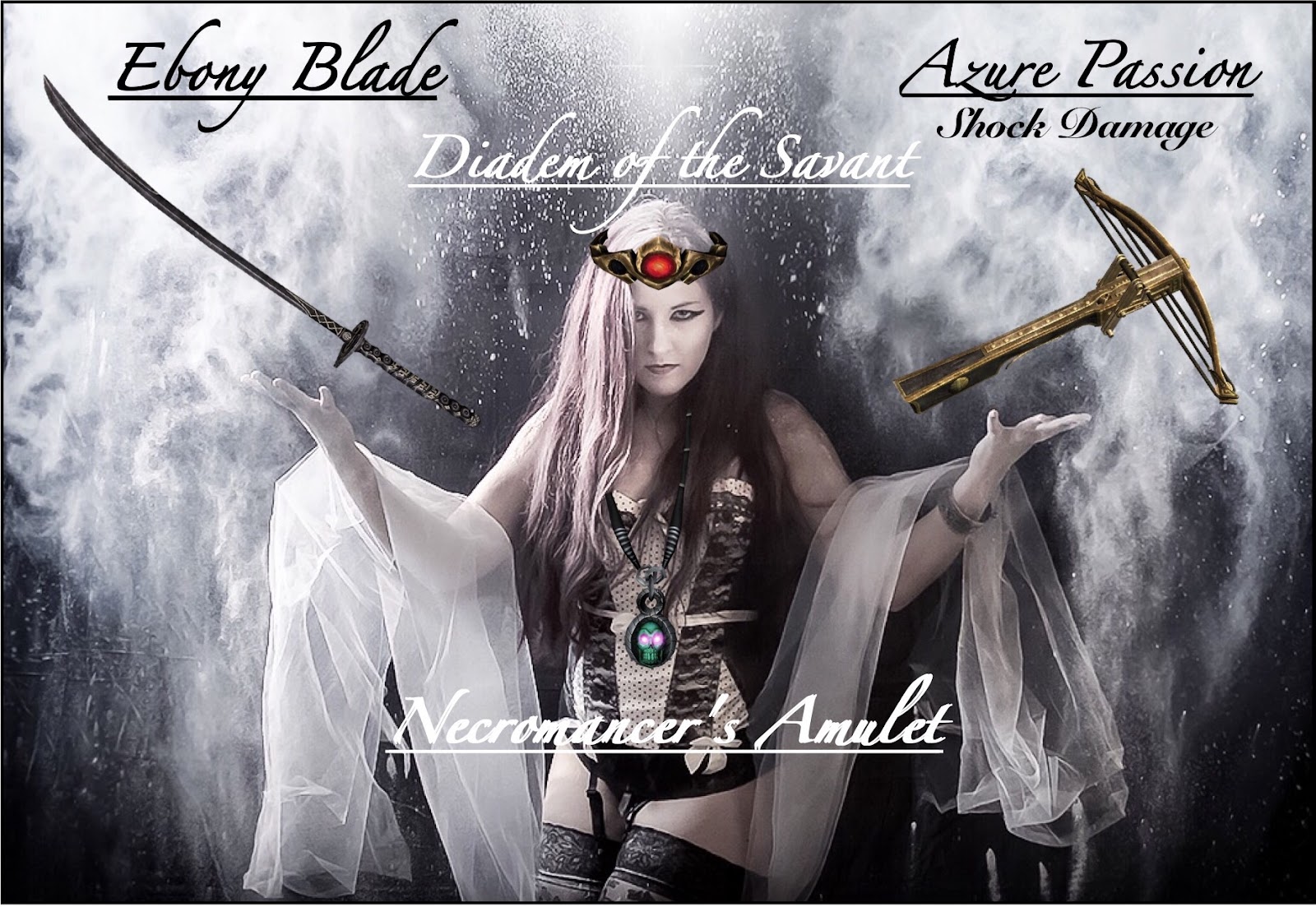 (In areas such as Temples or graveyards, I wore a simple Hooded Monk’s Robe, the tan boots that those wearing it use (Both can be found on the priestesses in the Talos Shrine Massacre), and simple Gloves) 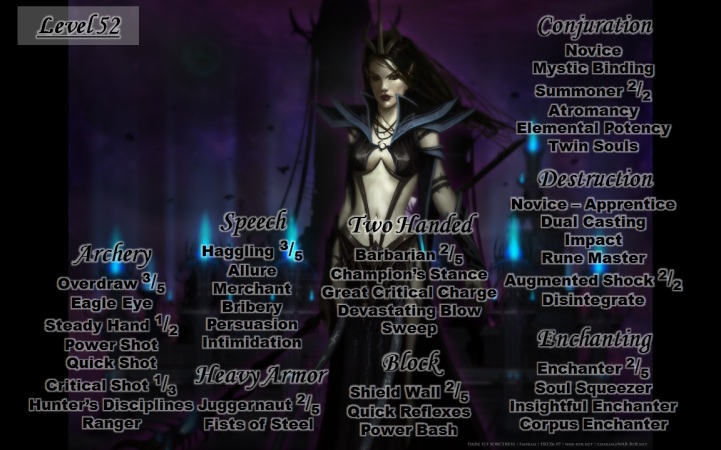 Once you leave Helgen with Hadvar, you´ll want to grab Faendel for your first follower, to begin training Archery for basically free. After that, you´ll want to run to Fort Amol, located in either the Rift, or Eastmarch (I can never tell where one border begins and the other ends), send arrows and Familiars into every mage there, and, head into the prison, lift the lantern from a basket in the corner, and claim your prize: A brand-spanking early Bound Bow spell tome!

If you play on PC or the XboxOne (possibly), then check out One-Handed Crossbows

Once that´s done, you should head over to the Rift once you reach level ten, and, if you have the DLC, head on over to Fort Dawnguard. There, you can get some Heavy Armor training from Isran (Much faster than just hoping your HA gauntlets get a few whacks from your enemies, in my opinion), as well as free bolts, an Amulet of Talos, and a nice little home away from home in Fort Dawnguard. Oh, and Archery training up to 90 once you recruit Sorine and Gunmar.

Now, once you reach around Level 18, you´ll want to do Dragon Rising. After that, head on into the Bannered Mare, and chat with Hulda. After a few rumors, you should get one asking you to investigate the Jarl´s strange children. Speak to Balgruff to kick of The Whispering Door quest. Complete that by pickpocketing the key off Farengar, and claim the Ebony Blade. I charged this sweet, health absorbing Daedric katana. The Ebony Blade, when coupled with Sweep, was used mainly against hard hitting foes, like Bandit Chiefs, alongside a summon or two, or against groups of enemies. I charged this beauty by killing the Dark Brotherhood, and I also added an extra point in the Absorb Health by killing two NPCs I had apparently befriended. This was, of course, accidental.

Archery, combined with summons, is used against enemies that are often far from you. This includes other archers, mages, or the occasional flying dragon. If you do not posses the DLC, then a Bound Bow, with its zero weight, unlimited arrows, quick fire speed, in conjunction with and fairly good damage, will do for this skill. Plus, free, weightless Daedric Bow with an awesome fiery blue look!

Unarmed is used in fights with either one strong enemy, or a bunch of weaker ones. Plus, punching your enemies to death is so fun. Marked for Death can help out with this, gradually lowering your enemie(s)´s armor rating until its little more than paper.

When fighting groups of enemies, preferably mostly melee users, then you should prioritize which enemies to take out first. Say you´re clearing out a cave, whether just for fun, or for a quest, and you come across the Bandit Chief, decked out in leveled Heavy Armor and wielding a nasty looking two-hander, and he´s flanked by two Bandits Outlaws, and a Bandit Maurader. I would recommend summoning your bow, as well as a few Familiars at the least, and taking out the Outlaws first, then the Maurader, and finally, the Chief. Even without perking it, using quick bursts of destruction spells to whittle down your enemies´ health is quite handy in tough fights.

On a side note, once you are abducted in your sleep after completing Innocence Lost, the only person in the room I killed, aside from Astrid, was Vasha, cause that dude is seriously messed up. 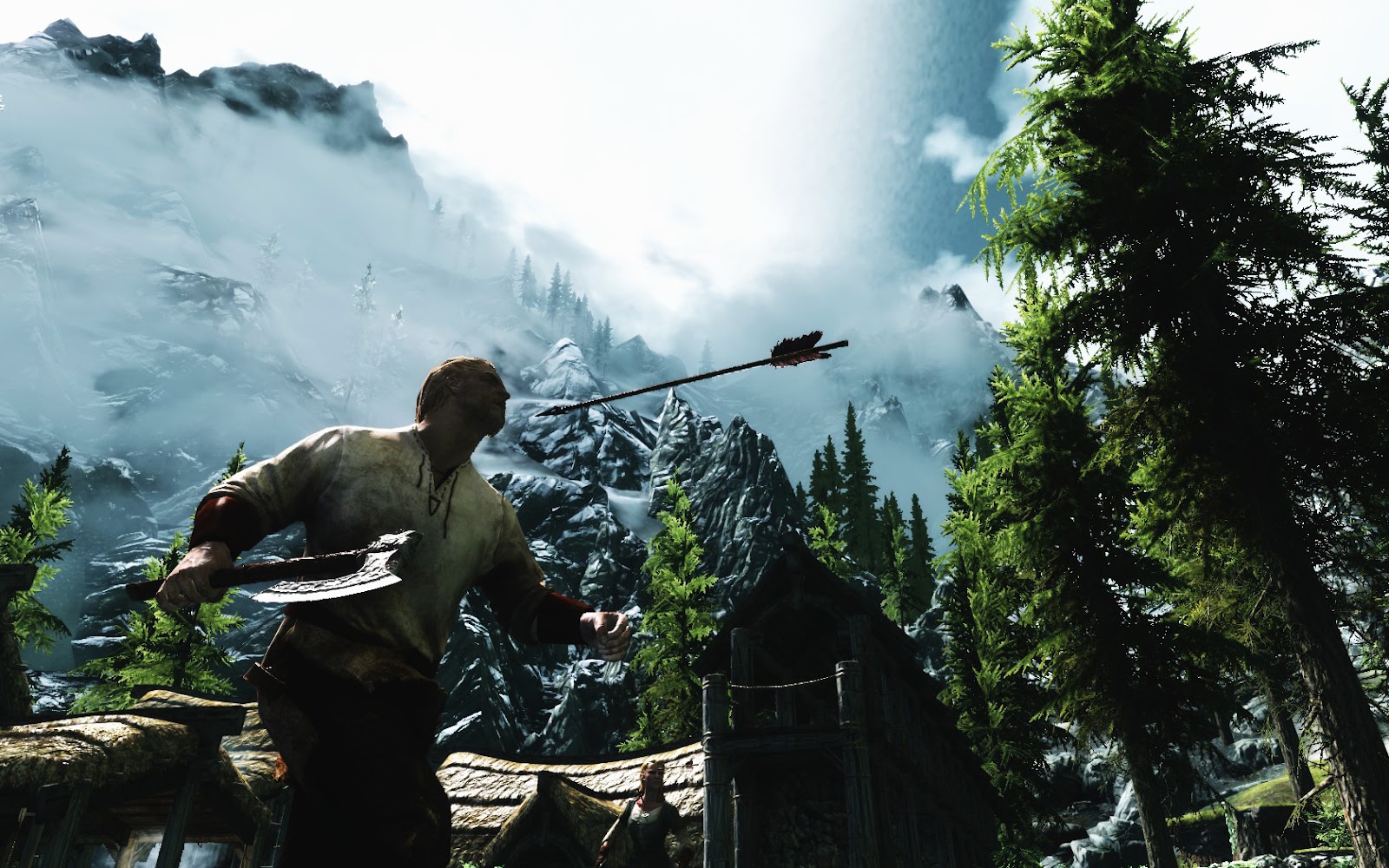 *A Guide to Extended Slow Time* 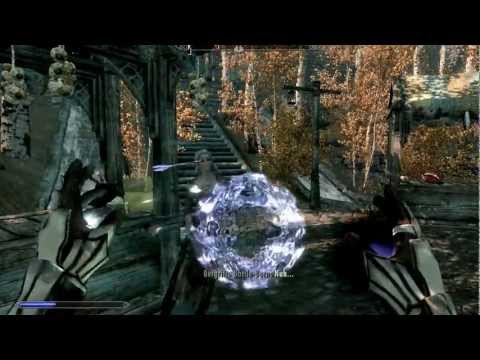 This is probably one of my favorite glitches in Skyrim. What this nifty little glitch does is allow you to extend the duration of the Slow Time shout.

What you'll need to accomplish this is:

Now, to execute this glitch, you must be a fair bit patient. Equip Slow Time as your Shout, and, as you cannot block with a bow or crossbow, you can only accomplish this with the Ebony Blade. Wait for a Power Attack, and, once the effects of Quick Reflexes start coming to a close, IMMEDIATELY activate Slow Time, after drinking a Fortify Alteration potion. Coupled with Stability, you can make Slow Time last at least a minute.

With this now in effect, you can either keep on swinging with your Ebony Blade, which has the swing speed of a one handed blade, or, if you´re quick enough, swap to your crossbow/Bound Bow, and launch a few arrows at your enemy. Or, if you prefer, go unarmed and start beating on your opponent(s). You can also use this evade enemy attacks, and look freaking badass doing so.

*Tactics of the Penumbram Sorceress

Boltic Climax-Using her mastery over chronomancy, the Penumbran Sorceress whips out Azure Passion, and fires off multiple explosive rounds. 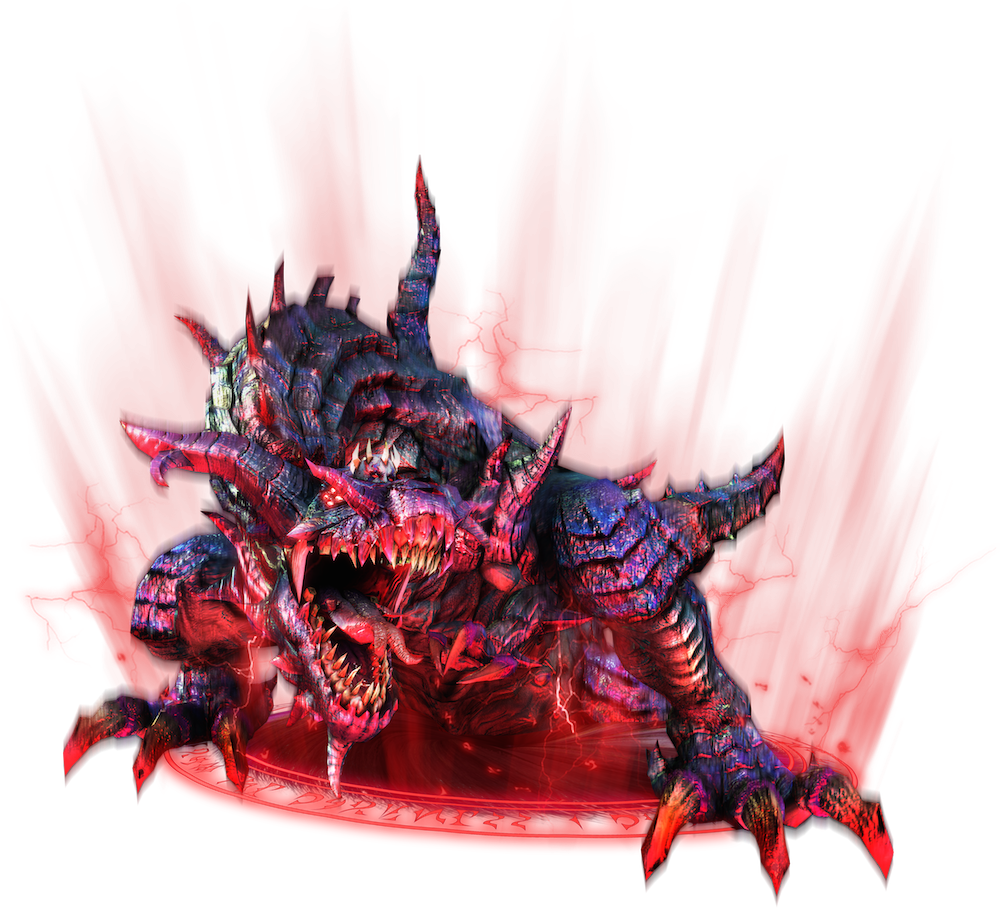 *A Ritual in Nightshade* 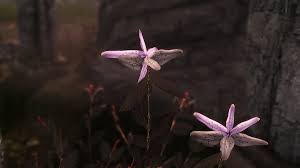 In order to channel a sliver of Mephala´s power through her, as was part of the pact, Mephala desires a sacrifice or two. First, the Penumbran Sorceress must ingest some Nightshade, sacred to Mephala. The second part, is that the clothes she wears, spun from Mephala´s threads, must be temporarily removed, as they are a conduit for the power. Once the spell has been cast, they may be put back on.

Thanks to Relycs for the image alteration, Equipment Spread. Thanks to Golden Fool for the Perk Spread. Also, thanks to Sega and PlatinumGames for Bayonetta, the sexy, badass Umbra Witch. Until next build, my fellow Vaulters!